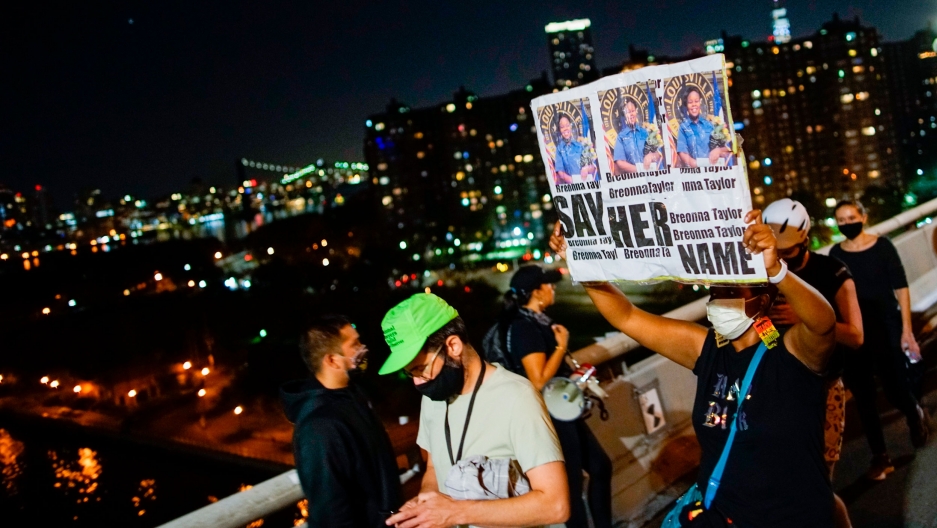 Demonstrators march on the Williamsburg Bridge during a protest following a Kentucky grand jury's decision on the killing of Breonna Taylor, New York City, Sept. 23, 2020.

Global eyes are on renewed racial justice protests in the US, with demonstrations again erupting in several cities around the country in response to Wednesday’s announcement by Kentucky Attorney General Daniel Cameron that the two officers who shot and killed Breonna Taylor in March would not be criminally charged with her killing. During the protests on Wednesday following the announcement, two Louisville police officers were shot and wounded. A suspect has been arrested and the officers’ injuries are not life-threatening.

Six months after the fatal shooting in Louisville, a grand jury decided only one of the officers, Brett Hankison, would be charged with anything — three counts of wanton endangerment for firing his gun toward another home that had residents inside. Cameron stated that the two other officers were justified in using their guns after Kenneth Walker, Taylor’s boyfriend, fired his weapon at them.

In addition to the brutal killing of George Floyd in Minneapolis in May, the Taylor case was one of the most high-profile recent examples of police misconduct that stirred mass marches against systemic racism and police brutality, as well as calls for reforming law enforcement. Civil rights attorney Ben Crump, who represents Taylor’s family, said the grand jury’s “sham proceeding” does not qualify as justice in the case.

Breonna Taylor, 26, was an emergency medical technician whose death came when police carried out a no-knock warrant at her apartment as part of a larger drug sting. She was shot six times before dying. Sgt. John Mattingly, who entered the residence after the door was broken down, was shot once in the leg by Walker — who has said he was trying to ward off an intruder. The officers fired a total of 32 shots in the incident.

Hong Kong police arrested Joshua Wong and a second pro-democracy activist on Thursday for having joined a rally last October. Though released several hours after being detained, Wong faces several charges, including one for violating a ban on masks that was intended to stop protesters from gathering. A new national security law imposed over the summer by China erodes freedoms of speech, press and assembly.

And, North Korean troops shot and killed a South Korean official allegedly trying to defect to Pyongyang before setting his body on fire out of fear that he had the coronavirus. South Korean President Moon Jae-in described the incident as a “deeply regrettable act that cannot be tolerated,” with his defense ministry urging punishment for the perpetrators. 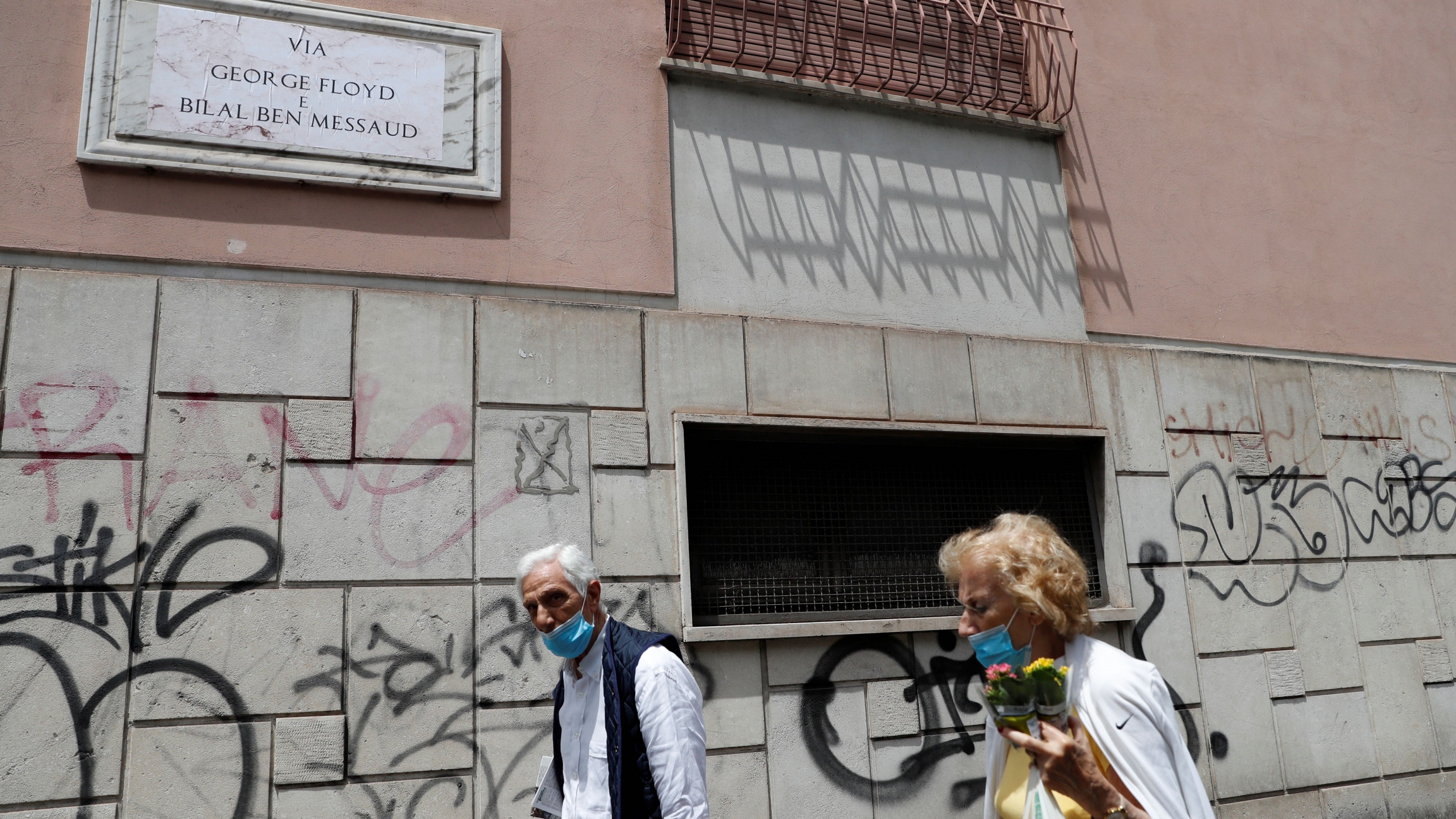 People walk near the former street sign for Via dell'Amba Aradam named after the Battle of Amba Aradam, when colonial power Italy attacked Ethiopia in 1936 — which has been replaced by protesters against racism with a sticker reading, ''Via George Floyd and Bilal Ben Messaud," to honor the death of Floyd in police custody, and migrant Messaud who died after jumping from a quarantined ship near Sicily, in Rome, June 19, 2020.

Willy Monteiro Duarte was born in Rome to parents from Cape Verde. He had just become an Italian citizen, and at 21 years old, was an aspiring chef at a hotel in a town near Rome. All of that ended Sept. 6 when he tried to break up a fight — and instead was beaten to death himself. 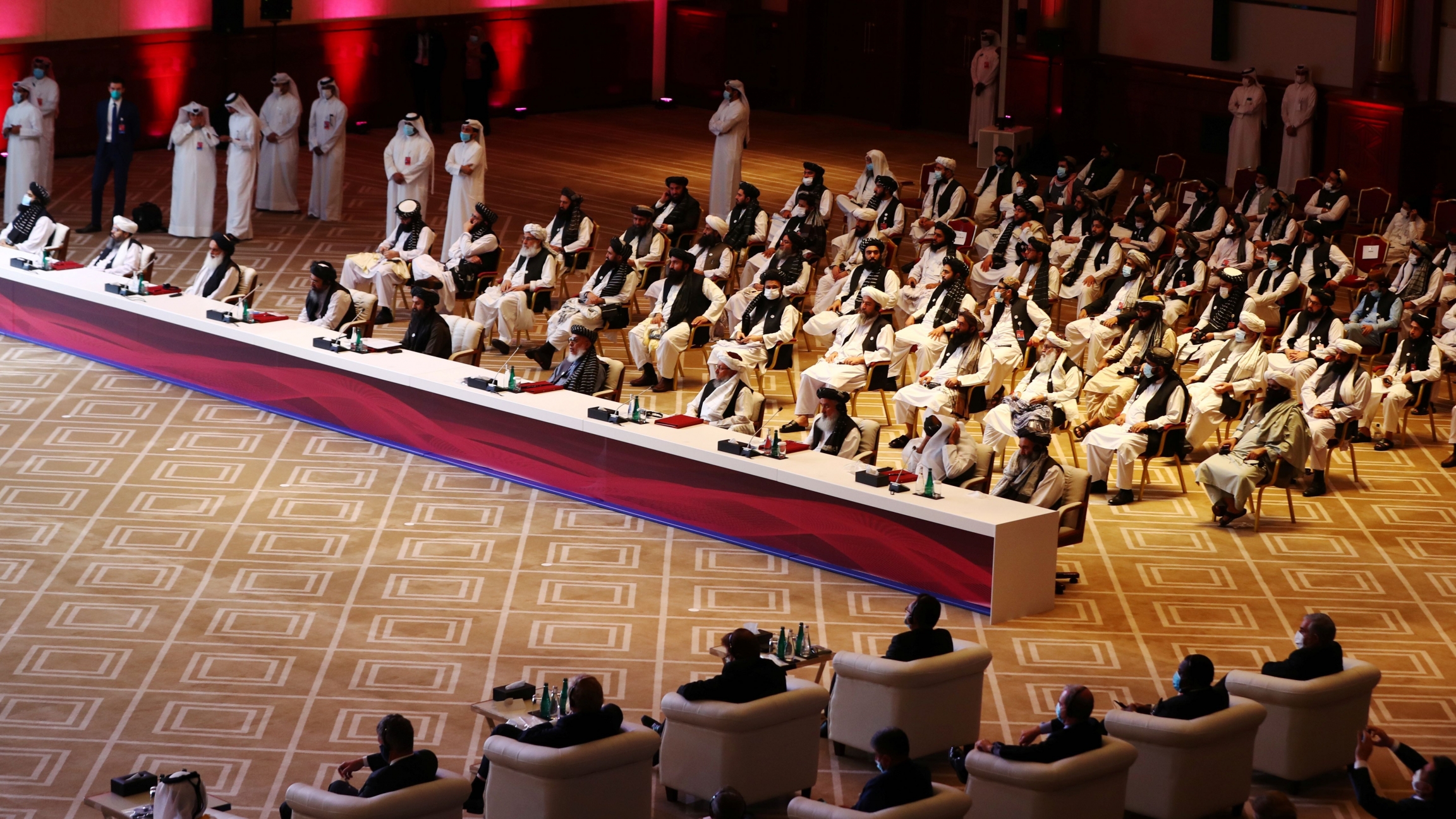 For the first time in two decades, members of the Afghan negotiating team are officially meeting with the Taliban to work out a peace agreement. Representing the government side there are only four women, who believe they carry a heavy responsibility on behalf of all women in their country.

For this young Latino, spending more time with family is an upside to the pandemic 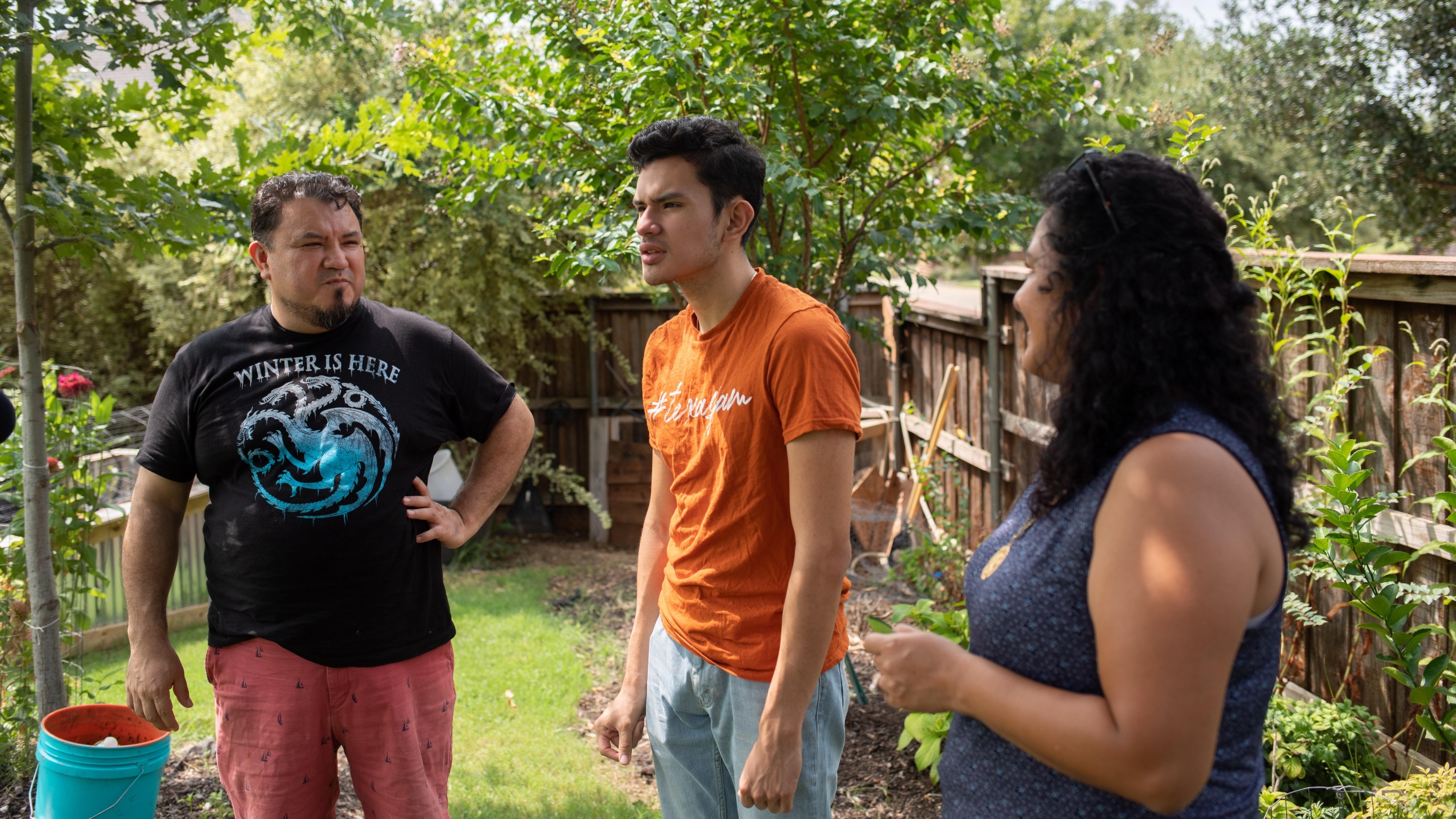 Izcan Ordaz, center, has been spending more time with his parents Simon Ordaz, left, and Xochitl Ortiz during the pandemic.

Izcan Ordaz, an 18-year-old college freshman, expected to move to campus for the University of Texas at Austin last month. Instead, he's taking classes virtually from home — and learning a lot more about his parents' upbringing.

Not known for his social media savvy, Sir David Attenborough has now joined Instagram. In the 94-year-old veteran environmental journalist's first post, which as of this writing had over 1.2 million views in under three hours, Attenborough (with the help of colleagues) uses the platform to warn that "the world is in trouble" and concludes by asking viewers to join him — or as he is more accustomed — "stay tuned."

David Attenborough has spent a lifetime travelling, exploring the wild places of our planet and documenting the living world in all its variety and wonder. He’s also witnessed the damaged caused. Saving our planet is now a communications challenge. We know what to do, we just need the will. That’s why we want to share this message on Instagram. Because there is hope and together, we can inspire change. Social media isn’t David’s usual habitat so while he’s recorded messages solely for Instagram, like the one in this post, we're helping to run this account. In case you’re wondering, ‘we’ are Jonnie and Colin and we worked with David on A Life On Our Planet. So, as well as sharing the messages he’s recorded especially for this account we’ll also post some exclusive clips and behind the scenes content. Stay tuned.

Listen: Afghan women take a seat with the Taliban at the negotiating table 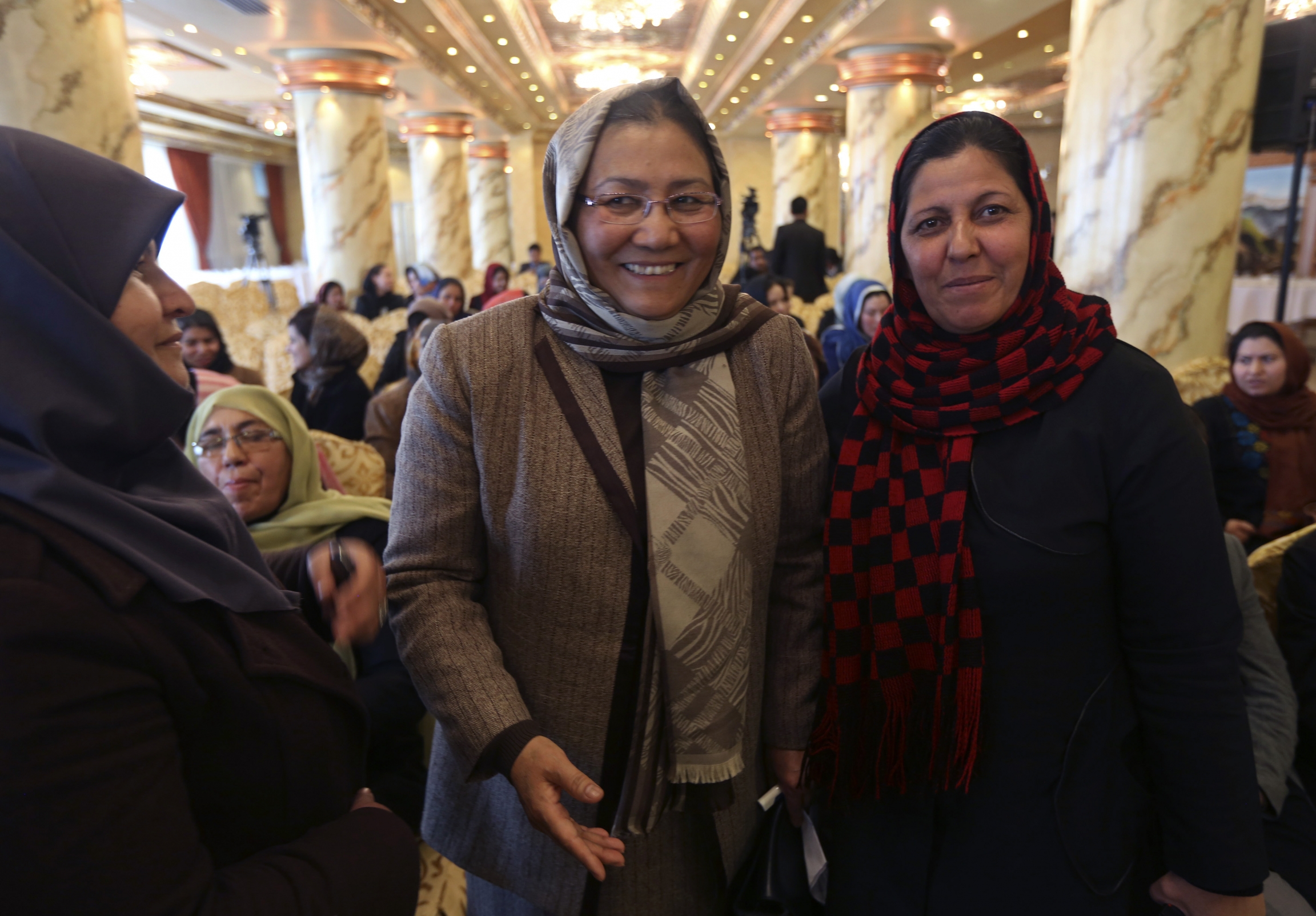 After nearly 20 years of violence and war, representatives from the Afghan government are meeting with Taliban officials, including two women who are sitting across the table from the Taliban. And, it's getting colder in Boston and other parts of the northern hemisphere. That means more time indoors. What are the additional steps people can take to prevent transmission of the coronavirus inside? Plus, has President Donald Trump's popularity with Europe's far-right made an impact on the populist movement there? And, China has just announced an aggressive new climate target: carbon neutrality within 40 years.