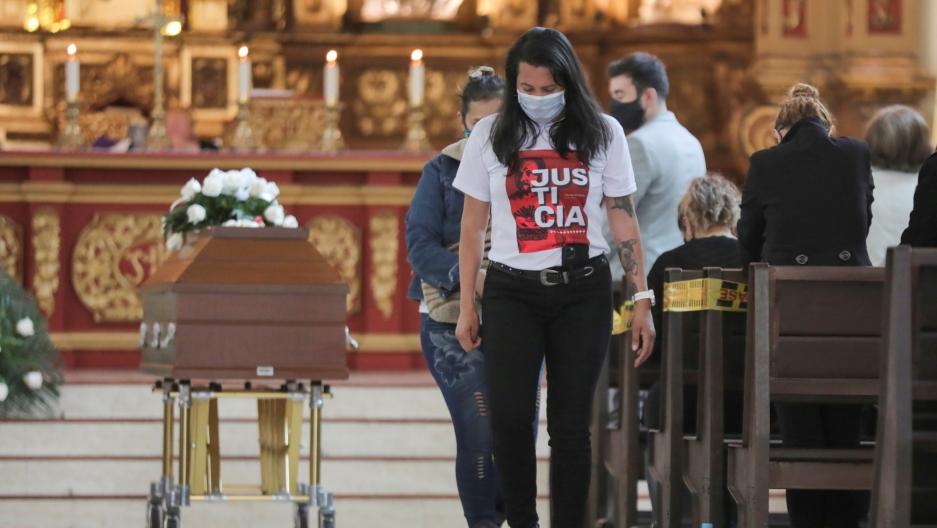 A family member of Javier Ordonez, who died after being detained by the police, wears a T-shirt that reads: "Justice for Javier" during his funeral in Bogota, Colombia, Sept. 16, 2020.

A recent wave of deadly clashes in Colombia’s capital between uniformed officers and protesters denouncing police brutality is consistent with a long-standing pattern of state abuse, according to an upcoming report looking at complaints against the national police.

Colombian police officers killed 639 people from 2017 to 2019, according to the study to be published next month by Temblores, a human rights NGO.

Last week, 14 people were killed and hundreds were injured in the capital, Bogotá, and the neighboring municipality of Soacha, as protesters responded to a viral video showing two uniformed officers kneeling on an unarmed person and repeatedly shocking him as he begged them to stop. The man, Javier Ordoñez, a father of two, died while in police custody.

“This landscape of state violence is nothing new,” Sebastian Lanz, co-director of Temblores, told The World. “It’s a landscape that has long existed in the entire country.”

'We ask for forgiveness'

The chaos that erupted after the killing of Ordoñez on Sept. 8 has drawn attention to the issue of police violence in Colombia and underscored a political rift between the progressive, left-leaning, local government of Bogotá Mayor Claudia Lopez and the conservative, right-leaning, national government of President Iván Duque.

Defense Minister Carlos Holmes Trujillo — who is responsible for Colombian internal security — has said citizens have a right to protest, but also condemned protesters who turn violent.

Lopez organized a televised remembrance from downtown Bogotá on Sunday, and apologized on camera to family members of people killed in the protests. Duque was notably absent, as a chair with his name on it sat empty during the event.

“We ask for forgiveness for the events that have transpired, despite my efforts and clear instructions for police to never use lethal weapons in our city,” Lopez said. She embraced family members of the victims and added that the local unit of the national police didn’t follow her orders.

Commanding officer Gustavo Moreno said at a press conference that neither the police general nor anyone else specifically authorized officers to shoot. But the officers were under attack, and they have the discretion to fire if necessary, he said.

Authorities say multiple investigations are underway. They are looking at the officers who killed the first unarmed man and the officers who fired at protesters, as well as the rioters who attacked police.

But advocacy groups say such police attacks in public spaces cannot continue. Most of those who were killed last week were fatally shot. One woman was run over by a hijacked bus. Relatives and friends of some of the victims said they were participating in the protests, while others said they were unlucky bystanders.

"This landscape of state violence is nothing new."

Cristian Camilo Hernández, 26, was delivering food on his bicycle, his father José Edilberto Hernández told Blu Radio. Police officers shot Hernández, the father said, leaving behind two daughters, one who is turning two in December and another who is seven.

“They took part of my life from me,” the father said.