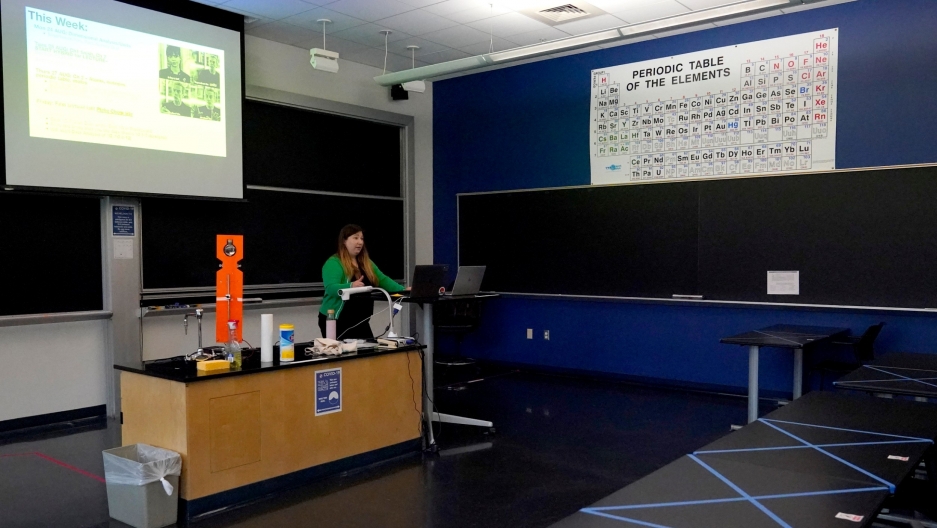 Sections of a table are seen blocked off with tape as assistant professor Jennifer Guerard speaks into laptops while teaching a foundations of chemistry remote class at the US Naval Academy, Aug. 24, 2020, in Annapolis, Md.

College life is built around socialization: weekend football games, late-night cram sessions in the library, afternoons on the quad, and shared meals in the dining hall. Now, in 2020, nearly all of the classic moments that students look forward to on campus have gone up in smoke.

Universities around the country scrambled over the summer to come up with plans for the fall that take into account the expectations students have for college life, while still providing safety in the middle of a pandemic. But if those competing needs sound impossible to manage, they may just be. Campuses have introduced everything from plexiglass shields to waste tracking to get students safely back to campus, but it doesn’t seem to be enough; outbreaks are continuing, and normal campus life is nearly nonexistent.

Jeff Selingo, the former editor of the Chronicle of Higher Education and author of “Who Gets In and Why: A Year Inside College Admissions,” says that, when it comes to this balancing act, there’s a disconnect between what students want and what colleges are willing and able to compromise on. This could accelerate a reckoning that has been building in higher education for years. Colleges have already been facing dropping enrollment numbers and funding cuts in the billions. Students are collectively more than $1 trillion in debt. And while some schools were already taking steps to embrace new business models before the pandemic, it might not be enough to save all the schools at risk of closure.

“Everything has been accelerated by this pandemic, and now institutions that felt they had a five-year runway, have a one- or two-year runway,” Selingo said.

One estimate found 235 private institutions in the “high risk” category before the pandemic began. Now, that number is up 47% — 345 private colleges are in danger of shutting their doors within six years.

Part of the worry isn’t just for the students and institutions themselves. If universities were to go the way of brick-and-mortar stores, more than just the students and faculty would be in trouble. The communities that colleges are embedded in rely on these institutions not only for arts and culture, but also for millions of jobs.

To take one city as an example, the largest employers in Rochester, New York, used to be companies such as Kodak and Xerox. Now, it’s the University of Rochester, accounting for more than 28,000 jobs — nearly double the employer in the number-two spot.

But students are not obligated to shell out tuition money just because college towns need their dollars. Without a normal campus experience available, the value of being close to your college or university may drop drastically. After Harvard University announced that it would be offering classes online this semester, as much as 20% of the incoming class deferred their fall 2020 term.

JJ Conway, a rising junior at Kenyon College in Ohio, decided to take a semester off after he learned that juniors and seniors would not be returning to campus and would be taking classes online instead.

“It doesn’t really seem worth it to spend a whole semester of college away from the community that makes college what it is,” Conway said.

Despite this, thousands of students are still returning to campuses around the country knowing that it’s going to be a very different type of school year. One such student, Ben Greenblatt, is a sophomore at the University of Maine.

“I don’t know if I should be paying as much money as I am for just being on campus,” he said. “I’m definitely not going to be getting the full college experience, having seen that as a freshman, and now coming back as a sophomore, I know just how different it’s going to be. So, it would be very nice if I could see the prices adjusted to reflect that, but that’s very out of my hands.”

Some students are also coming back to campus because the specific resources that universities have aren’t easily accessible elsewhere. Saffron Joy Krause, a fourth-year student at the University of Illinois at Urbana-Champaign, wants to become a printmaker, and she can’t do that from behind a computer screen.

Colleges have an uphill battle in front of them. While students want to be at school and understand the value of their campus resources, universities have to ask themselves some hard questions. For one, what makes a college special? Selingo says that students choose an institution based on a variety of factors, and location and campus community rank high.

This lack of individuation in what colleges are able to offer is only part of the problem that Selingo is seeing. Upcoming graduating classes at high schools are smaller than previous years, so colleges have already been anticipating lower enrollment. On top of that, incoming students aren’t necessarily the same students that universities have catered to, historically.

There are no easy answers about what schools should be doing right now to best serve their students, but Selingo sees room for positive change in some of the new practices that colleges are trying out. For one, Selingo says that students have been asking for an experience that mixes online and in-person study.

“They’re largely going back to campus because there’s that coming-of-age experience  —  there are the clubs, the activities, living with somebody and dining with somebody — but what they don’t think necessarily has to happen in-person are classes,” he said.