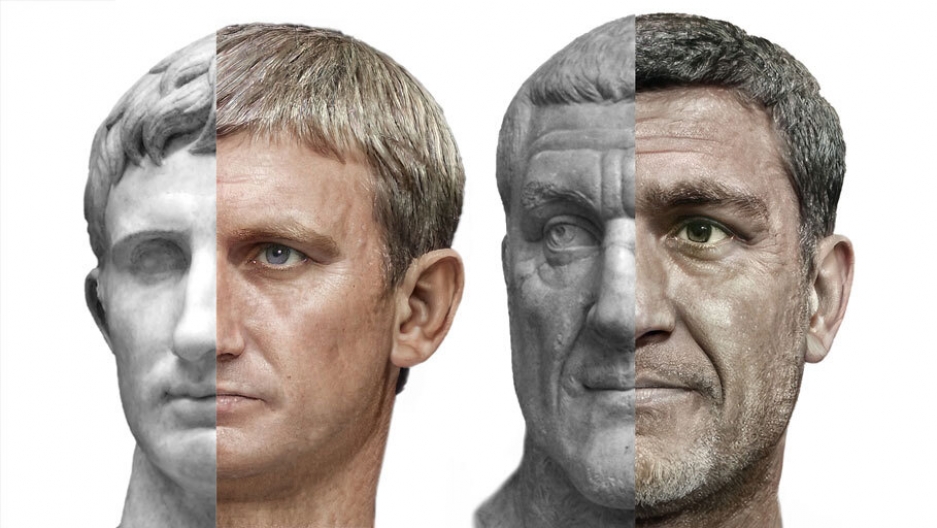 Some people have spent their quarantine downtime baking sourdough bread. Others experiment with tie-dye. But others — namely Toronto-based artist Daniel Voshart — have created painstaking portraits of all 54 Roman emperors of the Principate period, which spanned from 27 BC to 285 AD.

The portraits help people visualize what the Roman emperors would have looked like when they were alive.

Included are Voshart’s best artistic guesses of the faces of emperors Augustus, Nero, Caligula, Marcus Aurelius and Claudius, among others. They don’t look particularly heroic or epic — rather, they look like regular people, with craggy foreheads, receding hairlines and bags under their eyes.

What did I do during quarantine? 54 Machine-learning assisted portraits of the Roman Empire.

For this project, I transformed or restored (cracks, noses, ears etc.) over 800 images.https://t.co/yQWWIgfvjJ

Voshart starts by feeding the GANs hundreds of images of the emperors collected from ancient sculpted busts, coins and statues. Then he gets a composite image, which he tweaks in Photoshop. To choose characteristics such as hair color and eye color, Voshart researches the emperors’ backgrounds and lineages.

“It was a bit of a challenge,” he says. “About a quarter of the project was doing research, trying to figure out if there’s something written about their appearance.”

He also needed to find good images to feed the GANs.

“Another quarter of the research was finding the bust, finding when it was carved… because a lot of these busts are recarvings or carved hundreds of years later,” he says.

In a statement posted on Medium, Voshart writes: “My goal was not to romanticize emperors or make them seem heroic. In choosing bust/sculptures, my approach was to favor the bust that was made when the emperor was alive. Otherwise, I favored the bust made with the greatest craftsmanship and where the emperor was stereotypically uglier — my pet theory being that artists were likely trying to flatter their subjects.”

Voshart is not a Rome expert. His background is in architecture and design, and by day he works in the art department of the TV show "Star Trek: Discovery," where he designs virtual reality walkthroughs of the sets before they're built.

But when the coronavirus pandemic hit, Voshart was furloughed. He used the extra time on his hands to learn how to use the Artbreeder software.  The idea for the Roman emperor project came from a Reddit thread where people were posting realistic-looking images they’d created on Artbreeder using photos of Roman busts. Voshart gave it a try — and went into exacting detail with his research and design process, doing multiple iterations of the images.

Voshart says he made some mistakes along the way. For example, Voshart initially based his portrait of Caligula, a notoriously sadistic emperor, on a beautifully preserved bust in the Metropolitan Museum of Art. But the bust was too perfect-looking, Voshart says.

“Multiple people told me he was disfigured, and another bust was more accurate,” he says.

So, for the second iteration of the portrait, Voshart favored a different bust where one eye was lower than the other.

“People have been telling me my first depiction of Caligula was hot,” he says. “Now, no one’s telling me that.”

“I get maybe a few too many comments, like ‘such-and-such is hot.’ But a lot of these emperors are such awful people!”

“I get maybe a few too many comments, like ‘such-and-such is hot.’ But a lot of these emperors are such awful people!” Voshart says.

Voshart keeps a list on his computer of all the funny comparisons people have made to present-day celebrities and public figures.

“I’ve heard Nero looks like a football player. Augustus looks like Daniel Craig…my early depiction of Marcus Aurelius looks like the Dude from 'The Big Lebowski.'”

No one knows for sure whether Augustus actually looked like Vladimir Putin in real life. Voshart says his portraits are speculative.

“It’s definitely an artistic interpretation,” he says. “I’m sure if you time-traveled, you’d be very angry at me."