On the top floor of the home built by his grandparents, Henri Azar moves slowly through the room he’s shared with his wife for a half a century.

The window is blown out and the sun seeps through the holes open to the sky. Bricks and tiles that formed the roof were blown off in the massive Aug. 4 blast at Beirut's port.

Azar surveys what’s left of his three-story family home, with its high ceilings and marble floors. What was once the north-facing wall of his living room is now just a gaping void with a panoramic view of his destroyed Mar Mikhaël neighborhood, bordered with torn but ornate beige curtains.

Inside, remnants of his family’s shattered life are strewn around the living room: furniture, magazines and a portrait of Jesus.

Azar and his family were at a church service outside Beirut when the 2,750 tons of ammonium nitrate exploded less than a mile away in Beirut’s main civilian port almost a month ago.

“When we came back there was nothing,” Azar says. 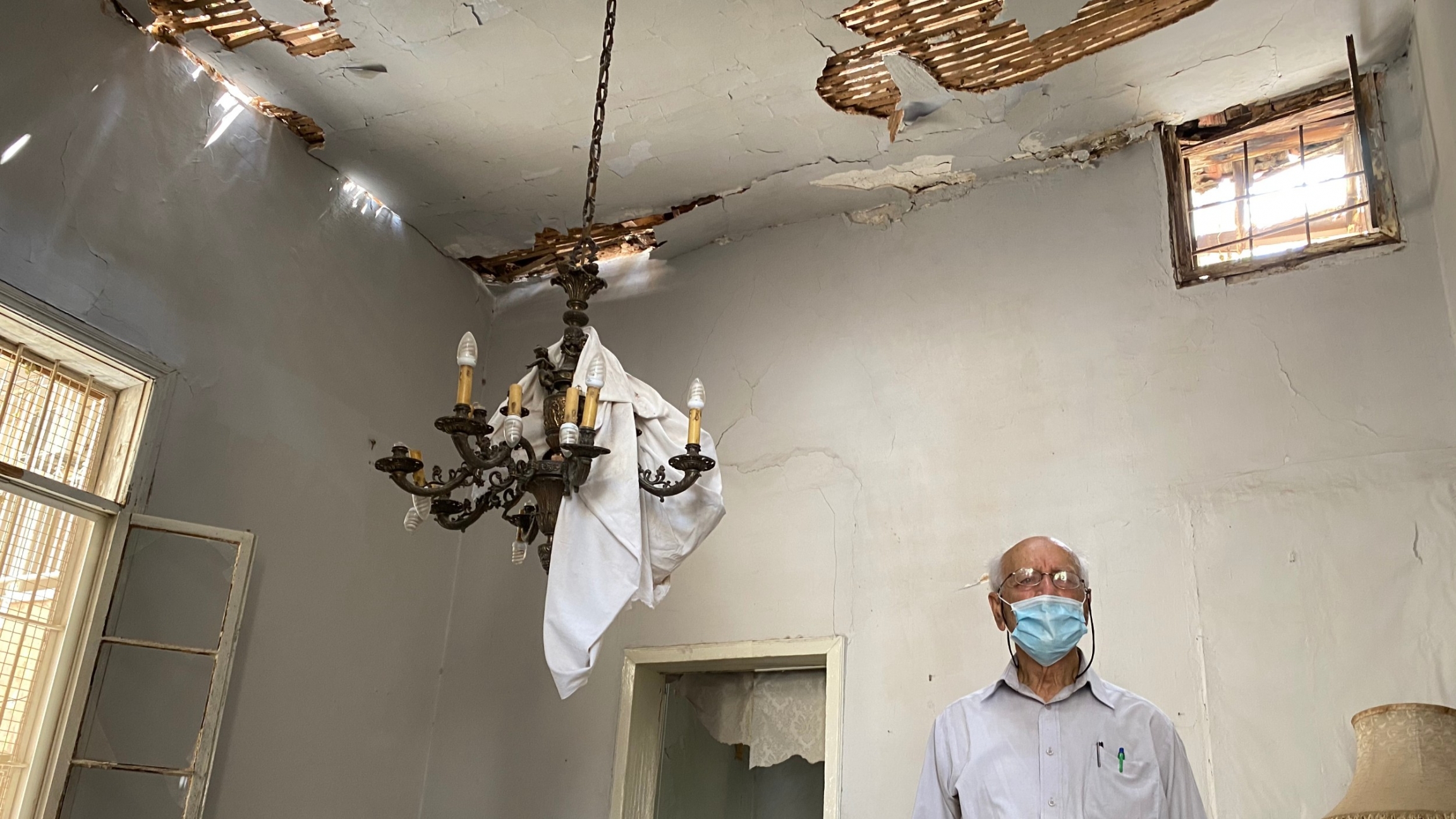 Henri Azar stands inside his home, which was heavily damaged during the August 4 blast at Beirut's port.

The blast ripped through some of Beirut’s most historic neighborhoods, damaging tens of thousands of buildings, many of them heritage homes like Azar’s that had survived Lebanon's 15-year civil war. Around 2,000 buildings have been completely destroyed. An estimated 300,000 people are homeless, including Azar, who is now staying with relatives outside Beirut.

The Azars estimate the damage to their family home to be about $200,000 — money they don’t have. Like most people in Lebanon, they don’t have insurance. And, like so many other Lebanese, the money they do have is locked in the bank and not accessible because of capital controls put in place due to the country’s financial crisis, which predates the blast and the coronavirus pandemic.

“On Tuesday, the blast happened. On Thursday, we had news of investors … agents going around the street trying to take advantage of what happened and the weakness of the people at that time.”

Late last year, banks began capping withdrawal and transfers abroad as the country’s financial system, which has been likened to a Ponzi scheme, crumbled.

But something else is putting these homes at risk, says Naji Raji, a preservation activist with Save Beirut Heritage: real estate vultures.

“On Tuesday, the blast happened. On Thursday, we had news of investors …agents going around the street trying to take advantage of what happened and the weakness of the people at that time,” Raji says. “We hope that they didn’t succeed.”

Owners like Azar are in a difficult position. Without the money to repair their homes, and with offers to buy, they face the tough decision to give up their family homes — possibly to see them torn down to make way for much more profitable high-rises — or having nowhere to live. 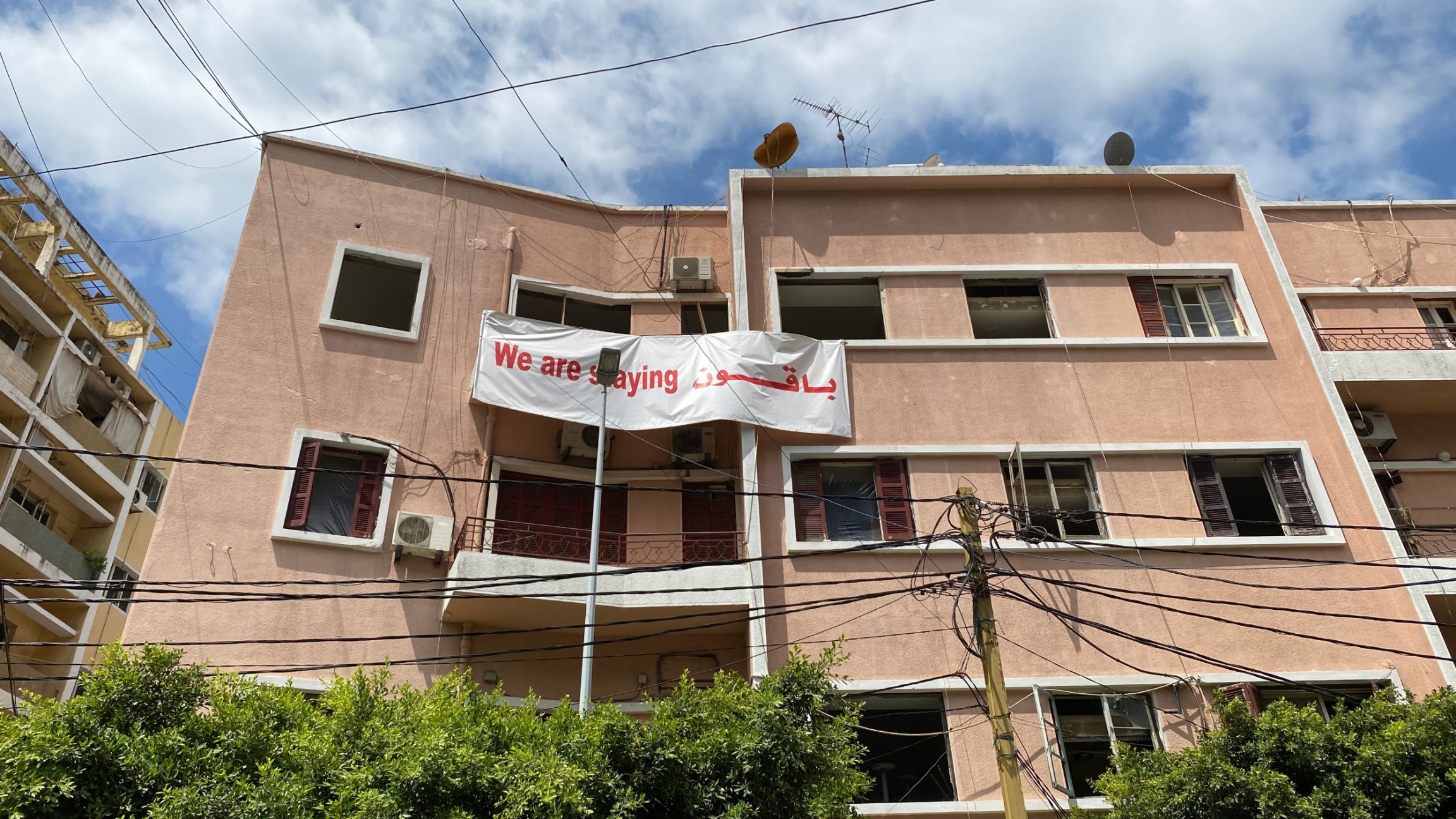 Defiant signs in a part of Beirut beset by rumors that developers are trying to push residents out.

Many who don’t own their homes are tenants under Lebanon’s old rent-control system, enacted after WWII. They pay just a few hundred dollars per year for an apartment that could get double that per month at market rates.

Naji says both property developers and owners of rent-controlled apartments are trying to take advantage of the destruction following the blast.

“Some engineers are paid by the companies, and some of them are paid by the original owners, to give fake assessments and to convince the people that they need to leave the house right away because it's going to collapse on their heads,” Naji says.

If they depart — and if homes like the Azar’s are torn down — Beirut risks losing swaths of its distinctive architectural fabric.

Next to Azar’s 100-year-old, coral-colored home, with its traditional mandaloun three-arch windows, is an Ottoman-era building of grey stone. Others on that street were built in the time of the French Mandate. Above them all are towering modern buildings that have made the surrounding land so valuable.

The city's downtown was once the heart of Beirut, with a millennia-old market and distinct architecture that reflected Lebanon’s many rulers and occupiers, from the Phoenicians to the French. Yet Beirut’s downtown was a front line for much of Lebanon’s civil war, damaging many of the edifices.

Post-war prime minister and construction mogul Rafik Hariri was accused of pushing landowners and old tenants out to make way for his Solidere construction company’s glitzy rebuild of downtown. That redevelopment saw the traditional souk turned to an open-air mall hosting mostly international chains. Few Lebanese now visit what was once the center of daily life in Beirut.

Raji and his organization have a plan to prevent a repeat of all that. They’ve set up a fund to help people like the Azars repair their heritage homes damaged in the recent blast. But with so many severely damaged, the cost is big. “In my low estimation, it would be around $120 to $150 million,” Naji says.

That’s just heritage buildings, and so far they’ve raised $100,000 — though he says they've had pledges of millions more. There are several other initiatives trying to help people repair their homes and replace doors and windows blown off in the explosion.

And shortly after the explosion, a law was passed disallowing the sale of property in the blast-affected area. However, Raji has little faith the law will protect people: “Because protecting heritage means a big, big loss for their construction companies and their investment companies,” he says.

Near the Azars’ home in Mar Mikhaël, some of the homes and businesses have hung large, defiant banners with “we are staying” written in thick red letters. Further down the street, posters from a sectarian-based political party echoes that sentiment and warns against attempts to push Christians out of the historically Christian neighborhood, stoking fears in a country still suffering from religious tensions decades after the end of the war.

Next to the entrance of Azar’s building, a poster proclaims “BEIRUT IS NOT FOR SALE,” and warns of “Solidere 2.0”. It offers the phone number for Save Beirut Heritage to those who are being pressured to sell.

Inside, Azar points to the east side of the apartment, which was hit by a rocket during the country’s civil war. “We fixed it,” he recalls. But now there is much more damage. A wall is missing, a cabinet in the kitchen holds up a section of the roof, and smashed doors and window frames lay in piles.

A team of engineers with official IDs arrives to survey the damage. In the apartment below they point to a deep crack in the wall, where it looks as if the two rooms divided by the wall might literally fall away from each other. The building would be very costly to repair. 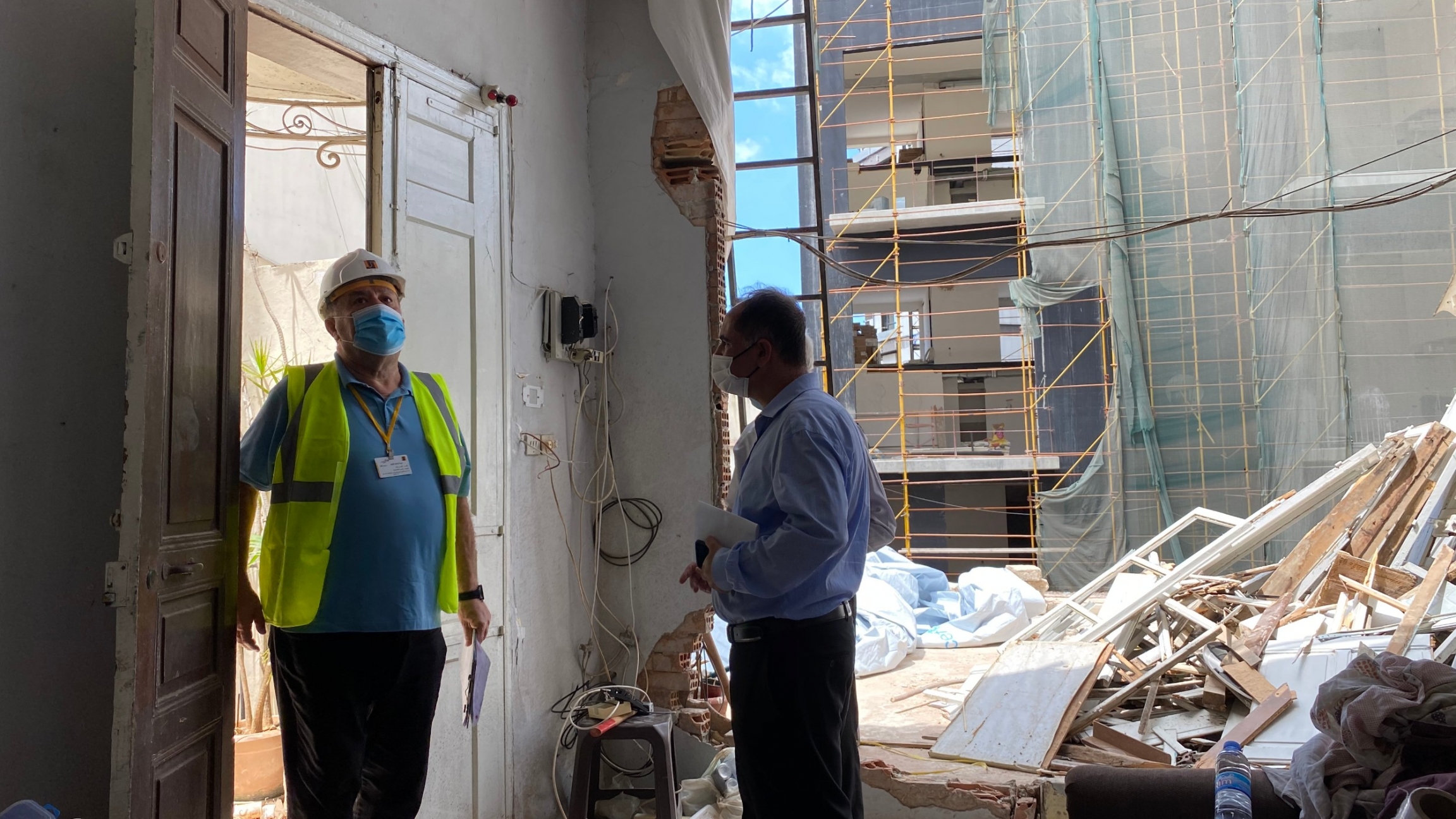 Henri's son Joseph greets an engineer who came to survey the damage at the Azar family home in Beirut's Mar Mikhaël district.

From the window, crews can be seen fixing buildings on the other side of the street, a recently built dozen-story modern high-rise.

The Azars’ family home, just three stories high, sits on what before the blast was a busy street filled with restaurants and bars. It’s prime real estate. If torn down and replaced by a tower like the one across the street, it could be worth millions.

Related: 'Our house is your house': Locals open their homes after Beirut blast

Henri Azar says they have had many offers to sell since the explosion.

But for now, he can’t rebuild either. He says he’s waiting for help from the government. But Lebanon’s government is broke, and it could cost $15 billion to rebuild the thousands of damaged buildings, infrastructure and the port itself.

Some foreign states are offering support, but nothing compared to what’s needed. So in the meantime, Azar and others wait and fend off those keen to take advantage of the dire situation.