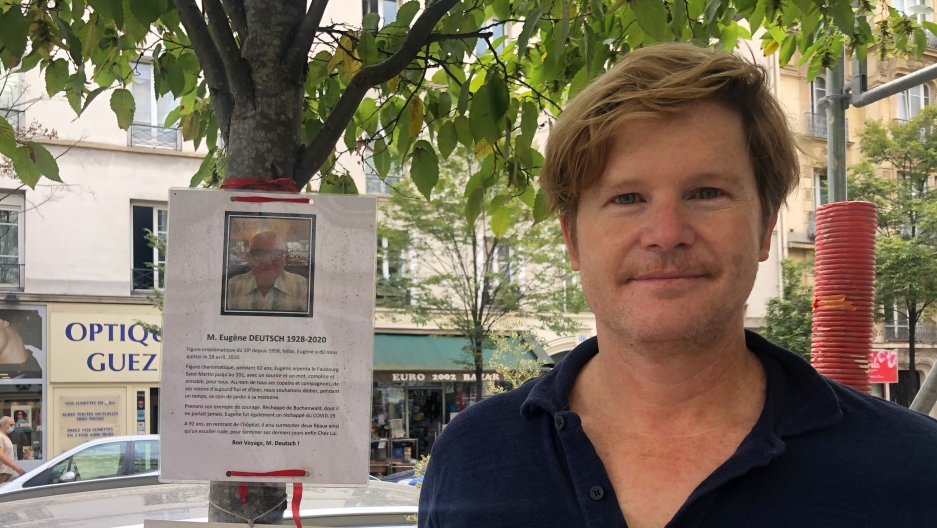 James Smurthwaite stands next to the obituary sign he made to honor his late neighbor Eugene Deutsch.

Le Chateau Landon is a quiet, nondescript brasserie in the 10th arrondissement of Paris, steps away from the Gare de l’Est railway terminal.

Not much about the black and red interior stands out. But the café has kept a steady clientele of regulars for decades — many of whom are older people.

In April, it lost one of its favorite regulars: A 92-year-old man named Eugene Deutsch who had survived the Holocaust, then a bout with COVID-19.

Deutsch was a neighborhood figure known for making the daily rounds at the local cafés and bakeries. He would have his morning coffee at Le Chateau Landon, followed by an afternoon Côtes du Rhône wine at the neighboring Le Cristal. In between, he would buy himself a fresh baguette — always bien cuite, or "well done."

But when France went into lockdown in mid-March, this routine was upended. Deutsch’s health quickly deteriorated.

Philippe, the café’s owner, says that once the lockdown took effect, Deutsch “lost his taste for life.” It’s something he’s seen happen to many older people in the neighborhood.

“[Older people] aren’t necessarily dying of COVID-19, but in a way, they’re dying because of it."

“They aren’t necessarily dying of COVID-19, but in a way, they’re dying because of it,” he said.

Related: Isolation may be a greater risk than COVID-19 for Canada's nursing homes

Deutsch was hospitalized shortly after the lockdown took effect. Neighbors say that he was diagnosed with COVID-19, but recovered and went home. He died a few weeks later from an unrelated health issue.

He had lived in the same building for more than six decades. James Smurthwaite was one of Deutsch’s neighbors.

While they rarely exchanged more than simple pleasantries, Smurthwaite says he was deeply touched by Deutsch and wanted to do something to honor his memory. In late April, he attached an obituary to a tree in front of their building.

Deutsch was generally reserved and didn’t talk much about his personal life. But here’s what Smurthwaite was able to share.

Eugene Deutsch was born in Hungary in 1928. When he was a boy, he was sent to the Buchenwald concentration camp in Germany, something he never spoke about after the war. In the 1950s he settled in Paris, where he worked as a security guard at a department store. Deutsch never married or had children, but he enjoyed being around others.

Smurthwaite says that above all, Deutsch loved being outside and used to walk for miles every day.

Smurthwaite hopes those reading the dedication he posted will spare a thought for the many older people now stuck inside, and who, like Deutsch, may never see a world post-COVID-19.

“With COVID[-19], this generation will know only their last days in this context and I think that’s devastating."

“With COVID[-19], this generation will know only their last days in this context, and I think that’s devastating,” Smurthwaite says.

Back at the café, the owner Philippe, who only goes by his first name, grabs a teeny tiny wine glass he keeps on a shelf behind the bar. It’s so small, they don’t actually make this kind of glass anymore. But he kept it for Deutsch.

“And now this glass is sad,” he says. “It’s a small souvenir of someone who I miss dearly...someone who was a pillar of the neighborhood.”