Its terms of reference seek to understand ways “the traditional land and fire management practices of Indigenous Australians could improve Australia’s resilience to natural disasters.”

Accommodating traditional fire knowledge is a long-overdue accompaniment to recent advances in land rights and Native title. It is an essential part of the unfinished business of postcolonial Australia. 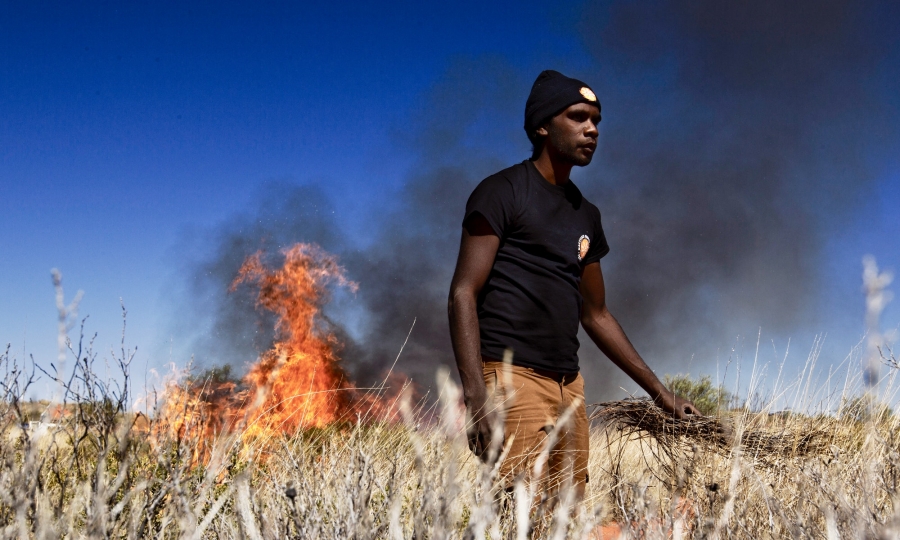 Grant Stewart, a ranger from Kanyirninpa Jukurrpa. The benefits of Indigenous fire practices are becoming well-known.

Before 1788, Aboriginal cultures across Australia used fire to deliberately and skillfully manage the bush.

Broadly, it involved numerous, frequent fires that created fine-scale mosaics of burned and unburned patches. Developed over thousands of years, such burning made intense bushfires uncommon and made plant and animal foods more abundant. This benefited wildlife and sustained a biodiversity of animals and plants.

Following European settlement, Aboriginal people were dispossessed of their land and the opportunity to manage it with fire. Since then, the Australian bush has seen dramatic biodiversity declines, tree invasion of grasslands and more frequent and destructive bushfires.

In many parts of Australia, particularly densely settled areas, cultural burning practices have been severely disrupted. But in some regions, such as clan estates in Arnhem Land, unbroken traditions of fire management date back to the mid-to-late Pleistocene era some 50,000 years ago.

Not all nations can draw on these living records of traditional fire management.

Indigenous people around the world, including in Western Europe, used fire to manage flammable landscapes. But industrialization, intensive agriculture and colonization led to these practices being lost.

In most cases, historical records are the only way to learn about them.

Rising from the ashes

In Australia, many Aboriginal people are rekindling cultural practices, sometimes in collaboration with nonindigenous land managers. They are drawing on retained community knowledge of past fire practices — and in some cases, embracing practices from other regions.

Burning programs can be adapted to the challenges of a rapidly changing world. These include the need to protect assets, and new threats such as weeds, climate change, forest disturbances from logging and fire, and feral animals.

This process is outlined well in Victor Steffensen’s recent book "Fire Country: How Indigenous Fire Management Could Help Save Australia." Steffensen describes how, as an Aboriginal man born into two cultures, he made a journey of self-discovery — learning about fire management while being guided and mentored by two Aboriginal elders.

Together, they reintroduced fire into traditional lands on Cape York. These practices had been prohibited after European-based systems of land tenure and management were imposed.

Steffensen extended his experience to cultural renewal and ecological restoration across Australia, arguing this was critical to addressing the bushfire crisis:

The bottom line for me is that we need to work towards a whole other division of fire managers on the land […] A skilled team of indigenous and non-indigenous people that works in with the entire community, agencies and emergency services to deliver an effective and educational strategy into the future. One that is culturally based and connects to all the benefits for the community.

So how do we realize this ideal? Explicit affirmative action policies, funded by state and federal governments, are a practical way to protect and extend Aboriginal burning cultures.

Specifically, such programs should provide ways for Aboriginal people and communities to:

This will require rapidly building capacity to train and employ Aboriginal fire practitioners.

In some instances, where the impact of colonization has been most intense, action is needed to support Aboriginal communities to reestablish relationships with forested areas, following generations of forced removal from their Country.

Importantly, this empowerment will enable Aboriginal communities to reestablish their own cultural priorities and practices in caring for the country. Where these differ from the Eurocentric values of mainstream Australia, we must understand and respect the wisdom of those who have been custodians of this flammable landscape for millennia.

Nonindigenous Australians should also pay for these ancient skills. Funding schemes could include training, and ensuring affirmative action programs are implemented and achieve their goals.

Involving Aboriginal people and communities in the development of fire management will ensure cultural knowledge is shared on culturally agreed terms.

In many ways, last summer’s fire season is a reminder of the brutal acquisition of land in Australia and its ongoing consequences for all Australians.

The challenges involved in helping to right this wrong, by enabling Aboriginal people to use their fire management practices, are complex. They span social justice, funding, legal liability, cultural rights, fire management and science.

Fundamentally, we must recognize that Aborigines are “fire people” who live on “fire country.” It’s time to embrace this ancient fact.

This article is republished from The Conversation, a nonprofit news organization dedicated to unlocking ideas from academia,  under a Creative Commons license. David Bowman is Professor of Pyrogeography and Fire Science, University of Tasmania; Greg Lehman is Pro Vice Chancellor, Aboriginal Leadership, University of Tasmania; and Andry Sculthorpe is at the Tasmanian Aboriginal Centre.