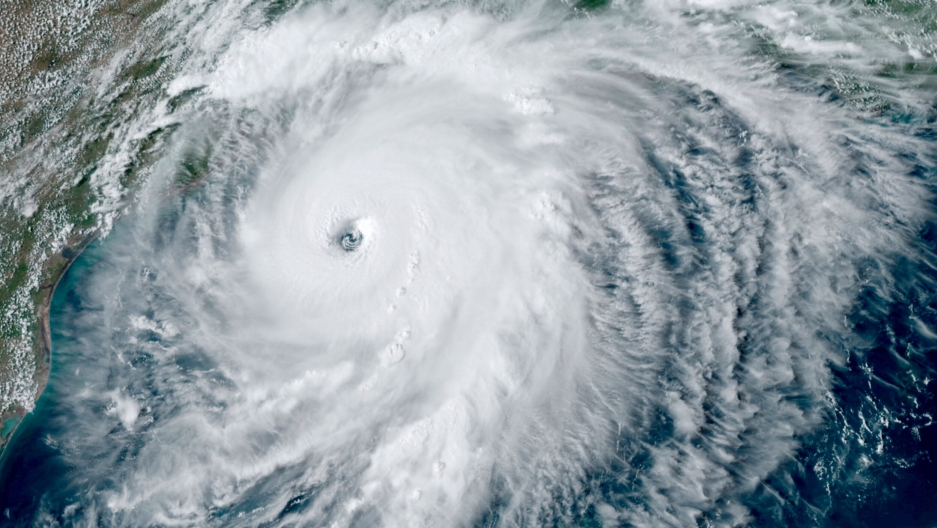 A satellite image provided by NOAA, shows Hurricane Laura over the Gulf of Mexico.

Hurricane Laura made landfall just after midnight in southern Louisiana, 35 miles east of the Texas border as a Category 4 storm. With winds up to 150 mph, Laura was one of the most intense storms in decades to hit the Gulf of Mexico coast.

Footage from Lake Charles, La., showed windows shattered and flying debris. On Thursday morning, the storm was downgraded to a Category 2 but still packed winds of 100 mph as Laura headed northward.

Meteorologists were calling Laura’s storm surge — which rose as high as 20 feet — the largest in the area since Hurricane Katrina in 2005 and so foreboding that the National Hurricane Center labeled the inundation “unsurvivable.” The entire Louisiana National Guard was activated by Gov. John Bel Edwards to assist with disaster relief efforts, after more than half a million people were ordered to flee the Gulf Coast on Tuesday

In some places, rainfall was expected to reach 18 inches, causing flash floods and exacerbating damage from an event for which the National Weather Service had issued an “extreme wind warning.”

The police officer who shot Jacob Blake in Kenosha, Wis., has been identified as Rusten Sheskey. The incident, caught on video, showed Sheskey firing seven times into Blake’s back. And, 17-year-old Kyle Rittenhouse was named as the suspect in a deadly incident during protests in Kenosha Tuesday night. He was charged on Wednesday with first-degree intentional homicide. Rittenhouse took a rifle to a protest on Tuesday night that was sparked by the police shooting and allegedly killed Joseph Rosenbaum and Anthony Huber, who had tried to subdue Rittenhouse.

Meanwhile, the Chinese government test-fired an “aircraft-carrier killer” missile into the South China Sea as a warning to the United States. Beijing was apparently sending a stern message to Washington, after a US spy plane crossed without permission into a no-fly zone during a Chinese naval drill in the Bohai Sea. And on Thursday, Russia blamed the US for a collision in Syria the day prior of military vehicles belonging to the two countries.

And, in New Zealand, white supremacist Brenton Tarrant was handed a life sentence with no chance of parole for killing 51 Muslim worshipers at two mosques in the country’s worst-ever terrorist attack. The youngest victim was three years old. This is the first time a court in New Zealand has sentenced anyone to life in prison. 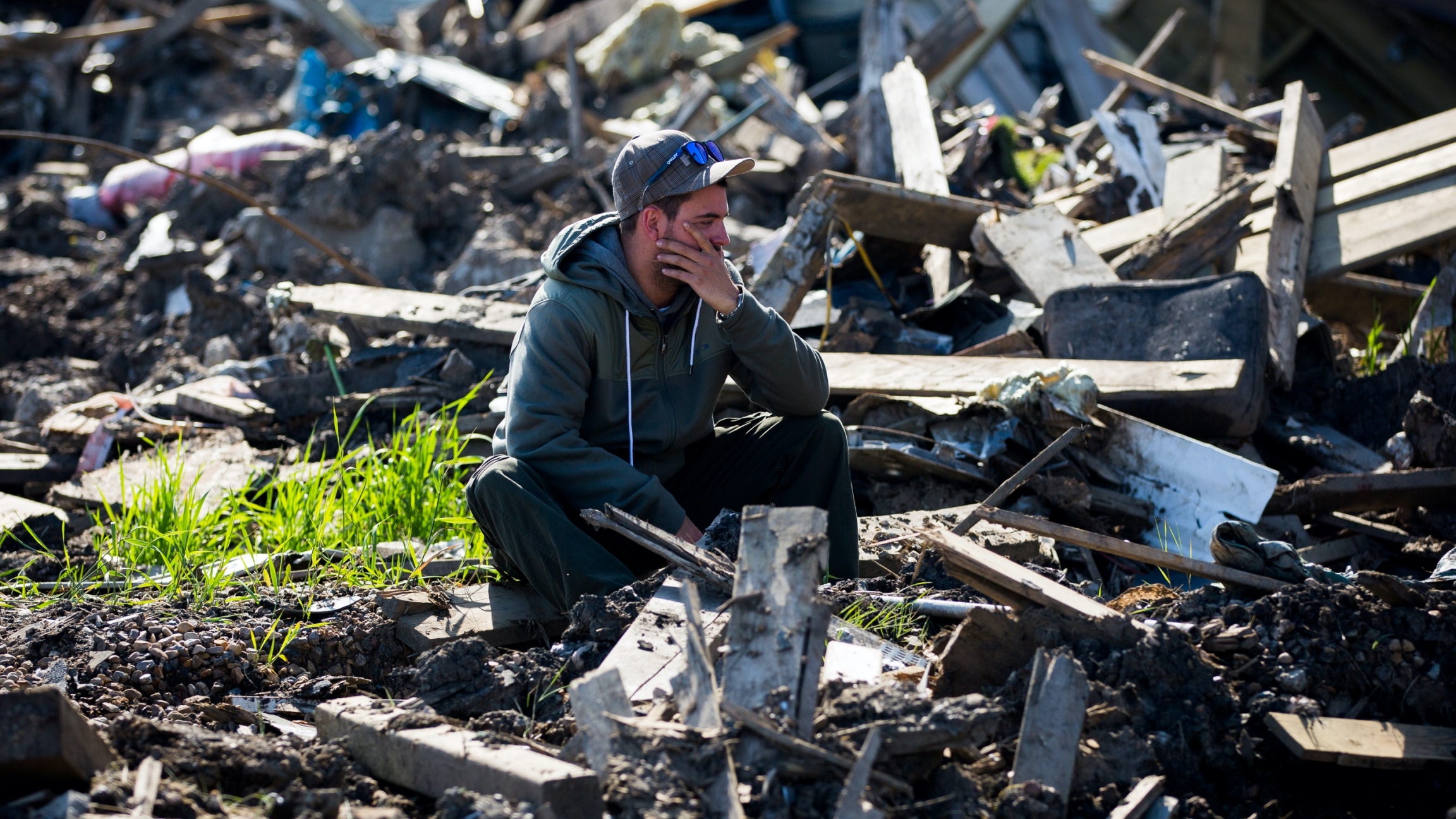 A resident looks over the damage in the Timberlea neighborhood as thousands of evacuees who fled a massive wildfire begin to trickle back to their homes in Fort McMurray, Alberta, Canada, June 2, 2016.

As many countries continue to deal with the health and economic crises caused by the pandemic, a new report by Deloitte Canada warns of a “third-order crisis” to come. Deloitte predicts that visits to mental health professionals will nearly triple. And it says women will be especially hard hit, since three times as many women have lost their jobs so far.

Does Thailand have a monkey labor problem? 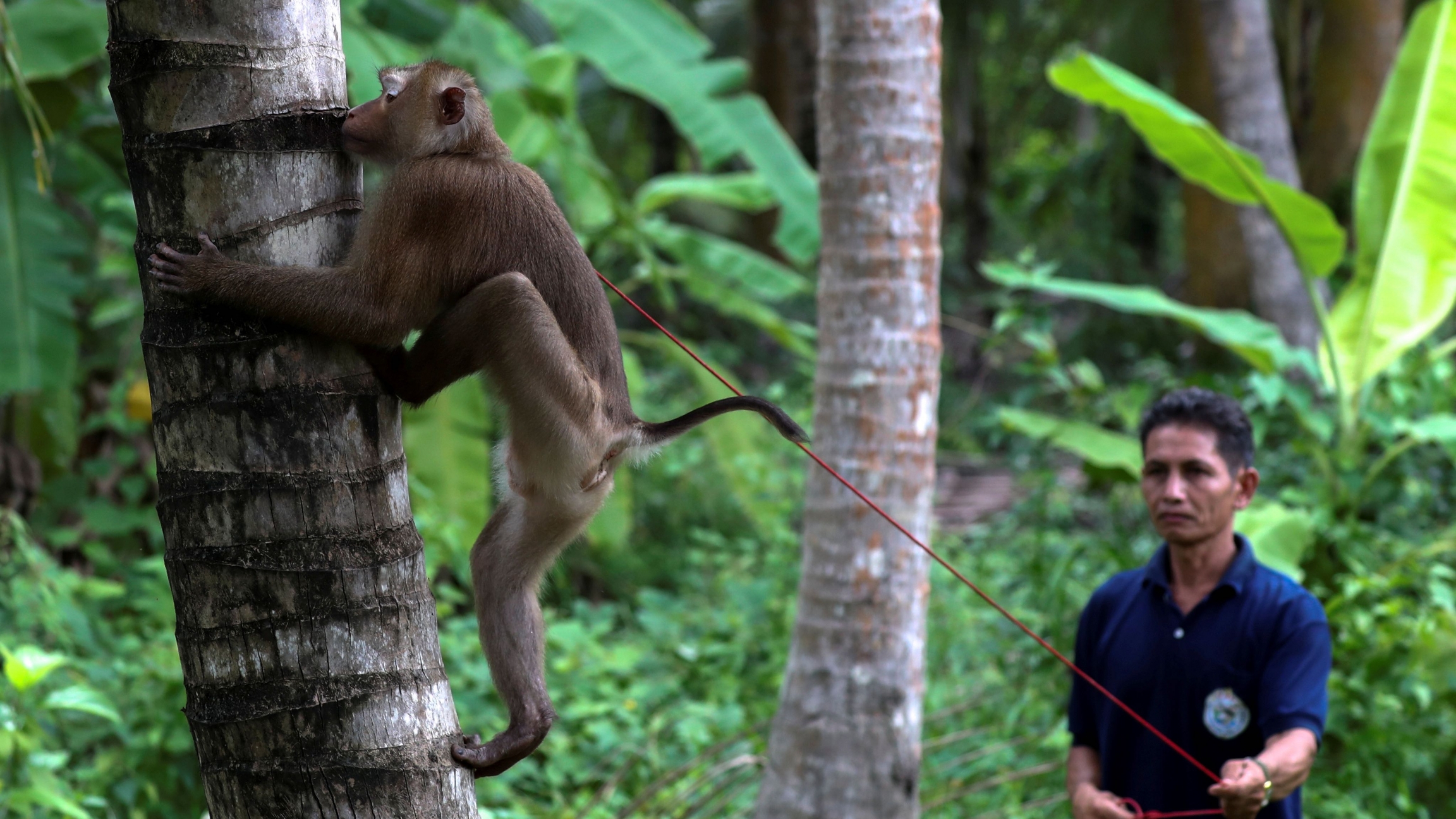 Nirun Wongwanich, 52, trains a monkey during a training session at a monkey school for coconut harvest in Surat Thani province, Thailand, July 10, 2020.

In Thailand, a native habitat for macaques, some of these monkeys are put to work on coconut farms. With agile fingers, macaques can easily scamper up, twist off a coconut and let it drop to the jungle floor, where their hungry children await.

But doing this hundreds of times in one day — to feed humans instead of its kin — goes against a macaque’s nature. Now, a PETA campaign is scandalizing Thailand's huge coconut industry.

If you’re looking for some joy in the world, go find a ukulele player. They are unfailingly chipper, even during a global pandemic.

Last week, about 140 ukulele aficionados from around the globe gathered online for UkeFest, an annual confab hosted by the Music Center at Strathmore in Bethesda, Maryland. They took to Zoom out of love for the four-stringed instrument adapted from the instruments Portuguese immigrants brought to Hawaii in the 19th century. 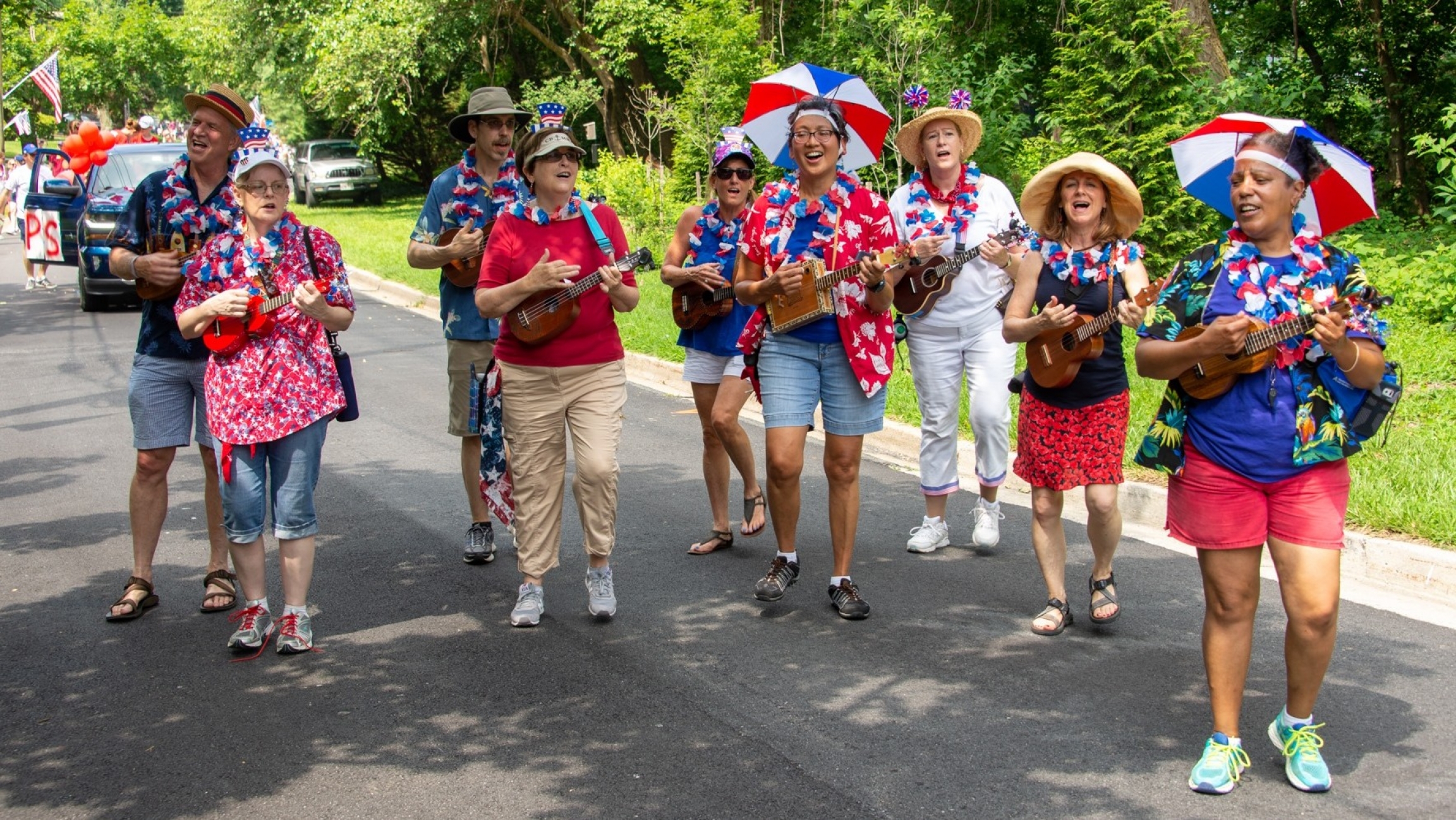 A Maryland-based ukulele marching band performs during a 2019 Fourth of July parade.

Why the traditional Belarusian flag has become a protest symbol 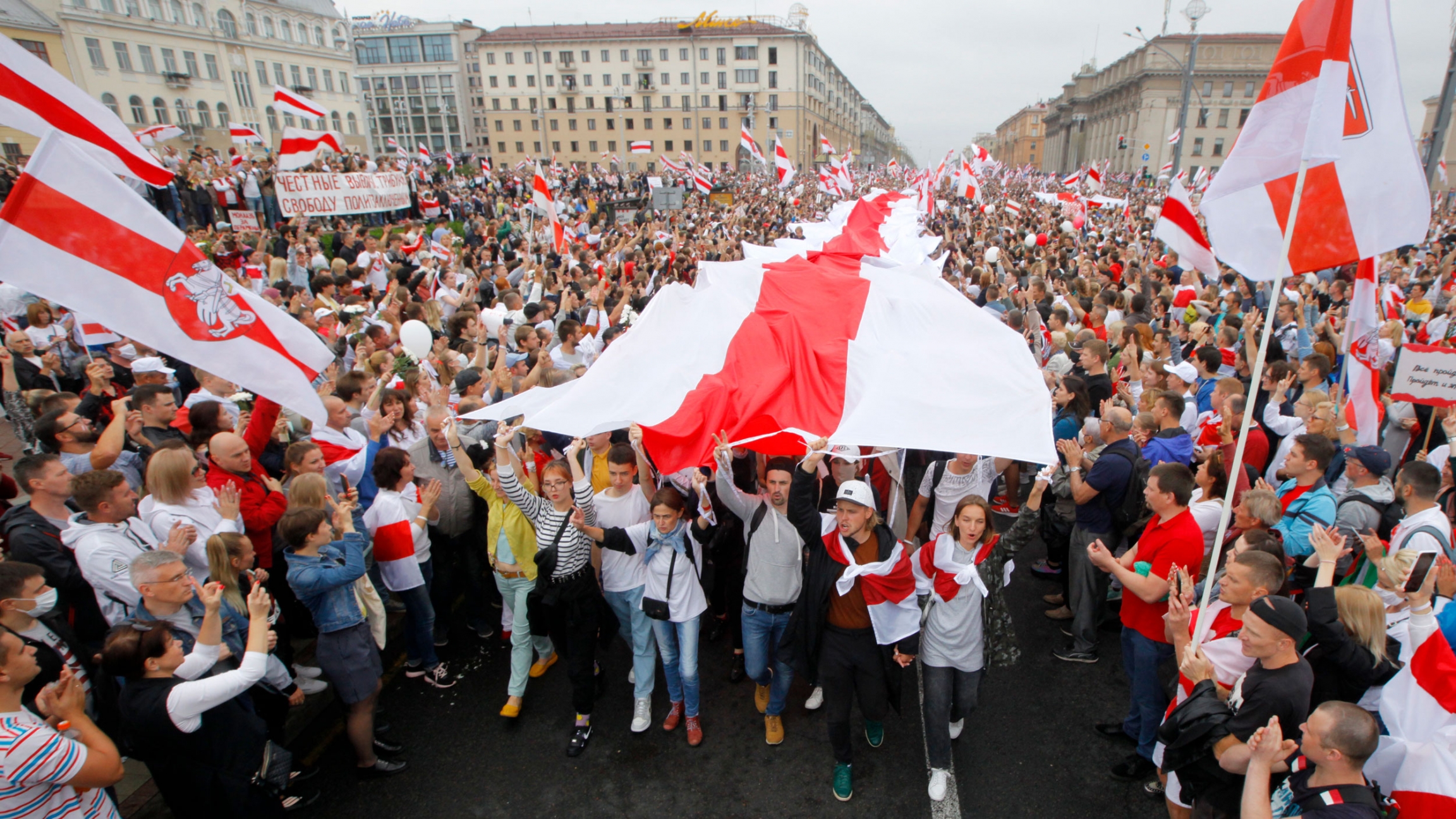 Demonstrators carry a huge historical flag of Belarus as thousands gather for a protest at the Independence Square in Minsk, Belarus, Aug. 23, 2020.

For more than two weeks now, Belarusian citizens have been in the streets calling for President Alexander Lukashenko to step down. Different symbols have popped up as the protests have turned into a movement but the most important symbol has been the traditional red and white Belarusian flag. And, a new paper shows that some 60% of Antarctica's ice shelves are vulnerable to hydrofracture, or meltwater forcing its way into cracks in the ice and breaking them apart. Also, playing music in pubs and restaurants has been banned in Scotland, where authorities worry people shouting to be heard could help spread the coronavirus. Restaurateurs are fighting the idea, saying it's destroying ambiance.