Magdala Jean-Pierre Michel arrived in Canada two years ago. She had left Haiti after a former government official threatened her, she said.

First, she went to the United States, but believed it would be too tough to seek asylum in the US under the Trump administration. So, like many others in her situation, she walked across the border into Canada.

In Quebec, she has worked as an aide in nursing homes, while the Canadian government reviews her asylum case.

“I love my work because you’re close to the person,” she explained in June after finishing her shift at a residence in Montreal. “You talk with them. You’re a bridge between the time they have left on this earth and beyond.”

Earlier this month, Canada’s immigration minister Marco Mendicino announced that the country will grant permanent residency to some asylum-seekers, like Michel, who have been working in institutions hit hardest by the COVID-19 pandemic: hospitals and long-term care homes.

Those who can prove their eligibility based on labor status will receive permission to stay in Canada — whether or not their asylum claim would eventually have been accepted. 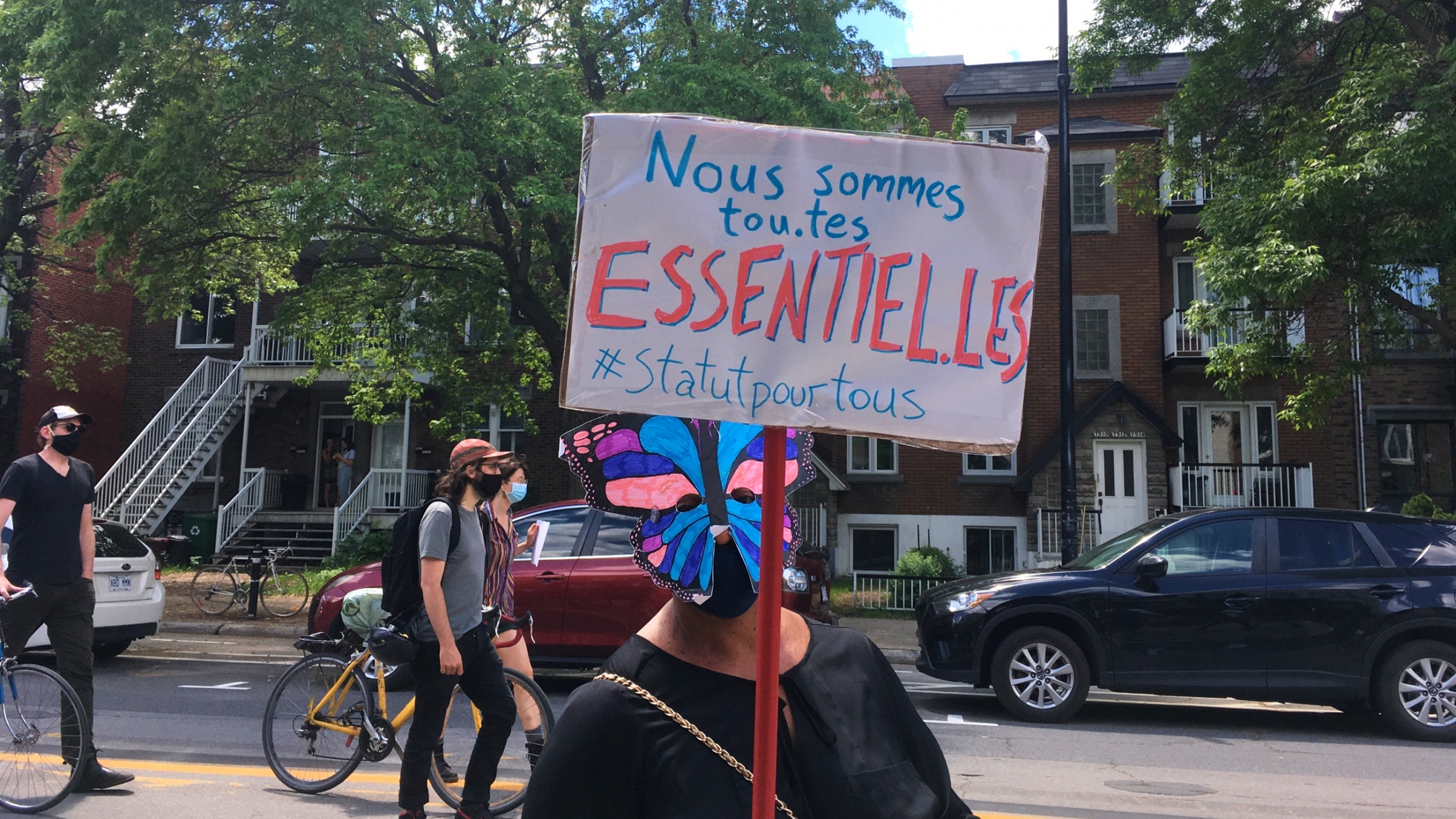 A demonstrator in Montreal holds up a sign in French saying, "We are all essential, status for all."

“We really wanted to place an emphasis on the exceptional contributions of the asylum-seekers who put themselves at the greatest risk,” said Mendicino, explaining that the program would be restricted to asylum-seekers who have directly cared for patients at their jobs.

“Back home, we have an expression,” Michel said. “'What’s not good for you could be good for me.’ Which is to say, the pandemic is a tragedy, but it’s also produced movement on certain things.”

"The pandemic is a tragedy, but it’s also produced movement on certain things."

Migrants on the frontlines

In Canada, asylum-seekers who have crossed from the US by the tens of thousands since 2017 have received a mixed welcome. In Quebec, now-Premier François Legault said back in 2017 that the province could not accommodate “all the world’s misery.”

However, Quebec’s long-term care homes were critically short-staffed and thousands of asylum-seekers found work as orderlies while they waited, sometimes years, for a resolution of their asylum claims.

Many were at the heart of tragedy this spring, as COVID-19 spread through hundreds of Quebec care homes, particularly in and around Montreal.

“The virus traveled quickly," said Michel. “It was like a forest fire.”

More than 60% of COVID-related deaths in Canada have been in Quebec — and 80% of those who died either lived or worked in nursing homes. Some residences reported dozens of deaths.

Legault, who since his comments in 2017 has become head of the provincial government, began referring to care home workers as “guardian angels” in his daily coronavirus press briefings this spring.

Still, he initially resisted calls and demonstrations from immigrant rights advocates arguing that asylum-seekers at care homes and hospitals should be assured they can remain in Canada.

“We cannot open the door to say, ‘If you come illegally, if you find a job, that’s OK, I will accept you as an immigrant,'” Legault said in May. 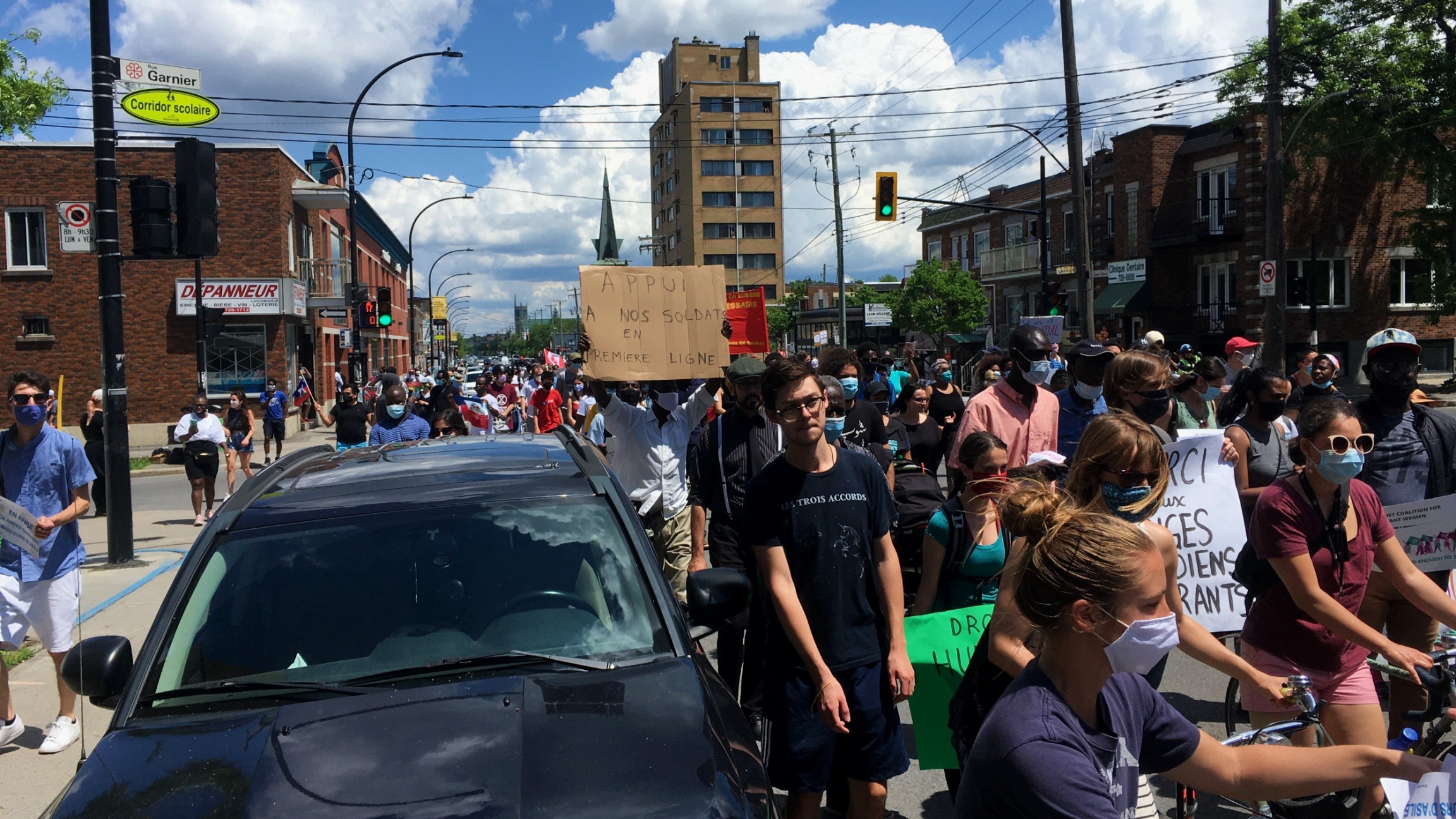 Protesters marching in Montreal hold up signs referring to "support for our soldiers on the frontlines," "Thank you to the immigrant guardian angels" and "Human rights for the guardian angels."

"We really wanted to place an emphasis on the exceptional contributions of the asylum-seekers who put themselves at the greatest risk."

Following the formal announcement, Michel reacted with mixed feelings — including a sense of relief that she will finally be able to solidify her own status in Canada. However, she expressed disappointment that many of her colleagues who do not work directly with patients were not included.

“The security guards who open the doors for us … the cleaning and maintenance staff who help keep us protected, the kitchen staff in these same care homes, they were forgotten,” she said.