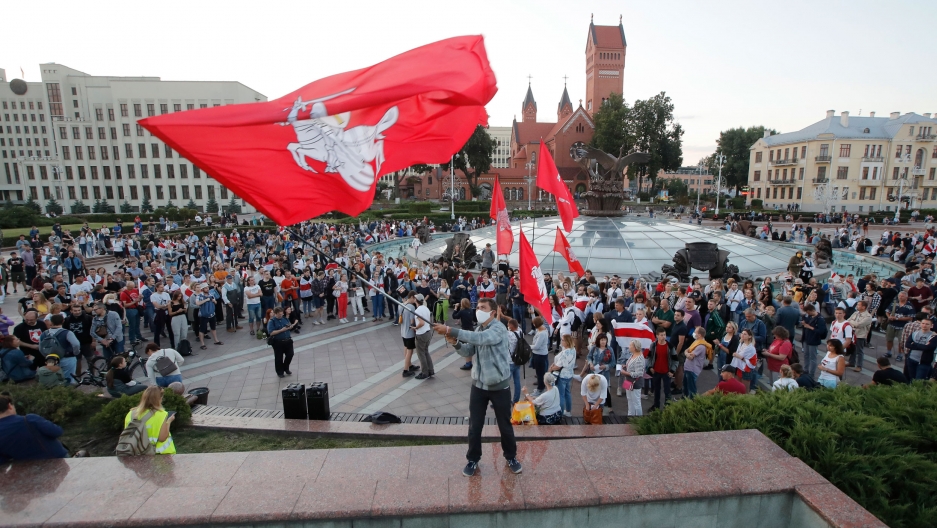 A protester waves a flag with an old Belarusian national emblem during an opposition rally at Independent Square in Minsk, Belarus, Monday, Aug. 24, 2020.

Authorities in Belarus have increased pressure on protesters, jailing several opposition activists and summoning others to appear in court.

Courts in Minsk were considering charges against two members of a council that opposition activists established last week to negotiate a transition of power following President Alexander Lukashenko's winning a sixth term in an election that critics contend was rigged.

Lukashenko has firmly rebuffed offers of dialogue from the Coordination Council, which rejects the official results of the Aug. 9 vote that extended his 26-year rule.

Pavel Latushko, a former culture minister and diplomat who joined the opposition council, was summoned for questioning over his role in the opposition body.

"They are trying to push me out of the country," Latushko told The Associated Press. "I have been threatened with arrest and prison violence, but I'm not planning to leave Belarus."

Belarus' most famous writer, Svetlana Alexievich, who won the 2015 Nobel Prize in literature, also received a summons after joining the council.

Lukashenko has dismissed the protesters who have been demonstrating for over two weeks as Western puppets and threatened the council members with criminal charges for attempting to create what he described as a parallel government. Prosecutors opened a criminal inquiry on charges of undermining national security, an allegation rejected by the council.

"The Coordination Council isn't attempting to take power," Latushko said. "All we want is to try to find a solution for the political crisis."

The protests in Belarus erupted after official results handed Lukashenko a landslide victory allegedly with 80% of the vote. They were galvanized by a brutal crackdown in the initial days after the election, when police detained nearly 7,000 people. Hundreds were injured when officers fiercely dispersed peaceful protesters with rubber bullets, stun grenades and clubs. At least three people died.

The bodies of two other opposition supporters also were found hanged in forests. Police declared that the deaths were suicides, but the opposition has contested the claim.

One of them, the 28-year-old Nikita Krivtsov, was buried Tuesday in the city of Molodechno, about 45 miles northwest of Minsk. He went missing on Aug. 12 after taking part in protests and his body was found 10 days later.

His widow, Elena Krivtsevich, said she has sent a formal request to the Investigative Committee, the nation's top investigative agency, to launch a criminal inquiry into his death.

"I don't believe that Nikita could have done it himself," she told the AP. "He was a cheerful and positive man, he liked his daughter very much, had a good job and a decent salary. He never expressed any thoughts about suicide."

On Aug. 18, the body of another opposition supporter, Konstantin Shishmakov, was found hanged in a forest in western Belarus. Shishmakov, who headed a small military history museum in Volkovysk near the Polish border, was a member of an election commission who spoke against alleged falsifications in the Aug. 9 balloting. Local police said they found no evidence of a crime, but the death has raised opposition suspicions of foul play.

The police crackdown fueled public anger, helping swell the number of protesters that reached an unprecedented peak of about 200,000 for two consecutive Sundays. The huge crowds forced the government to back off and allow the demonstrations to go largely unhindered for the past two weeks.

In another challenge to Lukashenko, thousands of workers at major industrial plants across Belarus have gone on strike to demand his resignation. 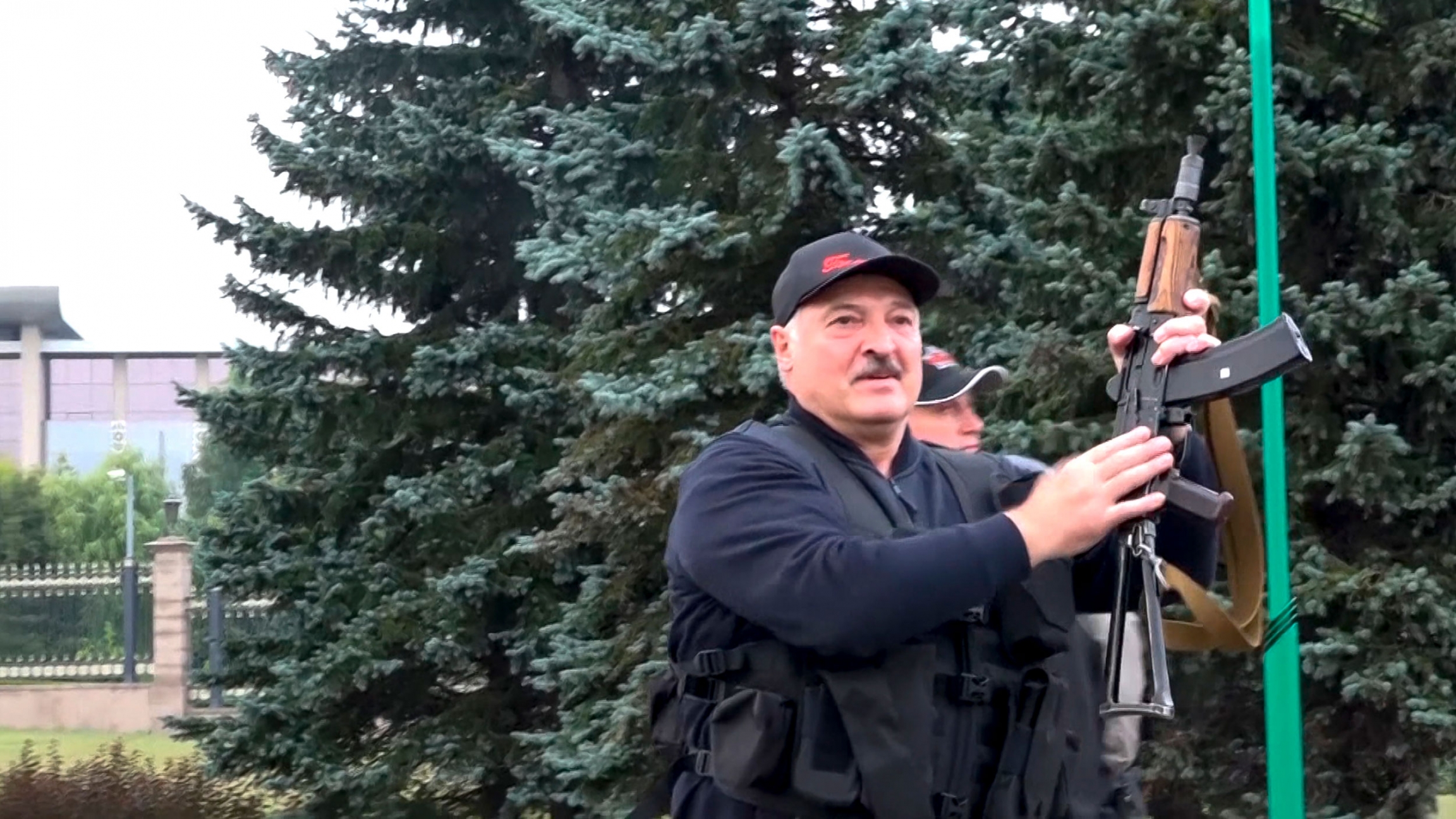 This image made from video provided by the State TV and Radio Company of Belarus, shows Belarus President Alexander Lukashenko armed with a Kalashnikov-type rifle near the Palace of Independence in Minsk, Belarus, Aug. 23, 2020.

State TV and Radio Company of Belarus via AP

In a show of defiance, the 65-year-old president toted an assault rifle as he arrived at his residence by helicopter on Sunday while protesters rallied nearby.

Following Lukashenko's directives last week to get tougher on protesters, police started beefing up their presence on the streets and cordoning off some areas in the Belarusian capital. They detained at least five protesters in Minsk and another five elsewhere in the country on Monday after days of inaction, a signal that the authorities might resort to force again to end the protests.

The Interior Ministry said Tuesday that it issued over 40 court summons to protesters the previous day.

As the authorities toughened their stance, Sviatlana Tsikhanouskaya, the main opposition challenger in the Aug. 9 vote, reaffirmed her push for a new presidential election in a speech to the European Union delivered via video-link from Vilnius, the capital of Lithuania.

Tsikhanouskaya, a 37-year-old former English teacher who moved to Lithuania a day after the vote following official pressure, said she was ready for dialogue with Lukashenko's government.