Amid global Black Lives Matter protests against police brutality earlier this summer, Roma activists marched through Bulgaria’s capital, Sofia. The Roma people are Europe’s largest ethnic minority and among its most persecuted.

Police intimidation is a fact of life for many Roma living in Bulgaria and elsewhere in Europe, according to activists, but in the last five months tensions have heightened due to the coronavirus pandemic.

As the virus spread to eastern Europe in early March, authorities in Slovakia and Bulgaria quarantined large Roma neighborhoods. Residents were barred from leaving without a valid work contract or other urgent reason. Bulgarian Interior Minister Mladen Marinov said police checkpoints at the entrance and exits of Roma districts were necessary to protect the rest of the population. 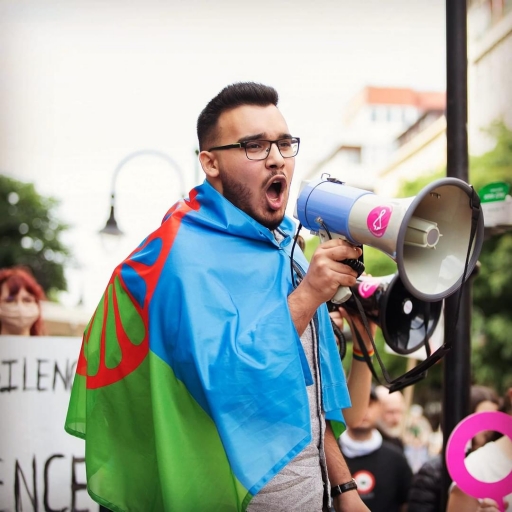 But Roma rights activists say the measures were excessive and often unregulated. Mihail Mishev with the Roma Standing Conference, a movement that works with Roma activists and organizations in Bulgaria, says the impact on some communities was devastating.

In Yambol, a town in southeastern Bulgaria, police closed off the Roma neighborhood and kept the district under strict quarantine even after the nationwide state of emergency ended. Mishev says most of the Roma residents lost their jobs as a result.

“Nobody could enter or exit the neighborhood. And more than a couple hundred people lost their jobs, which left them in a very bad position during the pandemic,” he said.

Police intimidation isn’t just limited to checkpoints outside Roma districts, according to the European Roma Rights Center. Their communications manager, Jonathan Lee, says there has been a noticeable uptick in the number of raids on Roma communities across Eastern Europe, and police also appear more aggressive in their actions.

Lee believes those carrying out the raids are taking advantage of the pandemic, knowing that nongovernmental and media organizations are not on the ground to document any unlawful behavior.

One particular incident caught on a smartphone in April made headline news in Romania. The video shows five Roma men tied up and lying face down on the ground. A sixth man can be heard screaming in pain as a police officer beats him. The video was shot by a female partner of one of the men in Bolintin-Vale, a town in southern Romania. A police officer in the video tells the woman to continue filming, that no one will take any notice, Lee says.

“You can hear the police officer saying in Romanian, ‘Why are you filming? You think anyone cares? These are just Gypsies. No one cares. You put this on Facebook.’”

A criminal investigation has been opened into the incident, but Lee says other examples of police aggression not caught on camera have been dismissed — despite complaints from his office. Cases of police violence against the Roma aren’t just confined to Eastern Europe. Lee says he has received reports of police brutality from communities in the Netherlands, Belgium and Ireland over the past few months.

In Britain, the pandemic has had a disproportionate effect on Black, Asian and minority ethnic groups. Black people are almost four times more likely to die of COVID-19, according to the UK Office of National Statistics, but no official data is available regarding its effect on the Roma.

Mihai Călin Bica with the Roma Support Group in the UK says the community there did suffer from a spike in infections in the early months of the pandemic.

One contributing factor was the lack of information available in the Roma language. But a bigger problem, according to Bica, is that many felt obliged to continue working as the country went into lockdown. Some chose to accept more hours as other workers were too nervous to stay on the job, but Bica says there were many cases of Roma feeling forced by employers to continue to work.

“Many of the Roma actually started to go to work more than before. And this was because their company was asking them to go to work when they had people from other communities who stopped doing that. As a result in March, April and May, we had a spike of cases including deaths in the community."

“Many of the Roma actually started to go to work more than before. And this was because their company was asking them to go to work when they had people from other communities who stopped doing that. As a result in March, April and May, we had a spike of cases including deaths in the community,” Bica said.

Many Roma live in tight communities and in shared living quarters where self-isolation is not an option if a person is exposed to the virus. In Slovakia, access to clean running water is a frequent challenge. Stefan Ivanco with the Center for Civil and Human Rights in Slovakia says basic tasks to prevent the virus from spreading — like washing hands — can be difficult.

NGOs and some local authorities have provided water tanks but that solution isn’t sufficient for the numbers affected.

Roma children are also struggling. In Slovakia, it’s estimated that at least 50% of Roma children attend segregated schools, often with poor-quality education, a factor that perpetuates a cycle of marginalization. The European Commission has already threatened legal action for continued segregation but Slovak politicians are reluctant to take action, Ivanco says.

“To put it simply there’s a lack of political will. Fighting against segregation in education is not a popular topic ... for non-Roma voters of government parties.”

“To put it simply there’s a lack of political will. Fighting against segregation in education is not a popular topic ... for non-Roma voters of government parties.”

When schools closed, many Roma children had little access to education. Homeschooling has been difficult for parents, some of whom haven’t completed their own educations.

In Britain, Roma children struggle to access online classes provided by schools. Bica with the Roma Support Group says it’s not just about internet availability but also a basic lack of understanding around how to follow classes online.

“Even if they had a smartphone in the house, they didn't know how to go online on that specific platform and access online classes or whatever the schools produced,” Bica says.

For most Roma communities, the pandemic has simply exacerbated existing systemic problems they face on a daily basis. In some countries, local authorities have attempted to provide assistance but the help is inconsistent. And widespread discrimination against the community persists.

Mishev, with the Roma Standing Conference in Bulgaria, who is himself Roma, says he often experiences racism first hand. Bars, restaurants and swimming pools regularly bar Roma people in Bulgaria, he says. Mishev recounts an incident when he went for a swim in a local pool one weekend. He was approached by a guard who told him he would have to leave, as the pool doesn't admit Roma on weekends. Mishev says they guessed he was Roma because of his skin color. He didn’t argue for long, he says, because he was afraid of what might happen.

“I tried to argue, but the guard there was a big guy. So I was kind of scared, thinking, ‘He might harm you.’”

The European Commission is set to release a new Roma strategy in October aimed at improving the lives of the Roma people across the EU, but activists are less than enthusiastic. The plan is unlikely to be made binding.

Lee with the European Roma Rights Center says the first thing governments need to do is to start including the community in policy decision making: “When they're designing policies that they know are meant for vulnerable or low-income people, the largest number of vulnerable and low-income people in the country, no matter the country, will always be Roma. Yet they're somehow rendered invisible to policymakers in these countries.”

Mishev in Bulgaria agrees. He says he would really like to see the Roma community and local authorities working together in a more structured way to solve the problems that they all face.

But he’s not holding his breath.