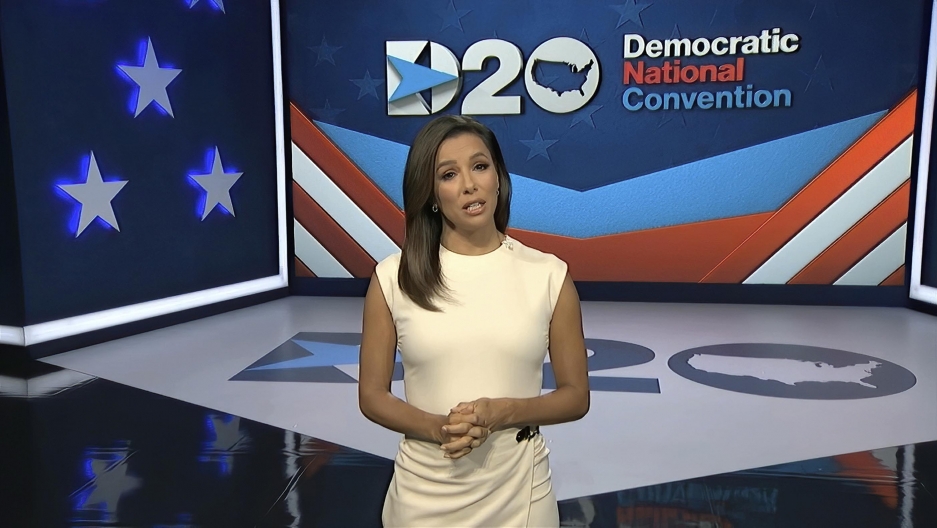 In this image from video, Eva Longoria, serving as moderator, speaks during the first night of the Democratic National Convention on Aug. 17, 2020.

With a record 32 million Latinos eligible to vote this year, many political observers expected to see lots of Latino politicians and representatives at the virtual Democratic National Convention this year.

But Latino organizations argue the programming missed the mark. Though many national Latino leaders are taking part in daytime DNC panels, only three Latinas made the prime-time slots. They include New York Rep. Alexandria Ocasio-Cortez, who will only get 60 seconds to talk Tuesday night and New Mexico Gov. Michelle Lujan Grisham and Nevada Sen. Catherine Cortez Masto.

“I am disappointed to see a lack of Latino leaders,” said Jess Morales Rocketto, executive director for Care in Action, a nonprofit advocacy group for domestic workers. Morales Rocketto is also a digital strategist who worked for the Barack Obama and Hillary Clinton campaigns.

The convention is the first time many voters tune in to the election and presents an opportunity to showcase what the Democratic Party can do for Latinos, she says. But with a lack of Latino representation, she adds, that might be a tough sell.

Related: As Election Day nears, it's not about winning the 'Latino vote.' It's about making a real connection.

Morales Rocketto and others expected Julián Castro, the only Latino to run for president this election cycle, to have a more prominent role during the convention’s televised portion. He did take part in other virtual panels, briefly speaking at the Hispanic Caucus Meeting the first day of the convention.  A Twitter hashtag #LetJulianSpeak trended the weekend before the convention’s start, signaling many Castro fans were unhappy.

“I’d be lying to you if I said I’m not disappointed that there aren’t more Latinos and Latinas generally speaking on that program, and that there’s not a Native American, not a Muslim American.”

“I’d be lying to you if I said I’m not disappointed that there aren’t more Latinos and Latinas generally speaking on that program, and that there’s not a Native American, not a Muslim American,” Castro said during an interview last week with MSNBC’s Alicia Menendez.

“If you think about the beautiful coalition that has become the Democratic Party over the last few years, I’m not sure it’s fully represented on that stage. But more important than the speaking, than the talking, is really the doing.”

Still, he says, he wants voters to focus on what presumptive Democratic nominee Joe Biden and his vice president pick, Kamala Harris, can do in a new administration.

The question remains whether the campaign has done enough to tap into an increasingly young Latino voting bloc, many who had been fervent Bernie Sanders supporters.

According to the Pew Research Center, members of the growing cohort of US-born Latinos tend to be young, with a median age of 20.

Many, like 18-year-old Izcan Ordaz from Texas, are not staying up to watch the DNC. But they are paying attention.

Related: BLM protests are shaking up how this young Latino voter views US politics

However, Ordaz says he hopes for more debate on an economic stimulus package and solutions to issues with mail-in ballots.

Many have criticized the Biden campaign’s Latino outreach as too little, too late. Still, one thing the campaign has done to attract Latino voters, about one-third of whom tend to vote for Republican presidential candidates, is to enlist Republican strategist and CNN political commentator Ana Navarro to rally Biden voters in Florida. Navarro, who fled communism in Nicaragua, is not a fan of President Donald Trump.

That may dilute some of the Trump campaign’s messaging of Biden and other Democrats as communists and communist sympathizers.

But Morales Rocketto, like many Latino activists, says the Biden campaign still needs to prove itself.