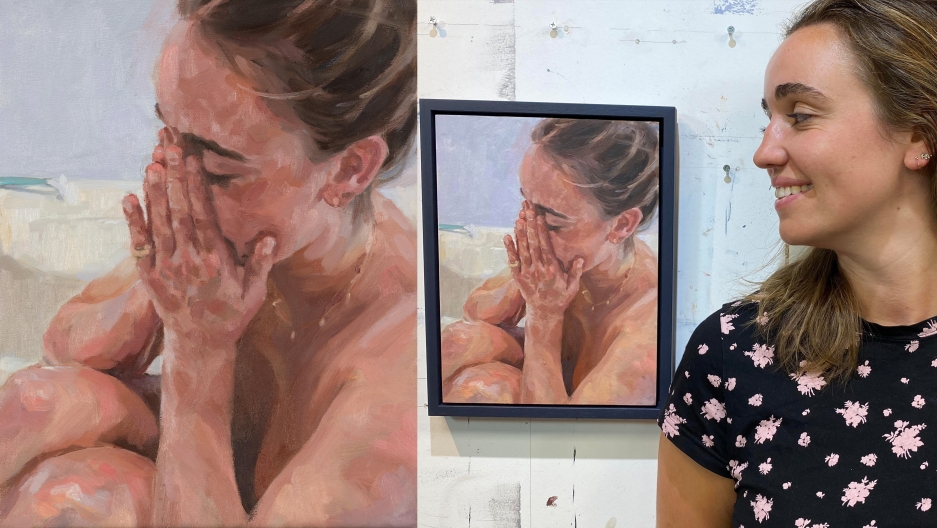 Dr. Georgina Keogh, a doctor at St George’s Hospital in London, stands beside a portrait of her painted by artist Jane Clatworthy as part of an NHS portrait series project.

Throughout the pandemic, artists have been processing our strange new reality in different ways.

One of them is an online portrait project that started on Instagram under the hashtag #PortraitsforNHSHeroes. The project paired artists with health care workers for the United Kingdom's National Health Service who were working on the frontlines of the coronavirus.

Related: Art in the time of COVID-19

It was started by an artist Tom Croft, who was inspired by a Thursday evening ritual during this spring's lockdown when people clapped for NHS workers to show their appreciation.

Wonderful to see my surprise portrait of Fatima has finally been received! Thank you @yetteyee for all that you are doing in these strange Covid times. And thank you @annekendi for organising this surprise gift. #portraitsfornhsheroes @tomcroftartist

"As lockdowns started, we were all left floundering and trying to find meaning," said Jane Clatworthy, a painter who took part in the portrait initiative. "And so Tom decided on the back of that as an artist, he could actually give a little bit of something back. And it's just a real way of acknowledging frontline workers who were taking on more than their usual duties."

Because of the lockdowns, artists and portraits could not meet in person for portrait sittings, so health workers sent artists their photos for reference. Most of the images depict health workers at work, their faces partially hidden beneath masks, scrubs and goggles.

@dibbenandrew This is Andrea, a nurse in the Intensive Care Unit at James Paget University Hospital, Gorleston. Andrea is a mother to young children, so has had a particularly arduous time over the last few weeks. Well done and thank you to her and all her colleagues for their difficult work during the pandemic. Oil on board 30x25cm. My thanks also to #tomcroftartist for starting this scheme to recognise the heroic efforts of our health workers. #watercolorpainting #akvarell #watercolour_gallery #akvarellmuseet #hudgrafblog #norfolk #bestofwatercolor #sennelier1887 #cartel_watercolorists #timetoart #northnorfolk #mynorfolk #tribenorfolk#saunderswaterford #eastanglianartists#yourartspace #portraitsfornhsheroes #oilportraits #portraitartist #portraitart

Clatworthy painted Dr. Georgina Keogh, a doctor at St. George's Hospital, from images Keogh sent of herself in the bathtub after work, crying into her hands as she tried to process all she had done and witnessed that day.

"In all honesty, when I received Georgina's images, I actually cried," Clatworthy said. "Because, you know, we'd met on Zoom and I'd seen this young doctor at the front and having to process quite a lot of grief. During the height of the pandemic, you're trying to come to grips with this new normal and just on it on a sort of day-to-day basis. Our lives, we had all been upended. But as a doctor, having to face a sort of virus that they didn't have the toolset. It was still unknown. They were still discovering."

"And every day on the news, they were announcing that the death numbers, and there's a lot of trauma there," Clatworthy continued. "So I was just really, really grateful that Georgina was so, so authentic and had chosen to share that vulnerability. So I felt incredibly humbled by that."

Keogh said she chose to send photos of herself in the bathtub because it felt "honest," given the patients she was seeing and stress of living alone. Keogh said the people she was living with left their home during the pandemic.

"I wanted to do one that kind of reflected how I'd been feeling about everything that was going on at work. And I wanted to be a bit more personal," she said. "A way that I relax was ... having a bath at the end of the day. Not much else we could do during lockdown. ...I guess it's just a release after work. I mean, obviously, it was a completely different time that we were working in. And lots of it was very new, and lots of it was really sad."

Clatworthy said she hopes her portrait of Keogh highlights the mental health issues around the pandemic.

"To actually create a portrait that will perhaps give other people the ability to experience their own emotions and to process, you know, it creates that space," she said. "I think other humans always respond to an authentic image that enables them to have that dialog."