Muslim pilgrims began arriving at Islam's holiest site in Mecca on Wednesday for the start of the hajj during an historically unique and scaled-down experience reshaped by the coronavirus pandemic.

The hajj is one of Islam's most important requirements, performed once in a lifetime. It follows a route the Prophet Muhammad walked nearly 1,400 years ago and is believed to ultimately trace the footsteps of the prophets Ibrahim and Ismail, or Abraham and Ishmael as they are named in the Bible. 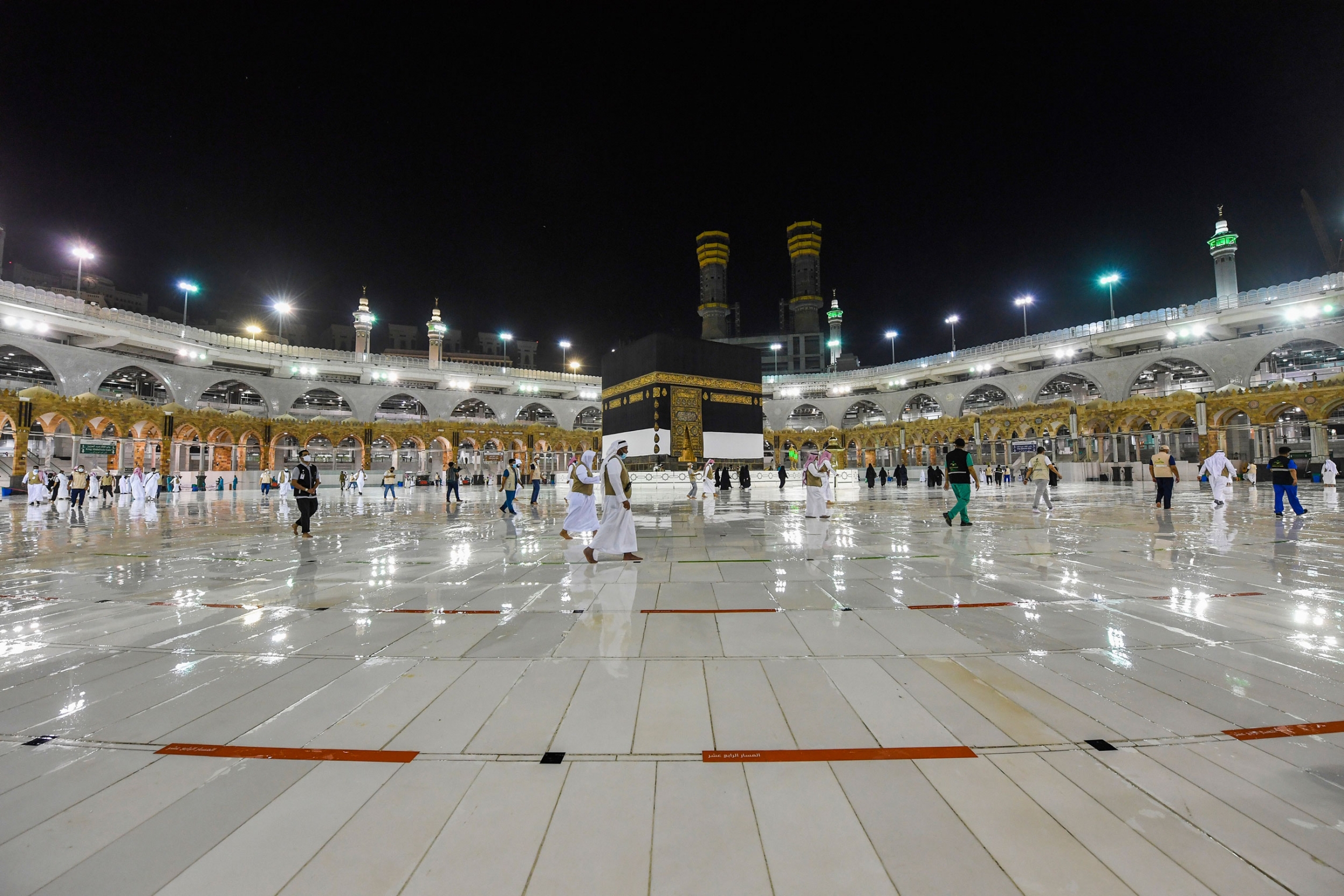 Officials prepare for the arrival of pilgrims in Mecca, Saudi Arabia hours before the pilgrimage is set to begin.

The hajj, both physically and spiritually demanding, is intended to bring about greater humility and unity among Muslims. 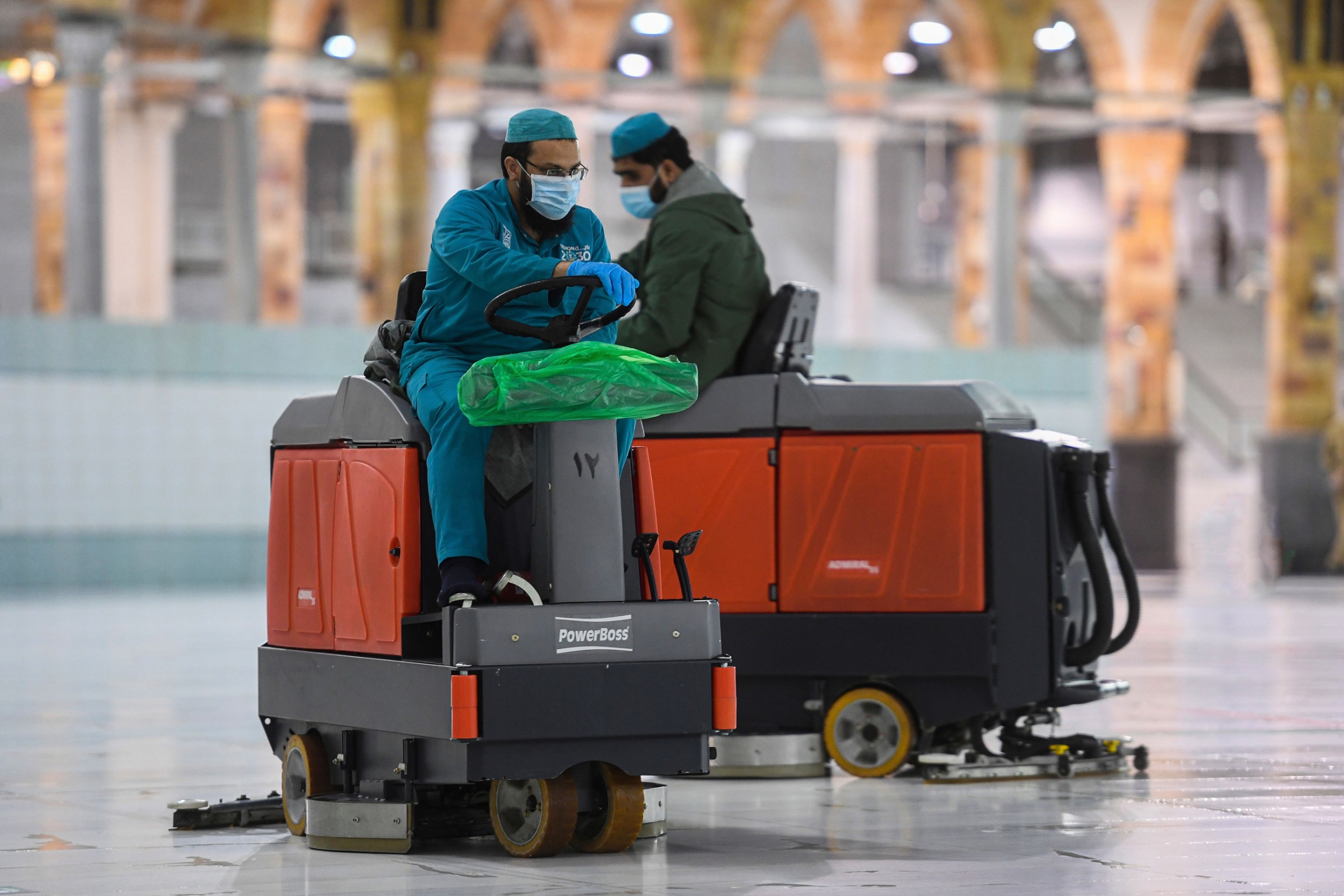 Rather than standing and praying shoulder-to-shoulder in a sea of people from different walks of life, pilgrims this year are social distancing — standing apart and moving in small groups of 20 to limit exposure and the potential transmission of the coronavirus. 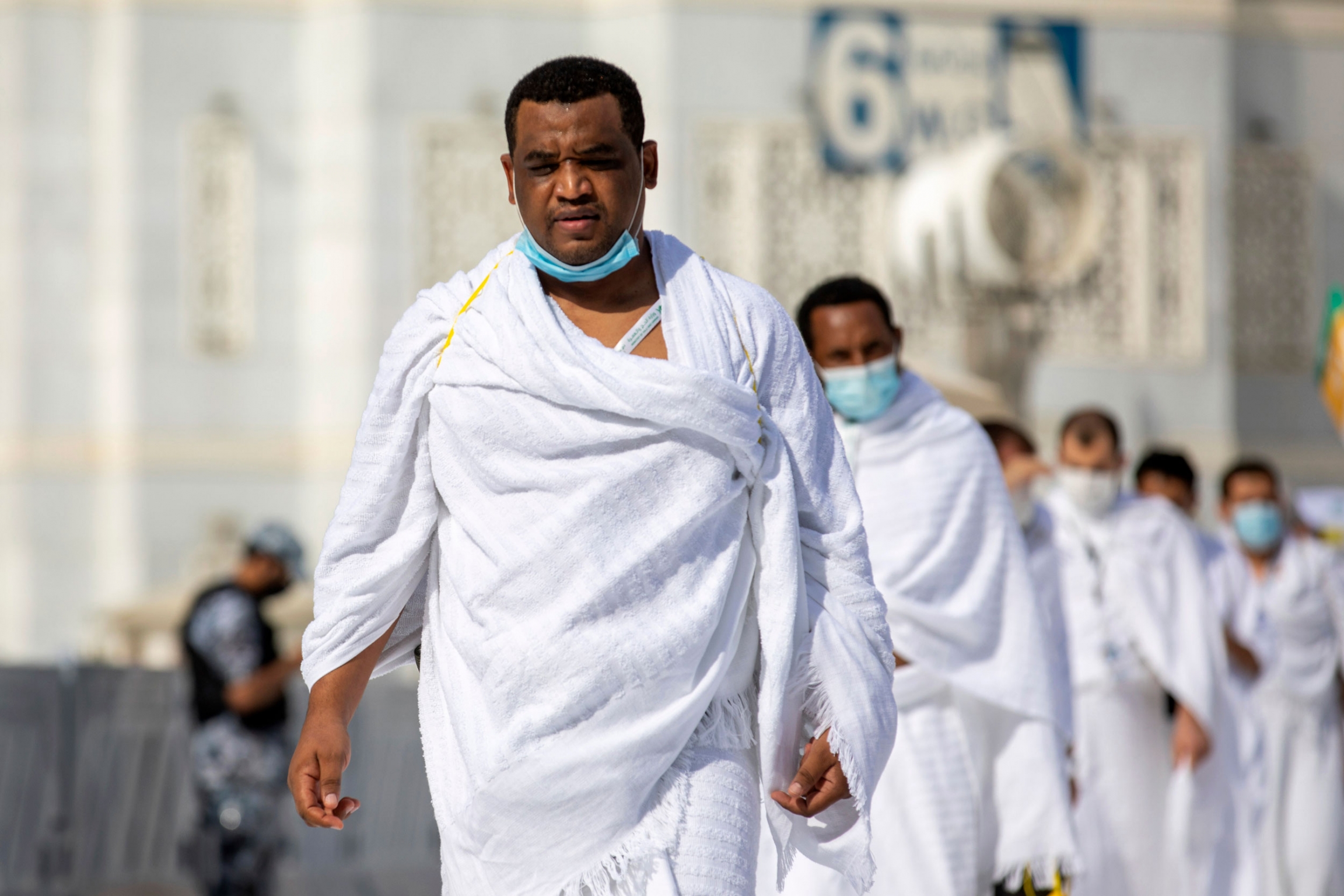 Limited numbers of pilgrims move several feet apart, circling the Kaaba in the first rituals of the hajj, Wednesday, July 29, 2020.

The pilgrimage is a journey that Muslims traditionally experience with relatives. In past years, it was common to see men pushing their elderly parents around on wheelchairs in order to help them complete the hajj, and parents carrying children on their backs. The communal feeling of more than 2.5 million people from around the world — Shiite, Sunni and other Muslim sects — praying together, eating together and repenting together has long been part of what makes hajj both a challenging and rewarding experience like none other. 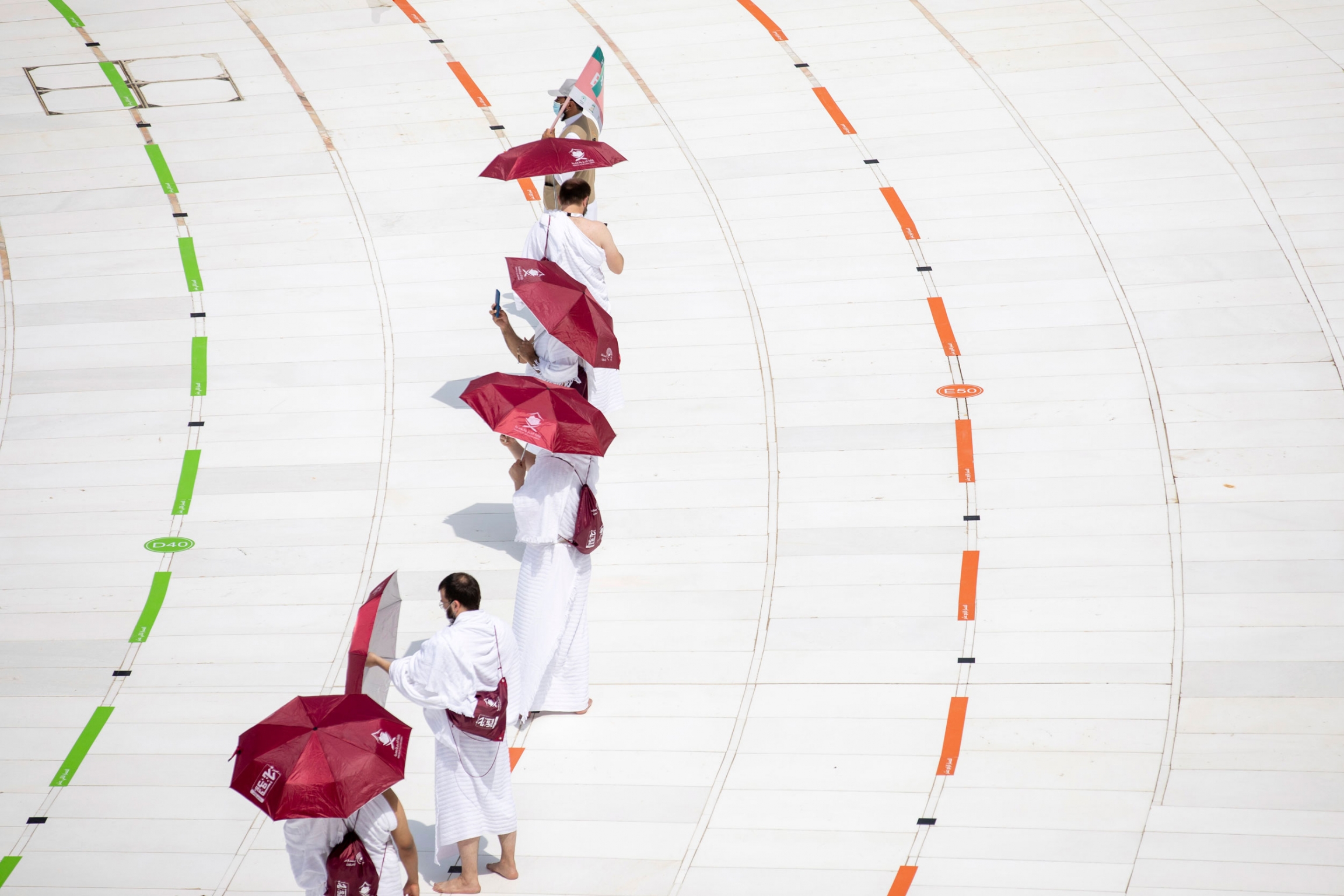 This year, however, pilgrims are eating prepackaged meals alone in their hotel rooms and praying at a distance from one another. The Saudi government is covering all the pilgrims' expenses of travel, accommodation, meals and healthcare.

While the experience is starkly different, it remains an opportunity for pilgrims to wipe clean past sins and deepen their faith. 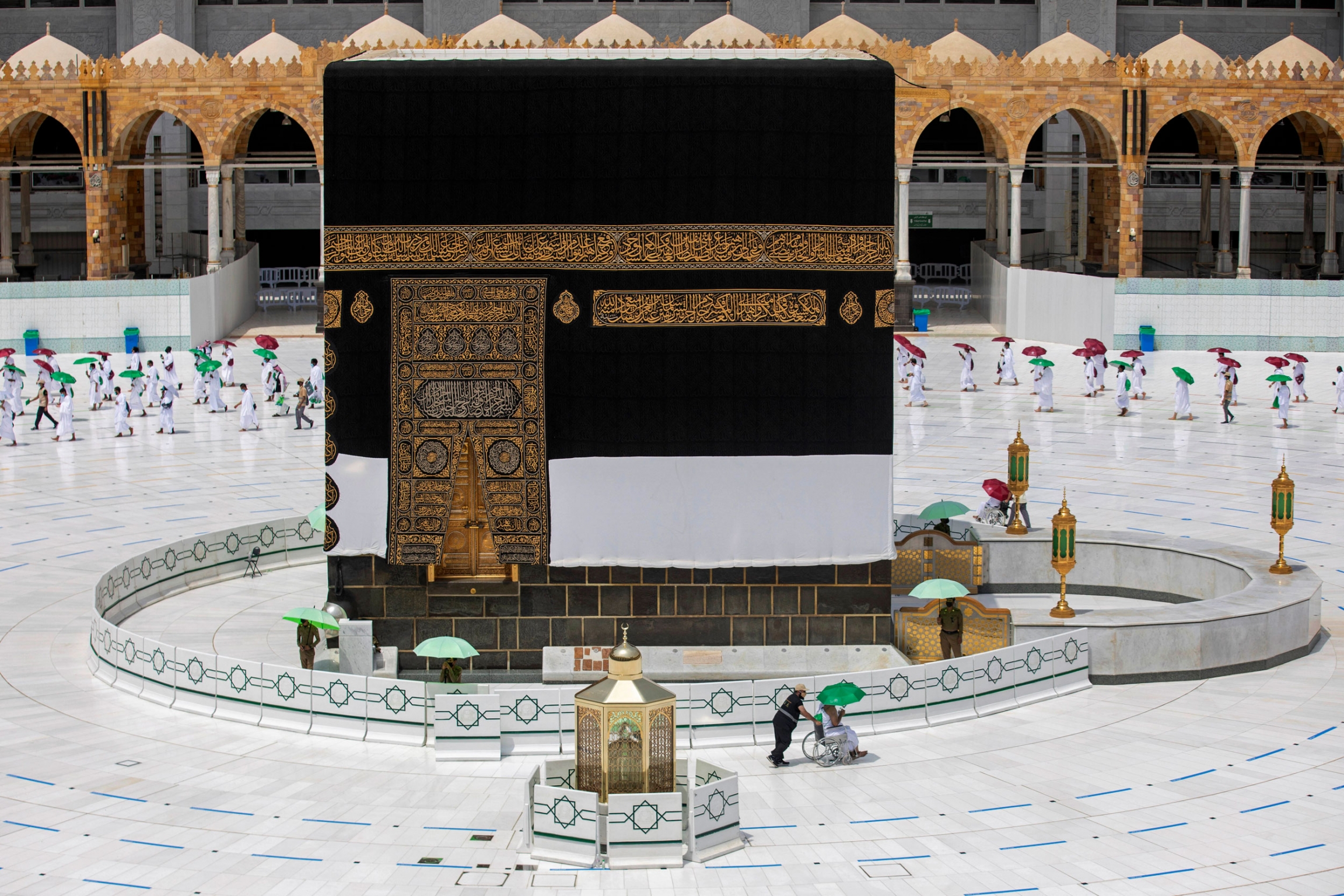 Pilgrims keep social distancing to limit exposure of the coronavirus, at the Grand Mosque in Mecca, Saudi Arabia.

For the first time in Saudi history, the government barred Muslims from entering the kingdom from abroad to perform the hajj in order to limit exposure of the coronavirus.

Instead, as few as 1,000 people already residing in Saudi Arabia were selected to take part in the hajj this year. Two-thirds are foreign residents from among the 160 different nationalities that would have normally been represented at the hajj. One-third are Saudi security personnel and medical staff.

The pilgrims, who were selected after applying through an online portal, were required to be between the ages of 20 and 50, with no terminal illnesses and showing no symptoms of the virus. Preference was given to those who have not performed the hajj before. 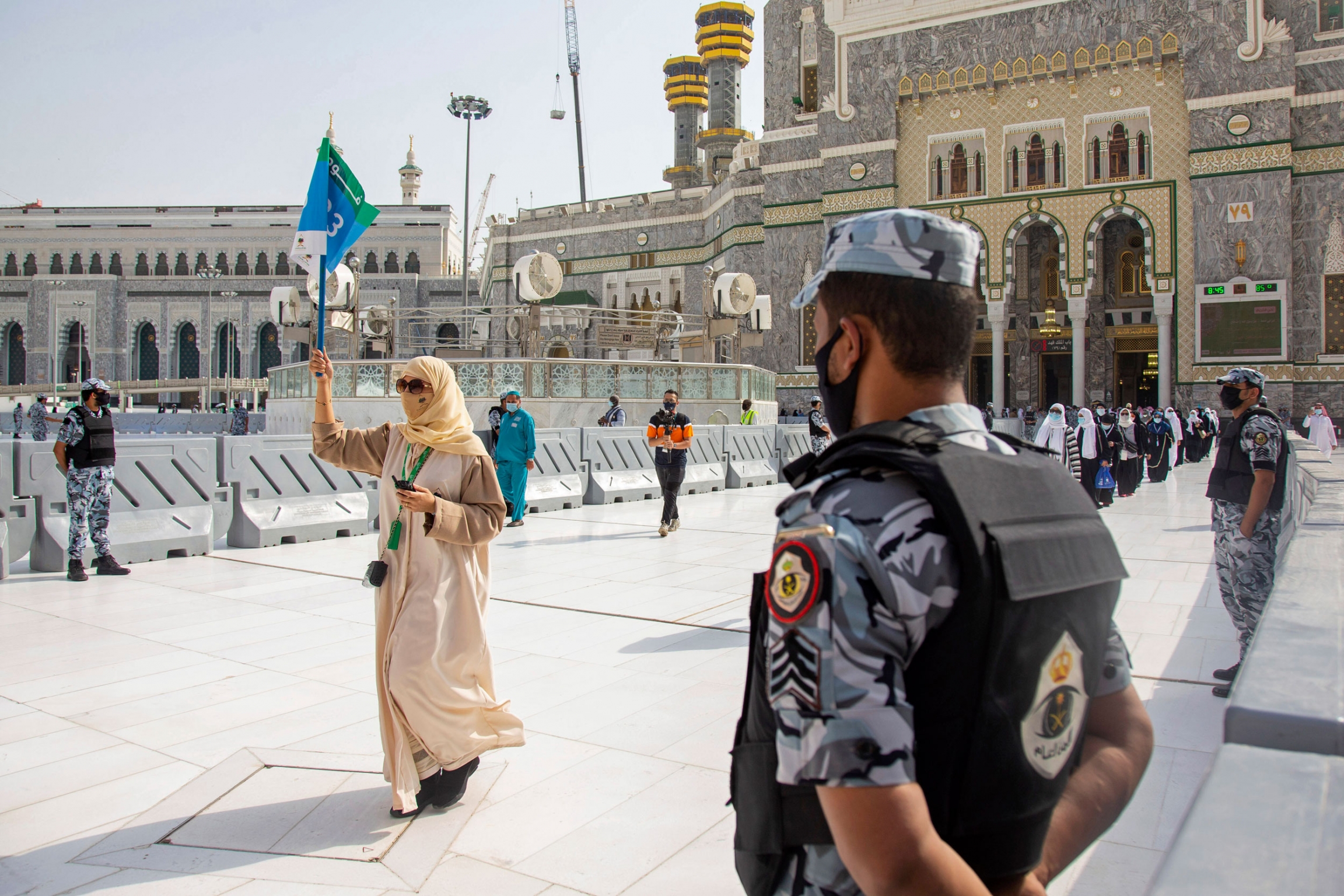 Security personnel standby as a limited numbers of pilgrims arrive at the Grand Mosque.

While there is a limited number of pilgrims allowed to participate in the hajj this year, like so many things in our lives these days, there’s a digital version. Bigitec Studios, a video game design company in Bonn, Germany has created a virtual hajj experience.

Bilal Chbib, cofounder of Bigitec Studios, says the company released a downloadable demo version of their hajj experience, but cautioned that it's not a substitute for the actual hajj — it's a virtual experience to help pilgrams prepare for the real thing. 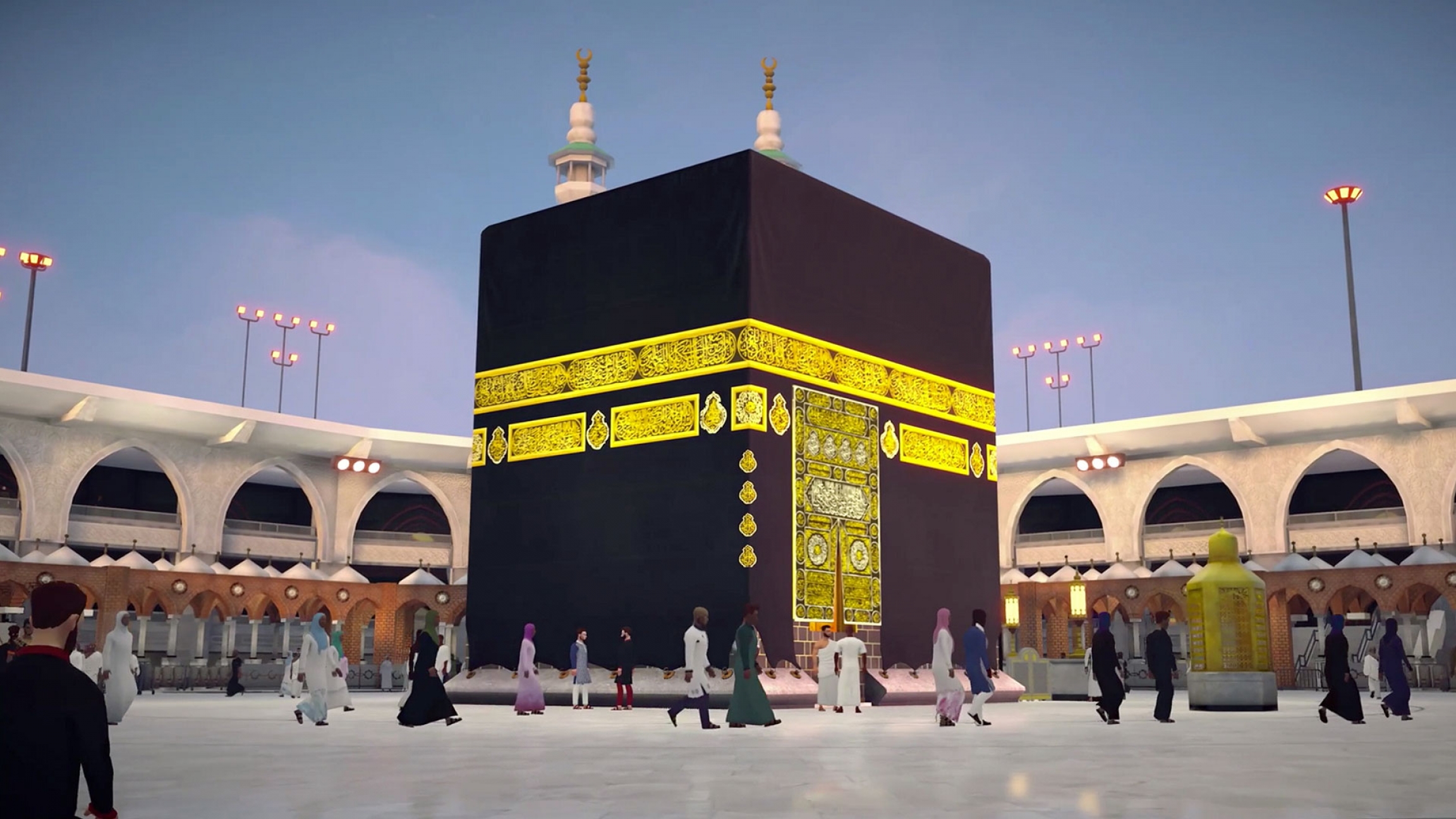 A virtual Kaaba which pilgrims walk around during the hajj at the Grand Mosque in Mecca, Saudi Arabia.

Mecca was sealed off for months ahead of the hajj, and the smaller year-round Umrah pilgrimage was suspended earlier this year, with pilgrims already in the city at that time flown back home.

International media were not permitted to cover the hajj from Mecca this year. Instead, Saudi government broadcast live footage from the Grand Mosque on Wednesday showing limited numbers of pilgrims, moving several feet apart, circling the cube-shaped Kaaba in the first rituals of the hajj. 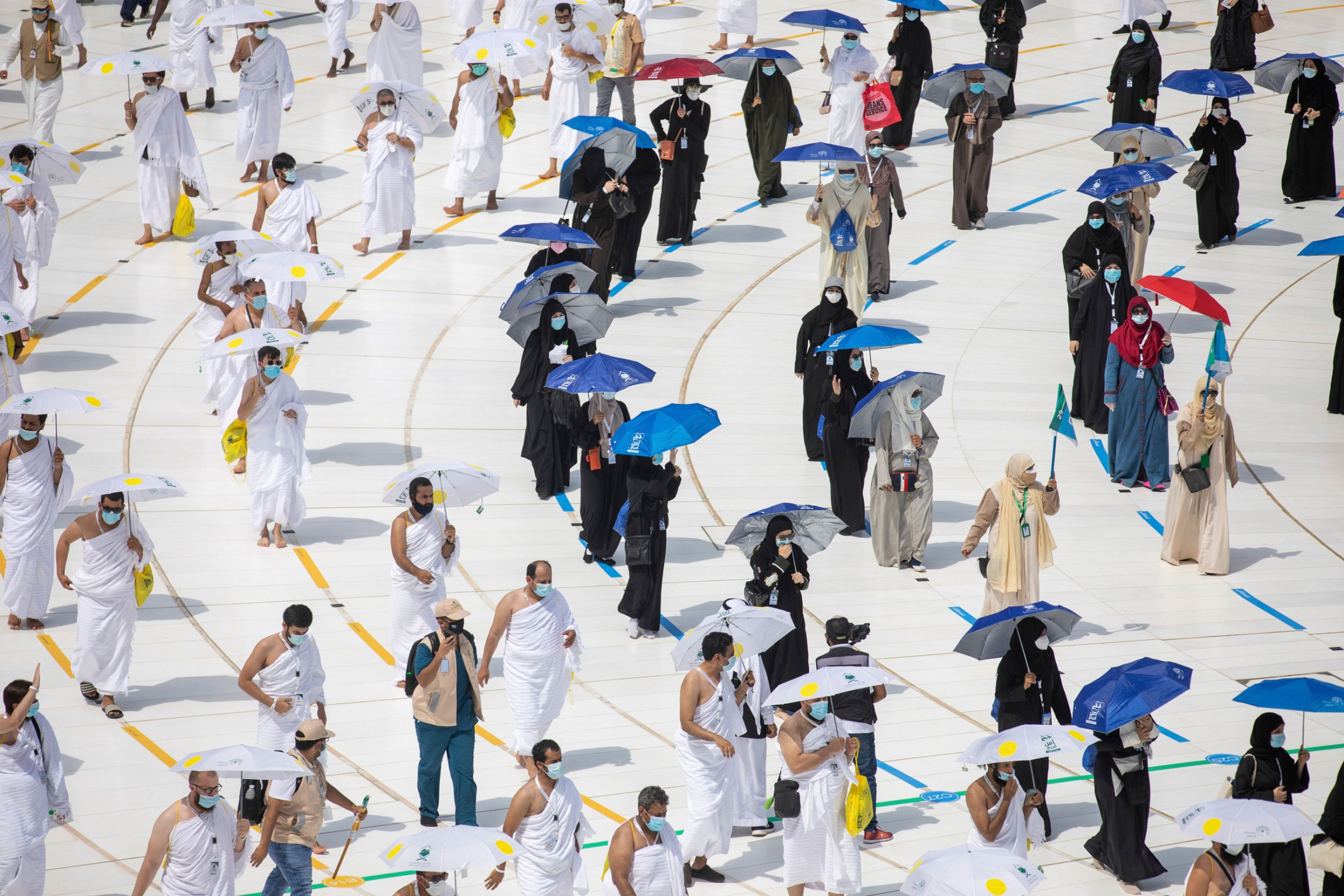 Pilgrim attend the hajj at the Grand Mosque.

The Kaaba represents the metaphorical house of God and the oneness of God in Islam. Observant Muslims around the world face toward the Kaaba during their five daily prayers.

During the first rites of hajj, Muslims circle the Kaaba counter-clockwise seven times while reciting supplications to God, then walk between two hills where Ibrahim's wife, Hagar, is believed to have run as she searched for water for her dying son before God brought forth a well that runs to this day.

This year, pilgrims will only be able to drink water from this Zamzam well that is packaged in plastic bottles. Pebbles for casting away evil that are usually picked up by pilgrims along hajj routes will be sterilized and bagged ahead of time. 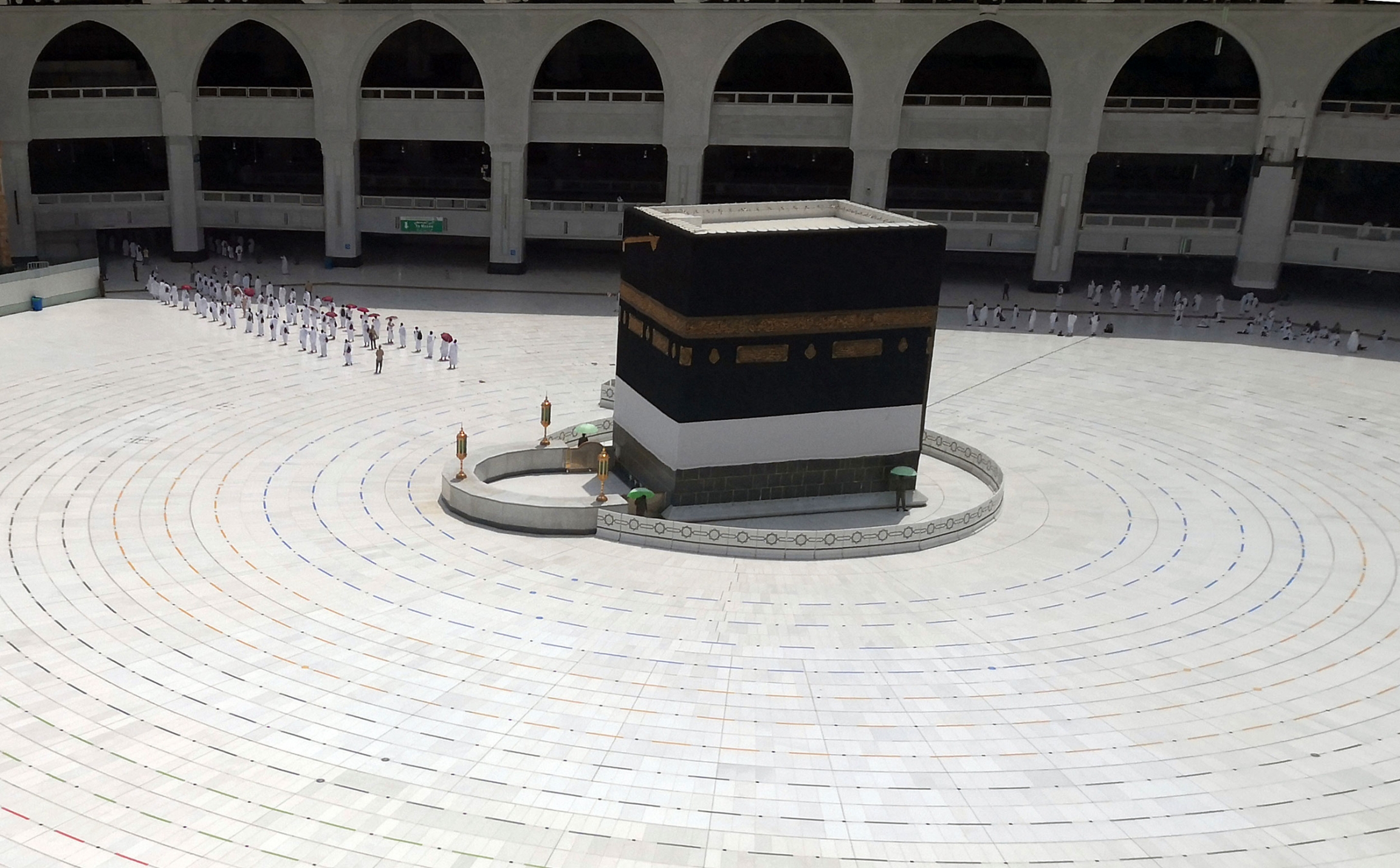 Muslim pilgrims line up to leave after they circled the Kaaba during the hajj.

Pilgrims have also been given their own prayer rugs and special attire to wear during the hajj laced with silver nano technology that Saudi authorities say helps kill bacteria and makes clothes water resistant. They were also provided with umbrellas to shield them from the sun, towels, soaps, sanitizers and other essentials, as well as online sessions in different language about what to expect on the hajj and the regulations in place.

"The kingdom of Saudi Arabia needs to put these measures in place so we can learn from this experience," said Saudi infectious disease expert and World Health Organization official, Dr. Hanan Balkhy.