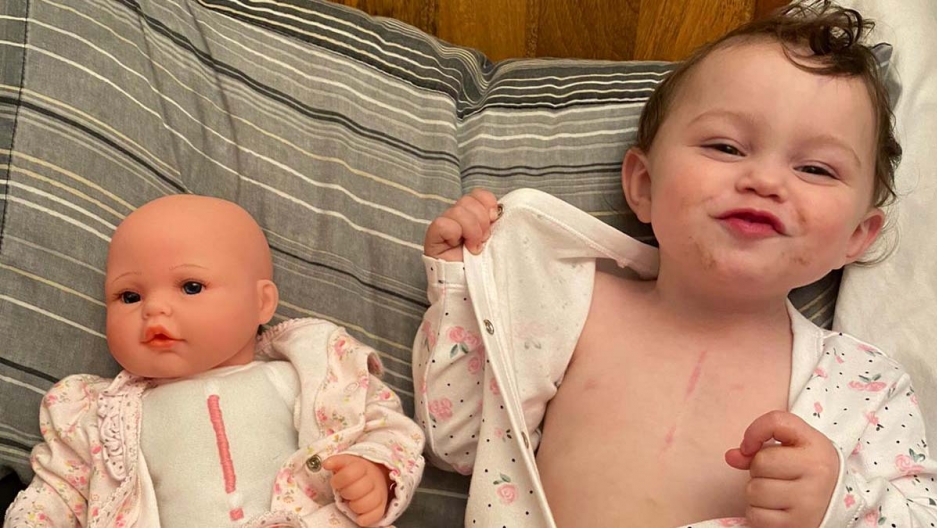 Two-year-old Lula-Belle Butler-Wenlock-Simpson, right, who was born with heart problems and underwent open-heart surgery, poses with a Special Friends doll whose scar mirrors her own.

Dolls have come a long way since the 1950s. One of the first TV commercials for Mattel Inc.’s Barbie doll sang: “Barbie’s small and so petite. Her clothes and figure look so neat.”

While modern-day dolls aren’t confined to quite as rigid looks, the industry still has room to expand its inclusivity — especially for children with disabilities.

That’s the challenge Victoria Band faced when her son was growing up. He is deaf in both ears and uses hearing aids. When he was younger, she wanted to give him a doll that also used hearing aids to show that he was not alone.

“So, if there was a doll there and they could say, ‘Oh, look, this is what you’re going to have in your ears. Look at all the different colors you could have’.”

“When he went to his [medical appointments], he’d say, ‘Mommy, it’s a scary place at first. You don’t know what’s happening. You don’t know what [the hearing aids] are going to look like’,” Band said. “So if there was a doll there and they could say, ‘Oh, look, this is what you’re going to have in your ears. Look at all the different colors you could have’.”

Band’s son, who is now 14 years old, said a doll like that would have helped massively — if only it existed. So Band, who has always been crafty, started making her own dolls last year. She called the business “Special Friends.”

Working from her home in Dewsbury, England, she now makes dolls who have scars, cleft lips, hearing aids, oxygen tanks, or anything else that matches a child's special needs. Many of the dolls are custom-made. 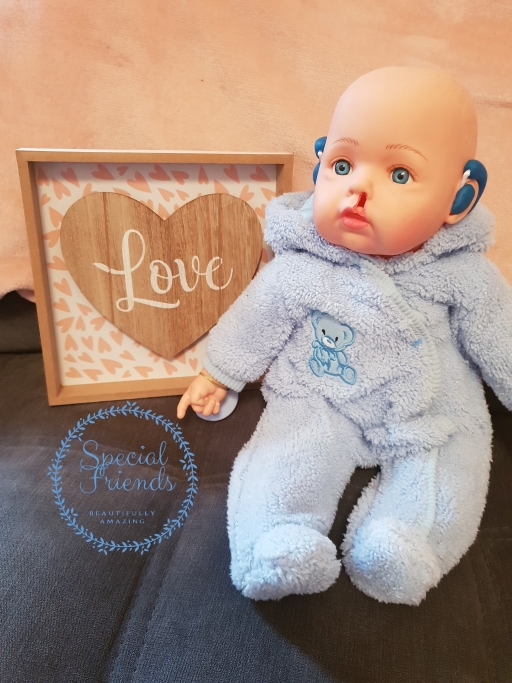 A Special Friends doll with a cleft lip and hearing aids.

“I just want to make something that will make a difference,” Band said.

In recent years, more toymakers have started rolling out dolls that resemble special needs children. But they're still rare.

Band’s handmade dolls have since helped hundreds of kids, including a little girl named Lula-Belle who was born with heart problems and had open heart surgery at 14 weeks old. Lula-Belle is 2 years old now and has a scar down the middle of her chest. Her mom, Sam Butler, found out about “Special Friends” on Facebook and ordered two for her daughter.

“When she got her first doll, she was like, ‘Mommy, scar! Scar! Scar! Me scar, me scar!’” Butler recalled. “And she pulled up her top. And she was matching scars with her baby. And it was nice that she had something that could relate to her.”

Butler’s second order from Special Friends was for a doll with a feeding tube, which Lula-Belle also used when she was younger, before her surgery.

“So she feeds her new doll now with the syringes that she used for that tube,” Butler said.

Special Friends has been up and running for less than a year, but Band has already sent dolls beyond the United Kingdom to Germany, the US, and Australia. She says seeing the reactions come in from around the world is priceless.

“You can’t ask for much more than seeing a child really happy,” Band said. “That’s worth more than anything.”

Band added that the dolls can also be used as an educational tool to teach kids about medical equipment, surgeries, and conditions they may not know about. People need to be “more aware,” she said, so that other children aren’t made to feel different in the first place.