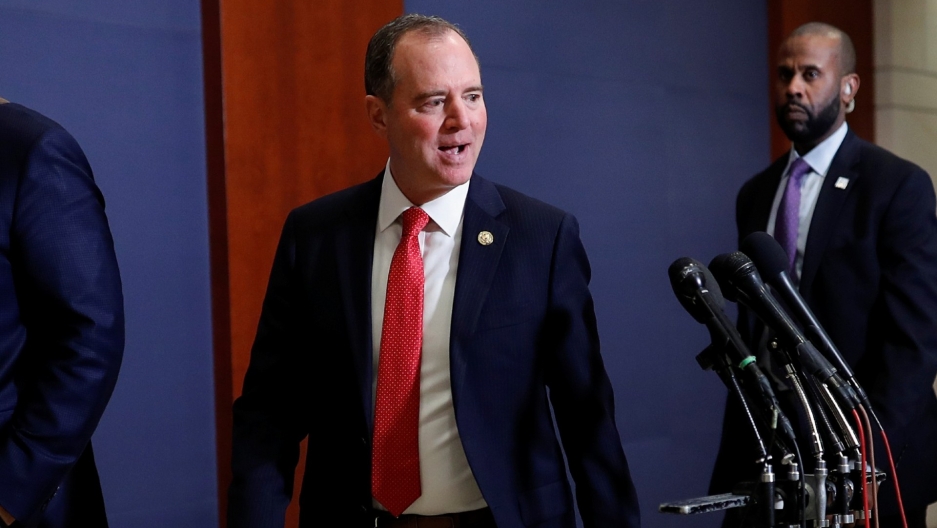 House Intelligence Committee Chairman Adam Schiff (D-CA) arrives for a national security briefing before members of the House of Representatives about how Russia has been using social media to stoke racial and social differences ahead of this year's general election, on Capitol Hill in Washington, US on March 10, 2020.

The last presidential election in 2016 was marred by charges of foreign interference. Today, fears are mounting that it could happen again. This week, Democratic lawmakers including  Rep. Adam Schiff, a Democrat of California who chairs the House Intelligence Committee, wrote a letter to the Federal Bureau of Investigation demanding a briefing on potential foreign meddling.

“Congress really needs to be briefed on this. It should go beyond simply members of the intelligence committees so that the Congress can protect itself against any foreign effort to interfere,” Schiff told The World. “Ultimately, I think the information should also be made public so the American people will know what our foreign competitors and adversaries are doing to try to influence the outcome of our presidential election.”

Schiff spoke to The World's host Marco Werman about why he thinks election interference is a threat during this year’s election and about possible Russian-backed attempts to smear former vice president and presumptive Democratic nominee Joe Biden.

Marco Werman: There are reports suggesting your concern is related to a possible Russian-backed attempt to smear former Vice President Joe Biden, his campaign, and that the Russian information is being funneled to a committee headed by Senator Ron Johnson. What can you tell us about that?

Adam Schiff: I can't go into the underlying information, but I can say that I think it's material that all members of Congress should be aware of so that no one is witting or unwitting in terms of what the Russians are doing and how they may seek to launder information through the US Congress. And I hope that all members would support being informed and join in calling for a briefing.

Laundering information through the US Congress — generally, can you differentiate between the kind of interference we saw in 2016 and what congressional interference might look like in 2020 or what its aim might be?

Yes. And I think it's important to point out that the modalities that a foreign adversary may use to interfere in election could take many different forms, and some may be consistent from one election to another and some may be very different. In 2016, we saw the Russians engage in a massive social media campaign. They created false personas, they organized protests in the United States that people thought were organic and local, but were in fact, driven out of cubicles in St. Petersburg. They also hacked democratic institutions and released documents to try to drive the campaign debate. They used their overt media as well. And this cycle, we're seeing some of those same tactics, but we also are seeing new tactics. Other nations may seek also to influence our politics in other ways. And I think those efforts should be exposed as well.

The director of the Department of Homeland Security's Cybersecurity and Infrastructure Security Agency said on Friday that he has not seen a foreign effort to influence US elections so far this year. He doesn't seem as worried as you are.

Well, he should be worried. I certainly am. I think people that are watching this and having an opportunity to review what our agencies are seeing are worried about this. And I think you have to have your head buried in the sand to think that foreign adversaries, Russia in particular, won't seek to intervene again.

I know part of the concern is tied up in the story of the work of a Ukrainian lawmaker, Andriy Derkach. He was educated in a KGB-backed school, was at one point close to pro-Russian political factions in Ukraine. In May of this year, he released tapes, including parts of telephone conversations between Biden, then the vice president, and Ukraine's president at the time, Petro Poroshenko. What did those tapes tell us and how high in your list of concerns are they?

Well, I think there is a kind of an eerie echo of what we saw in 2016 with the hacking and release of documents from the Clinton campaign. Now, we don't know the provenance of these recordings, but I think they're certainly being released with an eye towards trying to influence the election. Ukraine, as we saw and as we demonstrated during the impeachment trial, has been a fulcrum in terms of the US president's effort to solicit foreign interference and how foreigners may seek to interfere in our election. And as we heard in expert testimony during the impeachment trial from Dr. Fiona Hill, there were narratives that were being pushed out. In fact, they were being pushed out by Republican members of the House on the Intelligence Committee that I serve on, as well as the president himself, involving this crazy CrowdStrike conspiracy theory that the Democratic server was hidden in Ukraine somewhere and it was Ukraine that interfered in 2016. We had testimony that was actually Russian propaganda. And so there is a history here of Russian propaganda being amplified by our president and by some of his acolytes in Congress and the American people need to be aware of it.

Finally, on a different topic. Congressman, the White House and the Department of Homeland Security have been defending the use of federal officers during demonstrations in Portland, Oregon. Is their defense legitimate?

No, it's not legitimate. I think what they're doing is deliberately designed to provoke confrontation in Portland. That's certainly the view of those local officials in Portland who didn't request this federal help, don't want the federal help, saying it's making matters worse. And I'm particularly concerned about the degree to which Department Homeland Security is using its intelligence resources to gather information about protesters who are exercising their First Amendment rights. So I think it's a terrible abuse of power designed so that the president can claim that he is a law and order president, when in fact, the president is doing everything he can to stimulate disorder.

What do you think should happen? Well, what can be done?

Well, I think these federal law enforcement personnel in their camouflage should be immediately withdraw from these cities where they're, I think, much more likely to increase the conflict than they are to suppress it in any way.