Nordic countries have exported a slew of buzzwords to the rest of the world: Hygge, lagom and the made-up word pantsdrunk have all become the subject of coffee table books. But the Finnish word sisu has more substance than its predecessors. It may even have something to offer the rest of the world in these turbulent times.

Related: Kalsarikännit: Drinking at home in your undies, like Finns

What does sisu mean? It’s hard to come up with a straightforward translation. TEDx speaker André Noël Chaker said it’s like “courage on steroids.”

“I have a degree as a translator from Finnish into German, and I would dare to say that no translator can translate sisu into English or German with just one word,” said Roman Schatz, a German-born author and journalist.

Schatz has lived in Finland for the past 33 years. And, he’s written a number of books about his adopted country. In his first book, “From Finland With Love,” Schatz said that sisu only kicks in when you need it.

“It’s like a turbo for your engine or something,” he said. “You don’t need it unless you’re going uphill.”

As odds worsen, sisu allows you to become stronger. Over the past century, it’s been applied to everything from Finnish Olympians to the country’s battle against the Soviet Union in World War II. It’s even a Finnish brand of trucks and military vehicles.

Sisu has come to mean facing obstacles and working hard to overcome them. Whether you succeed or fail, you don’t draw attention to yourself.

This brings to mind Finland’s success with COVID-19: In a country of 5.5 million, they’ve had just over 320 deaths from the coronavirus. So far, they’ve succeeded in containing the disease. And they’re not making a big deal about it. By some measures, this might be quintessential sisu.

But you won’t hear Finns saying that. Because here’s the thing about sisu — traditionally, you don’t talk about it.

“Once you start talking about it, it's not sisu anymore. ... It's something that you should learn by not mentioning it.”

“Once you start talking about it, it's not sisu anymore,” said Tuomas Tepora, a historian at the University of Helsinki. “It's something that you should learn by not mentioning it.”

Tepora has written that sisu was “coined as a collective quality of a small northern nation who has been forced to endure a harsh climate and hostile neighbors.” He said that for many Finns, it’s one thing to talk about sisu to foreigners, but it can be kind of embarrassing to speak of one’s own sisu.

And yet, sisu is having a cultural renaissance of sorts.

“It's been promoted abroad as something of a trendy character at the moment,” Tepora said.

In fact, several books about sisu have come out since 2018. It’s also rising in popularity as a first name for children in Finland. And in Helsinki department stores, you can even find a new sisu-themed line of face creams.

But, until recently, it wasn’t an easy subject to study. 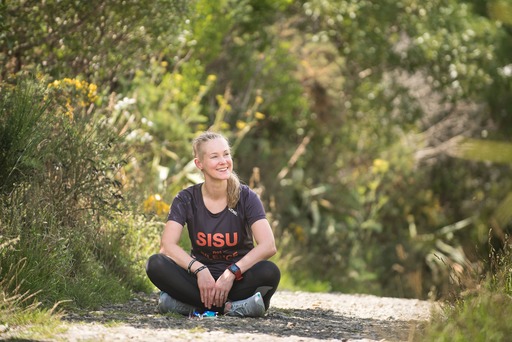 Emilia Lahti during an ultra long-distance run across the length of New Zealand in 2018.

“When I started researching sisu in 2012-13, there was really nothing on it,” said Emilia Lahti, a psychology researcher and the first person in the world to write a PhD on sisu.

Lahti also happens to know something about personal endurance. In 2018, she ran across the entire length of New Zealand in 50 days, all while making stops to talk with people about her past experience in a relationship that involved domestic violence. It’s part of a campaign she created called “Sisu Not Silence.”

Lahti dismisses the idea that some Finns have that once you start talking about sisu, it’s no longer sisu.

In the movie, the Brad Pitt character says: “The first rule of Fight Club is: You do not talk about Fight Club.”

“Sisu has been very masculine,” Lahti said. “You're supposed to be quiet, and you don't ask for help and you don't discuss your problems.”

For Lahti, sisu is not about keeping quiet. But she says that sisu is complex, and sometimes, a double-edged sword.

Schatz, the German-born writer, also sees a paradox in Finns’ understanding of sisu: Too much strength and resilience might lead you to accept things that you shouldn’t.

“This readiness to accept hardship, coldness, rain, sleet, it also has caused some sort of collective, it's the obedience of the lambs. ... Sisu might be misused as some sort of Prozac. We have to take it because we can take it.”

“This readiness to accept hardship, coldness, rain, sleet, it also has caused some sort of collective, it's the obedience of the lambs,” Schatz said. “Sisu might be misused as some sort of Prozac. We have to take it because we can take it.”

Prozac or not, something seems to be working. The United Nations’ World Happiness Report has ranked Finland the happiest country in the world for three years in a row. Many factors help explain this, like Finland’s stable democracy, and low levels of corruption and inequity. But Lahti said “happiness” isn’t quite the right word for it.

“I think the Finnish happiness is closer to contentment,” Lahti said. “It’s not the yeeeeaah! It’s more like mmmmm.”

Like sisu itself, maybe the Finnish form of happiness does not so easily translate.