Editor's note: The Crown Prosecution Service said on Monday it has decided to uphold its decision not to prosecute the suspect. They made the following statement: "The CPS decision not to prosecute the suspect was based solely on the two stage test applied to the evidence referred to us by the police. As part of the public interest, prosecutors are reminded that it is more likely that prosecution is required if the offence was motivated by prejudice, including on the grounds of race. There was nothing in any of the statements of the young people which suggested any racial issues or that this was a hate crime."

Thirteen-year-old Christopher Kapessa was a bubbly “live wire” who always made others laugh.

On July 1, the one-year anniversary of his death, about a hundred people gathered for a vigil in a parking lot near the soccer field in rural south Wales where Christopher loved to play.

“We were able to get some white doves representing Christopher and his siblings.”

“We were able to get some white doves representing Christopher and his siblings,” said Hilary Brown, the family’s lawyer.

Last year, Christopher drowned when a schoolmate allegedly pushed him into a river. That day, Christopher was the only Black child among a group of kids, Brown said. He and his family had been the target of racial attacks ever since they had moved to Wales in 2011, she added.

Earlier this year, the family accused the police and judicial system of systemic racism for failing to prosecute the suspect. Now, the family awaits a decision on an appeal they filed with the Crown Prosecution Service, which earlier decided not to charge anyone with his manslaughter. 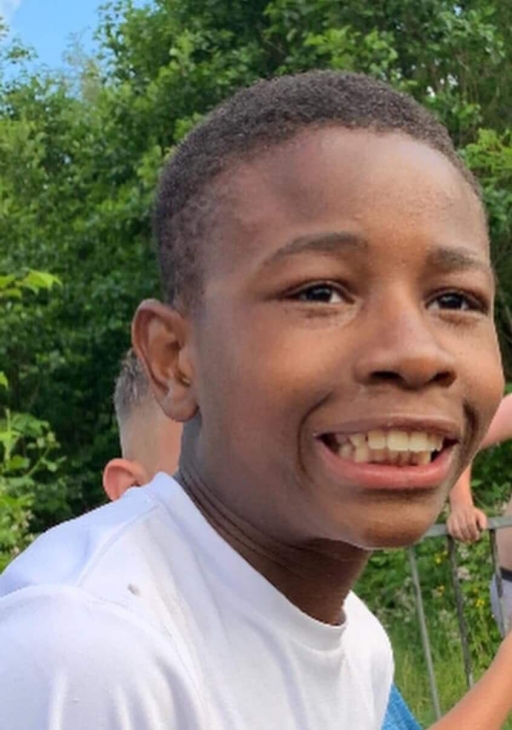 Thirteen-year-old Christopher Kapessa is remembered for his playfulness, energy and good humor, friends and family say.

CPS’ decision is expected to come out on Monday. For the family and others advocating for them, it’s been daunting trying to pursue justice for Christopher. But the global momentum around the Black Lives Matter movement has given some renewed hope that CPS will agree to prosecute the crime.

In May, George Floyd, a Black man, died after a white Minneapolis police officer knelt on his neck for nearly nine minutes, sparking protests the world over — including in Wales. Brown, who organized a protest in her area, says the activism has changed the discussion.

“It has focused a lot of people's attention to the frequency of injustice for the Black community, which hopefully increases the amount of anxious scrutiny that the justice system comes under,” she said.

Brown first met Christopher back in 2018 while helping his mom, Alina Joseph, with a housing issue. Joseph and other family members are not speaking to the media in the leadup to the CPS announcement, the attorney said.

“Christopher was probably the most bubbliest live wire you could ever wish to meet,” Brown said.

The day after Christopher died, Brown drove to be with Joseph, who is a single mom with six other young children.

“I believe she is either the only or one of two Black families that live in the area,” Brown said. “And so, I thought it would be absolutely necessary for myself and my colleagues, two other Black women, to travel up to speak with her.”

When she got there, she found Joseph in a state of shock.

“She was being told that Christopher sadly died as a result of no more than a tragic accident.”

“She was being told that Christopher sadly died as a result of no more than a tragic accident,” Brown said, referring to the police account.

But it wasn't clear how Christopher, who couldn't swim, ended up in the water. First, the story went that he jumped in the water, and then, that he had slipped. Later, families in the community came forward saying they believed Christopher had been pushed.

Joseph and Brown started to have doubts about the police investigation. There were at least 14 witnesses to Christopher's death, but initially, the police interviewed only four.

And that wasn't all.

“We had gone to visit the scene and was absolutely dismayed to find out that the scene hadn't been seen secured,” Brown said. “People were walking through it.”

There was something else Brown thought the local police weren't taking seriously but that she, as a woman of color, immediately thought about. Since moving to Wales in 2011, Joseph and her family had faced racist bullying and harassment.

“There was a physical attack on one of her children and her 5-year-old daughter was urinated on,” she said. “The family received threats, letters, abusive phone calls, graffiti and all of the usual very unpleasant ways that people can try to terrorize and intimidate you.”

In fact, the abuse made Joseph extremely nervous to let her children go out. But that day, Christopher had begged and pleaded.

“Christopher was the only child in the family who truly believed in integrating with his peers,” said Suresh Grover, the director and founder of The Monitoring Group, an anti-racism group that has supported the family since Christopher’s death. He didn’t know Christopher personally but has heard many stories from the family.

“He played football with them. He got abused, but he persisted. He kept his head up and tried to overcome it. He was somebody who thought he could overcome any obstacle in front of him just by sheer laughter and joyful existence.”

“He played football with them. He got abused, but he persisted. He kept his head up and tried to overcome it. He was somebody who thought he could overcome any obstacle in front of him just by sheer laughter and joyful existence.”

Grover’s group helped the family lodge its formal complaint about the investigation into Christopher’s death.

“It was abundantly clear, right from the outset, that the police had failed in the initial investigation,” Grover said. “They didn’t just fail on the race issue. They failed on the investigative issue and in terms of protecting the child.”

Eventually, a new investigative team was brought in despite some objections in the community to reopening the case.

“It could never be a complete investigation because of the failure of the first investigation,” Grover said, highlighting the fact that the crime scene wasn’t secured and that, by the time some of the child witnesses were interviewed, months had passed.

Finally, after months of work, the investigators handed over their findings to the Crown Prosecution Service. In February 2020, CPS sent a letter stating it “had decided that although the evidential threshold for a charge of manslaughter was met, it was considered not in the public interest to charge anybody with his manslaughter,” Brown said.

It acknowledged that “there was clear evidence that the suspect pushed Christopher in the back with both hands causing him to fall into the river” and that it was an unlawful act.

But CPS didn’t think it was “in the public interest” to prosecute the boy who allegedly did it. They argued that the point of the youth justice system is to make sure a minor doesn't re-offend. The suspect, they said, “is described as mature and intelligent for his age” and had never come to the attention of the police before. They didn’t believe he’d do something like this again and said they had to consider “the adverse impact of a prosecution on his future prospects.”

“I had this overwhelming feeling that the Crown Prosecution Service had considered it a priority to protect the young boy and placed no value on the life or death of Christopher.”

“I had this overwhelming feeling that the Crown Prosecution Service had considered it a priority to protect the young boy and placed no value on the life or death of Christopher,” Brown said. “I believe that had it been a different situation where 14 or 15 young Black boys and girls were present and an incident led to the death of one white boy, I honestly and firmly believe there would have been arrests, and there would have been charges.”

Grover feels like he’s been here before. He worked with the family of Stephen Lawrence, a Black teenager who was stabbed to death by a group of white youths in London in 1993. The campaign around his murder after CPS’ failure to prosecute suspects prompted a cultural shift in terms of the recognition of racism within Britain's criminal justice system.

A groundbreaking inquiry in 1998, The Macpherson Report, found the Metropolitan Police to be institutionally racist and suggested a list of reforms. But many of those reforms were never implemented, Grover said.

“Despite a massive campaign and movement to tackle systemic racism, the national priorities shifted and systemic forms of racism weren’t dealt with,” Grover said. “So, for BLM to start raising that to the national, even the international level, will help families like Christopher. I hope the tenacity of people like Alina and the ferocity of the BLM movement against injustice will swell into positive changes.”

Although CPS said it couldn’t comment on the matter until its decision is announced, press officer Yasser Mehmood responded to The World’s question about whether they are currently working to address systemic racism within their organization.

“There isn’t a review but it’s important to stress that the CPS makes its decisions regardless of race or background. Our work is demand-led, so we make charging decisions on cases referred to us by the police — we don’t carry out investigations ourselves. Every decision we make is done independently and impartially based on whether our legal test is met,” Mehmood wrote.

In the coming months, he said, CPS will be “engaging with a diverse range of stakeholders to examine the criminal justice impacts of Covid-19 and the Black Lives Matter movement on communities, including black and minority ethnic communities.”

The South Wales Police said that it, too, awaits the CPS outcome in the family’s appeal, and it has referred the case to the Independent Office for Police Conduct to examine the police response.

“We will be absolutely committed to implementing any opportunities for learning by South Wales Police.”

“We will be absolutely committed to implementing any opportunities for learning by South Wales Police,” the police said in a statement. “We can only imagine how difficult the past year has been for Christopher’s family during this time and the pain and grief that they are enduring as a result of losing Christopher in the most tragic of circumstances.”

“The death of Christopher deeply shocked the local community as well and we are working closely with support agencies to ensure the right help is there for all those that need it,” it added.