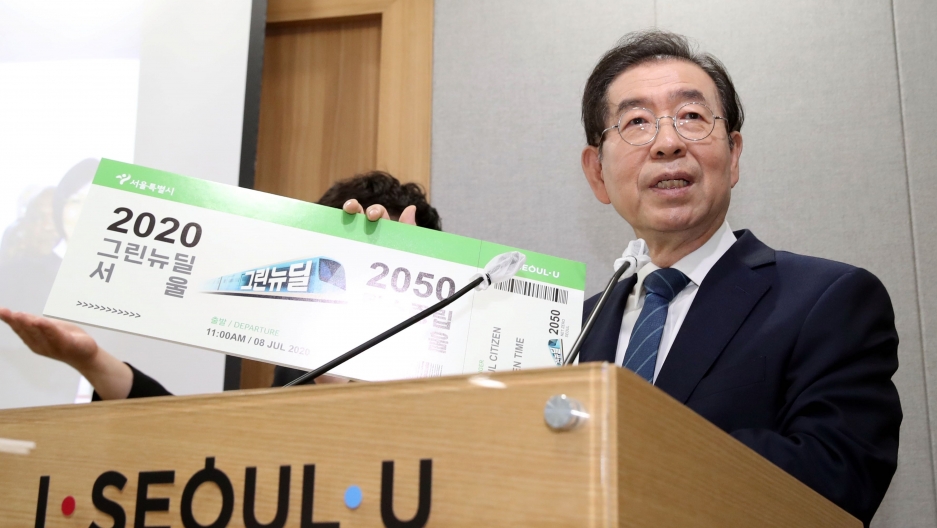 South Koreans are mourning the death of Park Won-soon, a prominent liberal politician and presidential hopeful. But the Seoul mayor’s apparent suicide this week coincides with reports that he was under investigation for sexual harassment — casting a shadow over his progressive legacy.

Seoul will commence five days of official mourning for Park, who was in his third term as the capital’s mayor. An altar will be set up in front of City Hall for those looking to pay their respects, starting on Saturday.

On Thursday, Park had canceled his official schedule and was later reported missing by his daughter. After an hourslong search that involved hundreds of officers, sniffer dogs and drones, authorities discovered his body alongside a mountain not far from his residence in Seoul.

The cause of death is under investigation, but officials say there were no signs of foul play. Park was 64.

The Seoul Metropolitan Government released on Friday what it says was a note found in Park’s home in which he apologized to his family and asked for his ashes to be spread near his parents’ graves.

As the search for Park was underway, it emerged that a woman who had worked with the mayor had filed a complaint against him a day earlier, accusing him of inappropriate touching and sending explicit messages.

Seoul’s police say they received a complaint about Park and had opened an investigation. The agency has not confirmed the nature of the accusation but says it has closed the case following his death.

Throughout his career, Park had been hailed as a champion of progressive political and social causes, including defending women’s rights in cases of sexual abuse. But in light of these allegations, his legacy as a torchbearer for South Korea’s left has become much more complicated and has shocked the nation.

The Seoul mayorship is considered a springboard to the South Korean presidency and Park had led an unsuccessful campaign for the country’s top job in 2017. He was widely expected to give it another shot in 2022 when the term of his fellow Democratic Party member, President Moon Jae-in, comes to an end.

Daniel Oh, a professor in urban design at Korea University, says the late mayor will be remembered as someone who worked closely with grassroots organizations in order to change the kind of “top-down” approach to governance practiced by his predecessors.

“Park insisted we should put public value or public benefit before any individual or private interest. That resonates through everything that he did.”

“Park insisted we should put public value or public benefit before any individual or private interest,” he said. “That resonates through everything that he did.”

Oh says it’s hard to reconcile the allegations against Park with his work for the city.

“Seoul is a much better place, and we should give mayor Park credit for that,” he said.

Some of Park’s most notable urban restoration projects included remodeling a 1970s-era elevated highway overpass into a tree-lined promenade; turning an abandoned stretch of railroad tracks into a walking and cycling path, and transforming an oil depot into an art exhibition space.

He also won praise for working with citizens who had fought to save their community from redevelopment — or the complete leveling of an entire neighborhood.

“To have a mayor who was thinking about what citizens want was a shocking, wonderfully new experience,” for many of Seoul’s residents, said Robert Fouser, author of books on Korean politics and urbanism. “So that to me, Mayor Park’s legacy is about empowering citizens to think about their city and express their ideas about how they want their city to be in the future.”

South Koreans have largely expressed sympathy toward Park and his family on social media, and political leaders have offered condolences.

But some Korean women’s groups have called on authorities to follow through with the investigation into the late mayor, according to The Guardian.

And one politician from a competing liberal party posted on Facebook that she would not express her condolences because it would “cause a secondary injury” to Park’s alleged victim.

Kim Hyun-chung, a psychiatrist who previously worked at a hospital in Seoul, says it is not uncommon for some people in power in South Korea to end their lives rather than face public scrutiny.

“Political figures and even celebrities, when they were in a situation that they couldn’t handle or was too humiliating, they just took their lives.”

“Political figures and even celebrities, when they were in a situation that they couldn’t handle or was too humiliating, they just took their lives,” she said, adding that this somehow seems preferable to “apologizing for the hurt it might have caused.”

In 2009, former South Korean President Roh Moo-hyun died from suicide while his family was being investigated over alleged corruption. That case was also closed following Roh’s death.

Kim said that she’s worried that the late mayor’s supporters might blame his accuser for what happened.

“If she feels guilty and ashamed” about reporting Park to the police, she might start to believe that she killed him, Kim said.