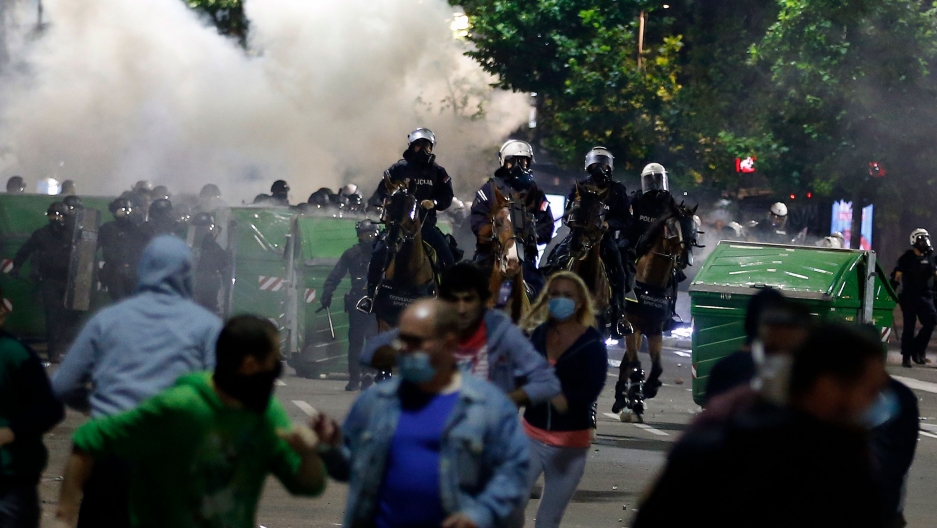 Sebian police officers disperse protesters in front of Serbian parliament building in Belgrade, Serbia. Thousands of people protested the Serbian president's announcement that a lockdown will be reintroduced after the Balkan country reported its highest single-day death toll from the coronavirus Tuesday, Wednes, July 8, 2020.

Serbian President Aleksandar Vučić called on protesters on Wednesday to stop attending anti-government rallies to avoid further spread of the coronavirus, but backtracked on his plans to reinstate a coronavirus lockdown in Belgrade after thousands protested the move and violently clashed with the police in the capital.

Potesters overnight fought running battles with police and tried to storm the parliament building after Vučić announced on Tuesday that a weekend curfew will be reintroduced in the Balkan country after health officials reported the highest single-day death toll from COVID-19 cases.

Opponents blame the autocratic Serbian leader for contributing to the spike in deaths and new cases after he lifted the previous lockdown measures. They say he did that to cement his grip on power after parliamentary elections held on June 21. He has denied those claims.

On Wednesday, Vučić backtracked on his new lockdown plans that were to take effect during the coming weekend, claiming the measure cannot be implemented without proclaiming a nationwide state of emergency.

Vucic said that although he still supports the lockdown, "most probably, there will be no curfew."

He said that the government will decide on new measures that could include shortened hours for night clubs and penalties for those not wearing masks.

He said foreign secret services were behind the Tuesday night protests by "right-wing and pro fascist demonstrators." He did not identify the alleged spy agencies and strongly defended the police action against accusations of brutality.

"We will never allow the destabilization of Serbia from within and abroad," Vucic said, adding that the protest had "nothing to do with the coronavirus.''

Serbian police said 23 people were detained in the clashes that lasted for more than six hours. Police chief Vladimir Rebic told state-run RTS television that authorities are working to identify more people who took part in the rioting that left 43 police officers and 17 demonstrators injured.

Rebic said police showed "maximum restraint" and reacted only when it was absolutely necessary.

Some rights groups in Belgrade denounced what they described as police brutality. The Belgrade Center for Human Rights urged citizens to come forward and offered legal aid.

By Jovana Gec and Dusan Stojanovic/AP