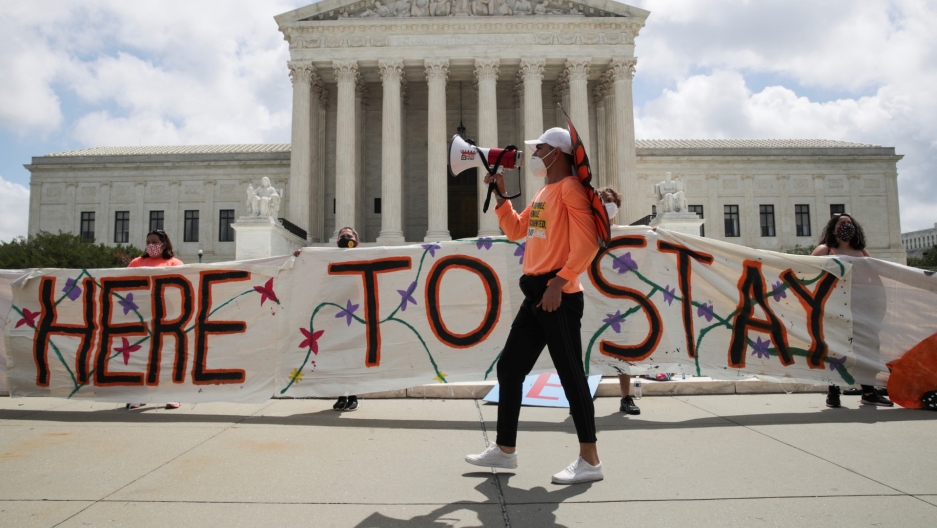 DACA recipient Luis Zuluaga, who immigrated to the United States from Colombia when he was 3 years old, celebrates outside the Supreme Court after it ruled in a 5-4 vote that President Donald Trump's 2017 move to rescind the Deferred Action for Childhood Arrivals (DACA) program was unlawful, in Washington, June 18, 2020.

In a major blow to the Trump administration, the US Supreme Court ruled that the Deferred Action for Childhood Arrivals program can continue.

The program was created by former President Barack Obama in 2012, and it prevents immigrants who came to the US as children, often without authorization, from being deported and gives them work permits. In 2017, the Trump administration rescinded DACA, arguing it was unlawful.

Thursday’s much-anticipated ruling ended a yearslong legal battle around how the Trump administration ended the program. It provides some relief to the approximately 650,000 DACA recipients in the country.

The president voiced his displeasure in a tweet, saying the ruling was “horrible and politically charged.”

These horrible & politically charged decisions coming out of the Supreme Court are shotgun blasts into the face of people that are proud to call themselves Republicans or Conservatives. We need more Justices or we will lose our 2nd. Amendment & everything else. Vote Trump 2020!

But supporters of the program are celebrating, including Juan Escalante, a digital campaign manager, with FWD.us, a bipartisan immigration policy group. Escalante is also a DACA recipient.

“I'm supremely elated and excited,” said Escalante. “The courts have sided with DACA recipients and with Dreamers and handed a defeat to the Trump administration by telling them that their acts and their actions to try to eliminate the program back in 2017 were in fact, illegal.”

The 5-4 decision called the Trump administration's move in 2017 "arbitrary and capricious."

Meanwhile, in a dissenting opinion, Justice Clarence Thomas wrote that the ruling makes way for political battles to be fought within the court rather than the executive and legislative branches.

Escalante spoke with The World’s Marco Werman about his reaction to the ruling and why there’s still a long road ahead in the fight for more permanent protections for DACA recipients.

Marco Werman: What does this ruling mean for DACA, is it a clear win? Does the program get reinstated? And will new immigrants be able to apply for the program?

Juan Escalante: The program has been reverted by Chief Justice Roberts, back to its original stance back in 2012. And it has told the administration that their acts to try to wind it down were in fact incorrect, and they violated the law in doing so. I have not forgotten that we still live under an administration that has acted against immigrants every step of the way. So, we'll need to examine very clearly what the White House instructs the Department of Homeland Security, USCIS and what the Trump administration will do next.

This decision, while it is a positive one, leaves the program in place. And while it does tell the president that he acted illegally, it still leaves the opportunity for the president to terminate the program on his own accord, were he to do it in a different manner than the way that he did it back in 2017. So, I think the message is clear. The court has ruled. The Trump administration took this to court for 2 1/2 long years and at the end of the road, they lost against all odds.

It is a win, but at 5-4, a narrow win. And an outcome that wasn't at all predictable. The court has favored several of the Trump administration's hard-line immigration policies and previous decisions. What were you expecting?

I'm a little bit older in the DACA spectrum of things. I'm 31 years old. A lot of the people who are beneficiaries of the program are much younger. But I've been essentially an immigration advocate for almost half of my life. I started doing this work since 16, and in order to do this work, you have to have essentially a sense of hope because, without it, you can't advance. And I say that not just because we live under an administration that uses its position of power to wield attacks against immigrants.

I say it namely because I have seen the so-called Dream Act pass and fail in Congress. I have seen, you know, mass deportations of people under Democratic and Republican administrations. And I have seen immigration reform packages come and go. And I think that for you to continue to essentially be behind this work and continue to move forward with it, you need to have a sense of hope.

It may sound kind of silly, but that's the way that I presented myself today. I told myself that I wasn't going to be scared, that I wasn't going to let this essentially slow me down in life and that, you know, whatever happened, you know, would happen. And guess what? The court realized that the best outcome was to make sure that they ruled with the law and with the facts.

Personally, for you, Juan, this is not the end of the road, but it's a big day it sounds like.

Absolutely. And I think overwhelmingly, for me, this reaffirms for people out there that we want to continue to put our best foot forward. What this means for a lot of people who are watching this is that, there is still hope and that this program, even though it continues to be a fragile exercise in discretionary action that allows us to be spared from deportation, work and drive without the fear of deportation in two-year increments, the program is still here.

And what the White House needs to understand is that they lost and that they need to back off from any attacks and then simultaneously speaking, it also means that for the allies and for the millions of people who continue to support us — the time is now, we need to seize this opportunity, call on our elected leaders in Congress and have them pass legislation that codify these protections into law.

At a 5-4 vote, do you think the message from the Supreme Court is strong enough that the Trump White House will stop those attacks?

I can't give you any sort of certainty on that. This has been one of the most unpredictable administrations that has done away with the quorum. A normal precedent will see this as a decisive defeat and will step away and realize that. Who knows what his advisers, primarily Stephen Miller, who is basically an immigration hawk, will say and do in the next coming days.

And while it is a moment of celebration and I'm definitely excited given everything that has happened, we continue to be very vigilant because if we know anything, it's that this White House does not give up.

What does today's ruling change about how you view the United States and how immigrants are seen within the country?

I think ultimately this is another step in the right direction. But at the same time, you know, it's just one step of many. We continue to witness unspeakable horrors at the national level. It wasn't too long ago there we were protesting children in cages. It wasn't too long ago that the Trump administration shut down asylum processes and it's trying to essentially undo the legal immigration system.

While this is welcome news, it's not essentially the end of the road. And they have to recognize that and I have to say that out loud. We have to keep pushing. The work doesn't end.