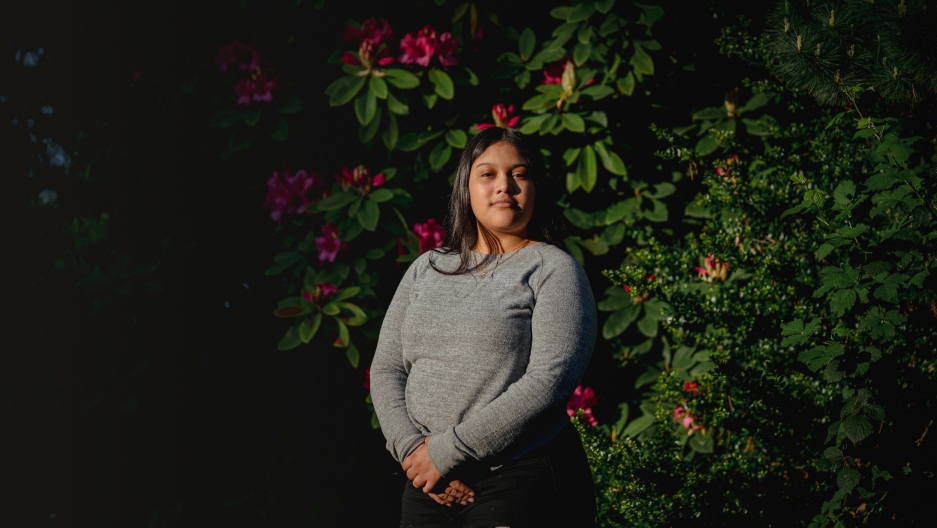 Michelle Aguilar Ramirez stands for a portrait on May 18, 2020, in Seattle.

For the last few months, Michelle Aguilar Ramirez’s life has been consumed by the stress of the coronavirus pandemic and classes on Zoom — and more recently, the Black Lives Matter protests in Seattle and around the country.

“Ever since the movement, ever since the death of George Floyd, it has been like a constant stir in my household,” she said.

Aguilar Ramirez is a first-generation Guatemalan American living in Seattle. She’ll turn 18 in September and plans to vote for the first time in the November presidential election. Like many people, Aguilar Ramirez is grappling with what she’s experiencing — not just the images of police brutality in the media, but how to implement meaningful change.

“I have a couple of friends who believe that the protests are useless because there's always going to be inequality and injustice in America,” she said. “I also have other friends who stand with me with the same belief that there needs to be a change made now, and we need to demand it in any sort of way.”

Before the Washington state primary in March, Aguilar Ramirez supported Vermont Sen. Bernie Sanders as the Democratic presidential nominee. When he dropped out of the race, she was lukewarm about former Vice President Joe Biden. And as the pandemic hit this spring, Aguilar Ramirez lost the bandwidth to stay connected to politics.

But the BLM protests have reignited her commitment.

“I'm going to vote for Joe Biden. There's a couple of things that are iffy here and there, but you know, I prefer him than something else,” she said, not naming US President Donald Trump.

So far, Aguilar Ramirez has been watching the national conversation on race and politics play out online from home. That’s because earlier this year, she tested positive for COVID-19. Some of her family members have recently started showing symptoms, too — so out of precaution, she hasn’t joined the protests in person.

On her Snapchat and Instagram, she’s seen a mix of virtue signaling, education and organizing, and overall support for the Black Lives Matter movement.

While most of her network seems tuned in to what’s happening, Aguilar Ramirez said, it’s frustrating to see some of her peers appropriate black culture but then not speak out when it comes to systemic issues like racism. For her, it’s not an option.

This passion ripples out into her home where she’s engaging with her mom and aunt in difficult conversations around racism in the Latino community and how to be an ally to the Black Lives Matter movement.

And it hasn’t been easy.

Aguilar Ramirez thinks part of the struggle is the divide in the kinds of media her family consumes. In her opinion, Spanish-language stations, such as Univision and Telemundo, aren’t telling the whole story.

She’s not the only one who's taken notice. A petition with over 11,000 signatures is calling on Univision to include a more historical context on racial divides in the US. It’s also calling on Latino media outlets to book more Afro Latino guests and host a town hall on police violence and social movements.

“Both of these platforms are showing only the bad parts of the protests, the looting, the riots, the protests that have gone wrong. And they are not presenting the bigger picture,” Aguilar Ramirez said.

She said she'll push through these difficult conversations and take a stance at the ballot box. The young voter recognizes that democratic change isn’t limited to the presidential election, but also includes races for county sheriffs, state attorney general, and other state and local offices.

“The whole movement, overall, has impacted me on how exactly my vote amplifies the voices of others,” she said. “I can't stay mute, just because I don't like certain candidates. I’d rather have something that fits most of the things that I believe in instead of having nothing and staying voiceless.”