At the George Floyd memorial in Madrid, Spain, this week, Shannon Evora Lopes Rodrigues, born in Madrid to parents from the West African nations of Guinea-Bissau and Cape Verde, recalled a soccer game in the Lavapiés neighborhood that ended in a police confrontation.

“They decided to stop us because we were a group of 10 guys and girls together. I don’t know what they thought we looked like, but we were just playing football. We were doing nothing out of the ordinary but they stopped us and asked us for ID. I got so angry at that moment and I didn’t want to hand [my papers] over because I did not understand why I had to,” she said.

“[White Spaniards] don’t care, because as long as immigrants carry on doing jobs that nobody here wants, they are going to keep thinking of us as slaves."

Evora Lopes Rodrigues, who “climbed and climbed” her way up to become a restaurant manager, said she wants white Spaniards to confront the racism that categorizes her and other people of color as servants — or worse. “They don’t care, because as long as immigrants carry on doing jobs that nobody here wants, they are going to keep thinking of us as slaves,” she said.

Related: In France, the killing of George Floyd invokes the memory of Adama Traoré

The death of George Floyd, a black man killed by asphyxiation under the knee of a white police officer in Minnesota in the United States, has resonated in Spain, where black people are seven times as likely to be stopped by police as white people. 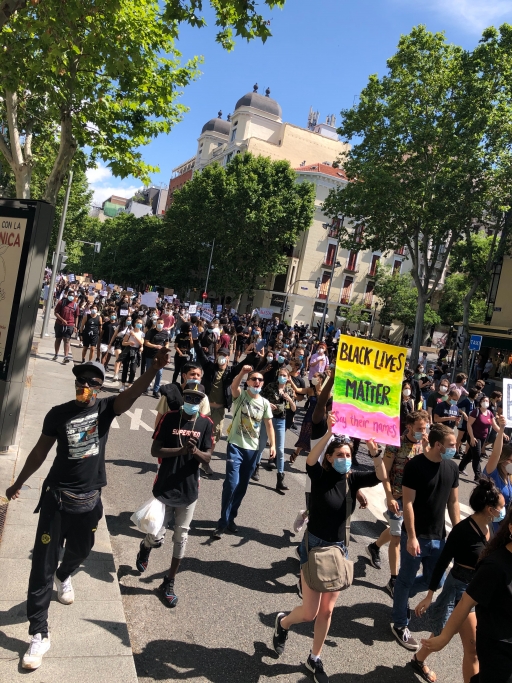 The organizers of Madrid’s George Floyd memorial originally planned a quiet remembrance ceremony for 200 people in front of the US Embassy. In the end, 3,000 showed up on June 7 to pay their respects and share stories of police harassment, racial discrimination and erasure from public life in Spain.

Spain is a multiracial country, with at least 1.2 million residents from Africa who are not Spanish citizens, and 1.3 million from Latin America, according to official statistics. But this country of 47 million people does not keep any breakdown of Spanish citizens according to race.

Non-white faces are a rarity on TV, in Congress, in cultural institutions, and Spain’s first black lawmaker was only elected in 2015.

“They don’t treat me like a regular person. As a black person here in Spain you are always being watched.”

It’s a description that Flava Mendy, a computer science student, recognized without hesitation. He told The World that walking alone at any time of day could mean a humiliating stop-and-frisk by the police. “They don’t treat me like a regular person. As a black person here in Spain you are always being watched,” he said.

He came to the memorial to ask to be treated the same as anyone else, he added. “We are speaking the same language, and looking at each other with the same eyes, and we bleed the same way, and all we ask for is respect and equality.”

While chants at the memorial began in English, with “No justice! No peace!” — echoing protests held across the United States — they later rang out in Spanish: “Ninguna persona es ilegal!” (“No person is illegal!”) and “Policía asesina!” (“Police kill”).

As the protesters pointed out, the Spanish police’s racial profiling, often of migrants, has cost lives. While Spain does not have the same record as the United States for police killings, many recalled the death in 2018 of Mame Mbaye, a Senegalese man who suffered a heart attack after being chased by police through the streets of Madrid. He had spent 14 years living in Spain without receiving citizenship documents. Africans are not eligible for citizenship without continuous legal residency, marriage to a Spaniard, or a work contract.

Mor Sylla, also Senegalese, jumped to his death from a balcony during a police raid in 2015, in the seaside resort of Salou, sparking protests and riots for days.

With a police force and state institutions that all too often view black people as foreigners or associated with crime, black Spanish citizens feel the precarity of their position in society.

Related: 'No justice, no peace': Thousands in London protest the death of Floyd

Moha Gerehou, a black journalist born in the provincial Spanish city of Huesca, has spent most of his career trying to educate the Spanish public about racism through his work as an activist and now as a writer for the digital news site ElDiario.es. Gerehou points to the troubles black people face in accessing the housing market, and racist insults at soccer games, as examples.

“When you go to view a house and they won’t rent it to you because you are black, in the end, it’s the same story whether you are in Minnesota or Madrid.”

“When you go to view a house and they won’t rent it to you because you are black, in the end, it’s the same story whether you are in Minnesota or Madrid,” he said. 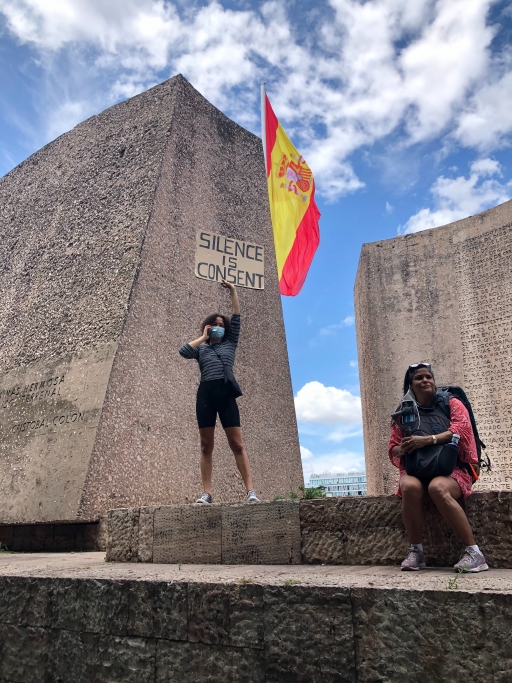 Two protesters attend the George Floyd memorial and one holds a sign that says "silence is consent," on June 7, 2020, Madrid, Spain.

Spain’s school curriculum erases black contributions to history, he added, while university students are overwhelmingly white. “You have to ask yourself what is happening when this racial diversity exists — we see it in schools and in the street — and it doesn’t reach universities. Universities are places that give access to jobs and other places with more visibility and power in society. There is structural racism behind that which places obstacles in the way,” Gerehou said.

While anti-racist slogans are part of left-wing politics in Spain, the current progressive government does not prioritize the dismantling of systems widely viewed as racist, he believes.

In the closed world of Spanish journalism, Gerehou can name every black colleague. “There are no more than 10 black journalists in Spain, and that’s a problem because it doesn’t reflect the reality of the streets, and above all, it doesn’t take into account a racial perspective when stories are made, beyond us as victims, always dying or suffering, or as the bad guys.

Beyond that, we don’t exist as experts in anything else, like the economy, or politics, or to talk about the coronavirus in Spain,” he said.