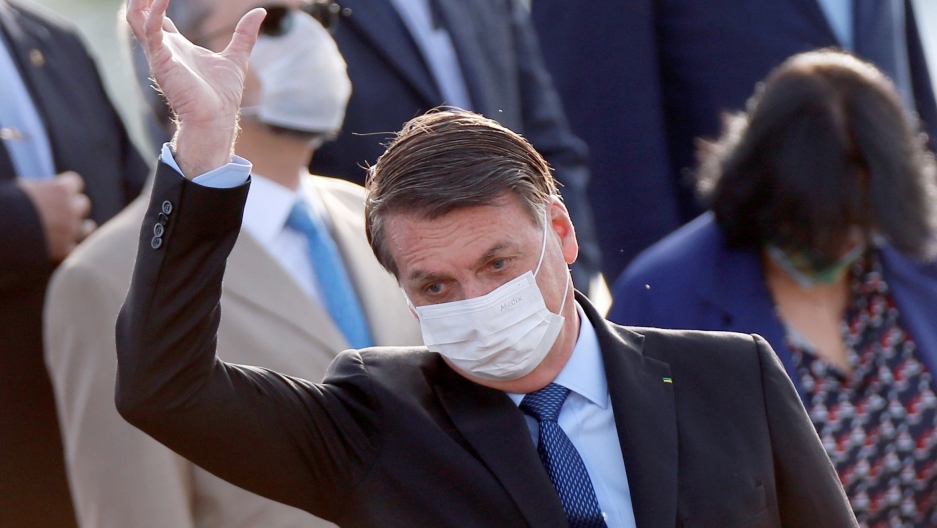 Editor's note: Later on Tuesday, the Health Ministry complied with a Supreme Court order and reinstated detailed COVID-19 data to the official government website. Lower House Speaker Rodrigo Maia said it would take several days for the public to recover confidence in the government figures.

Political scientist Luciana Santana went to check Brazil’s latest official government statistics on the spread of coronavirus last Friday, but the website was down.

When it came back up a day later, it showed only the number of dead and new cases over the previous 24 hours. Gone were the overall infection rates, number of deaths and the state-by-state breakdown. All of the data on the pandemic in Brazil had been wiped clean. The government of President Jair Bolsonaro says it’s not coming back.

“It’s worrisome because local health officials use information released by the Ministry of Health to make qualified decisions.”

“It’s worrisome because local health officials use information released by the Ministry of Health to make qualified decisions,” said Santana, a professor at the Federal University of Alagoas.

“They compare their realities with other municipalities and states to make decisions,” she said. “So this process has really messed with the fight against the pandemic across the country.”

This is only the latest of Brazil’s tumultuous fight against the coronavirus. The country has over 710,000 confirmed infections, the second-highest number of cases after the United States. Brazil recently overtook Italy as the country with the third-highest number of COVID-19 deaths in the world, with more than 37,000 deaths.

The real number of cases of the coronavirus could be seven times higher than the official count because of a lack of testing and underreporting, according to a Federal University study from May.

Nevertheless, several states are beginning to reopen their economies against the recommendation from health officials and the World Health Organization. A University of Washington study now predicts that Brazil could see 5,000 deaths per day by early August.

Bolsonaro tweeted that the change in the coronavirus data released by the Health Ministry was necessary, as the overall figures did not adequately reflect the current state of the virus. But his opponents blame him for trying to hide the country’s increasingly dismal reality amid the growing pandemic. And they hit the streets in response.

Inspired by the Black Lives Matter protests across the United States, thousands marched against Bolsonaro on Sunday in the largest demonstrations since the beginning of the pandemic. People rallied in 20 Brazilian cities, carrying signs demanding democracy, respect for health workers and black lives.

Thousands are marching in Brasilia, right now, against the gov of far-right President Jair Bolsonaro. They are demanding respect for democracy & #BlackLivesMatter.

The banners read: "Everyone for Democracy... Against Racism & Fascism." #Brazil #GeorgeFloyd https://t.co/Ps0mUMqPMn

Bolsonaro lashed out at them on Monday during a government event.

“They are always after us, with the most absurd accusations. Trying to hurt us, delegitimize us and belittle us in the eyes of public opinion,” Bolsonaro said.

The president has long downplayed the virus, calling it a “little cold,” joining pro-government rallies without a face mask, and demanding that social restrictions be lifted. He fought with and forced out two health ministers before settling on Army Gen. Eduardo Pazuello, who has no public health experience.

Under Pazuello, the Health Ministry approved the widespread use of unproven drugs chloroquine and hydroxychloroquine. Press conferences have largely disappeared.

Even before hiding Brazil’s official coronavirus statistics, the Health Ministry had begun releasing its daily figures hours late. This past Sunday, it reported widely contradicting numbers of mortalities and new infections, confusing the tallies of both. Health Minister Pazuello said on Tuesday that his ministry is not trying to hide information. However, Brazilian outlets are reporting that military officials in the Health Ministry are pressuring statisticians to keep the coronavirus death rate under 1,000 per day, regardless of the real number.

“There is a push to confuse the population. This is extremely irresponsible. All of these actions are directed at fueling Bolsonaro’s electoral base. And Bolsonaro has an interest in maintaining political conflicts.”

“There is a push to confuse the population. This is extremely irresponsible,” Santana said. “All of these actions are directed at fueling Bolsonaro’s electoral base. And Bolsonaro has an interest in maintaining political conflicts.”

This is not the first time that Bolsonaro and his government have had difficulties with facts and transparency. Last August, Bolsonaro fired the head of the government agency that tracks deforestation after he released figures revealing a huge increase in lost Amazon forest.

“This government already has a tendency to be less transparent. Because transparency opens the door for demanding accountability,” said Fabiano Angelico, a Brazilian expert on government transparency. “So press and civil society start to demand more and the government has to respond and be more accountable, which this government does not like to do.”

“So, press and civil society start to demand more and the government has to respond and be more accountable, which this government does not like to do.”

On Monday, six mainstream Brazilian news outlets reported that in the absence of the COVID-19 government figures, they would work together to compile and release joint statistics. State health secretaries also announced that they would be maintaining their own website, which they would update hourly.

“It’s an important effort,” said Mellanie Dutra, a neuroscientist who has been coordinating a national network of researchers studying the pandemic. “Only with transparency and the release of robust statistics — data that’s important to understanding the dynamics of the pandemic, and how it’s developing in different regions — can we determine strategies and initiatives to respond to it.”