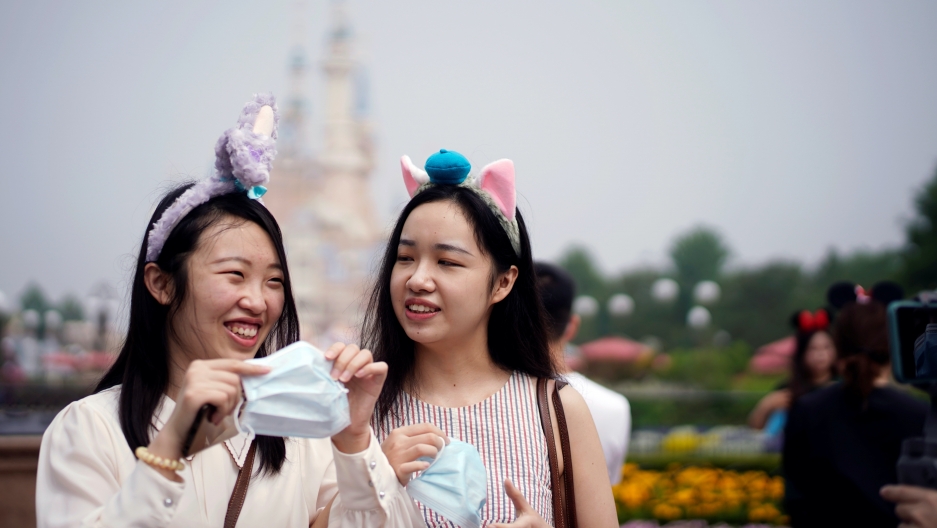 Visitors hold face masks at the Shanghai Disneyland theme park as it reopens following a shutdown due to the coronavirus disease (COVID-19) outbreak, at Shanghai Disney Resort in Shanghai, China May 11, 2020.

In China, millennials — defined as anyone born between 1981 and 1996 — have been known to be big spenders. But as the Chinese economy recovers from a coronavirus-induced slowdown, many young people are reexamining their lives and their spending habits.

Wang Aijing, 29, was living the single life in Shanghai, and making a good living working as a fashion journalist. ”I don't see it's necessary to save money. Because, for me, like marriage or buying a house — it's too far away from me,” she said.

Related: Governments work on recovery plans as societies open up

“Everything was just a mess for me. I realized that I really need to rethink about the whole financial status of myself. And then I realized how much I spend — not very reasonably.”

Then the coronavirus outbreak turned everything upside down. Her company downsized, she lost her job, and her plans for the future disappeared. “Everything was just a mess for me. I realized that I really need to rethink about the whole financial status of myself," she said. "And then I realized how much I spend — not very reasonably.”

She wasn’t alone. A study reported by a Shanghai paper showed that 45% of young people under 30 had experienced a drop in income during the COVID-19 outbreak, more than any other age group.

It was time for a new plan. Last month, she started to save money regularly in her bank account. And she’s changed her shopping habits too: no more buying clothes and makeup.

She and her friends started downloading new apps on their phones to sell off secondhand electronics and get group deals. “In the past, we probably would laugh at people who use that, too,” she said. “But now it seems like we discovered its beauty. It's really bringing cheaper stuff, and it’s okay quality.”

Another poll taken in April showed that more than half of Chinese shoppers under 30 plan to start managing their finances better.

James Roy, an American market analyst in Shanghai, has been paying close attention to young shoppers and people who buy luxuries. He says he’s noticed several shopping trends in post-COVID China. There are revenge shoppers, who did consolation shopping once quarantine ended. There are those who are embracing a simpler life, albeit one marked by fewer but higher quality products. And then there are the bargain hunters, like Aijing.

“Especially this younger group, they've been the ones that have been saving the least, you know, they're big credit card users and have been very avid shoppers,” he said. “I think, in a way, this is a time for some of them where that's kind of caught up to them.”

Monthly shopping promotions are offering great deals as the government tries to stimulate the economy. And travel restrictions have removed focused spending domestically.

“You’re not spending that money overseas like when you're traveling to Hong Kong or to Paris or to Tokyo or Seoul. So, all of that money that they would have been spending abroad is getting spent domestically.”

“You’re not spending that money overseas like when you're traveling to Hong Kong or to Paris or to Tokyo or Seoul,” Roy said. “So, all of that money that they would have been spending abroad is getting spent domestically.”

Despite these temptations, saving money has actually turned into a new lifestyle for Aijing and others.

She used to grab an expensive latté at an independent coffee shop. Now? She heads to Starbucks for early morning 50%-off deals. She used to meet her friends for brunch at the latest hotspot. Now they choose a restaurant where they can use coupons or points. Sometimes they’ll entertain at home — something they never did before.

She’s found a community of young people just like her in online budgeting groups.

“It’s interesting to see how they use money, how they save up, how they live the life they feel more meaningful.”

“It’s interesting to see how they use money, how they save up, how they live the life they feel more meaningful,” she said. “There are some people saving up money for trips, honeymoon, or their children’s education. There’s always a purpose. I like that. I like saving up money for something that makes your life better.”

The biggest change Aijing is making, though? In a few months, she’ll pack her bags and move back in with her parents in southern Guangxi province — more than 1,000 miles away from her life in Shanghai. She expects to find a job that will pay less than a quarter of the salary she made in Shanghai. But without the temptations of big city life and with no rent and few living expenses, she’ll finally be able to save big.

For many embracing a thrifty lifestyle, it isn’t exactly by choice. But Aijing is feeling positive about it.

“I feel like although I was paid — OK, I was paid good, but that is at the expense of my life. I just feel like pulling together all the resources that I have makes me feel like I'm smarter than before and it's a normal thing that everyone does and it is nothing shameful,” she said.

Now that saving has become a habit for her, she has new dreams of what she can achieve, including an apartment for herself and a summer holiday in Italy. The pandemic may have taken Aijing's job, but it’s also given her a new outlook on life.