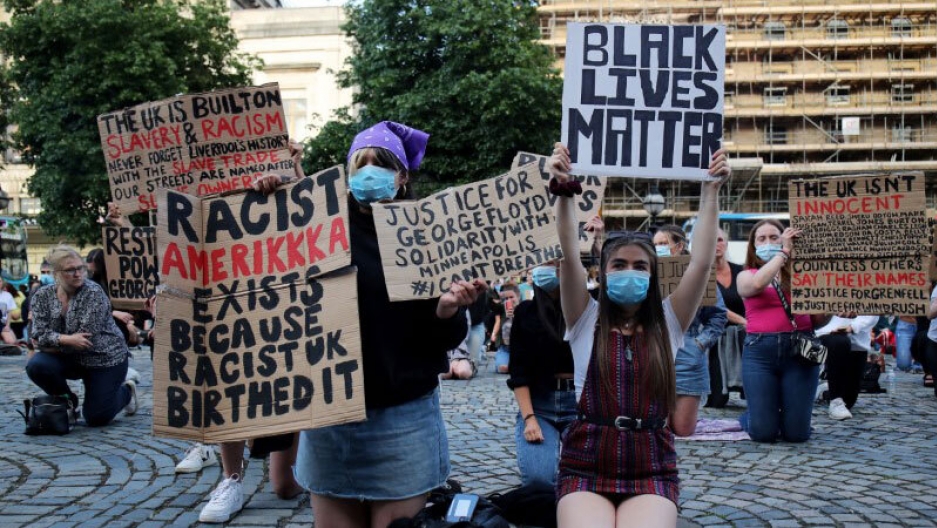 People wearing protective face masks hold up signs during a protest against the death of George Floyd, who was killed in police custody in Minneapolis, in Liverpool, Britain, June 2, 2020.

Since the killing of George Floyd nine days ago, much of the United States, and many parts of the world are boiling over.

People are grappling with existential questions about race, equity, equality and which answers can finally lead to some sort of systemic change.

"In the US specifically, I think the challenge here is that, especially for black people, there're multiple existential threats," said Tendayi Achiume, the United Nations special rapporteur on racism, racial discrimination, xenophobia and related intolerance. "There's the threat of the pandemic itself, which is killing black people in the US at a disproportionate rate, at least this is what the data is showing us. And then at the same time, there's the existential threat of police brutality and police violence."

Special rapporteurs are independent experts who advise and publicly report on a wide range of human rights issues, appointed by the United Nations Human Rights Council.

"We're seeing people willing to risk their lives and put themselves at greater risk of the pandemic because the choices are so few."

"We're seeing people willing to risk their lives and put themselves at greater risk of the pandemic because the choices are so few," Achiume continued. "You know, they may be able to survive the pandemic, but if structural racism means that walking out the door means you might be killed by the very actors who are supposed to protect you — I think what we're seeing is just how deeply existential these protests are and just how deeply existential the concerns are among the communities that are most impacted."

Achiume, who also teaches law at University of California, Los Angeles, spoke with The World's Marco Werman about the impact of George Floyd's death and protests against systemic racism around the world.

Marco Werman: People of color. Justice denied. Bare minimum health care. I mean, this is a theme around the globe. I'm sure you've noticed it in many places.

Tendayi Achiume: Absolutely. And I think this also speaks to some of the solidarity that we're seeing on a global scale. I have to say, it's been really heartening to see people all over the world take up the mantra that black lives matter. And I think here, when they do so, a lot of it is solidarity with the situation in the United States. But I think a lot of it is also recognition of anti-black racism and other forms of racism, as well, that prevail in other parts of the world. And so, I think it's a powerful show of solidarity. It allows transnational mobilization to take place so that people can share knowledge on how they dismantle structural racism. But I think it also means that in those other countries where there are protests, the leaders in those countries have to understand that there are calls for internal change there, as well. And this isn't only about pointing out the situation in the United States.

Related: 'No one is above the law,' St. Paul BLM organizer says

So we've seen people showing solidarity by going out in the streets. But we've also seen, at least in this country, that the national leadership has threatened further militarization. So, we don't know what will happen in the next few days, just in terms of immediate dynamics that may play themselves out. But there is some concern that the human rights situation might be made worse by an official response that cannot engage with the fundamental demands that are being made by protesters.

The United Nations, the European Union, the pope, some countries, including South Africa, put out statements condemning police brutality and the use of rubber bullets against protesters. I know you do not represent the UN as a special rapporteur. You advise the group. But what do you make of these statements?

I think these statements speak to the fact that there is a common standard that can apply around the world. There is a common baseline to which all governments must be held in the way that they treat their citizens. And so I think those expressions are truly powerful. But I think at the same time, those statements are simply not enough. We have to rethink fundamentally the role of police in society. And it's not just about police brutality. It's about the ways in which police have been tasked with providing interventions that really should be social service interventions rather than law enforcement interventions. And then even more deeply, you know, this is only marginally or partially about the police.

This is about fundamental racism and structural racism, which exists in all of the countries that are making statements that exist within the UN system, as well. So all of this is to say, I think this is a powerful statement, but it is just the beginning. And if this is where things end, then we're right back where we started.