Editor's note: On May 29, the UK government said that they were making changes so more children whose families have No Recourse to Public could access free school meals — by increasing the income threshold for families from 7,400 pounds ($9,138) to 16,190 pounds ($19,984). Many children, however, will still be left hungry.

Fi Carrick-Davies and her teenage son, Ethan, laden with bags of cereal and bagels, stand in the elevator of an apartment building in southeast London, suddenly unsure which button to push.

They’ve been doing a lot of deliveries today, and it can be hard to keep the addresses straight. But when the elevator door creaks open, they see a familiar face: Bola Fagbemi, her own door flung open.

“Miss Bola!” Carrick-Davies said. “I can’t come in, my darling! I’m not allowed.”

The two greet each other exuberantly, if from a pandemic-required distance. They have a long history, as they both say.

Carrick-Davies works at Surrey Square Primary School, where Fagbemi’s 10-year-old son, Abdul-Qayyum, is a student. Fagbemi’s two older daughters went there as well. In her role as the school’s family and community coordinator, Carrick-Davies has supported the family through a long immigration battle and tough times over the past years.

Today, Carrick-Davies is delivering food to Fagbemi’s family and others from the school whose immigration status prevents them from accessing most governmental support during the pandemic. Carrick-Davies doesn't want them to go hungry; especially as Fagbemi's kids haven't even been able to get subsidized school lunches in recent weeks.

Taking care of the entire family is at the heart of this school, which sits on the edge of the Aylesbury Estate, a vast network of highrises that used to be the largest public housing unit in Western Europe. Surrey Square acts as a sort of community center for the diverse population it serves. Their motto is “Personal and academic excellence, everyone, every day.”

Carrick-Davies says there is a reason that the personal comes first.

“We recognize that if there is anything going on in that home life that is challenging for a child, it's going to affect their academic progress and achievement anyway.”

“We recognize that if there is anything going on in that home life that is challenging for a child, it's going to affect their academic progress and achievement anyway,” Carrick-Davies said.

The staffers were particularly conscious of this in the days before the school shut its doors in March. They knew that many families would be struggling during this period and wanted to help how they could. 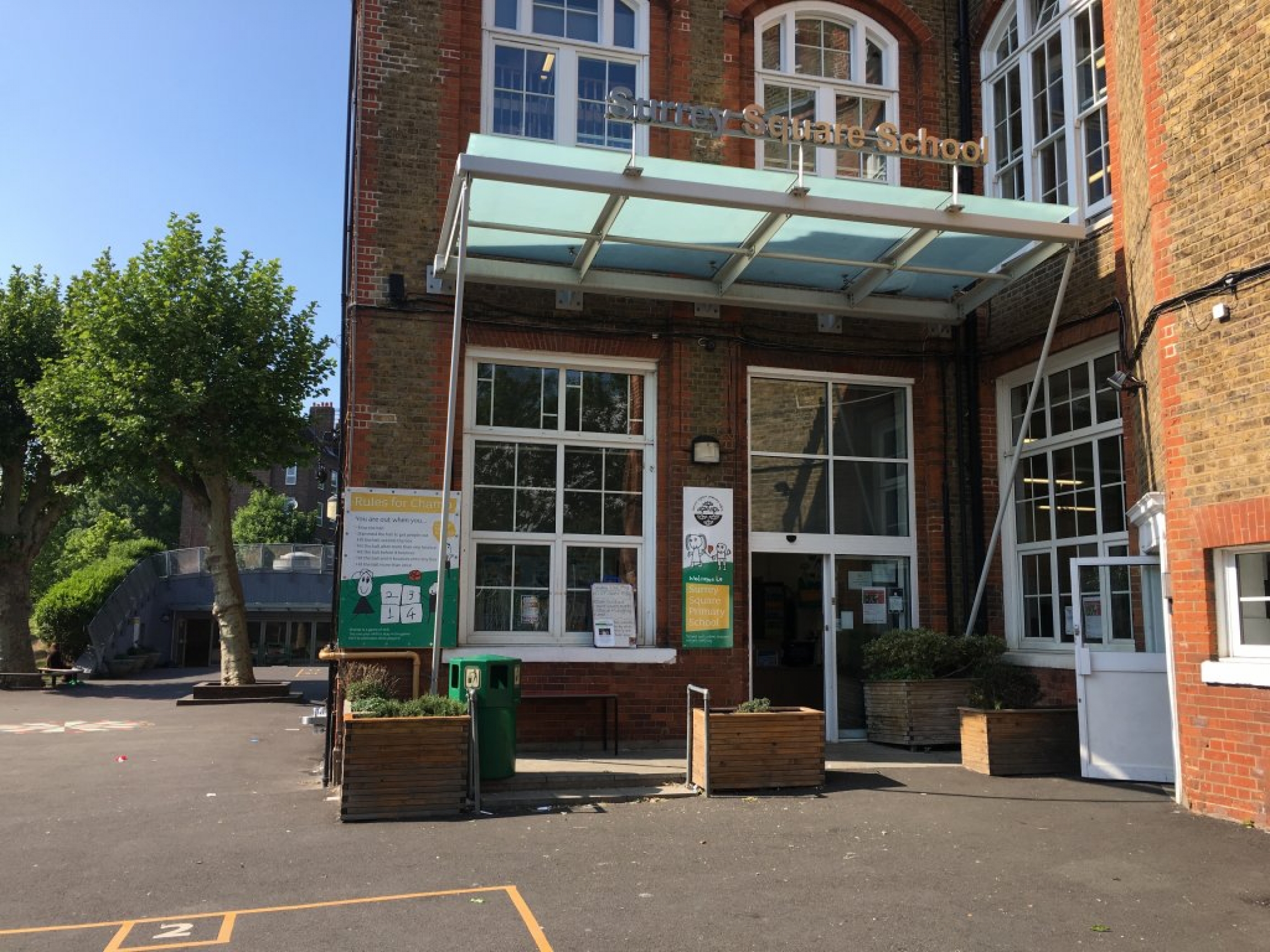 Staff at Surrey Square Primary School, located in southeast London, have been working to provide food for their most vulnerable students during the pandemic.

“We set up a really comprehensive list of every child or family in the school that we knew had some kind of vulnerability,” Carrick-Davies said.

The so-called vulnerability matrix, which accounts for a wide range of special needs, from hunger to social services, included 133 families — roughly half of the school.

Like Fagbemi, who is originally from Nigeria, a lot of the parents of Surrey Square students are immigrants and are blocked from accessing any kind of federal help. That restriction is called No Recourse to Public Funds, or NRPF.

The restriction has been around for a while, but officials started applying it in full force around 2012. That’s when the British Home Office, which is in charge of immigration, was busy instituting the hostile environment policy, a series of measures meant to make life as difficult as possible for undocumented immigrants.

The Home Office even drove around in vans with signs reading, “Go home or face arrest.” A lot of these punitive policies ended up affecting legal immigrants, as well.

More than a million adults, many of them legal residents, are thought to have the NRPF restriction on accessing benefits, as well as 142,000 children, according to a May 2020 report by the Children’s Society, a charity. And though a High Court ruled in a recent case that the policy was unlawful — and had pushed the claimant, an 8-year-old boy and his family, into extreme poverty — there is no sign of relief for these families anytime soon.

On May 27, East London Member of Parliament Stephen Timms asked Prime Minister Boris Johnson about a family he knows who are in a difficult situation because of their No Recourse to Public Funds status. Johnson seemed surprised to learn of the issue.

“I'm going to have to come back to you on that, Stephen. Clearly for people who've worked hard for this country, who live and work here, should have support of one kind or another.”

“I'm going to have to come back to you on that, Stephen,” Johnson said. “Clearly for people who've worked hard for this country, who live and work here, should have support of one kind or another.”

When the British Department of Education started handing out grocery store gift cards to vulnerable families during the pandemic, Fagbemi’s kids were left out. Even though they’re UK citizens, the benefits ban applies to them, too — including for the free lunches. Even amid a pandemic.

Related: Human touch is essential. How are people coping with ‘skin hunger’?

Surrey Square co-headteacher Matt Morden set up a fundraising page to provide grocery store vouchers to NRPF families. School staff also connected them with a food bank. They gathered groceries at the school for families to pick up and arranged to make some deliveries themselves.

Then, in mid-April, British officials said they had decided to extend the free lunch voucher program to more kids, including those who had previously been banned.

“Oh, my goodness. I mean, we couldn't believe that this group of vulnerable children were being recognized and acknowledged, and deemed valuable enough to support because our experience in the past is that they are treated like they don't matter,” Carrick-Davies said.

But when she and her colleagues looked closer at the guidelines, they realized only families who make less than 7,400 pounds a year qualify. That’s less than $750 per month for an entire family. Carrick-Davies says for families with no access to federal social services, it would be almost impossible to survive on that little, especially in London, where rent is sky-high.

“Our parents who have No Recourse to Public Funds work really, really hard. They sometimes do two, three jobs, most of them earning more than 7,400 pounds a year. So, they weren't eligible.”

“Our parents who have No Recourse to Public Funds work really, really hard,” Carrick-Davies said. “They sometimes do two, three jobs, most of them earning more than 7,400 pounds a year. So, they weren't eligible.”

In the end, only one family at the school could get free school meals under the extension. It wasn’t Fagbemi’s family.

‘We are the lucky ones’

The Fagbemi-Akintoyese family is just scraping by. A few months ago, they say they emptied their savings to pay around 7,000 pounds to renew their residency in the UK. Since the pandemic, Fagbemi has had to close her child care business. 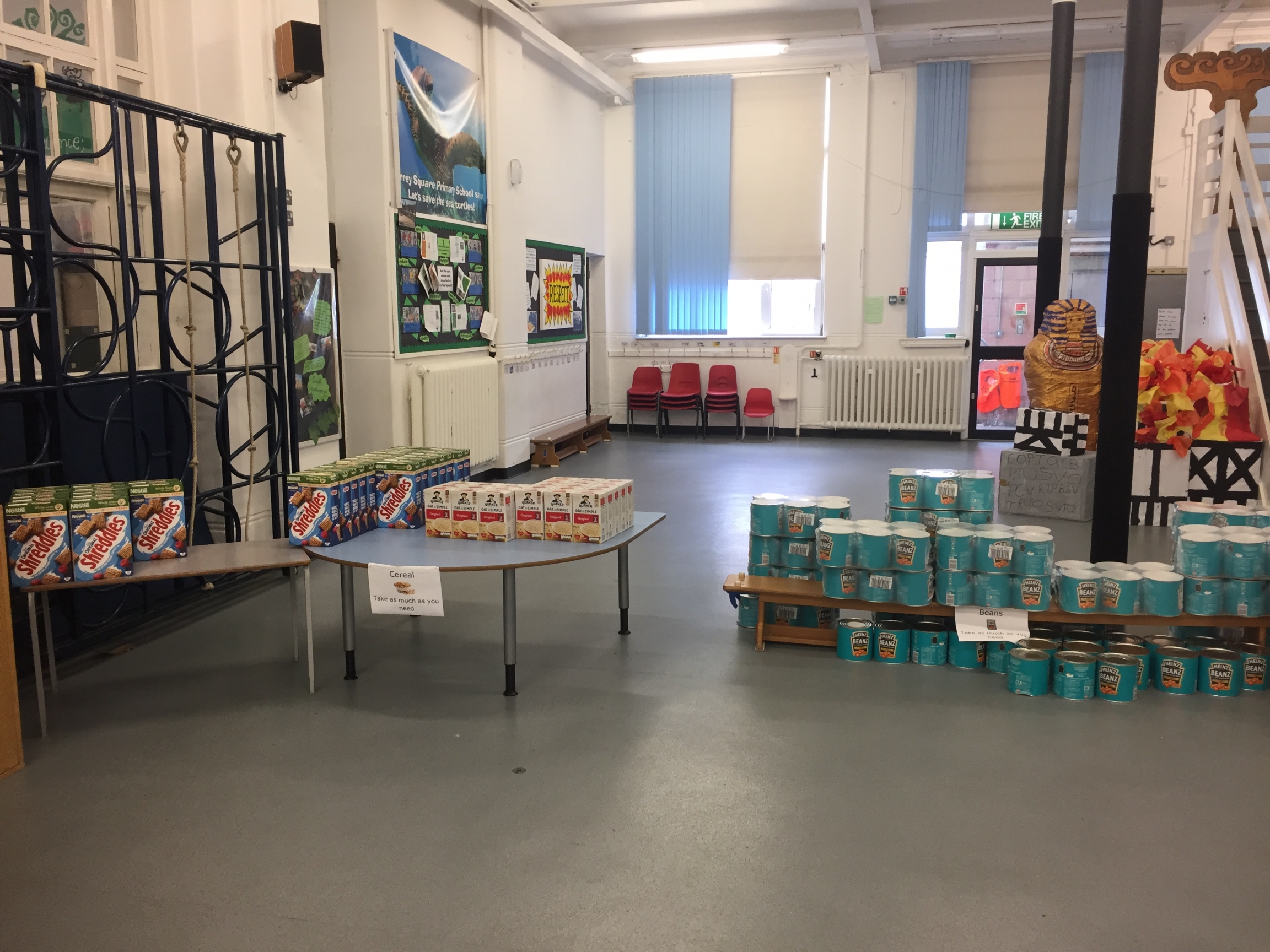 School staff have set out food for families to come pick up when they need it — from a safe distance. They also make deliveries to some of the more vulnerable families.

Now, their only income is her husband's job at King's College Hospital. Fatai Akintoyese is a phlebotomist, and he takes blood from COVID-19 patients. Thirteen-year-old Fathia says she worries about her dad.

“I feel very petrified,” Fathia said. “But his job is important. He says if he got coronavirus, people would be helping him, so he says he should help people as well.”

“I feel very petrified,” Fathia said. “But his job is important. He says if he got coronavirus, people would be helping him, so he says he should help people as well.”

She says she prays for his safety every night.

“We always thank God for what he has given us,” she said.

That includes the food and help from Surrey Square School. Fathia's mom, Fagbemi, says they are depending on it. She still remembers when Carrick-Davies first told her.

“I was crying that day because … it’s a good thing, you understand?” Fagbemi said. “It's like somebody just surprised you.”

Her kids like most of what is delivered, but not everything.

“I'm not a fan of potatoes, but I'll try and learn to adapt a bit because I need to appreciate what they’ve given us,” Fathia said.

Their favorite, however, are the grocery store vouchers.

“If my parents are going out shopping, we normally write a long list for them to get us what we like,” Fathia said.

During Ramadan, when the family gathered to pray together and break the fast each evening, Fagbemi said they took a moment to be thankful for what they do have.

“We count ourselves as among the lucky ones,” Fagbemi said.

They know many families aren’t getting any help at all.