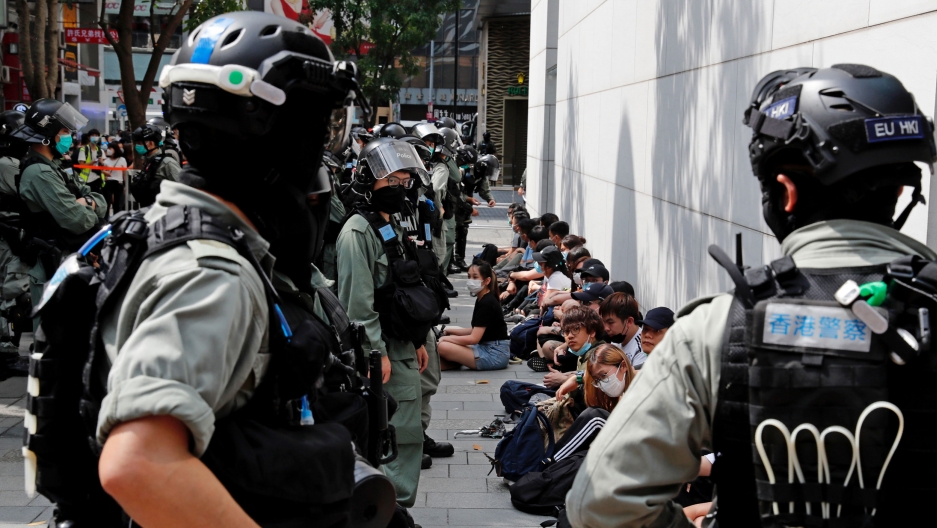 Anti-government demonstrators sit as they were detained during a protest as a second reading of a controversial national anthem law takes place in Hong Kong, China, May 27, 2020.

Hong Kong is warning that withdrawal of the financial hub's special status under US law could backfire on the US economy.

President Donald Trump is due to announce his response to the Chinese parliament's advancement this week of security legislation for Hong Kong, which many lawyers, diplomats and investors fear could erode the city's freedoms.

The former British colony has been racked by civil unrest amid fears Beijing is curbing the high degree of autonomy it has enjoyed under a "one country, two systems" formula adopted when it returned to Chinese rule in 1997.

"Any sanctions are a double-edged sword that will not only harm the interests of Hong Kong but also significantly those of the US," Hong Kong's pro-Beijing government said late on Thursday.

Beijing says the new legislation, likely to come into force before September, will tackle secession, subversion, terrorism and foreign interference in the city. It could also see Chinese intelligence agencies set up bases in Hong Kong.

In the latest assertion of Beijing's authority over the territory, China's Ministry of Public Security (MPS) said it would "direct and support Hong Kong police to stop violence and restore order."

The city's police have been independent from China and the MPS has no enforcement powers in the city.

As anti-government tensions flared this week, riot police fired pepper pellets to disperse thousands of protesters in the city's first major unrest since demonstrations paralysed it for months last year. There had been a lull, partly as a result of the coronavirus outbreak this year.

Chinese authorities and Hong Kong's government say the legislation poses no threat to the city's autonomy and the interests of foreign investors will be preserved.

Reacting to US efforts to call a UN Security Council meeting over Hong Kong, China's foreign ministry reiterated that Hong Kong was an internal affair and no country had the right to interfere.

It said China had lodged solemn representations to countries condemning its plans and was determined to take countermeasures against any US actions.

Underscoring the risk for foreign businesses of becoming caught in the political crossfire, former Hong Kong leader Leung Chun-ying criticized banking group HSBC for not making its "stance" clear on China's imposition of the new law.

In Washington, Trump's top economic adviser, Larry Kudlow, said Hong Kong, which has enjoyed special privileges under US law on the basis of its high degree of autonomy, may now need to be treated like China on trade and other financial matters.

The State Department said it could "no longer certify that Hong Kong continues to warrant (differential) treatment" from Beijing.

Fitch ratings agency said it expected Hong Kong's economy to contract by 5% this year, largely because of the coronavirus, and the outlook for the operating environment for its banks was negative.

Hong Kong's Hang Seng index, which has lost about 3% after the news of the security legislation, was down 0.7%.

Many Hong Kong residents feel their city is on the cusp of historic change.

"No matter how it turns out, I’ll always stand on the people’s side," said Samantha Tam, 27. The office worker said the uncertainty had made her put on hold plans to have a baby.

The office of the UN High Commissioner for Human Rights said it feared the situation was becoming increasingly tense and polarized, and urged authorities to let peaceful protesters  exercise their right to freedom of expression and to assemble safely.

In a statement published in newspapers, Hong Kong's Beijing-backed leader, Carrie Lam, urged citizens to "join hands to pursue our dreams while putting aside our differences."

The legislation was needed because of a "terrorist threat," she said, adding that organizations advocating "independence and self-determination" had challenged the authority of mainland and local governments and pleaded for foreign interference.

The five demands of last-year's pro-democracy protest movement included universal suffrage and an independent inquiry into police handling of the protests, but not independence. A minority of protesters waved "Hong Kong independence" flags.

Independence is anathema for Beijing.

Protesters see the security legislation, along with a bill to criminalize disrespect for China's national anthem, as Beijing's latest attempt to tighten its control of the city.

By Sarah Wu and Marius Zaharia/Reuters