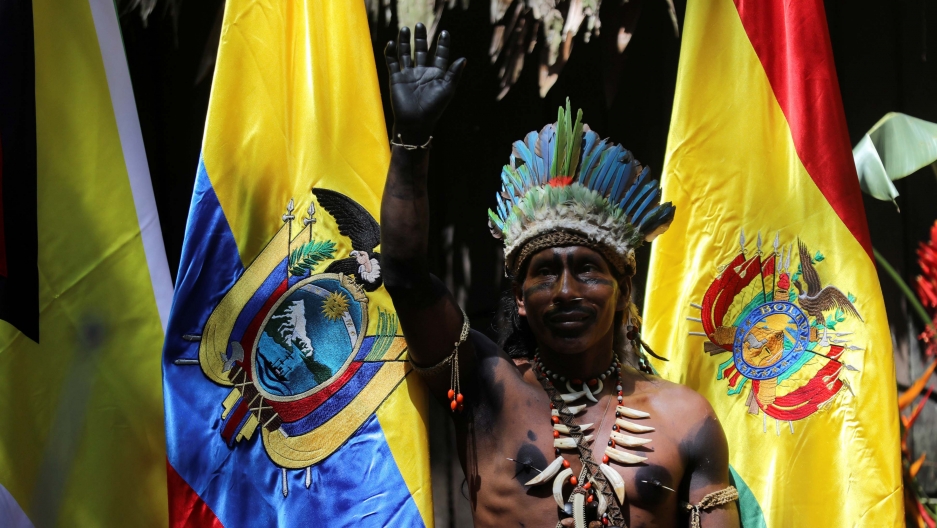 An Indigenous person gestures during the Presidential Summit for the Amazon, in Leticia, Colombia, Sept. 6, 2019.

Along the Amazon River, people have long moved freely among the small towns that sit where the borders of Brazil, Colombia and Peru converge — walking and driving between countries, or rafting from one shore to another.

Earlier this month, the Colombian government ordered the free flow to stop. President Iván Duque announced in mid-May he will send uniformed soldiers to guard the border between the two countries to prevent the coronavirus from spreading from neighboring Brazil, which quickly emerged as a global epicenter of the pandemic.

Related: Bolsonaro’s ‘so what’ response to coronavirus deaths is latest in his spiraling political crisis

But Duque’s efforts came too late. The coronavirus has spread across Colombia’s Amazon rainforest, threatening the Indigenous communities that make up a majority of the region’s population. More than 1,500 people there were reported to be infected by Tuesday, according to Sinergias, an independent public health organization.

“The situation is very serious because there’s a lack of medical personnel and infrastructure.”

“The situation is very serious because there’s a lack of medical personnel and infrastructure,” said Julio César López Jamioy, president of the Organization of Indigenous Peoples of the Colombian Amazon.

The town of Leticia, the capital of Colombia’s Amazon region, has just two small hospitals that were quickly overwhelmed with patients. López Jamioy said he believes the virus has spread to communities in the rainforest. An estimated 1 million people comprising some 400 communities live in the Amazon rainforest.

And if the coronavirus spreads, it has the potential to wipe out entire ethnic groups. Indigenous communities have been devastated by infectious diseases as recently as the 1990s, when measles, meningitis and the cold killed almost half the members of the Nukak community in the northern Amazon.

“Disease has almost wiped out all Indigenous communities and almost erased all indigenous knowledge.”

“Disease has almost wiped out all Indigenous communities and almost erased all Indigenous knowledge,” said William Yucuna, who practices traditional medicine and is from the Yucuna community.

The second-biggest threat after the loss of life is the loss of knowledge, Yucuna said. The coronavirus represents a threat especially to elders, who are stewards of oral knowledge about the rainforest and about community history.

“We don’t have our wisdom, our knowledge, our science in writing the way you do,” Yucuna said. “Every grandfather, every knower is a steward of that oral knowledge.”

Related: Photos: Colombia’s Indigenous Guard, defenders of the land and their own lives

That’s why entire communities in the rainforest have gone into isolation, said Antonio Loboguerrero, director of Fundación Etnollano, a nongovernmental organization working alongside Indigenous peoples. They are not allowing anyone in or out.

Some communities are using traditional medicine to strengthen their people’s immune systems. And Loboguerrero has spoken with at least one leader who’s been designated as the only person to leave the community to travel once a month to the nearest town, he said.

Communities in the rainforest have become dependent on commerce with others and buy provisions such as coffee, fishing hooks and batteries for flashlights, Loboguerrero said. They also want to know how the pandemic is evolving.