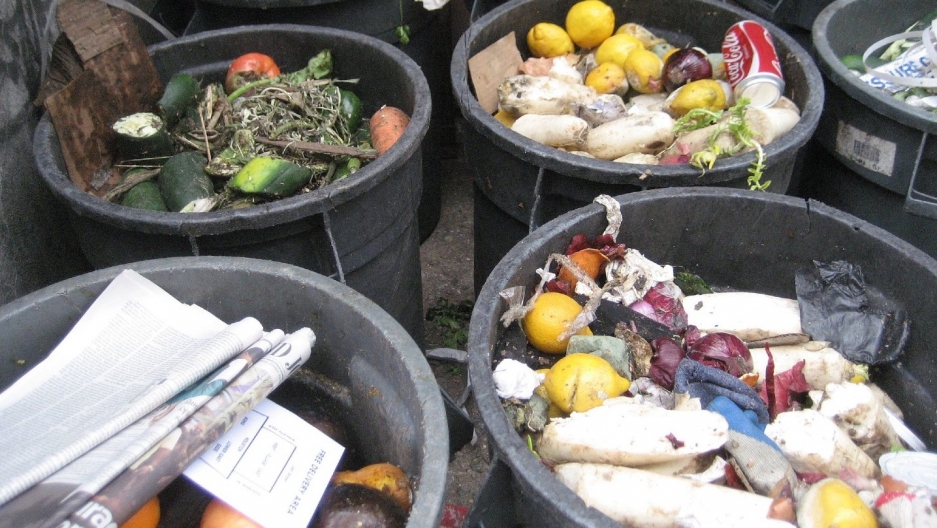 Food waste is the number one item in US landfills, and it doesn't come from farmers — it comes from household trash bins.

Long before COVID-19 disruptions forced dairy farmers to dump millions of gallons of milk into fields and farmers to plow under fields of vegetables, a third of all food produced globally was going to waste, with huge consequences for world hunger and the climate.

In less affluent countries, a lot of food becomes spoiled on the way to market, but in the US and other rich economies, most wasted food is thrown out at home because it has rotted in the fridge or on the counter.

And the numbers are huge.

On a yearly basis, food waste accounts for more than three gigatons of carbon dioxide emissions. Roughly 1.3 billion tons of food, worth nearly $1 trillion, spoils or is thrown away. With the closure of many restaurants and schools amid the pandemic, interruptions in food supply chains have led to even more food waste.

According to John Mandyck, chief executive officer of the Urban Green Council and co-author of the book “Food Foolish: The Hidden Connection Between Food Waste, Hunger, and Climate Change,” when we complain about food waste, particularly in the wealthy world, “we’re actually pointing the finger in the wrong place.”

"The number one place we waste food in the United States is at the household level. We did that before the pandemic, we’re doing that during the pandemic and we will do that after the pandemic."

Food is the number one item in US landfills, Mandyck points out, and it doesn’t come from farmers. It comes “from our waste bins.”

The pandemic has also revealed what Mandyck calls the “short-term balance” in the food supply chain, and because this balance has been thrown off, consumers are dealing with shortages in ways they haven’t had to before.

“For a long time,” Mandyck said, “we’ve thought that grocery stores were these magical places where we buy yogurt, we don't use it, we throw it away, we go back to the grocery store, and guess what? — the yogurt is back on the shelf — like it magically appeared.”

Now, people are starting to ask, "Why isn’t the yogurt there?" The answer, Mandyck says, is that there’s a long distribution chain to get the yogurt to the shelf and if one part of that chain gets disrupted, shortages can occur and food goes to waste.

"We have to have consumer education and awareness to understand the scale and consequences of what happens when we throw away food."

Consumer food waste is “a rich country dilemma,” Mandyck said. “Food is relatively inexpensive in the United States. If we throw away the 99-cent yogurt because we were confused about the date label, we simply go back and get another 99-cent yogurt. We have to have consumer education and awareness to understand the scale and consequences of what happens when we throw away that food. We have to have public policies that encourage us not to do that and that means encouraging date labels that are rational and make sense.”

Europe has created some successful campaigns over the last decade to encourage consumers to waste less food. In the United Kingdom, for example, a consumer campaign called Love Food, Hate Waste reduced household waste by 20%.

Viewed on an international level, however, two-thirds of the global food supply is lost at the production and distribution level, Mandyck points out. This is an emerging economy problem.

“Food rots in poor transportation networks, it rots in open-air markets, it rots in wet markets in China, which is relevant to the pandemic that we're having today,” Mandyck said. “So, we have to find ways to modernize that production and distribution system in emerging economies if we really want to tackle the issue on a global level.”

"If food waste were measured as a country, it would be the world's third largest emitter of greenhouse gases, behind the US and China."

Mandyck calls food waste “one of the sleeping giants of climate change.” Food waste accounts for about 8% of global greenhouse gas emissions. If food waste were measured as a country, it would be the world's third-largest emitter of greenhouse gases, behind the US and China.

"We need consumers to understand that — particularly in the United States — to help change consumer behavior,” Mandyck says. “When we throw an item in the landfill, we just threw a ton of carbon in the landfill.”

Mandyck likes to use the example of a strawberry.

“It got to your grocery store, it sat on the shelf: The store is burning carbon waiting for you to come,” Mandyck continued. “Maybe you got in your car and burned carbon to go get the strawberry. You brought it back, you put it in your refrigerator, which is plugged in, burning carbon, and then you forgot to eat it and it went bad and it got moldy and you threw it away.