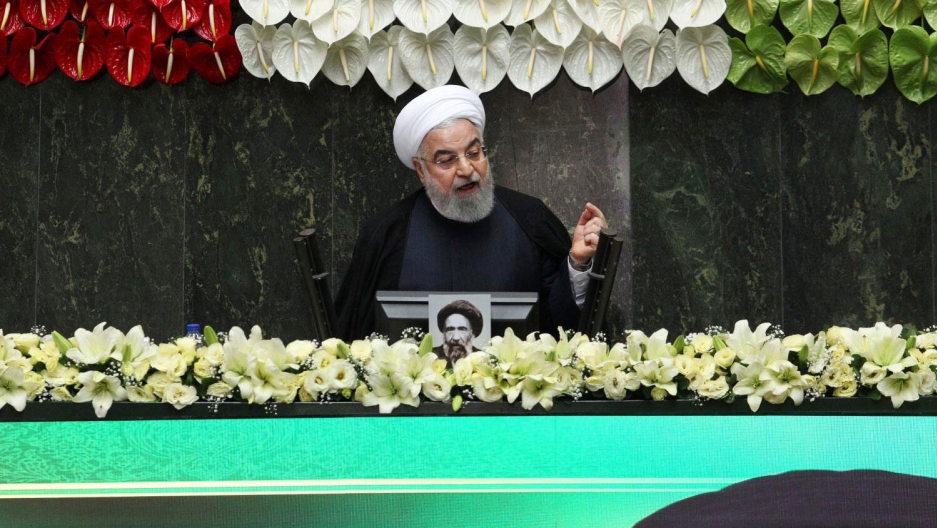 Iran is holding many foreigners in detention, and the government there is sending mixed signals about what comes next for those detainees.

There's been some talk of a mass release as Iran faces challenges responding to the coronavirus outbreak as it also deals with US sanctions. But at the same time, Iran's courts have been handing down convictions and long sentences.

Governments around the world, along with the United Nations, seem to be trying to leverage the pandemic to broker the release of foreign prisoners.

It's not known exactly how many Westerners are detained in Iran. Many families prefer not to publicize their cases, but it's probably a few dozen. Among them is 66-year-old Anoosheh Ashoori, a British Iranian retired engineer. He's has served three years of a 10-year sentence on spying charges.

Marco Werman: How is your husband doing physically and mentally?

Sherry Izadi: Physically, he has adapted. I mean, initially, he wasn't doing very well during the first year, when he was in solitary confinement for a long time and he was under interrogation for up to 10 or 12 hours a day for several months. He went on a hunger strike, and he had a couple of suicide attempts. But, I mean, fortunately, he's put all that behind. And I think he's now focused on keeping mentally and physically fit enough to survive this and to come out.

Where does your husband's case stand currently?

Oh, he's been convicted, and his appeal was rejected. So, at the moment, his sentence is firmly in place.

And other than an agreement being reached between the British government and the Iranian government over the state of these detainees, we don't have any legal recourses left to us, really.

We're hearing possibly encouraging news that Iran is perhaps looking for ways to release these prisoners. You follow the signals regarding possible releases and exchanges — what are you hearing?

Well, I mean, with the outbreak of COVID-19 in Iran, there was a lot of hope that because of Iran's need for foreign aid and that request it actually made to the IMF for a $5 billion loan, we thought that this would be a very good window of opportunity for European states, for the UK or for America to actually come to some sort of a deal with Iran to get these prisoners out. But it seems — honestly, it seems to have been wasted completely. I mean, initially, we were very positive. But as time goes by, we haven't seen any benefits to us or any practical outcomes. So, at this moment, I'm not particularly optimistic.

Is it possible Iran is looking for a deal?

It's quite possible. I mean, Iran has sent many open signals to the West that it is ready to exchange these prisoners. Foreign Minister Mohammad Javad Zarif, he has made repeated overtures to the United States that Iran is ready to exchange American prisoners with Iranian prisoners. I mean, he's mentioned it openly on the media. But with European governments, it's slightly different. Particularly, the British government.

We believe that Iran is looking for the payment of a very old debt that the UK government has to Iran, which I think is about 450 million pounds.

Yes. We think this is what Iran is seeking at the moment. Iran has proven time and again that they always want something in return for these detainees.

Related: 'I am lucky I survived': Voices from Iran, one of the worst-hit COVID-19 countries

So, when might your husband, Anoosheh Ashoori, be released if there is no deal?

Honestly, I mean, his sentence is 10 years if no deal is reached. We're looking at him spending another seven years in there. But honestly, that prospect is so terrifying that none of us, none of our family has ever actually thought about it. I mean, if every day I think that he's going to spend another seven years in there and come out a 73-year-old man, I think it'll be enough for everyone to have a nervous breakdown.

And Sherry, how are you faring through all of this?

We try to — as a family, we try to keep strong for my husband's sake.

I mean, we do. I think he's got enough, you know, emotional distress there that we don't want to add to it by appearing that we're suffering or anything. So, we always try to put on a brave front for him. But obviously, it's you know, it's taken its toll on our family. It's not easy. It's not easy to see your family member imprisoned for no reason whatsoever. He's a very kind, decent man. And when you see someone like that suffer for something that he's, you know, he's completely innocent of, it's very — it erodes you away. You know, it's extremely hard.