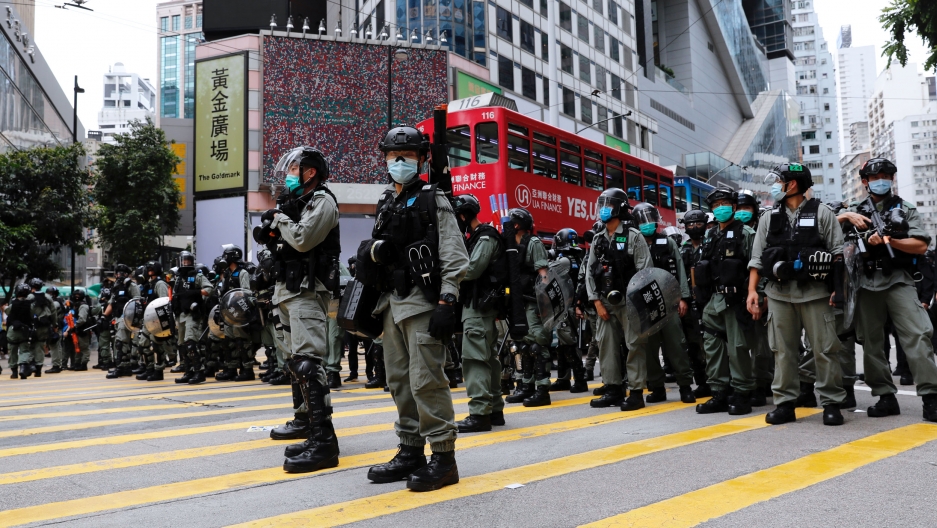 Riot police stand guard during a march against Beijing's plans to impose national security legislation in Hong Kong, May 24, 2020.

After activists circulated calls online for fresh demonstrations, Hong Kong police issued a warning late on Tuesday that they would not tolerate disruptions to public order/

Thousands of protesters clashed with police on Sunday in the first big demonstrations since a wave of violent protests last year. Financial markets have been alarmed by the prospect of a dramatic assertion of Chinese control over the city.

Calls were circulated on Tuesday on online forums for a general strike and protests on Wednesday against a national anthem law due for a second reading in the city's Legislative Council. Such calls do not always result in protests. Police said gatherings must not disrupt traffic and warned of jail terms for those who cause illegal disturbances.

The anthem law would require schools to teach China's national anthem, organizations to play it and sing it, and anyone who disrespects it to face jail or fines.

Protesters see it as a symbol of China's encroachment on Hong Kong's way of life, as manifest in the security law floated last week, which could pave the way for mainland security agencies to open up branches in Hong Kong.

'No need to worry'

Hong Kong authorities insist there is no threat to the city's autonomy.

"There is no need for us to worry," the city's Chief Executive Carrie Lam told a weekly news conference. "In the last 23 years, whenever people worried about Hong Kong's freedom of speech and freedom of expression and protest, time and again, Hong Kong has proven that we uphold and preserve those values."

The United States has branded the security law a "death knell" for the city's autonomy. Britain, which ruled Hong Kong until returning it to China in 1997, said it was deeply concerned by a law it said would undermine the "one country, two systems" principle under which Hong Kong is governed.

Hong Kong's Bar Association said the draft had "worrying and problematic features." According to the draft proposal last week, the legislation aims to tackle secession, subversion and terrorist activities.

On Sunday, police fired tear gas and water cannons to disperse thousands of people who thronged the streets to protest against the proposed legislation. Almost 200 were arrested.

It was the first major protest since pro-democracy demonstrations rocked Hong Kong last year over an unsuccessful plan to introduce an extradition law with China, Hong Kong's worst crisis since its return to Chinese rule.

More demonstrations are expected in coming weeks as residents grow more confident about gathering with the coronavirus outbreak under control.

Investors' concerns were clear in a sell-off on the Hong Kong bourse on Friday, though stocks regained some ground this week.

"Medium-to-long term it will still depend on US-China relations and the political situation in Hong Kong," said Steven Leung, executive director for institutional sales at brokerage UOB Kay Hian.

Beijing and city officials have toughened their rhetoric recently, describing some of the acts in last year's protests as terrorism and attempts at secessionism.

While authorities scrapped the extradition bill that sparked that unrest, they dug in their heels against calls for universal suffrage, amnesty for arrested protesters, an independent inquiry into against police handling of the demonstrations and a request not to label the protests riots.

Opinion polls show only a minority of Hong Kong people support independence, which is anathema to Beijing.

By Clare Jim and Noah Sin/Reuters