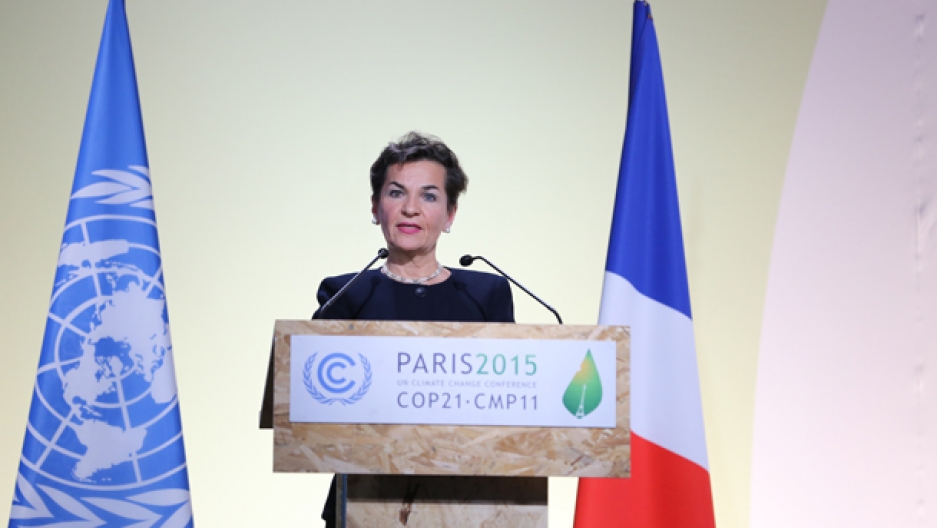 The UN secretary-general appointed Christiana Figueres as executive secretary of the United Nations Framework Convention on Climate Change in July 2010. Figueres grew up in Costa Rica, and is the daughter of Jose Figueres Ferrer, who served three times as president of Costa Rica.

The coronavirus pandemic has made it clear that the world is increasingly interconnected. Amid the tragedy of the virus, a top climate diplomat says there is an opportunity to rebuild our economies in ways that are both more equitable and sustainable.

Christiana Figueres was the executive secretary of the United Nations Framework Convention on Climate Change when the world came together in 2015 to hash out the historic Paris climate agreement. She is a founding partner of the organization Global Optimism and recently wrote a book titled, “The Future We Choose: Surviving the Climate Crisis.”

Figueres’ book came out at an interesting time, just as the coronavirus pandemic jolted the world. She sees a strong correspondence between the pandemic and climate disruption.

“The relationship between climate and health is a direct relationship,” Figueres says. “First, many of the vector-borne diseases that are borne by mosquitoes, such as malaria, dengue and chikungunya, are currently restricted to the equatorial belt because those are the temperature and humidity conditions that the mosquitoes need. But as temperatures increase, those temperature and precipitation conditions will actually expand beyond the equatorial belt much higher up in the north and [further down] in the south. Hence, we will have malaria, dengue and chikungunya in areas that have never known that disease.”

Second, Figueres adds, is the melting permafrost in Siberia that has been frozen for thousands of years and could very well hold viruses that have not yet affected the world. “As it melts, we could be exposed to very unusual viruses and hence diseases that we have never even heard about,” she explains. “So, the relationship between health and climate is a pretty close one.”

There are quite a few other lessons humanity can learn from the pandemic, Figueres says.

Global challenges don’t ask for a passport. They don't stop at any border, due to immigration.

First, global challenges “don’t ask for a passport. They don't stop at any border, due to immigration,” she says. “[The pandemic] should teach us the lesson that building walls is completely ridiculous in the face of global challenges.”

Second, exceptionalism is a myth. “We are only as vulnerable as the most vulnerable person among us on the planet,” she says. “As long as there's one person that has the virus, we're all exposed in one way or the other. To think that you're an exception to a global rule is ridiculous. The same thing goes for climate. As long as there are some populations that are affected — and we all know which of the populations are most vulnerable: always [those at] the bottom of the pyramid — we're all affected. So it's in our self-interest, actually, to act out of solidarity.”

And finally, she says, we’ve learned that in a world filled with risks, certain ones require closer attention than others.

Climate change, like the coronavirus, is a high-probablilty, high-impact threat.

“There are some that are less or more probable and there are [some] that have higher or lower impact,” she says. “The ones that we really have to take a look at are the ones that have both high probability and high impact. That is true of this virus. The same is true with climate: it is a high-probability, high-impact threat. And the quicker we understand that and begin to respond, the less we're going to suffer.”

In her book, Figueres details three “mindsets” she believes are essential to take on these global challenges. The first is “stubborn optimism.”

“I've learned that it's important to be stubborn, especially if it's for the common good,” Figueres says. “That's where that stubbornness comes from. The optimism, for me, [is] not a naive optimism; it’s not a blind optimism. It's actually a very educated and informed optimism that knows exactly what the conditions are, either on climate or on this virus. It is a choice we make to have a constructive, determined attitude in the face of any challenge…because if we start with an attitude of defeatism, then we probably stand very little chance of succeeding.”

A second mindset is one Figueres calls “endless abundance.” Figueres likes this one because it is provocative.

“It really calls into question: What do we mean by abundance and what do we mean by scarcity,” she says. “The reason we have gotten to scarcity is because we have been extracting, using and wasting, or just throwing aside, whatever we have extracted and used once. That has led to a scarcity of everything — a scarcity of clean water, certainly a scarcity of atmosphere [and] space. But it is quite impressive that, given the technologies we have now, we can actually create abundance.”

This means rejecting the opposite mindset, which is, “‘I'm going to take my piece and use it and then discard it,’” Figueres says. Or even worse, the zero-sum paradigm that says, “‘I’m going to win and in order for me to win, I'm going to make you lose.’”

“That zero-sum game, this unhelpful competition, is totally against a mindset of abundance,” Figueres says. “And when we let go of that, then we understand that actually, we can create an abundance that is good for all of us, and that we can all win.”

Figueres has a warning for the nations of the world, as they prepare to invest up to $10 trillion in economic recovery packages.

Figueres has a warning for the nations of the world, as they prepare to invest up to $10 trillion in economic recovery packages.

“If those $10 trillion around the world go into the fossil fuel industries and all of its derivatives, we then have cemented ourselves into a high-carbon, high-emitting economy for decades to come,” she says. “And we will totally close the door to the possibility we have right now of reducing our emissions according to science, which is reducing the emissions to one half of what we have right now by 2030.”

“Conversely,” she says, “if those recovery packages are designed with all of the crises in mind — the health crisis, the climate crisis, the oil crisis, and the inequality crisis — if we put our arms around all of these crises that are affecting each other and increasing each other, as opposed to treating them separately, in silos, and we say, ‘Let’s converge the solutions and let's be smart about how we are going to design and dedicate this fresh capital that is going to go into the economy,’ then we have the most extraordinary opportunity to really make a difference on all of those issues. But if we don't, if we actually take them one by one, sequentially, we are in very, very bad shape.”