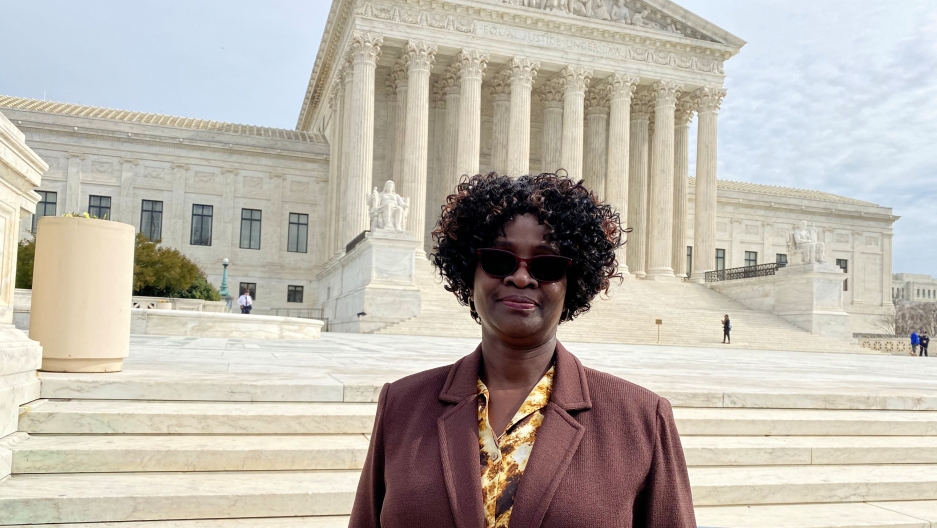 Doreen Oport, who was injured in the attack on the US Embassy in Nairobi, Kenya in 1998, stands outside the US Supreme Court after oral arguments in Washington, Feb. 24, 2020.

More than 20 years after the 1998 bombings on US embassies in East Africa, the Trump administration is closing in on a deal with the government of Sudan to settle claims owed to hundreds of victims.

“We have reached a common understanding with Sudan,” said US Assistant Secretary of African Affairs Tibor Nagy during a press conference on Thursday.

“This final agreement will reflect Sudan’s agreement to pay — it would include compensation in connection with claims relating also to non-US nationals killed and injured in the embassy bombings.”

“This final agreement will reflect Sudan’s agreement to pay — it would include compensation in connection with claims relating also to non-US nationals killed and injured in the embassy bombings.”

The negotiations are part of US efforts to support Sudan’s fragile civilian-led government, which formed after former President Omar al-Bashir, who had been in power for decades, was forced from office last year after months of popular protests.

Related: After revolution, Sudan still faces a squeeze of sanctions

This deal, if passed by Congress, could put the country one step closer to removing the State Sponsors of Terrorism designation, which Sudanese officials see as a key obstacle in emerging from decades of economic isolation. Others in Sudan see the terrorism listing, and related sanctions, as punishment for the crimes of a former regime.

The pressure to remove Sudan from the list has come from outside Sudan, as well.

“The only way Sudan will ever be able to break out of this cycle of poverty and desperation is to be freed from the impediments of sanctions imposed at the time of the previous government,” said UN High Commissioner for Human Rights Michelle Bachelet last month.

Prominent members of Congress, however, have urged the State Department to settle outstanding terror claims before removing Sudan from the State Sponsors of Terrorism listing.

For years, the Sudanese government has contested more than $10 billion in damages ordered by US courts, which had determined Bashir’s government had harbored the al-Qaeda terrorist group that planned the attack, killing more than 200 people and injuring thousands more.

“I think that Sudan has to put these cases behind them once and for all.”

“I think that Sudan has to put these cases behind them once and for all,” said Cameron Hudson, a senior fellow at the Atlantic Council and former director of African affairs at the National Security Council under the George W. Bush administration.

The proposed deal, if passed, would unilaterally release the claims owed by US nationals in an arrangement similar to the terror settlement agreement with Libya during the Bush administration. How much Sudan, — a country facing more than $60 billion in debt — will have to pay, remains in question.

Lawyers representing nearly 600 victims, mainly Kenyans and Tanzanians, worry the deal will shortchange their clients, paying them a small fraction of the compensation determined by US courts.

In February, during the Supreme Court hearing about punitive damages, The World interviewed Irene Kung’u Karithi, a Kenyan employee at the US Embassy in Nairobi, when it was attacked. She spent days sorting through the rubble for dead bodies of her colleagues and still suffers from hearing problems and mental trauma from the attack.

Shortly after the bombing, Karithi relocated to the United States, and became an American citizen.

The plaintiffs’ lawyers say that under the State Department’s proposal, victims like Karithi, who were foreign nationals at the time of the attack, would receive 25 times less than American victims.

“It’s going to be to discriminate against Africans and African Americans,” said Gavriel Mairone, one of their lawyers. “Pay US citizens $10 million, and those guys either nothing or a couple hundred thousand.”

Related: 'We are willing to die' for democracy, Sudan protester says

Foreign-born victims, however, represent the bulk of the claims owed by Sudan.

“By accepting this deal with Sudan, the US State Department is betraying both US victims and the American principles of equality and rule of law that the Sudan-back terrorists found so threatening 20 years ago,” said Doreen Oport, a former US Embassy employee who was injured in the attack in Nairobi.

The State Department, however, has defended the deal as an ideal compromise between victims and a cash-strapped Sudan.

“While non-US national victims would not receive the same levels of compensation, the substantial amount of compensation committed by Sudan demonstrates a good-faith effort on the part of Sudan to address their losses,” said a State Department official over email.

Although the provisional agreement represents a major step toward Sudan’s removal from the State Sponsors of Terrorism list, the actual removal process is exceedingly complex and bureaucratic.

“The termination of the designation of a state sponsor of terrorism is not going to be flipping a switch,” Assistant Secretary Nagy said.

Still, the plan, presented to Congress last month, reflects a new urgency on the part of the US to support a civilian-led government that risks being undermined by remnants of the Bashir regime.

“The biggest challenge that the US administration faces right now is that while there is a civilian government in Sudan currently, no one knows how long that government is going to last.”

“The biggest challenge that the US administration faces right now is that while there is a civilian government in Sudan currently, no one knows how long that government is going to last,” said Hudson of the Atlantic Council.

One year after the ousting of Bashir, Sudan has undergone unprecedented changes — expanding religious freedom, recovering billions in stolen assets, and appointing a new ambassador to the US for the first time in decades.

Still, the transitional government has yet to deliver on big structural reforms and continues to suffer from an embattled economy that has failed to address the grievances that brought demonstrators to the streets in the first place.

“There’s a risk that Sudan will continue to keep this tied up in courts. There’s an opportunity to get some payments now; you’ve waited 20 years to get anything,” Hudson said.

Lawyers representing foreign and naturalized victims, however, are skeptical.

“We said we would help to get other countries to donate. Because we have a list of countries that conspired with Sudan to bust US sanctions, part of which went to finance al-Qaeda,” argued lawyer Mairone, who said Sudan and the State Department have failed to negotiate with the victims directly.

“My clients are the ones that actually are poor. And have been devastated.”

How Sudan will pay even the proposed deal — reportedly $300 million altogether compared to the billions owed in court judgments — remains unclear.