In parks, beaches and living rooms across Morocco, families crowd around tables overflowing with food, waiting for the call to prayer. It’s the Islamic holy month of Ramadan, so it’s time to break the day’s fast with an iftar meal.

Iftar is a lively, social affair, and that upwelling of energy continues until dawn, with midnight city strolls and 3 a.m. street soccer.

“A lot of people, directly after they broke fast, they'd be out in the cafes, out walking around, out socializing,” said Soukaina Rachidi, a 29-year-old Moroccan American writer.

But not this year.

Authorities here imposed a strict lockdown on March 20, when Morocco had 80 confirmed COVID-19 cases. With a health system unprepared for a major outbreak, the government didn’t want to take chances. It restricted daytime movement to only essential shopping and doctors’ office visits. They also made masks mandatory in public and instituted a nighttime curfew from 7 p.m. — making the usual Ramadan revelry impossible.

Related: This Syrian doctor in NY is finally celebrating Ramadan with family 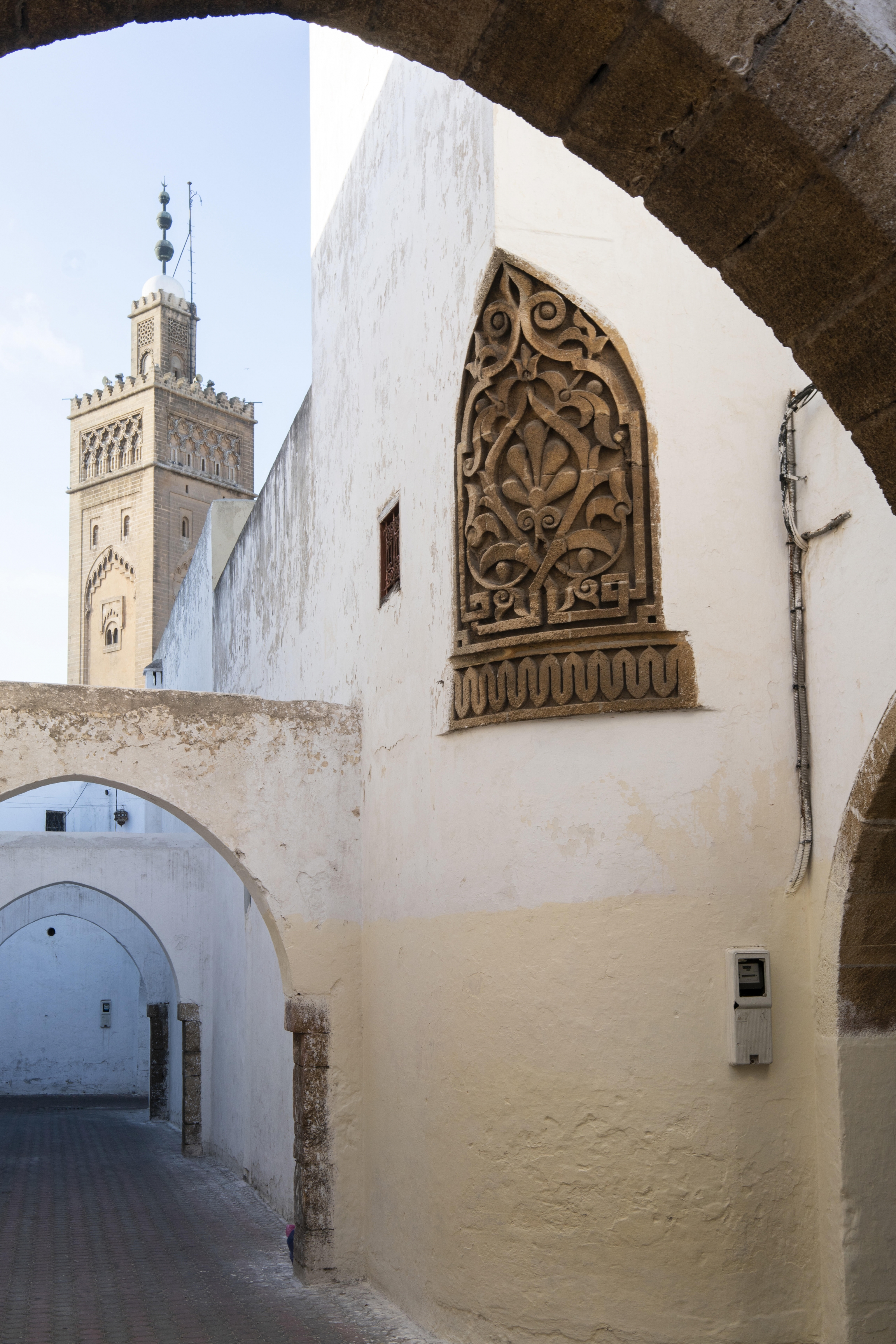 A closed mosque in the historic Habbous neighborhood in Casablanca.

“This has been a very different experience because people can't go out,” Rachidi said, confined in her home near Rabat.

But, there’s a silver lining.

“I feel like it’s a detox, it’s resetting the mind and the body and also the spirit. When your faith is put to the test, that’s when you know whether it's just a ritual or something you truly believe in.”

“I feel like it’s a detox, it’s resetting the mind and the body and also the spirit,” she said. “When your faith is put to the test, that’s when you know whether it's just a ritual or something you truly believe in.”

But one big ritual is missing.

“Ramadan is traditionally a time of people going to the mosque and praying in the mosque. That is the heart and soul of the Ramadan experience,” Rachidi said.

For the first time that anyone can recall, mosques are closed for Ramadan. That’s a big deal in a country where huge crowds would normally turn up to pray every night this month. Morocco’s biggest mosque, Hassan II in Casablanca, can host over 200,000 people, packed toe-to-toe. 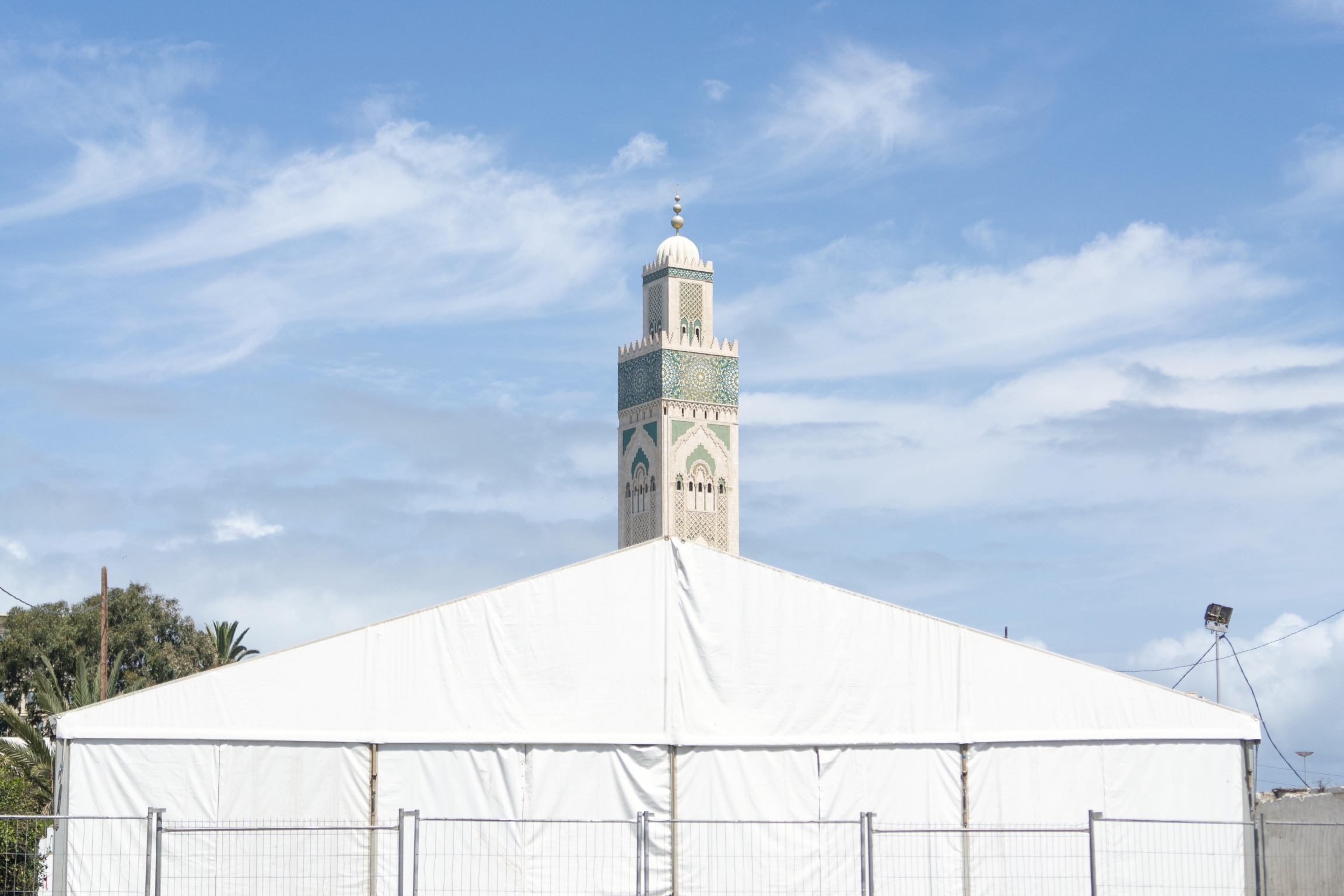 Authorities erected this tent for homeless people needing services during the lockdown. Behind it rises the minaret of the Hassan II mosque, which is now closed. Usually, Hassan II, Africa’s biggest mosque, gets as many as 200,000 worshipers nightly during Ramadan.

Everyone misses communal prayer. Some ultraconservative Salafi Muslims even condemned the closures as the state’s abandonment of Islam (they were arrested for “inciting hatred”).

But Rachidi sees this Ramadan as a questioning of ritual.

“Does you not praying in the mosque mean that Ramadan is null and void?” she asked. “Or does it mean that you can be all alone in a room and it has the same value?”

For Mehdi Ouizid, 24, living in the heart of Marrakech’s old city, it’s tough to come to terms with.

“It’s a little bit frustrating because it’s not the way it’s supposed to be,” he said. “There’s no salat [daily prayer] in the mosque, there’s no taraweeh [nighttime prayers] so, we kind of are locked up here as well.”

“It’s a little bit frustrating because it’s not the way it’s supposed to be,” he said. “There’s no salat [daily prayer] in the mosque, there’s no taraweeh [nighttime prayers] so, we kind of are locked up here as well.”

But, with mosques closed, Ouizid says families like his are finding community and sanctity right in their living rooms.

“It’s like we do a little mosque here at home,” he said. “I’m the one who prays with my family — I’m in the front line, my dad is behind me and then in the back there is my mom and my sister, and I do the Imam, I pray with them.”

Related: How coronavirus is changing the way Muslims celebrate Ramadan

Before the pandemic, Ouizid worked as a singer in a hotel. Now, he’s using his voice to recite scripture at home.

“It’s my first experience and it’s really a blessing,” he said.

“When you do prayer, taraweeh, you feel closer to Allah,” said Zakaria el-Aggari.

Like Ouizid, the 39-year-old accountant is also leading nightly taraweeh prayers at his home in Rabat.

Aggari works in tourism on the side, and he says he’s had to shut down his Airbnb. But he’s not thinking about the lost income. He says he’s grateful for the extra time with his wife and mother, and for the chance to play with his two young daughters.

“Now we know each other more,” he said.

He calls Ramadan “the time to see the account balance sheet with ourselves.”

Spending it in confinement this year offers a chance to really focus on the month’s spiritual meaning, he said: “I think it’s an opportunity to reconcile with ourselves and get closer to God.”

Rachidi says she feels the same. Spending time with friends until the early hours can be a way of avoiding what’s going on at home.

“We have to face a lot of the things that we've had coping mechanisms for that are perhaps outside the home.”

In confinement, she said, “We have to face a lot of the things that we've had coping mechanisms for that are perhaps outside the home.”

That was the case for one 28-year-old woman in Marrakech. She doesn’t want to use her name because of a disagreement with her father.

She lives with her sister, but when the lockdown started, her father called them home to Guelmim, a small city in the south. She agreed to go, but with a deep sense of dread. She and her father haven’t gotten along in years. On top of that, she has stopped practicing Islam, but she says she is afraid to tell him.

In Guelmim, she has to hide the fact that she doesn’t fast, eating in her room or on the terrace when no one is watching. 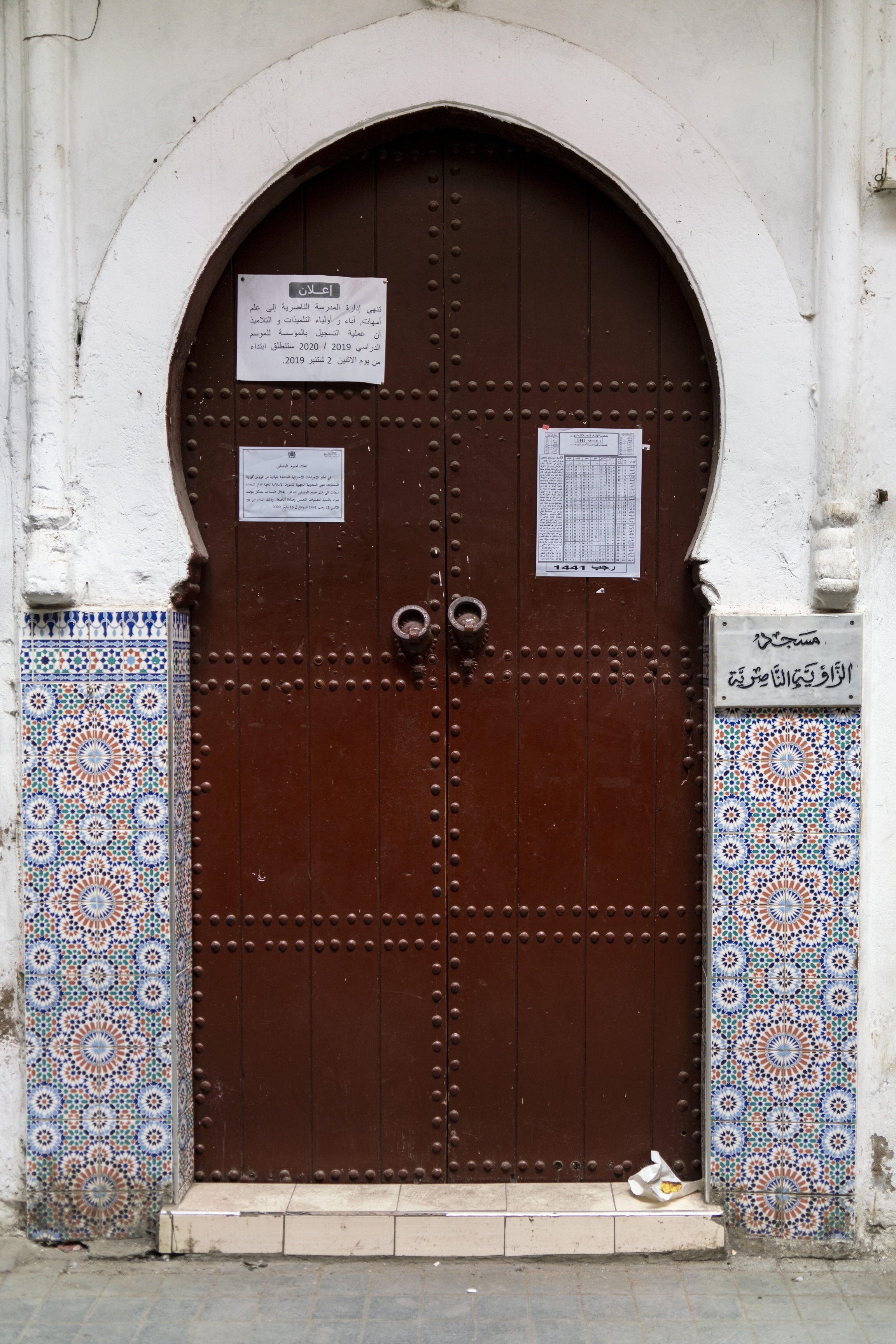 A closed mosque in the medina of Casablanca.

“It’s not comfortable because you know you're lying and it’s not nice to lie to the people you love,” she said.

At first, the two of them butted heads, as she had expected. But two months later, confinement with her father has defied all her expectations.

She says their relationship is better than ever. He even helped her cut her hair short — a look she’s always wanted to try but that Morocco’s conservative culture doesn’t approve of. They still don’t talk about religion.

But, she said, “He’s giving me the chance to talk. And he’s listening to me.”

All it took was time, and being cooped up in the same house. 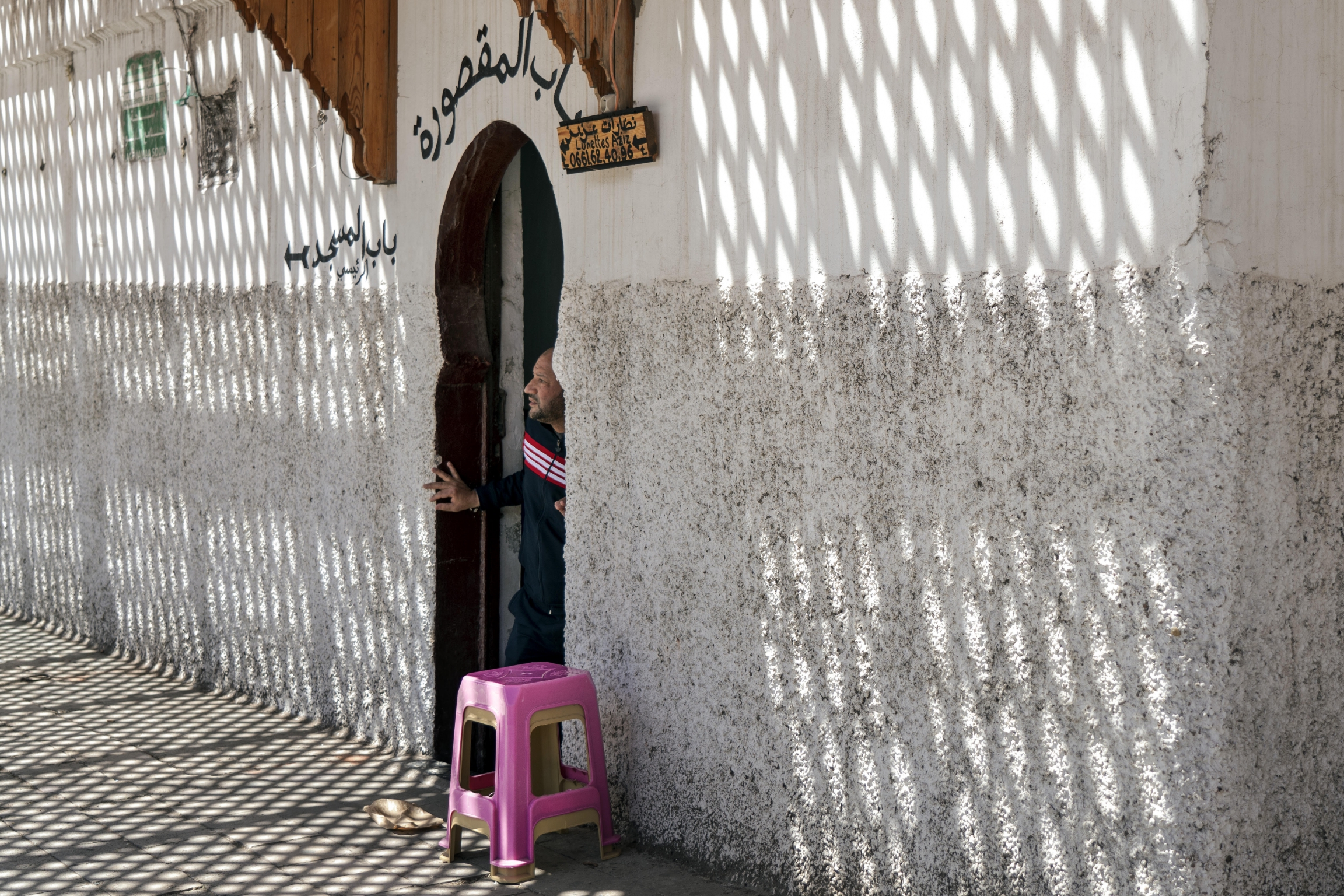 Imam Hamuda Nezhani peers out of the Souk Mosque in the Casablanca medina. The mosque is closed, but he comes daily to chant the call to prayer.

That's something many people are finding out this Ramadan.

“I think for the first time in my life and the lives of many people, we're making time for what actually matters,” said writer Rachidi.