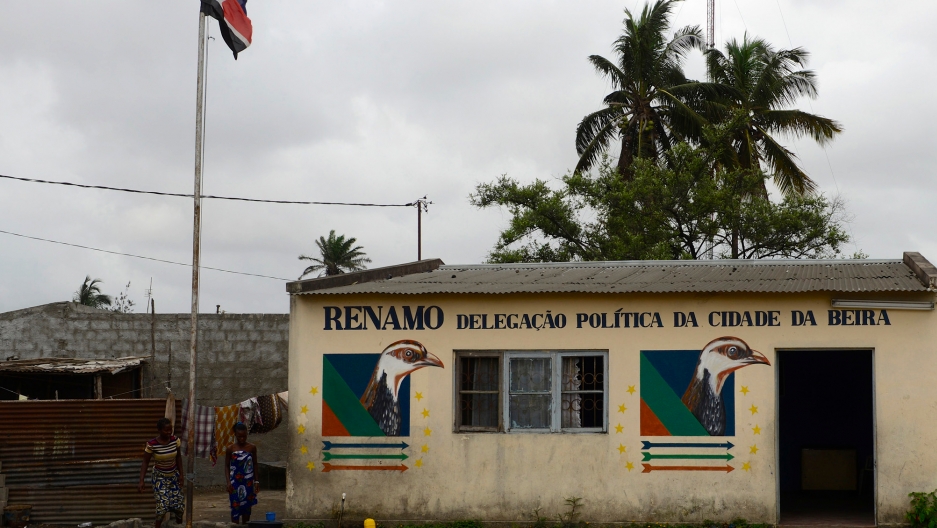 The abandoned headquarters of Mozambican opposition party Renamo is pictured in the port city of Beira, ahead of local government elections, Nov. 19, 2013.

This interview was featured in Critical State, a weekly newsletter from The World and Inkstick Media. Subscribe here.

How do relationships between combatants forged in wartime continue to shape political, economic, and social relations even after those combatants have been reintegrated and the conflict ends?

Wiegink's new book, “Former Guerrillas in Mozambique," is a groundbreaking ethnography of how relationships between combatants forged in wartime continue to shape political, economic, and social relations even after those combatants have been “reintegrated.”

Wiegink spoke with Sam Ratner of Critical State via email as part of their Midnight Oil series to find out more about her work on dispossession and resettlement studies.

Critical State: What is the hardest question you try to answer in your work?

Nikkie Wiegink: Now that I study dispossession and resettlement issues associated with coal mining, as well as civil war combatants and their lives after conflict, I’ve had occasion to think about what draws those interests together and makes me so curious about both of them. In a way, both are about understanding what underlies processes that are often framed as "bad" or "evil." What are the inner workings of war, but also what are the inner workings of dispossession caused by large-scale extractive projects? And how do the people involved in such processes make sense of them?

In my experience, people generally think of what they do and who they are as good. Thus while people may be part of processes that engender dispossession or violence, as a mining official or as a combatant or as something completely different, people often consider their daily life and work, or something that they define as something worthwhile, which can mean many things. I'm fundamentally curious to understand who these people are who work in these constellations and how they talk about their work and their lives. When I was researching former Renamo guerrillas in Mozambique, that meant understanding what war participation (among many other things) means in people’s life trajectories.

Disarmament, demobilization, and reintegration programs frame post-war reintegration as a rupture — people were in society, then left it to go to war, and are now returning to their pre-war relationship to society through reintegration — but that isn’t how many combatants experience it. Instead, I found that former fighters’ life trajectories comprised of a mixture of ruptures and continuities of relationships and networks, which included their relatives, the spiritual world, fellow former fighters, political parties and much more.

How do you go about answering that question?

Part of it is basic ethnographic research — to study people’s lives and the stories they tell about their lives from within. In hours-long interviews, I'd go through all the stages in peoples' lives. But it’s also important to be part of peoples' lives and see how their lived experiences compare with the stories they tell. For example, Renamo former combatants can tell you about how they found their wife in the war and how they connect to their fellow former combatants, but it's another thing to see how every week they would drink together, how they engage in relationships of trade and patronage dynamics with fellow war veterans. My research thus involves being part of people’s everyday lives, as much as possible, and getting the widest possible picture of peoples' experiences.

In Maringué, an area of central Mozambique where I did fieldwork and where many ex-combatants from the Mozambican civil war live, people would tend to say, "Everything is good, the war is over, we are all brothers and sisters now." In their narratives, people would explicitly not emphasize the political divisions that continued to characterize post-war Mozambique. But just by being there and going to church gatherings and masses, at a certain point, I realized that oh yeah, that church is a church primarily associated with Renamo, that church is associated with Frelimo, and that people would go out of their way not to cross political lines.

Similarly, it took a long time for me to understand that when people would describe someone as being from a certain area, they meant it often as a political identifier more than a geographical one — because a reference to some areas meant they were associated with Renamo, while others would be indications of Frelimo. It took time to understand the way people talk about things — especially about politics in the case of my research.

I was in Maringué for 14 months, and I still probably did not get half of it. There are many layers of meaning behind what people say. That's the real value of doing participant observation next to the interviews.