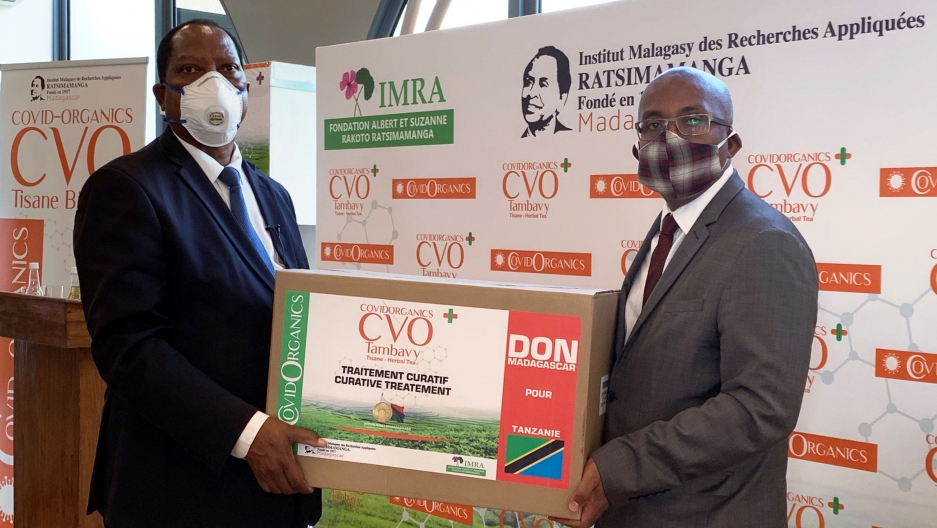 Palamagamba Kabudi, Tanzania's foreign minister, receives a package from his Madagascar counterpart, Tehindrazanarivelo Djacoba, of the COVID Organics, the plant-based "cure" promoted by Madagascar's President Andry Rajoelina as a remedy against the coronavirus disease (COVID-19) in Antananarivo, Madagascar, May 8, 2020.

“COVID Organics, needless to say, is a preventative and curative remedy against COVID-19. It works very well,” Rajoelina said during an interview with French media on Monday.

The herbal drink, developed by local scientists, comes from traditional medicinal plants, including Artemisia arrua, which is native to China, the president said.

“It’s a very popular herbal medicine. It’s one of the most frequently used herbs in parts of the world.”

“It’s a very popular herbal medicine. It’s one of the most frequently used herbs in parts of the world,” said professor Chrisna Gouws, a biochemist researching traditional medicine at North-West University in South Africa. “The scientific community became interested because it contains artemisinin, which is a recognized anti-malarial treatment.”

Traditional medicine continues to be widely used across Africa. According to President Rajoelina, 80% of the population of Madagascar uses it.

“There are quite a few prescribed Western medicines that have their source in African herbal remedies,” Gouws added, citing the chemotherapy drugs vinblastine and vincristine, which are derived from the Madagascar periwinkle plant.

Madagascar isn’t the only one interested in exploring the potential use of Artemisia arrua in fighting the coronavirus. Last month, the German Max Planck Institute of Colloids and Interfaces announced its partnership with an American company to test the plant’s extracts and derivatives against COVID-19.

Currently, however, there is no evidence that the plant is effective in preventing or treating the new coronavirus.

“We would caution and advise against countries adopting a product which has not been taken through tests to see its efficacy against COVID-19.”

“We would caution and advise against countries adopting a product which has not been taken through tests to see its efficacy against COVID-19,” said the World Health Organization's Africa director, Dr. Matshidiso Moeti.

“Anything that is being used should be done under conditions of [a] clinical trial, where the evidence can be collected and it can be assured that it is not a risk to people’s health,” she continued.

New medicines must be tested & be in line with ethical & scientific standards. We caution countries against adopting products that have not undergone rigorous clinical trials to ensure their safety & effectiveness against #COVID19. One fight. pic.twitter.com/WhthmPUCfy

“They unanimously agreed that clinical trials must be conducted for all medicines in the region, without exception,” according to a WHO Africa post on Twitter.

They unanimously agreed that clinical trials must be conducted for all medicines in the Region, without exception. pic.twitter.com/fCKYiYiMqb

“It’s widely seen that we have ignored these traditional treatments for a long time, possibly to our own detriment,” Gouws said.

Still, she says African traditional medicine should undergo the same scientific process as anything created in a lab, especially because certain herb-drug interactions can be dangerous.

“You need to know that it’s proven effective for the specific medical application; you must know it is proven safe for consumption, especially when there are underlying medical conditions,” Gouws said.

Those concerns, however, haven’t slowed down Madagascar’s president, who has been donating COVID Organics to other African countries. As of Wednesday, Madagascar had reported 212 coronavirus cases and no deaths.

“The vast majority of patients who were treated with this remedy are all the proof you need that it works,” said President Rajoelina, claiming that most patients who had received the herbal remedies improved within seven to 10 days.

The African Union has reached out to Madagascar to review its technical data and information for COVID Organics.

“This review will be based on global technical and ethical norms,” African Union said in a recent press release.