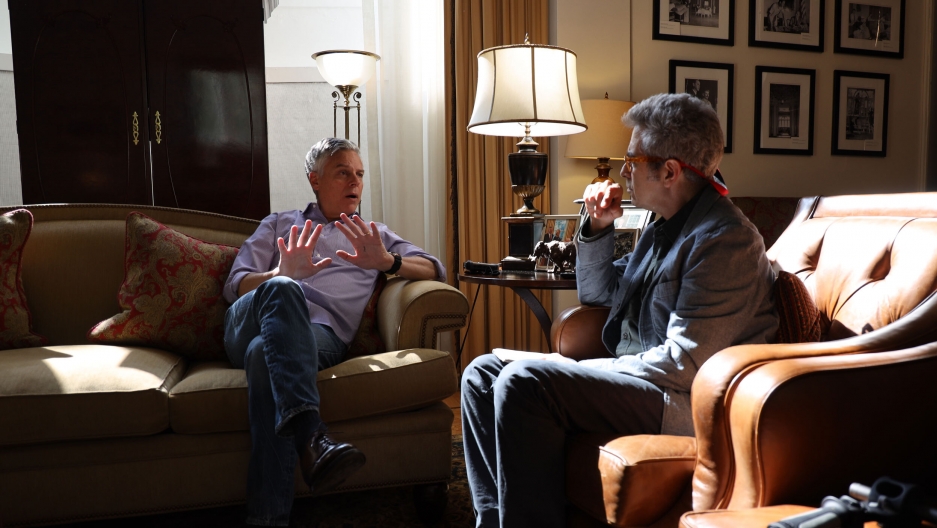 Ambassador Jon Huntsman Jr., then the US' chief diplomat to Russia, sat down for an interview with The World's Marco Werman in Russia in 2019.

Sino-US tensions have mounted over the coronavirus outbreak, with Trump blaming China for causing tens of thousands of deaths and millions of job losses in the United States.

These renewed tensions between Beijing and Washington threaten cooperation on halting the spread of COVID-19 and make completion of the landmark trade deal between the two superpowers less likely.

Under the Phase 1 deal signed in January, Beijing pledged to buy at least $200 billion in additional US goods and services over two years and Washington agreed to roll back tariffs in stages on Chinese goods.

But US President Donald Trump has threatened to terminate the deal if China fails to meet its purchase commitments.

Jon Huntsman Jr., who served as the US ambassador to China and Russia and is currently a Republican candidate for governor in Utah, spoke with The World’s Marco Werman about the deterioration of relations between China and the US.

Amb. Huntsman, relations between China and the US are at their lowest point in years, and both sides seem to be fanning the flames. Is the Trump administration taking the right approach on China?

Time will tell and history will bear that out. But what we do know is the relationship today is ... substantially different and bigger [than it was after the post-Tiananmen Square breakdown in relations]. Now we have 350,000 students. Economic relations that are $800-900 billion strong. Collaboration in the Security Council of the United Nations. Work around the Horn of Africa. I mean, the list goes on and on and on in terms of how the relationship has been deepened over the years. So the stakes are higher, and there's a lot more to lose if this period does not pan out.

Yet even in those troughs, though, I mean, it was George Bush expressing justifiable concern over Tiananmen and human rights after that massacre. We're now in the midst of it of a pandemic. And the president is pointing a finger at China, using language like the 'Wuhan virus.' Is that smart diplomacy?

What is smart diplomacy is to figure out how we can get a cure. And one thing is for sure: the laboratories and the scientists in both China and the United States are more likely to get us to that endpoint faster working together than apart.

So how do we get back together? Because it doesn't look like that's where both sides are willing to go right now.

I think this is going to be a longer-term trough, because I think some of the fallouts of the implications are going to deal with the economic relationship. So if you argue that supply chains are likely to be broken up and investment patterns are going to change, this isn't a short term trough. I think it's a longer term trough. And what the relationship looks like, what you can build a relationship around in the post-COVID period, I think is a question mark. So the economic relationship, which is really the sweet spot of the US-China relationship, is going to change. There's no doubt about that. And what that means longer term, I think, is really, really a question mark. But I think it does mean that this trough is going to last longer than some people might realize.

China is also tightening the screws on Washington, with Beijing letting its so-called "wolf warriors" mark US diplomats online, peddling misinformation and hoaxes. What occurs to you about how bothered the Chinese are right now when you hear the rhetoric coming from Beijing?

No, I don't think they decouple. I think you have investment patterns that change, that diversify. I think you have recognition that there is risk of dependency, and that promotes some changes. I think there's going to be more of a flight to safety. So when you have calamities like this take place in the world, there's generally a flight to safety. The US market is always deemed to be the safest market in the world. So I think all of these are going to effect the economic relationship. But I don't think you go from almost a trillion dollars in bilateral trade to nothing. I think there are going to be a lot of products that go back and forth with a large consumer class in China, hundreds of millions strong. They will still be buying products — that's not going to discontinue. So the relationship will continue. It will just change. It'll be transformed.

The Trump administration is considering demanding reparations from China for the virus and suspending what's called sovereign immunity, so China can be sued for virus-related deaths. Do you think that's a good idea?

I'm not in a position to say. But what I think the greatest punishment that will be inflicted on China is likely to be is a loss of confidence in the marketplace and diminished investment flows. So the one thing that China really does worry about is their key economic indicators. So I suspect that Xi Jinping wakes up every morning and looks at the dashboard of indicators like employment, like inflation, because we remember exactly what those data were in the runup to spring of 1989 before Tiananmen Square. And they weren't healthy. It wasn't just the students who turned out in Tiananmen Square. They turned out for a reason. You know, the death of beloved leader Hu Yaobang, but there was a backdrop that was basically a really bad economic set of circumstances. And I think the leadership learned from that point forward, it's the economy, the economy, the economy.

How concerned are you that Trump will further politicize the animus between Washington and Beijing to demonstrate that he is tough on China? I mean, are we looking at a presidential contest where it's Trump and Joe Biden competing to see who can present themselves as the toughest?

Every presidential election in recent memory has had China as a centerpiece of a foreign policy discussion.

If there are no constructive solutions, though, that either candidate offers, I mean, what difference will it make?

Well, they'll have to come up with constructive solutions. I mean, what do you want the relationship to look like? You can't wish a major superpower away. You've got to deal with them. So what are the parameters with which you're going to deal with China? What are your red lines? What is it that you're going to promote? What are you not going to promote? There's plenty to talk about, in fact, now more than ever. This is when we really should be discussing the relationship.

Ambassador, I'd like to play an exchange that happened yesterday at the White House. CBS reporter Weijia Jiang, who is Asian-American as president Trump why he kept comparing US testing for the coronavirus with other nations. Here's that exchange.

The president then abruptly ended the briefing. CBS says Jiang describes herself and her Twitter bio as a Chinese-born West Virginian. Ambassador Huntsman, what is your take away from that exchange?

Well, I have a Chinese daughter, and I think the optics are bad. I think they're really bad. And it's something that I don't like to see.

How do you think moments like that are received in Beijing?

My experience with Chinese leadership is that they spend a lot of time analyzing the style of leaders, their approach, their negotiating style, their priorities, their personalities. I'm not sure that they're surprised by a whole lot that the president does.

You were President Trump's ambassador to Russia while the Mueller investigation was going on. What is it like to try to communicate serious policy to a hostile government when the president is frequently less than serious in how he communicates?

The environment was impossible. Yet we had many things that we were talking about, and many priorities in the relationship that had to be furthered. There was no desire to collaborate on either side. There was no desire to engage on the part of Congress in the United States or the Duma in Russia. So it basically fell to a few people to keep the mechanics of the relationship in check.