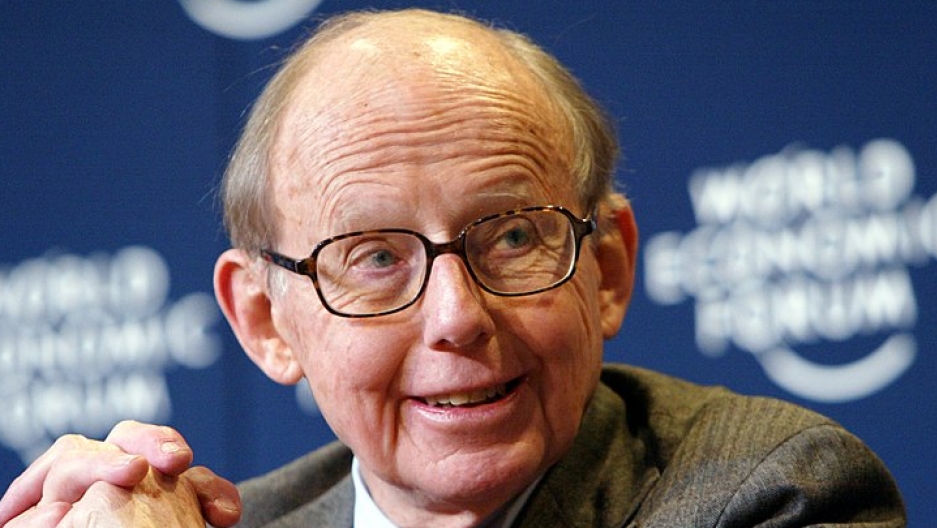 Samuel P. Huntington, chairman, Harvard Academy for International and Area Studies, USA, pictured during the "When Cultures Conflict" session at the 2004 meeting of the World Economic Forum in Davos, Switzerland, Jan. 25, 2004.

American security studies’ most problematic fave is the late Harvard political scientist Samuel Huntington. A recent dataset of graduate international relations syllabi lists Huntington’s work as appearing on well over 200 syllabi and reading lists, and at this point, generations of both political science students and security professionals have been exposed to his (in)famous “Clash of Civilizations” thesis.

There have been many efforts to fire Huntington from the security studies canon, for reasons ranging from the racism ingrained in "Clash," to its lack of analytical use now that so few of its predictions have panned out, but his work keeps finding its way back to the fore.

Before "Clash," Huntington’s leading security studies contribution was in his work on civil-military relations, captured in his book, “The Soldier and the State.” In the latest edition of International Security, Marquette political scientist Risa Brooks takes aim at "The Soldier and the State” for the paradoxes that its recommendations cause for members of the military.

In “The Soldier and the State,” Huntington argues for a civilian, democratic government to have what he called “objective control” of the military. That sounds pretty good, and in fact, sounded so good that much of the way civil-military relations are structured in the United States is based on Huntington’s model.

Former West Point commandant Gen. William Rapp offered a hint of Huntington’s influence when he said, “Soldiers have been raised on Huntingtonian logic and the separation of [civilian and military] spheres of influence since their time as junior lieutenants.”

One of Huntington’s core concepts is that military officers should be studiously apolitical, and willing to follow legal orders from civilian leadership no matter what. Recent research shows that the apolitical norm is eroding.

Recently, Brooks argues, the overwhelming Huntingtonian influence has begun to break down and the seams of his model are beginning to show. One of Huntington’s core concepts is that military officers should be studiously apolitical, and willing to follow legal orders from civilian leadership no matter what. Recent research shows that the apolitical norm is eroding. A survey of 4,000 active officers found that a quarter believed that active-duty military members should feel free to publicly criticize elected officials, and a third came out against any restriction on speech by the active military.

That trend has also picked up in practice, with social media expanding opportunities for active-duty troops to speak out. Half of the respondents to a 2017 survey reported seeing active duty friends make disparaging remarks about political candidates online, and a third reported rude comments about the commander-in-chief.

Related: Analysis: Big data predict where — but not when — conflict happens

Of course, civilians have also played a role in the politicization of the military. US President Donald Trump frequently uses the military as a backdrop for political events, claims to be widely supported by members of the military, and has urged service members to lobby Congress on his behalf. Those actions mirror a larger trend within the civilian population, where Republicans are now significantly more likely to express confidence in the military than Democrats. The longer we act like Huntington’s apolitical norms are holding, Brooks argues, the more dangerous their erosion could be.

Huntington also envisioned a version of objective control in which, as Brooks writes, “civilians formulate goals without consideration of the military means to achieve them and then provide that formulation to military leaders.” If that sounds like a perverse way to make decisions, it is. By discouraging civilian engagement with the specifics of military means, Huntingtonian civil-military relations actually undermines a concept it’s ostensibly supposed to preserve: civilian oversight over the military.

Multiple studies have shown that the majority of military officers believe civilian leaders should take their word for it on military issues, yet history is replete with instances when even war efforts — the military’s core competency — suffered for lack of civilian input.

Multiple studies have shown that the majority of military officers believe civilian leaders should take their word for it on military issues, yet history is replete with instances when even war efforts — the military’s core competency — suffered for lack of civilian input. In the American Civil War, for example, Lincoln’s (admittedly pre-Huntington) slowness to meddle with the plans of his top generals saw the Union throw away many advantages in the first years of the war.

Finally, Brooks makes the case that devotion to Huntingtonian norms actually harms the US in the pursuit of its strategic goals. Questions of strategy are inherently political, which means, per Huntington, that leading military officers don’t want to get involved in them. On one hand, that’s fine — civilian leaders should be able to make their own strategic decisions. On the other hand, staying away from strategic discussions leaves military leaders with a lot of time and political capital on their hands, and they tend to use it to argue for greater tactical and operational capabilities for their services. Aside from raising broader questions about the military-industrial complex, that also creates a cart and horse problem. If tactics are supposed to follow strategy, but military leaders are influencing tactics-shaping decisions like whether to invest in new aircraft carriers without being involved in strategy decisions, then we end up in a place where our strategic discussions are shaped less by national interest and more by questions of what to do with all these new aircraft carriers we just bought.

It is time for the US military to rethink what it means to expect its service members to be apolitical.

Overall, Brooks argues, it is time for the US military to rethink what it means to expect its service members to be apolitical. The current structure of civil-military relations is creaking, which calls to mind the whole reason why “The Soldier and the State” became popular in the first place — when that structure crumbles, things get ugly fast.