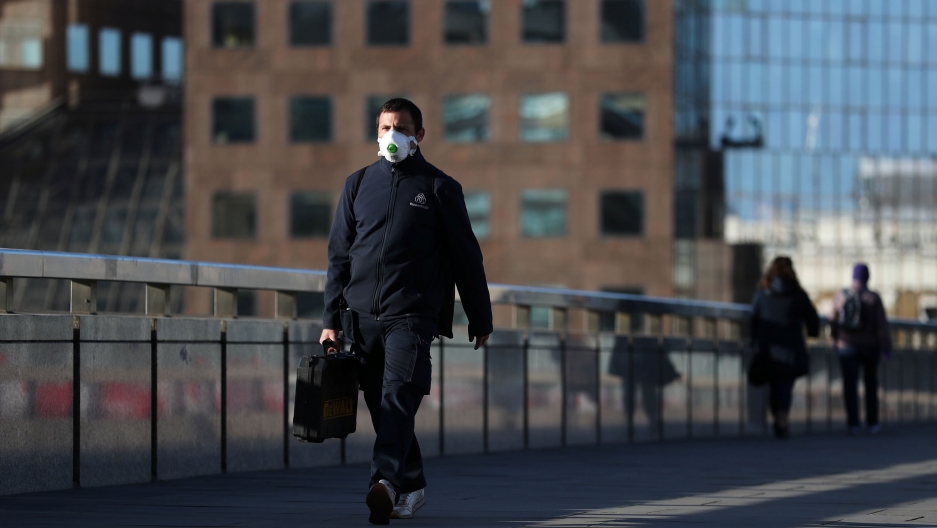 A man wearing a protective face mask walks along London Bridge following the outbreak of the coronavirus, in London, Britain, May 11, 2020.

After his attempt to plot a nuanced exit from the coronavirus lockdown prompted widespread confusion, British Prime Minister Boris Johnson on Monday will offer additional details of how to get the economy back to work.

In an address to the nation, Johnson said the coronavirus lockdown would not end yet but encouraged some people to return to work, though the leaders of Scotland, Wales and Northern Ireland said they were sticking with the existing "stay-at-home" message.

"This is not the time simply to end the lockdown," Johnson said on Sunday evening. "Anyone who can’t work from home, for instance those in construction or manufacturing, should be actively encouraged to go to work."

Johnson said people would be allowed to exercise more and some manufacturing workers could go back to work, while some children might be able to go back to school in June.

The government will publish 50 pages of detailed guidance, Foreign Secretary Dominic Raab said on Monday. Raab said some people could go back to work from Wednesday.

But Johnson's attempt to set out what his government called a 'roadmap' out of the lockdown prompted disagreement among the United Kingdom's constituent parts and criticism from opposition parties which said he had confused the public.

Opposition Labour Party leader Keir Starmer said Johnson had raised more questions than he had answered and there was now the prospect of different parts of the United Kingdom pulling in different directions.

"Nobody has seen the guidelines yet," Starmer said. "It's a bit all over the place."

The decision to replace the government's "stay-at-home" slogan, drummed into the public for weeks, was criticized by opposition parties who called the new "stay alert" message ambiguous.

Scottish First Minister Nicola Sturgeon said the only modification she was making to lockdown measures was to allow people to exercise more.

"I don't think to move more quickly would be right in Scotland," Sturgeon said.

The British government's quarantine plans were also unclear: Johnson said on Sunday it would apply to air travellers, though it was unclear whether it was broader.

"And then we will or won’t, something or other."

By Guy Faulconbridge and Michael Holden/Reuters