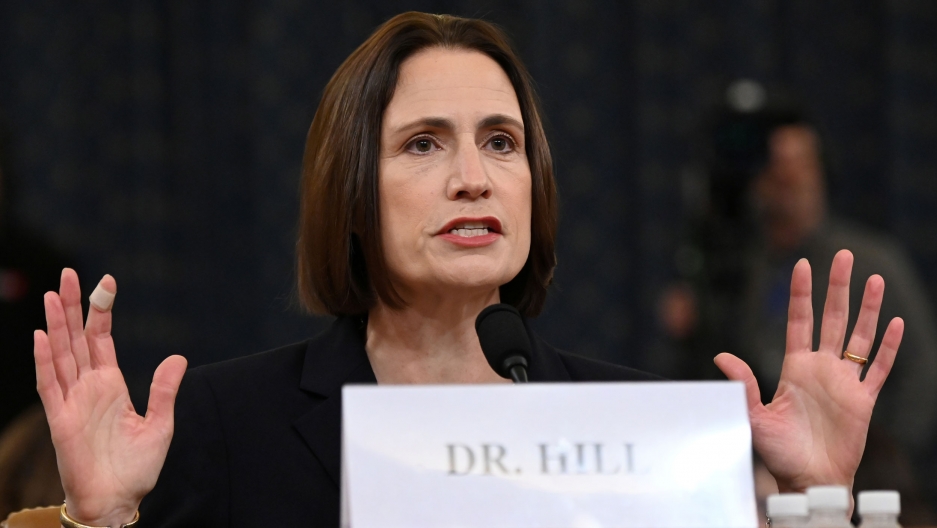 Fiona Hill, former senior director for Europe and Russia on the National Security Council, testifies before a House Intelligence Committee hearing alongside David Holmes, political counselor at the US Embassy in Kyiv, as part of the impeachment inquiry into US President Donald Trump on Capitol Hill in Washington, US, Nov. 21, 2019.

Putin's overture was the latest in a series of contacts with Washington with which Moscow is keen to rebuild relations frayed over everything from election hacking allegations to Syria. Ties with London remain badly strained over the poisoning of a former Russian spy and his daughter in England.

The telegrams were among many Putin dispatched to the Soviet Union's World War II allies on the 75th anniversary of the end of the conflict in Europe.

Russia, which marks the unconditional surrender of Nazi Germany on May 9, the day after "Victory in Europe" Day, has been forced to scale back commemorations due to the coronavirus.

Fiona Hill served as the senior director for European and Russian affairs on the National Security Council and testified during the impeachment proceedings against US President Donald Trump, where she spoke about the need to counter Russian interference.

"We need to seek ways of stabilizing our relationship with Moscow even as we counter their efforts to harm us," Hill said during a November 2019 impeachment hearing. "Right now, Russia's security services and their proxies have geared up to repeat their interference in the 2020 election. We're running out of time to stop them."

Hill is currently a senior fellow at the Brookings Institution in Washington, DC. She spoke with The World's Marco Werman about recent developments in Russia.

Marco Werman: Fiona Hill, how would you assess Russia's response to the coronavirus pandemic so far?

Fiona Hill: Well, Russia's response has been surprisingly similar to the responses that we've seen in many other countries. Not especially well-organized, a great deal of tension between the central government and regional governments, the same lack of personal protective equipment for health care workers, overstress on the public health care system overall and hospitals, and also a remarkable lack of testing and a lack of information about the actual data on the spread of the virus and the numbers.

So we've actually found that the Russians have been just as flat-footed as many of their neighbors in Europe and in a strikingly similar to some of the things that happened here in the United States as well.

Vladimir Putin seems to be absent through a lot of this. How has Russian leadership functioning right now?

Well, this is actually a real challenge for Putin because he just announced in January of this year, ahead of all the information on the coronavirus, that he was intending to try to expand out his current presidential terms that could take him out to being Russian president to 2036, when he would be in his 80s. And as a result of making that decision, he's turned himself into the wild card in the political system, because it was an acknowledgment that there's no other potential successor to Vladimir Putin in the offing, something, in fact, deeply destabilizing. So the idea that he might get sick — I mean, this is a deeply destabilizing idea for the Russian political system. So I think that President Putin has been lying low just to make sure that he's not infected.

Related: Russia's prime minister tested positive for COVID-19. What does it mean for Russian politics?

With the sharp decline in the global economy that we're all seeing now and oil prices in particular, how much is this shaking Russia's economic stability? I mean, is it at a point where you can envision political upheaval?

Not quite, yet. The one thing to bear in mind for Russia is that they're in a much better financial situation than pretty much every other country, because since Putin came into power in 2000, over the last 20 years, what the Russian government has done is address many of the factors that caused, first, the collapse of the Soviet Union, and then the collapse of the ruble and a massive economic dislocation in the 1990s under Boris Yeltsin. At that period, Russia was so indebted that essentially the country was bankrupt and Putin has turned that all around.

Now, admittedly, that was the result of steadily rising oil prices, but the Russian government has been extraordinarily careful with macroeconomic stabilization and also maintaining the sanctity of these funds. They’ve been quite modest in pegging of their budget and they were hoping that, under a normal circumstance, they would have sufficient reserves to tide Russia over any massive economic downturn — but thinking that this wouldn't go on for a prolonged period of time. And this was another miscalculation that Putin made when he decided to take on the Saudis on oil production cuts. He actually thought that he had much more leverage than it turned out that he did because he was banking on the idea that there was more demand for oil. And clearly the pandemic has reduced that demand for oil. So this is a real problem.

Fiona Hill, you're no longer in the Trump White House, but when you first started working in the administration, the stated goal was to improve relations with Russia. So where do the US and Russia stand today and how is the current reality affecting those relations?

Well, clearly there's been an awful lot of tensions within our own domestic politics in the US, which made it quite difficult to stabilize the relationship with Russia. And that's for a very good reason, obviously, given what Russia did in terms of its attempts to influence the 2016 elections and all the fallout that we've had from that. There's also been quite a few problems with Russia on the international stage. We've had all kinds of things in Syria, you know, not least the use of mercenary forces that got into clashes with the US military, tensions over Ukraine. At every point when there's been an effort to try to move the relationship forward, something has happened. I still think that there's an opportunity to do something on arms control. So there are a set of issues that we can talk about with Russia but right now, we're in, of course, our campaign cycle. So it's unlikely that, for the US part, we'd be able to do too much.

Fiona Hill, many Americans became aware of your work, of course, as a result of your testimony during the Trump impeachment hearings. Among other things, you reminded Congress and the American public that Russia was in 2016 and today still is trying to meddle in the US democratic process. So how vulnerable is the US today as we approach the 2020 presidential elections?

Like every society, the United States is vulnerable because of our use of social media and just the way that that helps to shape public opinion. The problem that we face is what all of us refer to as the "hacking of the minds" to influence opinion, and this is where the most work has to happen. You and others may recall that during the testimony, I tried to stress the importance of being aware about how our own political divisions and the work that we do ourselves as part of our own political campaigning to discredit opponents can be used as the raw material for external influence operations. So any disinformation that is created by political parties, to favor their own candidate in a domestic environment, can also be used by a foreign opponent as a means of discrediting our whole democratic process. So it's the amplification of our own discord. And this is really the risk that we have today.

Related: Russia is trying to spread a viral disinformation campaign

Let me just circle back briefly to Victory Day in Russia — the end of World War II in Europe. As you look at the coronavirus, what thoughts occur to you about how this disease is recalibrating the planet the way World War II did 75 years ago?

I think, you know, this is the right analogy to look at it. This is going to be massive dislocation as a result of the pandemic. It will be akin to having gone through a wartime. Admittedly, there won't be the physical infrastructure destruction that we saw after World War II, but we will have destroyed so many of the lines of communication, supplies, markets and the economies in a similar way out of the necessity of dealing with this.

The other thing that we have to bear in mind after World War II, is the countries banded together to find a way forward out of this. There is an opportunity here for us all to pull together to get out of the consequences of a pandemic together. We're all in the same predicament. As I mentioned at the beginning, it's striking how much Russia has mirrored the problems that have been faced in the UK, Spain, Italy, the United States, for example, in terms of how hard it's been hit by the pandemic for similar reasons. So there is a basis in which we could start to work together. And, you know, I think we have to remain somewhat optimistic about the possibilities there as a goal to work towards.