May 9 in Moscow usually comes with a display of military might as dignitaries and citizens mark Victory Day to commemorate Nazi Germany's surrender in World War II.

But as Russia's cases of the coronavirus skyrocket, particularly in the capital, Red Square will be free of its usual ceremonial procession. On the 75th anniversary, there will be no rumbling tanks, troop formations or mass crowds memorializing the approximately 11 million soldiers in Soviet uniforms who died in the war.

Some of the planned events will move online or skyward with air displays and fireworks. But the absence of the pomp that usually accompanies May 9 in Russia could prove problematic for President Vladimir Putin.

Before the novel coronavirus struck, Russia had been on the cusp of revising its constitution to allow Putin to retain power into 2036 — making for a nearly 40-year reign. The pandemic postponed the planned April referendum to bring popular legitimacy to that change, and the May 9 celebration to cap it off.

Related: 20 years of Vladimir Putin in power: a timeline

“May 9 was going to be the pièce de résistance of all of this."

“May 9 was going to be the pièce de résistance of all of this — the 75th anniversary of the end of what Russians call the Great Fatherland War, the great kind of restoration of Soviet power after the devastation of World War II,” former presidential adviser and senior fellow at the Brookings Institute Fiona Hill told The World. “And it was really for Putin to cement himself, clearly, with other world leaders in attendance, as the father of the nation, as the senior leader who would be taking Russia forward and working things out for the next foreseeable decade."

But the pandemic has taken Russia by storm. The recent COVID-19 diagnosis of Prime Minister Mikhail Mishustin is a reminder that even well-placed politicians are at risk. And the push to extend Putin’s rule is an indication that there is no presumptive heir to take his place.

“So, the idea that he might get sick … or end up indisposed in the way that we saw Prime Minister Boris Johnson in the UK — I mean, this is a deeply destabilizing idea for the Russian political system,” Hill said. “There's a lot of trepidation now within the political system about what happens next, including to Vladimir Putin himself.”

Russia is also contending with a crumbling post-Soviet health infrastructure. Doctors have sounded the alarm about conditions in hospitals. Within the last two weeks, three health officials who lodged complaints have fallen out of windows, leading to speculation that defenestrations — which have a history linked to the KGB — have been orchestrated.

While other countries have experienced a surge in patriotism during the pandemic — something that May 9 usually provides — the crisis hasn't elicited the same response in Russia.

"Russia is, I think, the only country that has not experienced the 'rallying around the flag' effect."

“Russia is, I think, the only country that has not experienced the 'rallying around the flag' effect,” political scientist Ekaterina Schulmann told The World. “Whenever something extreme happens, people tend to look up to the powers that be in hope for help or guidance. … But in Russia, it has not happened.”

Indeed, Putin's public opinion rating dropped to a historic low —59% — in April, according to polls by the independent Levada Center.

“Both the ratings of trust and the ratings of approval of the president have not, to put it mildly, have not risen with the epidemic,” Schulmann said. “Evidently, this tendency of lower trust towards every political institution that we have seen since at least the beginning of 2018 has been too strong to be influenced by any outward, any external event, even the event of such magnitude as the epidemic.”

Related: Russia's prime minister tested positive for COVID-19. What does it mean for Russian politics?

Some of Putin's highest ratings in recent years followed the 2014 Russian incursion in Ukraine and the illegal annexation of Crimea. Domestically, the action was presented as an effort to “reunify” the Russian nation, but the continued conflict in Eastern Ukraine and breach of Ukraine's territorial sovereignty has put Russia on the receiving end of international sanctions.

The pandemic could present a theoretical “window of opportunity” to resolve that conflict, but there is a lot of uncertainty, Hill said. It largely depends on the pandemic's effect on the Russian economy and a calculation of whether Russia would benefit from improved relations, especially with Europe.

“The question also, though, would be how would that play into Russian domestic politics?” she said. “Would that [have] been seen by the Russian population as a positive step, too — Putin, sort of playing peacemaker and statesman? So, I think there's a lot of calculations there.”

Putin has effectively used the concept of Russkiy mir, or an imagined community of Russian-speaking compatriots, to justify Russia's “protective” actions in places like Ukraine. For Putin, tapping into often problematic historical narratives around the war and the Stalin era have been key to legitimizing his regime at home, and expanding Russia's influence abroad. 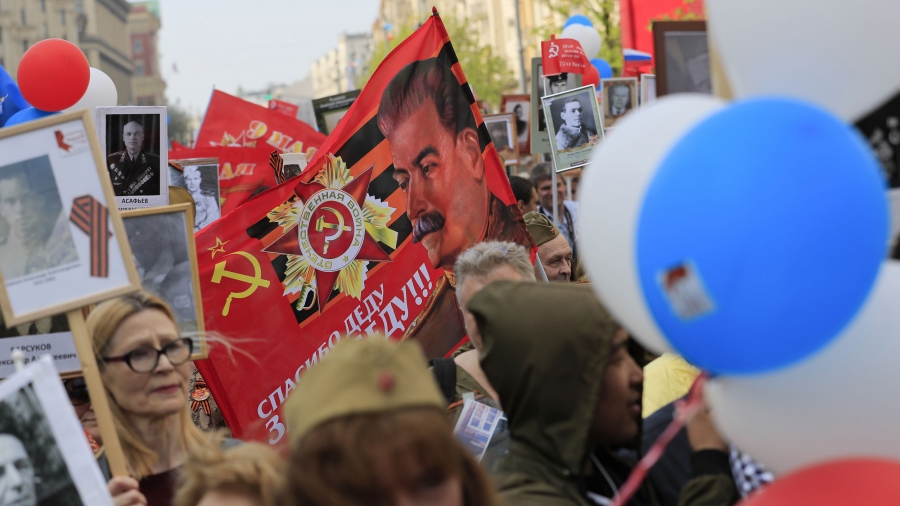 People take part in the Immortal Regiment march, with an image of Soviet leader Josef Stalin seen on a flag, during celebrations of the Victory Day, marking the anniversary of the victory over Nazi Germany in World War II, in central Moscow, May 9, 2019.

Promoting May 9 celebrations are part of the effort to nationalize a broad Russian identity, particularly in the European countries that were once occupied by the Soviet Union and where Russian speakers make up significant parts of the populations. Many ethnic Russians — in Russia and elsewhere — commemorate the sacrifices of veterans and loved ones on May 9. But for victims of Josef Stalin and the USSR, the date is a reminder of decades of brutal Soviet oppression that followed the end of the war. Indeed, much of Europe commemorates the victory over Nazi Germany — V-E Day — on May 8 instead.

But while the politics of history and memory are complex, especially in the bloodlands of World War II, Putin's use of history to prop up his nationalist ideology is concerning and often exacerbates ethnic or ideological cleavages to exert Russian influence.

As Andrei Kolesnikov, a senior fellow for Carnegie Moscow Center argues, “Russia stands out in two respects: first, in its categorical refusal to discuss all uncomfortable historical issues, and secondly in the extremely aggressive tone of its discourse on historical issues, which acts as a kind of political mobilization on contemporary issues.”

Indeed, Russia has gone so far as to pass legislation to criminalize the removal of Soviet war memorials — even in other countries — and denounced the European Union's stance on the Nazi-Soviet pact that laid the groundwork for World War II.

"The falsification of history is a kind of hybrid war," said Latvian President Egils Levits in a joint statement with Estonia and Lithuania ahead of this year's commemoration. Such hybrid warfare also parallels the tactics Russia uses to influence US politics, including the upcoming presidential elections.

"The problem that we face is what all of us refer to as the 'hacking of the minds' ... "

“The problem that we face is what all of us refer to as the 'hacking of the minds,' so of Russia's efforts — and other efforts of adversaries, to be frank — to influence opinion,” said Hill, who testified about Russian interference during the Trump impeachment hearings. “Any disinformation that is created by political parties to favor their own candidate in a domestic environment can also be used by a foreign opponent as a means of discrediting our whole democratic process. So, it's the amplification of our own discord.”

World War II holds some analogies to the pandemic, Hill said.  And its history may hold lessons for rebuilding after the coronavirus.

“The other thing that we have to bear in mind after World War II is that countries banded together to find a way forward out of this. The regret of World War II, of course, was that we ended up almost immediately in a Cold War with the Soviet Union, that the alliance that we'd forged in extremis of the last phases of World War II dissipated fairly quickly once we got beyond 1945," Hill said. "But there is an opportunity here for us all to pull together to get out of the consequences of a pandemic together. We're all in the same predicament.”