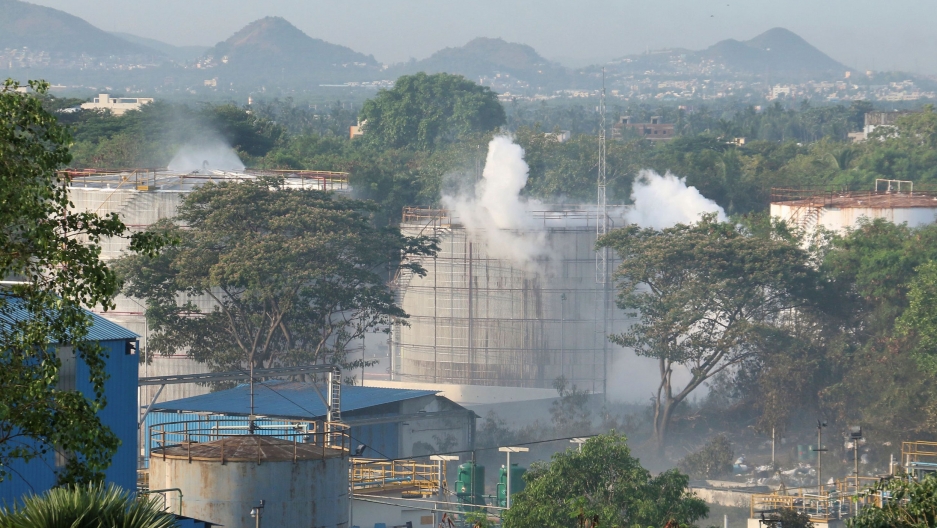 Smoke is seen at LG Polymers plant in Visakhapatnam, India, May 7, 2020.

At least 11 people were killed in India on Thursday and hundreds were made sick after a gas leak at a factory making polystyrene products which also led to the evacuation of villagers living nearby.

The accident occurred some 9 miles inland from the east coast city of Visakhapatnam, in Andhra Pradesh state, at a plant operated by LG Polymers, a unit of South Korea's biggest petrochemical maker, LG Chem Ltd.

The LG Polymers plant makes polystyrene products which are used in manufacturing electric fan blades, cups and cutlery and containers for cosmetic products such as make up.

Srijana Gummalla, commissioner of the Greater Visakhapatnam Municipal Corporation, said gas from styrene, a principal raw materials at the plant, leaked during the early hours of the morning, when families in the surrounding villages were asleep.

Yashwanth Saikumar Ambati, 23, who lives less than 1,000 feet from the plant, said he woke up around 4.30 a.m. because of a strong smell.

"I went back to sleep and I woke up around 6 because the smell got stronger. My eyes were itchy, and I was feeling drowsy, light-headed and slightly breathless," he told Reuters, adding that neighbors also complained of eye irritation and stomach aches.

In a statement issued from Seoul, LG Chem said that the gas emitted in the leak can cause nausea and dizziness when inhaled, adding that it was seeking to ensure casualties received treatment quickly.

Video from Reuters partner ANI filmed later on Thursday showed emergency workers in the area rushing to help victims, some of whom appeared to be listless and disoriented.

A number of victims lay unconscious on the streetside, as volunteers fanned them and others carried them to ambulances.

A spokesman for LG Chem in Seoul said the leak was discovered by a night shift maintenance worker and has been brought under control. 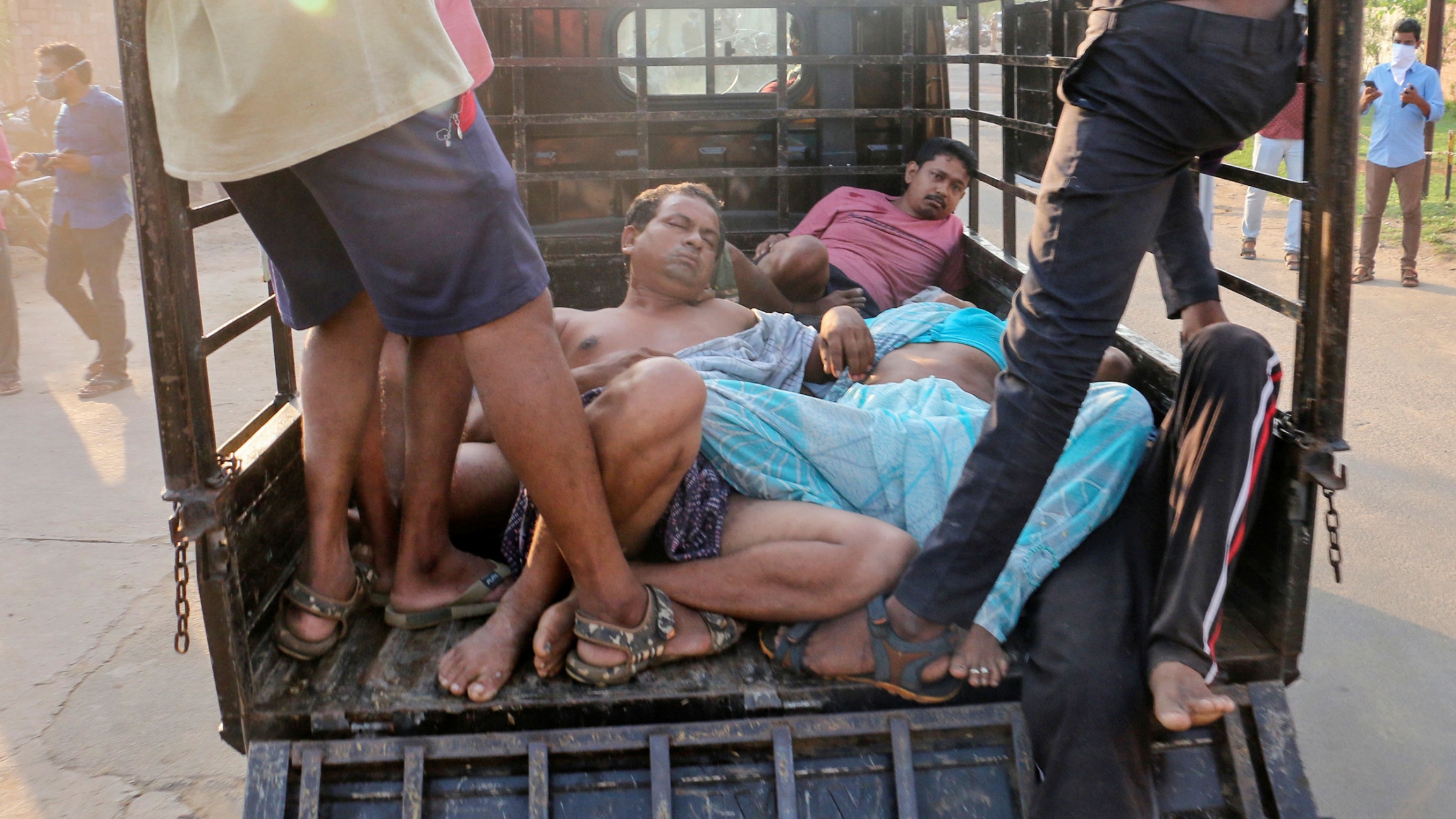 People affected by gas leak at the LG Polymers Plant are transported in a vehicle in Visakhapatnam, India, May 7, 2020.

According to both the company spokesman and Gummalla, the plant was being reopened after India relaxed a nationwide lockdown that had been imposed on March 25 to contain the spread of the new coronavirus.

Thursday's incident brought back bad memories of a gas leak at an factory of US chemical firm Union Carbide that killed thousands in the central Indian city of Bhopal in 1984.

"I pray for everyone's safety and well-being in Visakhapatnam," Prime Minister Narendra Modi said in a tweet.

S.N. Pradhan, director general of the National Disaster Response Force, said that at least 11 had died after around 1,000 people living near the plant were exposed to the gas.

B.V. Rani, a revenue official in the district, said she received a call at around 4 a.m. from a police officer near the facility, who sounded panicky. "He asked me to come to the spot immediately," Rani told Reuters.

When Rani went there, she saw that people had collapsed unconscious in the village adjoining the 60-acre site of the plant.

"I personally helped more than 15 people get to an ambulance who had tried to run away from the village but dropped down within a few meters," she said.

At least one child was among the dead, a policeman at the site told ANI, whose video showed at least two other children being lifted into an ambulance.

Between 300-400 people were hospitalized, Swarupa Rani, an Assistant Commissioner of Police in Visakhapatnam told Reuters. Another 1,500 people had been evacuated, mostly from a neighboring village.

Areas within a nearly 2-mile radius of the plant were evacuated, he said, with emergency services going from door-to-door to find anyone left behind.

Andhra Pradesh Chief Minister Jagan Mohan Reddy said in a televised address that the gas leak occurred because raw material was stored for a long period of time.

The state government will give 10 million rupees ($131,900) compensation to the families to those who died, and it will also form a panel to investigate the cause of the accident, said P.V. Ramesh, a senior aide to the chief minister.

"Obviously something has gone wrong," Ramesh told Reuters. "Nobody will be spared."