Come June 1, Filipa Samarra was supposed to be on a small boat off the coast of southern Iceland with a crew of five, observing and recording wild killer whales.

“Our study has been going for 12 years now,” said Samarra, a marine biologist at the University of Iceland. “It is the longest-running research project on the killer whales here in Iceland, and that really informs a lot of the conservation measures we think of doing for this population.” 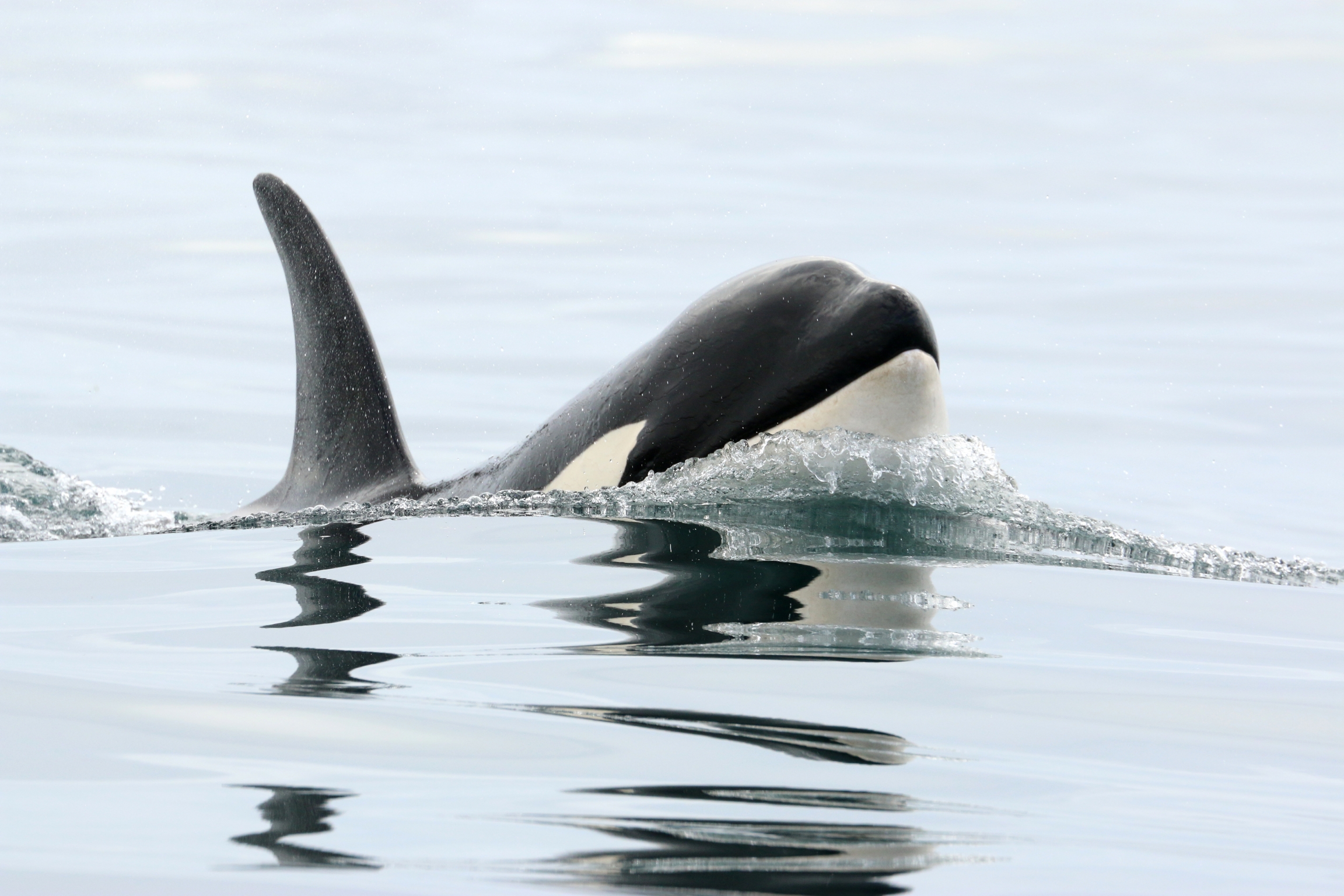 Studying orcas off the coast of Iceland is rough due to the harsh environment. Observations are limited to days when the weather cooperates.

Doing fieldwork in Iceland is rough even in a normal year because the environment is so harsh. “We are already quite limited,” Samarra said, “in the amount of times we can observe the animals because of the bad weather we get here.”

Related: Human touch is essential. How are people coping with ‘skin hunger’?

And now, the coronavirus has upended things further for Samarra and her small team. They may not have a field season at all. And if they do, it will be significantly reduced. This interruption in data collection is a challenge to any field campaign, but it affects people differently.

All over the world, the scientific community is feeling the impact of the coronavirus, both in the field and in the laboratory. In some cases, research has been paused or discontinued. For some, it means changing plans — staying put instead of going abroad, or not being able to return home.

“Students are the most impacted, especially for whom this field season was going to be their first real data collection.”

“Students are the most impacted,” Samarra said, “especially for whom this field season was going to be their first real data collection.”

Students like Anna Selbmann, whose graduate research on the interactions between killer whales and pilot whales was supposed to kick off this summer. Because of travel restrictions, the project has been scrapped.

“What makes me most anxious,” Selbmann said, “is that I won’t be able to do much this summer. And that means I will be very much behind.”

The university will likely grant her an extension, though funding remains a worry. Still, Selbmann is staying pragmatic. “This is something that’s so outside of my control,” she said. “The only thing I can do is to just make the best of it.”

The coronavirus is impacting wild animals in other parts of the world. Marc Ancrenaz co-directs a French nongovernmental organization out of Borneo focused on orangutan conservation.

“Because of COVID-19, for the first time, all of our ground operations have been stopped,” he said. 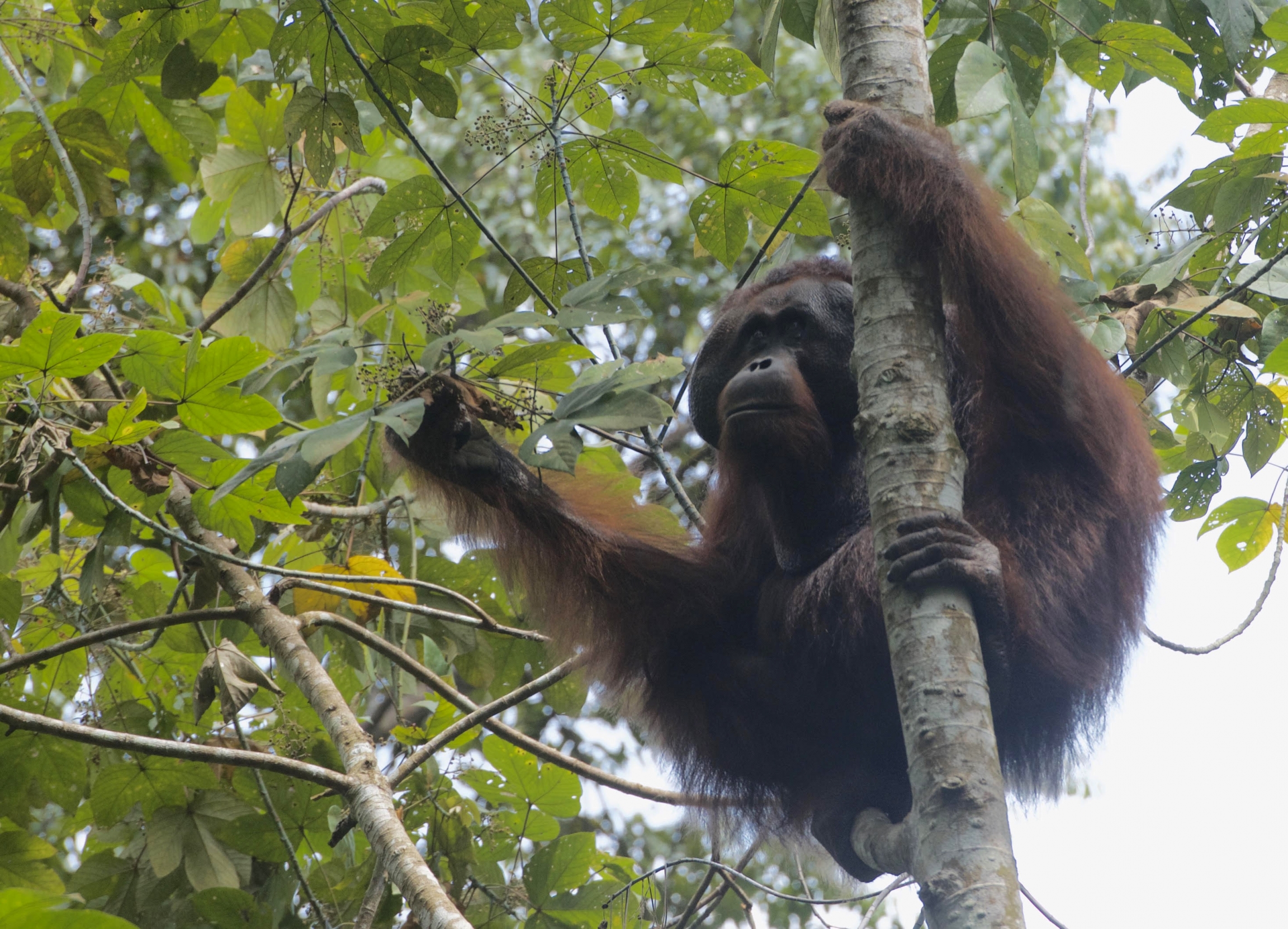 Conservationists worry that people across the tropics who have lost their jobs may poach wildlife for food, accidentally catching threatened animals like the orangutan.

Ancrenaz worries that loss of income and jobs will push people in Borneo and beyond into the forests to poach wildlife for food using snares — indiscriminate ropes used to catch wild boar and deer. But the problem, Ancrneaz said, is “any species can be caught accidentally.”

And that’s bad news for an endangered animals like the orangutan.

Elsewhere, some field projects were already underway and could not be halted as the coronavirus raced around the globe. For example, near the North Pole in the Arctic Ocean, a research icebreaker called the Polarstern is locked in the sea ice about a hundred miles from Greenland. The yearlong expedition on board, called MOSAiC, is studying how the Arctic is reacting to a changing climate and impacting the rest of the world.

A couple hundred international researchers from dozens of disciplines are aboard the Polarstern. At the end of each leg of the expedition, field teams swap out. One such handoff was supposed to take place in late March. But it didn’t happen for Ruzica Dadic, a glaciologist at the Victoria University of Wellington in New Zealand, who was told to stay home because of coronavirus.

“I was supposed to be on the ship at the moment,” she said.

Dadic’s counterpart was to be at sea for three months. Now, it looks like she will be there closer to five. This overlap in expertise has proven essential to keeping the research going.

“This is not just my own project,” Dadic said. “This is our project. So, science is still going to be done. It’s just not going to be done by me. Hopefully, it’s a minimum impact.”

But there will be some effect. All personnel and supply transfers were to have occurred without interfering with research aboard the Polarstern. Due to travel restrictions on other vessels, however, the ship must leave the ice now, interrupting certain data collection efforts for a month.

Researchers are feeling the impact of the pandemic inside their laboratories, too. Saadi Khochbin is a molecular biologist and research director at CNRS, the French National Centre for Scientific Research, near Grenoble. He studies cancer among other things, and estimates his institute had to kill hundreds of lab mice used in research, since many of the animal caretakers are not allowed to report to work. It has meant the suspension of numerous research projects.

“All limitation[s are] frustrating, I think,” he said. “This is a tough decision to know which projects [to] keep as a priority, so we have to change our plans.”

Meanwhile, in the remote pampas of Argentina, the Pierre Auger Observatory, a vast facility that collects cosmic rays to study violent phenomena millions of light-years away, is slowly winking off.

“Our staff cannot go out to the field to do the maintenance of the detectors as required. If the situation goes on like this, what we lose is precious data,” he said.

“Our staff cannot go out to the field to do the maintenance of the detectors as required. If the situation goes on like this, what we lose is precious data,” said Ingo Allekotte, a physicist and project manager at the observatory. 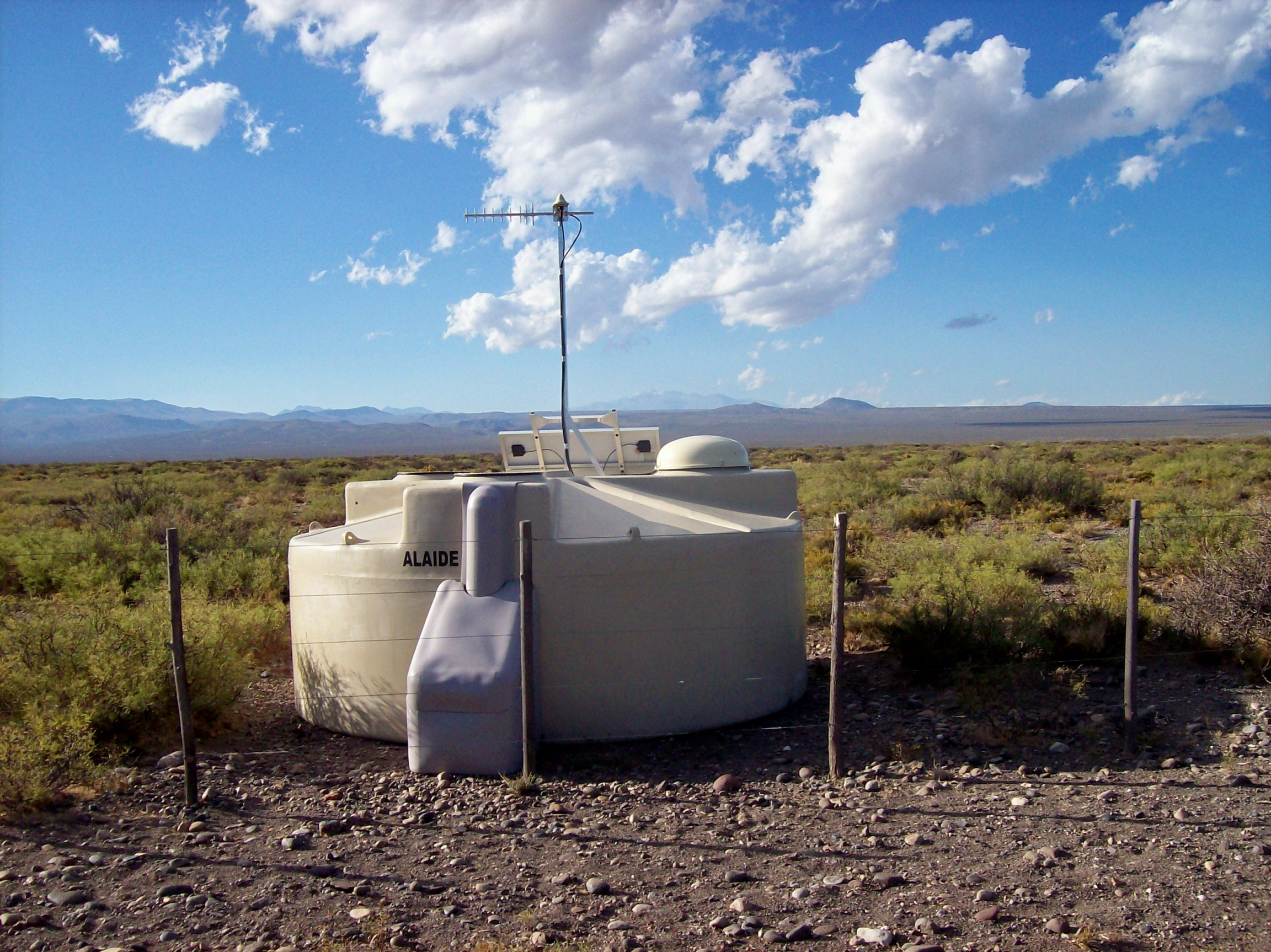 One of many surface detectors that comprise the Pierre Auger Observatory at the foot of the Andes in Argentina. Without proper maintenance, these detectors are slowly winking off, compromising the collection of cosmic rays.

But it is not all bad. Allekotte says an international conference that was to have taken place in Australia went virtual, with great success. Michaela Agapiou, a graduate student at the University of Leeds in England, says it is similar to an international RNA meeting. Now that it has moved completely online and there are no associated travel costs, more people are attending than ever before. 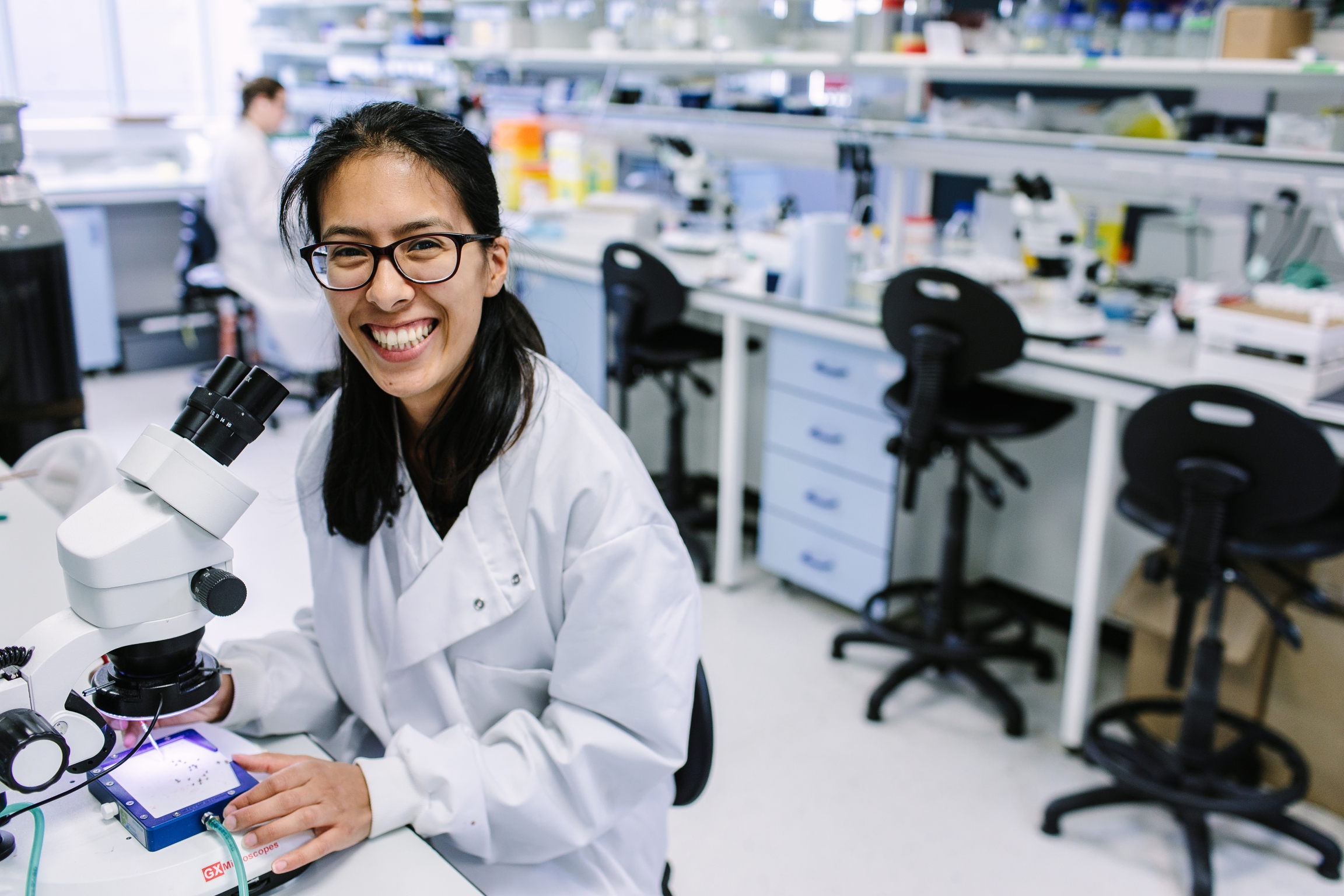 Michaela Agapiou, a graduate student at the University of Leeds in England, explains that an international science conference has attracted more attendees than ever since it went virtual.

And there have been some science success stories, even in the midst of all the delays and interruptions. A year and a half ago, the European Space Agency (ESA) and the Japan Aerospace Exploration Agency (JAXA) launched the BepiColombo spacecraft, which will arrive at Mercury in 2025. A few weeks ago, on Good Friday, it flew past Earth for a gravity assist.

“Every one of these flybys is extremely important because if you get it wrong, you can either slingshot out the spacecraft into oblivion or you can actually break it so that it crashes onto Earth. So, it was a real nail biter.”

“Every one of these flybys is extremely important because if you get it wrong, you can either slingshot out the spacecraft into oblivion or you can actually break it so that it crashes onto Earth. So, it was a real nail-biter,” said Günther Hasinger, ESA’s director of science.

Hasinger says most of the staff members responsible for the flyby were able to do their jobs remotely. But a crucial quorum was required to be on-site in Darmstadt, Germany, working at a safe distance from one another, to get the trajectory just right. The BepiColombo even snapped a selfie with Earth in the background.

“Looking at that from down here in our [COVID-19] situation in all this mess, it gave a sense of unity,” Hasinger said. “We are one planet, one human race, and we are in this together.”

Under normal circumstances, in a packed control room, there would have been applause, embraces and champagne. But the celebration was remote and sedate, as a beacon of human ingenuity sailed by above our heads.