It’s not unusual this time of year to find a lost mitten after the winter snow melts. But it would be unusual to find out that that mitten was worn nearly 2,000 years ago.

That’s the kind of surprise that has been discovered in the icy Lendbreen pass in the mountains of central Norway.

Since 2011, the area has seen unusually warm summers linked to climate change. The melt has revealed an unexpected treasure trove of more than 1,000 remarkably preserved artifacts — including a Viking-era mitten, parts of a sled and a primitive ski. The objects are clues that humans traversed the mountain pass for more than 1,000 years and eventually abandoned it more than 500 years ago.

Lars Pilø, co-director of the Glacier Archaeology Program in Norway, has been collecting artifacts from the Lendbreen ice patch and working to understand what peoples used this ancient mountain pass. Pilø spoke with The World's Marco Werman about his dramatic discoveries in the far reaches of Norway's Jotunheim Mountains. 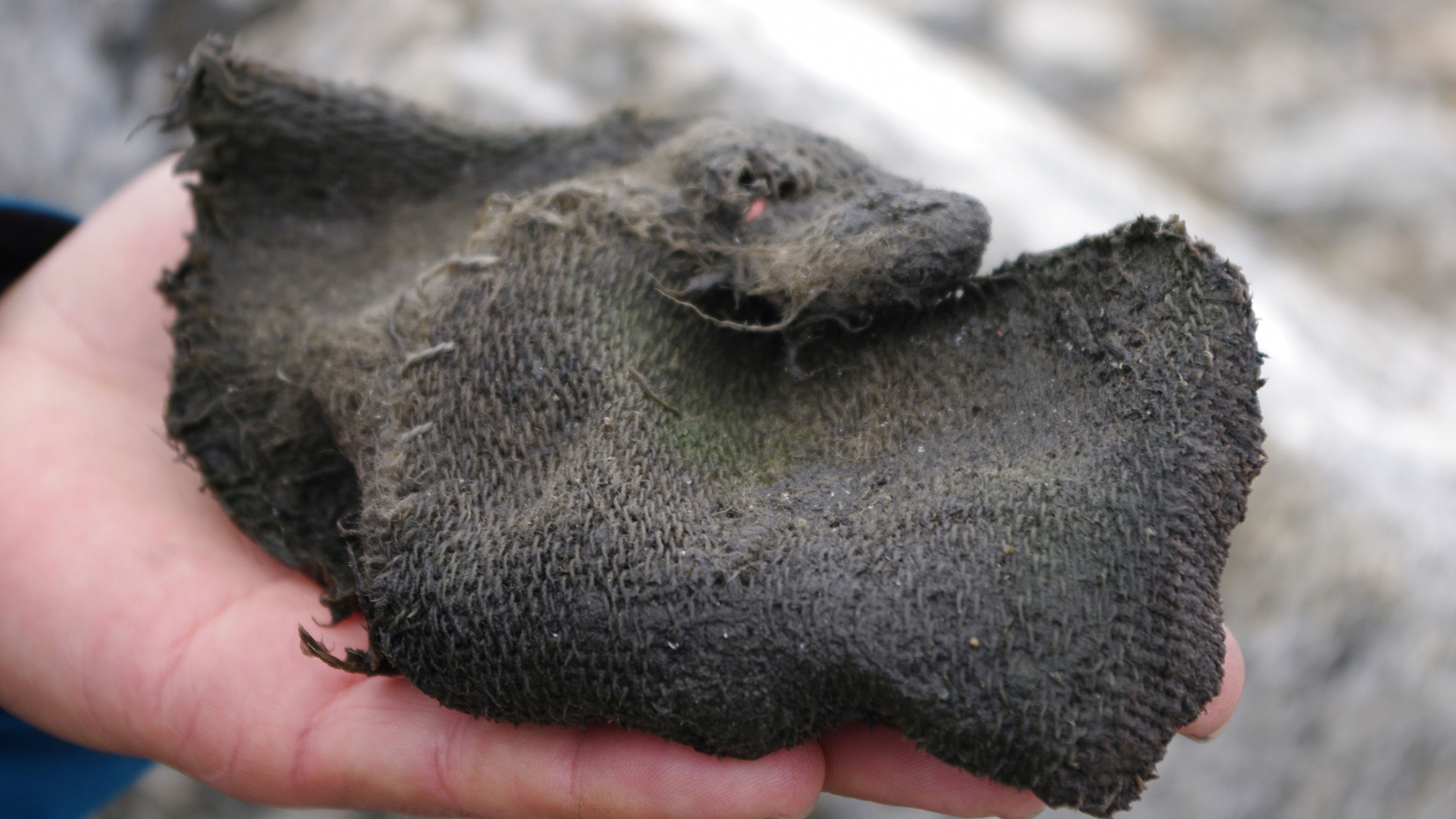 Mitten, made from different pieces of woven fabric. Found in the pass area at Lendbreen. Radiocarbon-dated to the 9th century AD.

Marco Werman: On that first trip up there in 2011, what did you find?

Lars Pilø: Well, we worked our way around systematically, and when we got to the top, we found a huge piece of cloth, which we didn't know what [it] was, but it looked really old. And that later turned out to be an Iron Age tunic, which was 1,700 years old. And then all the strange finds at the top there — so, me and a teammate went ahead to check it out. And that was when we discovered the mountain pass melting out of the ice.

"That was the greatest moment in my archeological career."

What was that like for you, discovering those things that first trip up there?

That was the greatest moment in my archeological career. You know, we went into this depression. It was foggy. We couldn't really see anything. And we found a huge object which looked like a giant slingshot, which was, in fact, part of a sled. We didn't know that at the time. And then the fog sort of lifted. We could see the terrain was littered with artifacts and horse dung. 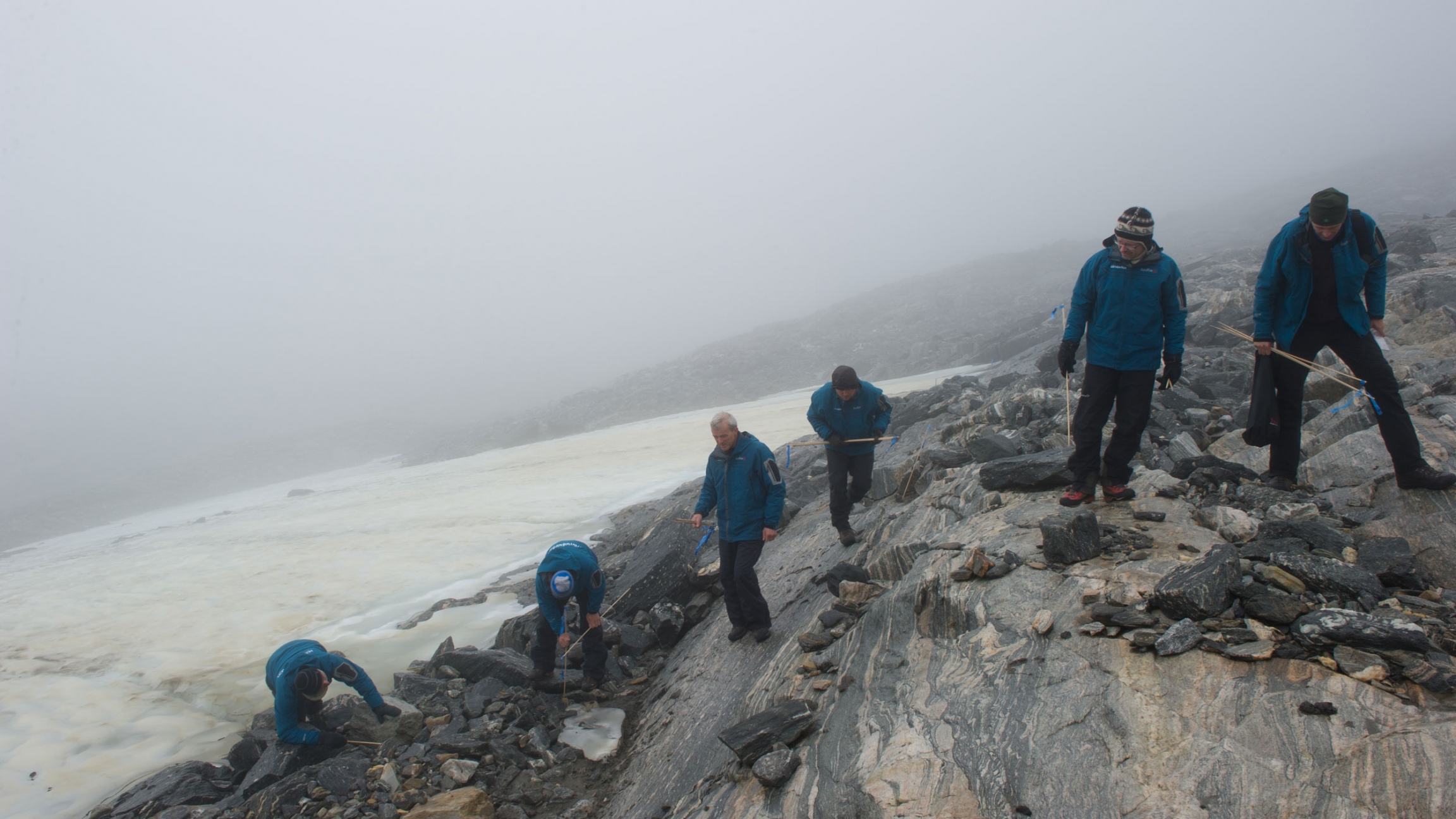 Systematic survey along the edge of the melting ice in the pass area at Lendbreen.

Wow. I mean, it's just dramatic, though, what you found in that depression. More than a thousand artifacts, leather shoes, pieces of sleds, horseshoes. As an archaeologist, what do these artifacts tell you?

Well, they can tell us a lot. First of all, they reveal that there was actually a pass going through there. Then we can use radiocarbon dating, so we get a glimpse of when it was used, what time period — and also when the use most intense.

Yes. So what is the broad timeline of when this mountain pass was used, and who was traveling through it?

Well, we can see that the pass was used from around 1,700 years ago, and then its use peaked around 1,000 years ago at the end of the Viking Age. And then it declines through the remaining part of the Middle Ages, probably due to a combination of changes in the trade networks there, the Black Death, and more pandemics. 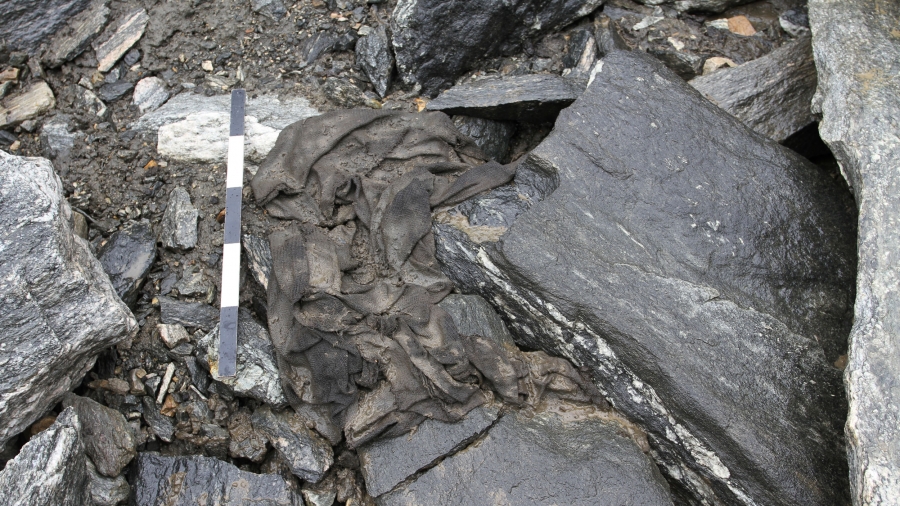 The tunic as it was found, crumpled up and lying in a depression in the scree. Radiocarbon-dated to c. AD 300. Scale is 50 cm.

That's an interesting story, especially now with COVID-19. Can you explain the theory around that?

We know with the Black Death that about half, maybe two-thirds, of the Norwegian population died. This [affected] not only Norway, of course. It was the entirety of Europe. And that, of course, caused disruption to trade networks, and also the surplus that the local population could produce that could help them trade — that was no longer there.

What sort of climate can you assume existed at the time that it was active as a mountain pass for Vikings?

Well, normally we hear about mountain passes getting closed to due to glacier advances. So people can't access the passes anymore. But in fact, Lendbreen worked a bit different, because this is not a glacier with crevasses that people can fall into. It's a large ice patch, which is a more stationary ice body. So people would use this area when there was a lot of snow. Because at this altitude, up to 2,000 meters, the terrain is quite rough, and you can't really go through here with your animals and your pack horses if it's not snow-covered. So they would basically use it when there was a lot of snow. 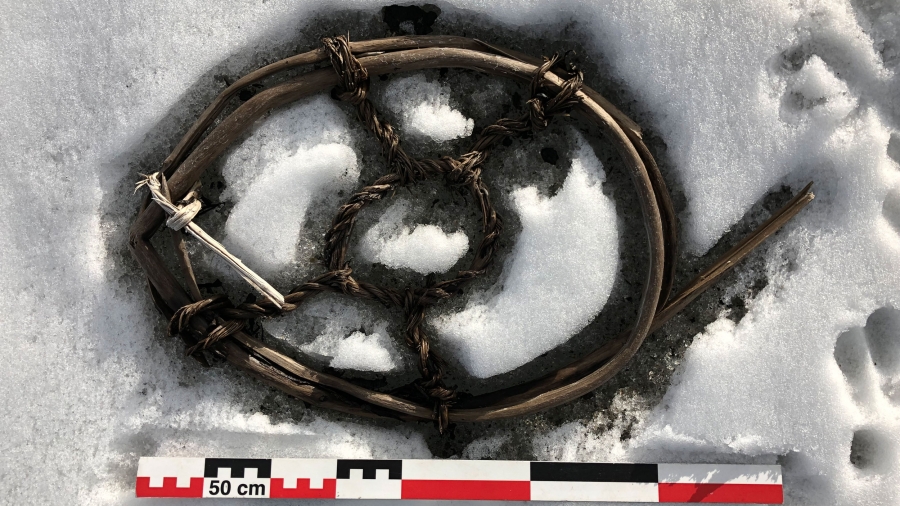 Snowshoe for a horse, found during 2019 fieldwork at Lendbreen. Not yet radiocarbon-dated.

This is kind of a poignant discovery. Global warming revealed all these artifacts, but it's also your worst enemy. Won't the warmer air destroy any artifacts that are not now removed from the pass? Is this a race against time for you?

Yes, it is. The strange thing is that the ice works like a kind of a time machine. It preserves the artifacts in a pristine condition. But the moment they get out of the ice and end up on the ground in front of the ice, the clock starts ticking really quickly. So we need to be there to collect the artifacts when they come out. Otherwise, they deteriorate and will be lost pretty quickly. 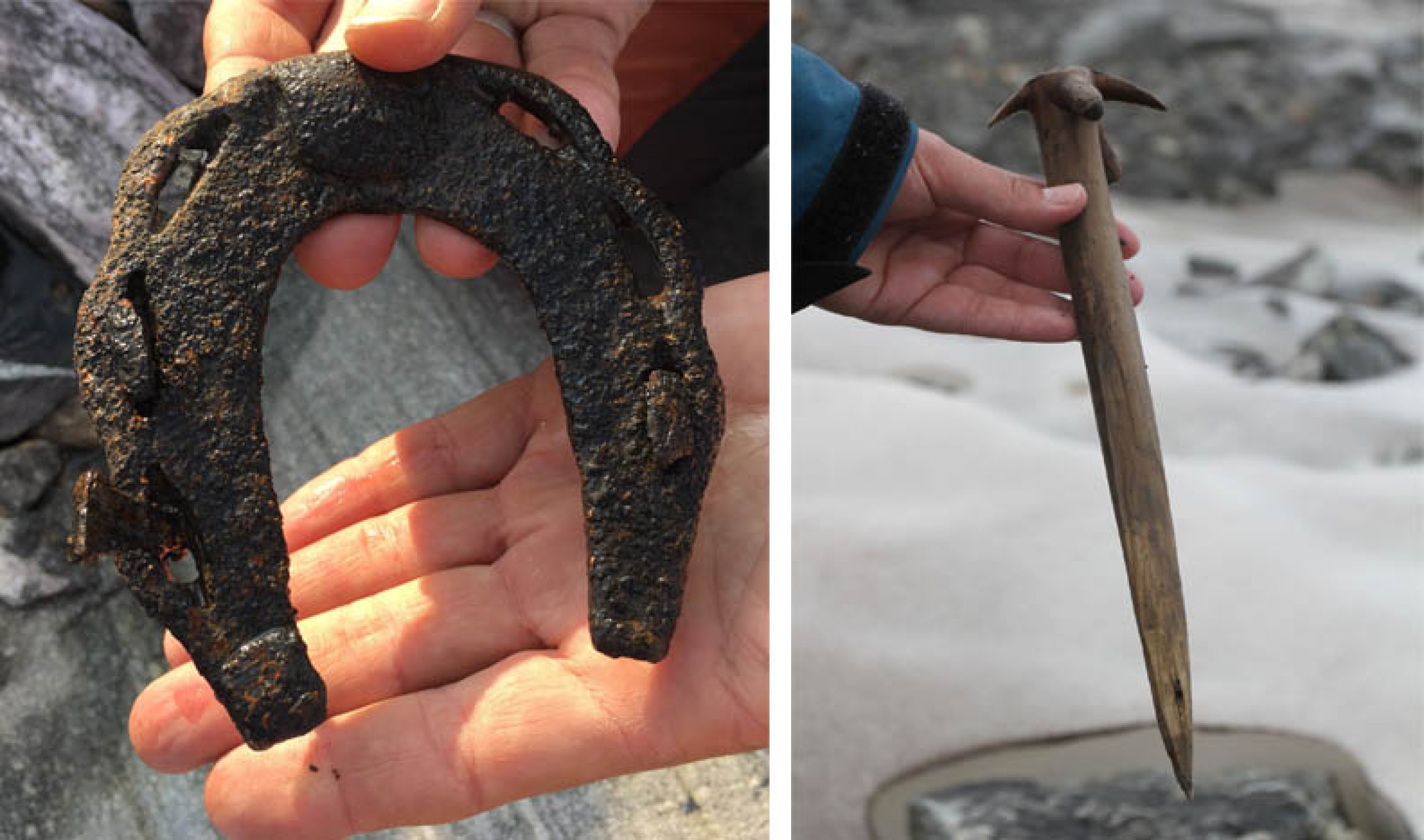 Left: A beautifully preserved horseshoe which melted out of the ice in the lower part of Lendbreen in 2018. The shape dates it to the 11th to the mid-13th Century AD. A small part of the hoof was still attached to the other side of the shoe. Right: Whisk made from pine (held upside down). Found in the pass area at Lendbreen. Radiocarbon-dated to c. AD 1100. Such whisks are still made today, but they are usually not pointed, so this artifact may have been used secondarily for another purpose, perhaps as a tent peg.

How many trips have you now made to the Lendbreen pass? Are you finding objects now that are in their entirety or just pieces of things?

No. We find complete things as well. But some things are broken, and that's probably why they were dumped there when people went through the pass. They broke and people just left them. So we've been up there about 10 times since then for extended periods. One week to 10 days. We live in a base camp up there, and it's a large area to survey. But this year, we probably [were] there for the last time for the pass, because to the last remaining ice melted out.

And where will these antiquities end up in a museum at some point?

Yes, they are at the Museum of Cultural History in Oslo, which is our program partner for this project. They have the responsibility of curating the objects. Many of the objects from Lendbreen are exhibited at the local museum in Lom.