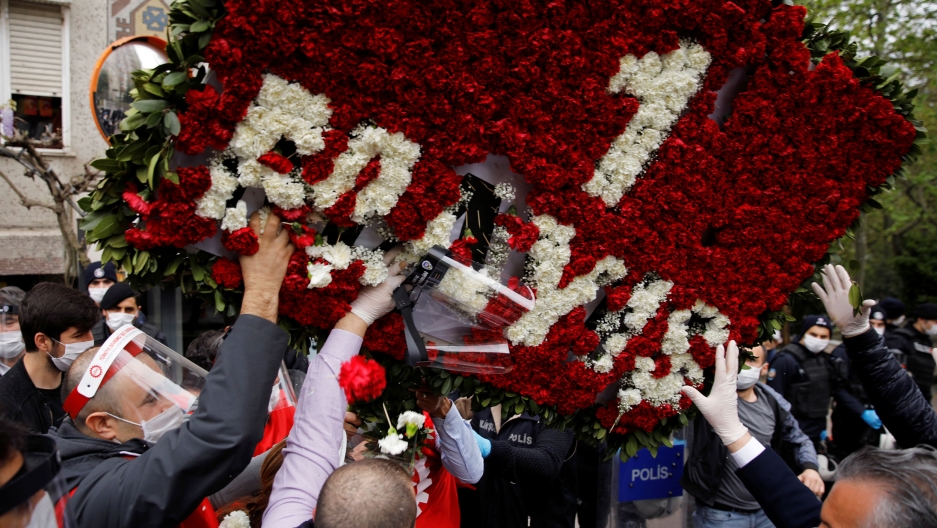 Trade union leaders carry a wreath of flowers as they attempt to defy a ban and march on Taksim Square to celebrate May Day, during a three-day curfew amid the spread of the coronavirus disease (COVID-19), in Istanbul, Turkey, May 1, 2020.

May 1 is International Workers' Day, and while rallies and celebrations around the world have been curtailed due to the novel coronavirus outbreak, the pandemic is starkly bringing to light many of the inequities workers face.

Police in Istanbul, Turkey, detained trade and union leaders who attempted to stage a protest at the symbolic Taksim Square, where 34 people were killed during a May Day event in 1977. In South and Southeast Asia, millions of garment workers have lost their jobs, while others are being pushed back into production without the proper safety measures in place.

Essential workers from some of the US's largest corporations — including Amazon, Instacart, Walmart, Target and FedEx — are striking to demand workers' benefits such as hazard pay, sick leave and protective equipment. Many front-line workers say they feel exposed, and that employers have put profits over their health and safety during the pandemic.

History: The bloody story of how May Day became a holiday for workers

The death of a tribesman in northwest Saudi Arabia has raised alarms about the government's plans to forcibly remove locals from their land in order to build a $500 billion futuristic city called NEOM.

Saudi Arabia announced plans for the megacity back in 2017. This region is home to the Huwaitat tribe, who have occupied these areas for hundreds of years and claim to be descendants of Prophet Muhammad. Now, they are being forced to evacuate.

And: US report slams Saudi Arabia for beoutQ-related piracy acts

Every day before dawn in Caracas, essential workers such as doctors line up for hours at the few gas stations that still have fuel. The OPEC nation with the world’s largest oil reserves is short on gas because its refineries have collapsed. Rising petrol shortages is making Venezuelans' lives tougher. When the pandemic struck, Venezuela was already suffering from hyperinflation and a battered health system. Now, the government has reinstated strict economic controls — for example, setting the price of eggs at more than a month's wages. Critics of President Nicolás Maduro blame the collapse on government corruption and mismanagement. The government blames US sanctions.

And: Iran is hauling gold bars out of Venezuela's almost-empty vaults

What Germany’s energy revolution can teach the US

Twenty years ago, Germany embarked on an ambitious program to transform the way it produced electric power. It became a model for countries around the world, showing how renewable energy could replace fossil fuels in a way that drew wide public buy-in by passing on the benefits — and much of the control — to local communities. Now, the steps Germany took on this journey, and the missteps it made along the way, provide critical lessons for other countries seeking to fight climate change.

And: Clean energy could get Americans back to work post-pandemic

Lebanon has suffered six months of protests and is teetering on the edge of an economic collapse. Those protests have been mostly quiet during the lockdown, but now they have returned as prices are rising quickly and many Lebanese fall below the poverty line.

Still, some Americans are looking at the US response to COVID-19 and say they feel safer in Lebanon than back home.

Also: You think we care about masks?': Anger and poverty grip Lebanese city

A new report from the City University of New York's Center for Community Media argues that immigrant-focused news outlets such as Punjabi Radio USA are vital and need to be supported. For some, they’re the only trusted sources of information on specific problems facing some immigrant groups.

And in Panama, some 2,000 migrants — many of them children under age 5 — have been detained for months in the Darién Gap, near the rainforest separating South and Central America. 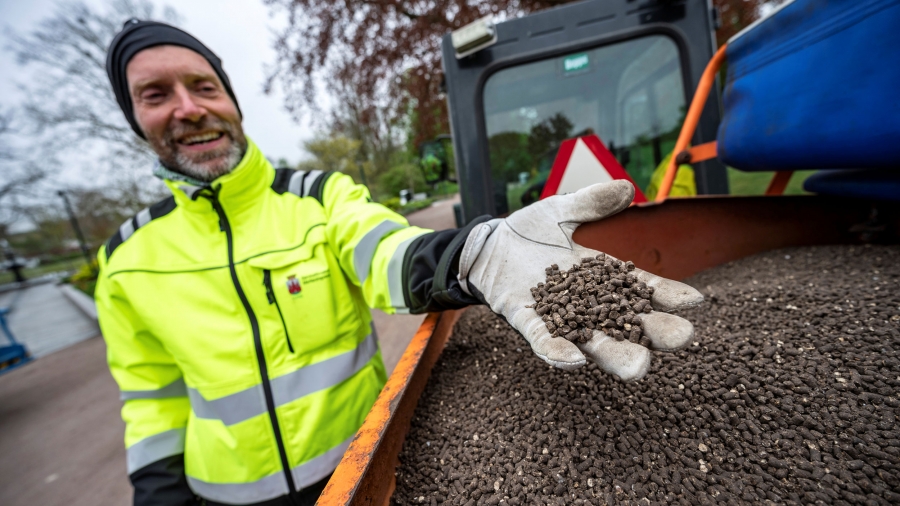 Garden worker Robert Nilsson shows chicken manure with which he fertilizes lawns in Stadsparken in an attempt to prevent residents from gathering for the traditional celebrations to mark the Walpurgis Night amid the spread of the coronavirus disease (COVID-19), in Lund, Sweden April 30, 2020.

A town in southern Sweden has turned to an unusual source to prevent the coronavirus spreading during an annual festive event: chicken manure.

The university town of Lund began spreading chicken droppings in its central park to put off would-be revellers who would usually come on April 30 to celebrate Walpurgis Night. Talk about party poopers.

One Canadian music teacher has really captured the feeling of working from home. 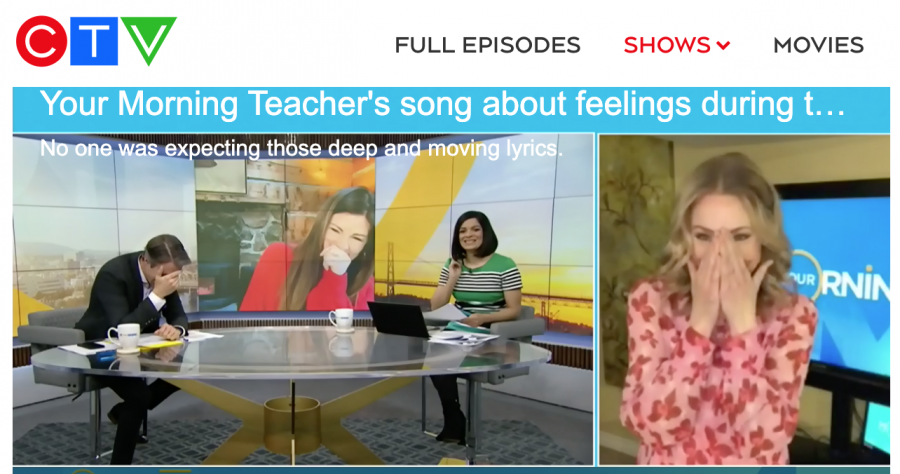 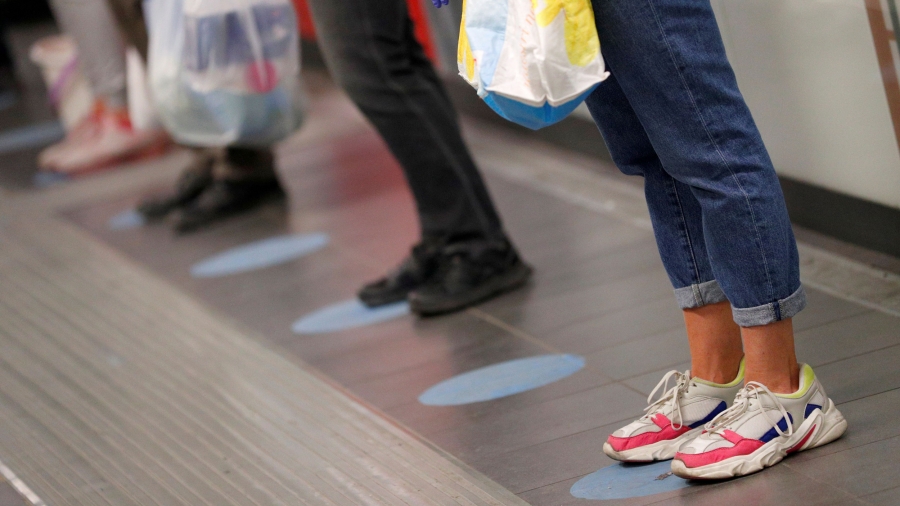 People stand on social distancing signs at the San Giovanni subway station as the spread of the coronavirus continues, in Rome, Italy, April 28, 2020.

Social distancing measures have been effective at countering the coronavirus pandemic, but have paralyzed global vaccination efforts. Already millions of children have become vulnerable to polio, measles, yellow fever and other killers. And, the death of a tribesman in northwest Saudi Arabia has raised alarms about the government's plans to forcibly remove locals from their land in order to build a $500 billion futuristic city. Also, when the NHL postponed its season in early March, hockey fans were left in the lurch. That didn’t stop a family in Ontario, Canada, who decided to create their own end to the NHL season — from their basement.