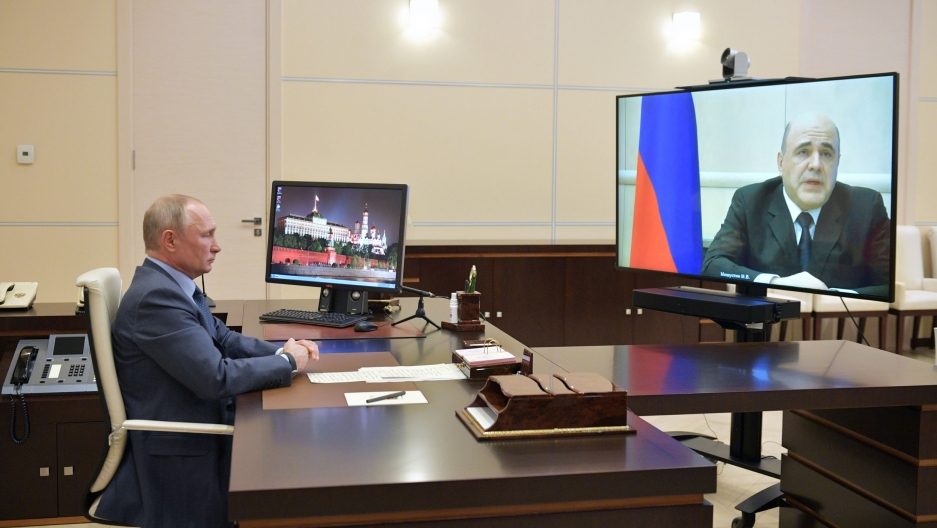 Russian President Vladimir Putin listens to Prime Minister Mikhail Mishustin during their meeting via a video link at the Novo-Ogaryovo state residence outside Moscow, Russia April 30, 2020.

Russia on Friday reported a record daily rise in the number of confirmed cases of the coronavirus a day after Prime Minister Mikhail Mishustin announced he had been diagnosed with COVID-19, the disease caused by the virus, and was temporarily stepping down to recover.

The nationwide case tally rose by 7,933 cases and now stood at 114,431, according to Russia's coronavirus crisis response center. It said 96 people diagnosed with COVID-19 had died in the last 24 hours. That raised the official overall death toll up to 1,169.

Mishustin told President Vladimir Putin on Thursday about his diagnosis and said he would self-isolate. First Deputy Prime Minister Andrei Belousov will serve as acting prime minister in his absence.

Mishustin, who had been one of the main coordinators of Russia's response to the coronavirus, is the first high-ranking Russian official to go public with a COVID-19 diagnosis.

Mishustin said he would remain in contact with members of the government and Putin by phone and videoconferencing despite his condition.

"What is happening to you can happen to anyone," Putin replied matter-of-factly. "When you get to the hospital, call me. I'll be waiting for your call."

Russia's outbreak got off to a slower start than many other countries. But cases began to sharply rise last month, and on Thursday, surged past the 100,000 mark.

Although Russia is rising up the table of nations with the highest number of confirmed cases, it has so far recorded far fewer deaths than many of the hardest-hit countries.

Putin has warned the peak of the outbreak has yet to come, and the authorities have said there could be a new spike in cases if the population flouts lockdown measures during long public holidays in early May.

The world's largest country by territory, Russia has been on lockdown since Putin announced the closure of most public spaces in late March to limit the scope for the virus to spread.

Putin and the Cabinet have been holding remote meetings to avoid contact.

Political scientist Ekaterina Schulmann spoke with The Wold's Marco Werman from Moscow about Mishustin's diagnosis and the Kremlin's response to the coronavirus pandemic.

Marco Werman: Ekaterina, let's first talk about the public health impact of this news of Prime Minister Mishustin testing positive for COVID-19. How will it affect Russia's response to the coronavirus?

Ekaterina Schulmann: Well, the perception, I suspect, would be that if such a serious person as a prime minister is ill, then the whole thing is serious, indeed. As for the administrative, bureaucratic side of the whole thing, if this does not translate into a permanent change of prime minister, then it will not have, I think, very serious influence on the way the government works.

Well, to get to how seriously the Kremlin is currently taking the pandemic, how are some of the big coronavirus policy decisions being made in Russia? Is it clear to you who President Putin is consulting with?

There's a shtab — a kind of headquarters to fight against the epidemic — and this one was headed by the prime minister. Then, of course, there's the president and there are governors on whom it looks like real responsibility rests, because different measures are implemented in different regions of Russia, which is quite rational. Russia is a large country, let me tell you that as an expert, and regions vary greatly in their size and their population, in their resources, in the state of their health care system.

So, right now, formally, Putin has not declared a state of emergency over the coronavirus. Why is that?

The most realistic answer is that both the state of emergency and the situation of emergency imply compensations from the state to the citizens and businesses affected by the measures taken against this emergency. So, to put it quite simply, I do suspect that the avoidance is due to the desire or the lack of desire to pay.

Related: How do you stop the spread of misinformation?

So, Ekaterina, there are some government officials that are saying off the record that Mishustin will not return to his post as prime minister. Is there any validity to these reports?

Let us not comment on gossip. There is no reason to suppose that this is some kind of plot.

Finally, just in terms of optics, here in the US, President Donald Trump hosts these marathon press conferences that are broadcast and seen by millions of Americans — briefings that, as you may know, have really polarized this country. In Russia, Putin presides over videoconferences with Russia's governors and other officials — they're broadcast nationally, that's kind of the image that Russian citizens are seeing. How does Putin want to be seen in those moments, and how is he actually coming across?

One of the goals of supreme power is to fight against panic. So, the work of the leader is to project this kind of calming image, the "everything-is-under-control" impression needs to be produced. This has been the aim. Whether this aim has been achieved is another question. We can judge by the polling data that has been published recently. Both the ratings of trust and the ratings of approval of the president, to put it mildly, have not risen with the epidemic. Russia is, I think, the only country that has not experienced the rallying-around-the-flag effect.

I mean, briefly, why do you think it didn't take hold in Russia?

Evidently, the tendency of lower trust towards every political institution that we have seen since at least the beginning of 2018, has been too strong to be influenced by any external event, even the event of such magnitude as the pandemic.