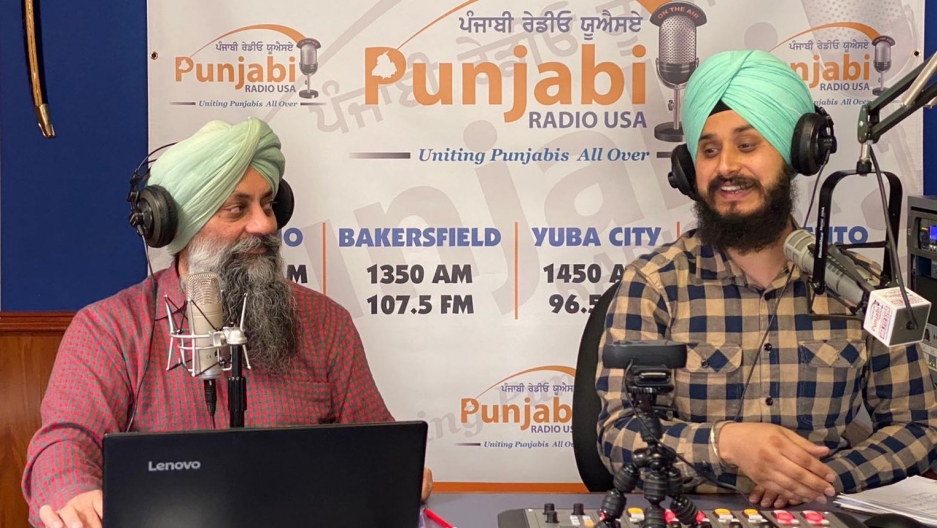 Truckers have a lot of time. At first, listening to Punjabi Radio USA was just something to break up the silence for Sunny Grewal. His family is from India, and his dad got him into the Punjabi-language station about eight years ago, soon after it started.

“He was always listening, because my dad, he basically speaks our native language, the Punjabi language,” said Grewal, who has a refrigerated truck and hauls dairy, fruits and vegetables.

Now, the station has become a lifeline for Grewal, and thousands of other Punjabi-speaking truck drivers in the US. In some areas of California, they can hear Punjabi Radio USA on the radio. In other places, truckers stream it or call a number to listen. There’s a whole show about trucking, where people can call in and ask experts questions. After the coronavirus hit, truckers started reporting problems with the rest stops they rely on for bathrooms and food.

“So, there were a lot of people calling in and telling them, like, ‘This company, [doesn’t] let us use the restroom. They don't even let us go inside.’”

“So, there were a lot of people calling in and telling them, like, ‘This company [doesn’t] let us use the restroom,’” Grewal said. “‘They don't even let us go inside.’”

“So, we became a platform for them so that they can tell the issues,” said Rajkaranbir Singh, one of the two main hosts of California-based Punjabi Radio USA. He’s also brought on doctors, lawyers and other experts to tell people about all the aspects of the pandemic.

“So, it became more intense. It took more of our time, although we got financially hit with the coronavirus.”

That’s a problem for many mainstream media companies right now — but a new report from the City University of New York's Center for Community Media argues that news outlets like Punjabi Radio USA are vital and need to be supported because they’re the only trusted sources of information on specific problems facing some immigrant groups.

Gerson calls media organizations like Punjabi Radio USA “digital first responders.” She said many have been hit hard. For example, the Nguoi Viet Daily News, the largest Vietnamese newspaper in the US, has cut staff. Another one is Jambalaya News, out of New Orleans.

“The women behind that news outlet, which is the only Spanish-language source for that community, are not paying themselves right now,” Gerson said.

Punjabi Radio USA plans to keep going despite the financial situation, according to Singh.

“The information [that] we are giving, nobody else is,” he said. “So, not everybody is doing what we are doing for our community right now.”

Grewal is counting on that information to help navigate the current economy, which has been really hard on people like him who own their own trucks. They’re getting paid a lot less to haul freight, even though farmers have produce that needs to be shipped across the country.

“We are like basically not even surviving right now. The rates they are offering, we can't even survive.”

“We are like basically not even surviving right now,” he said. “The rates they are offering, we can't even survive.”

Related: How do you stop the spread of misinformation?

Grewal said now it costs him more to run his truck than he earns taking a job. So, for now, he’s parked it in Buffalo, New York, where he lives. He still dials into Punjabi Radio USA, hoping the hosts explain how truckers can manage their loan payments during this crisis.

“They figure it out. They find out. Then they tell everybody on the radio there,” Grewal said. “That's when I find out. Then I can call my lenders and try to skip [a] couple payments or, you know, defer the payment or something.”