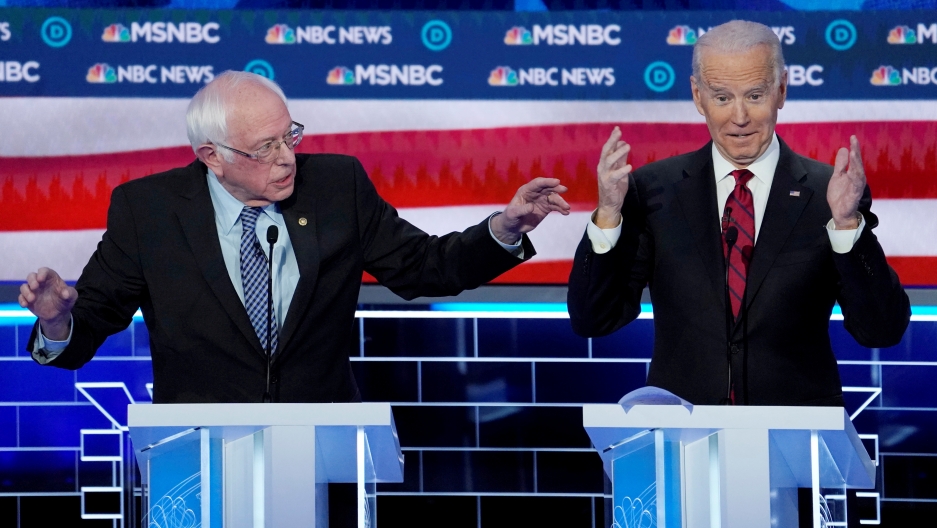 She had spent months campaigning for the then-Democratic presidential candidate in her spare time — outside of her job running an English-Spanish interpretation and translation services company. It was the first time Marcano-Kelly, 35, got involved in a presidential campaign, and this November will be the first time she is eligible to vote after becoming a US citizen last year.

Marcano-Kelly, a resident of Iowa, called that rally — her first time meeting Sanders — an “amazing opportunity.” And she said her home state was an exciting place for a first-time voter: “You get to meet everyone, and everybody's courting your vote directly.”

Sanders had been a hugely popular candidate among young people and Latinos — two groups that are slated to be important voting blocs this fall. Still, he lost the Iowa caucuses in March despite garnering the enthusiastic support of young Latinos like Marcano-Kelly. After losing several primaries, Sanders withdrew from the race on April 8.

Sanders’ announcement has left many of his Latino supporters reeling. Recent polls by Latino Decisions and other groups suggest Latino voters are not confident Biden is the right person for the job — at least, not yet.

“Since then, I’ve been going through sadness and just questioning everything,” Marcano-Kelly said of Sanders’ decision to drop out of the race.

“Today, I am asking all Americans, I’m asking every Democrat, I'm asking every independent, I'm asking a lot of Republicans, to come together in this campaign to support your candidacy, which I endorse,” Sanders said to Biden during a livestream in early April.

Marcano-Kelly said she is torn about her vote and is now asking her undocumented immigrant friends for advice.

“They tell me like, absolutely vote for Biden, no question about it. But many of them are saying, 'You know what, it's not gonna be any different'.”

“They tell me absolutely, vote for Biden, no question about it,” she said. “But many of them are saying, 'You know what, it's not going to be any different.'”

Many are waiting closer to Election Day to make a decision, says Stephen Nuño, communications director and senior analyst with Latino Decisions. The polling firm just released a nationwide survey looking at the impact of COVID-19 on Latino communities.

The poll looked at several states with high Latino populations — including Nevada, California, New York, New Jersey, Florida and Texas. In February, 73% of eligible Latino voters said that they were almost certain they were going to vote in the presidential election. But over the last two months that figure has dropped to 60%.

“And this is what the poll is saying — if you're not actively going out there, don't expect Latinos to come to the polling booths in November,” Nuño said.

Biden will have to do more to court that vote, Nuño said. But Biden already faces criticism for being too conservative with his policies — especially on immigration. Advocates say his association with the Obama administration and its nearly 800,000 deportations could disenchant Latino voters.

Still, Biden has pledged to undo President Donald Trump’s immigration bans and fix the country’s asylum-seeking process, among other things. He unveiled his immigration plan in December.

But it took too long for Biden to become bolder on immigration, said Cristina Jiménez, co-founder of United We Dream. The organization helped push for the protection of young, undocumented immigrants through Deferred Action for Childhood Arrivals, or DACA, under the Obama administration.

Even with DACA in place, advocates say they never saw a change in the approach to detention and deportation, Jiménez said.

“Vice President Biden didn't even recognize at the beginning of the primary season, the impact of these deportations and didn't acknowledge the harm that communities experienced under the Obama administration,” she said.

Jiménez said Biden needs to make immigrant families feel heard: “There is a big question in the Latino community, 'Why should we trust you?'"

It’s not just immigration, Nuño said. Young Latino voters are concerned about access to education and health care, as well as a livable wage — everything the coronavirus pandemic makes urgent.

That urgency is moving some Latino advocacy groups to endorse Biden early in the campaign. That includes Voto Latino, which focuses on voter registrations. Biden is the group’s first-ever political endorsement.

María Teresa Kumar, Voto Latino’s president, said it wasn’t an easy choice. Before their endorsement, her organization wrote to the Biden campaign outlining their expectations in a two-page letter. His campaign responded with a 22-page plan tackling issues like immigration and college affordability.

“[These are] items that we oftentimes forget, but are the crux of what makes Latinos pay attention to politics and what Bernie was talking about, quite frankly,” she said.

This endorsement might encourage others who were passionate supporters for Sanders and other candidates such as Massachusetts Sen. Elizabeth Warren, and who now feel adrift, Kumar said.

Jiménez will vote for the first time this year. Now 36, she came to the country as a 13-year-old from Ecuador and has dedicated her life's work to immigrants' rights.

“As someone who could not vote until recently, I grew up undocumented and I just became a citizen last year, I take the power of my right to vote very seriously," she said.

Jiménez said Biden was not her first choice; Warren was. But she’s looking past that now. The consequences of a second Trump term are too high — for her and her family members who are not yet citizens.