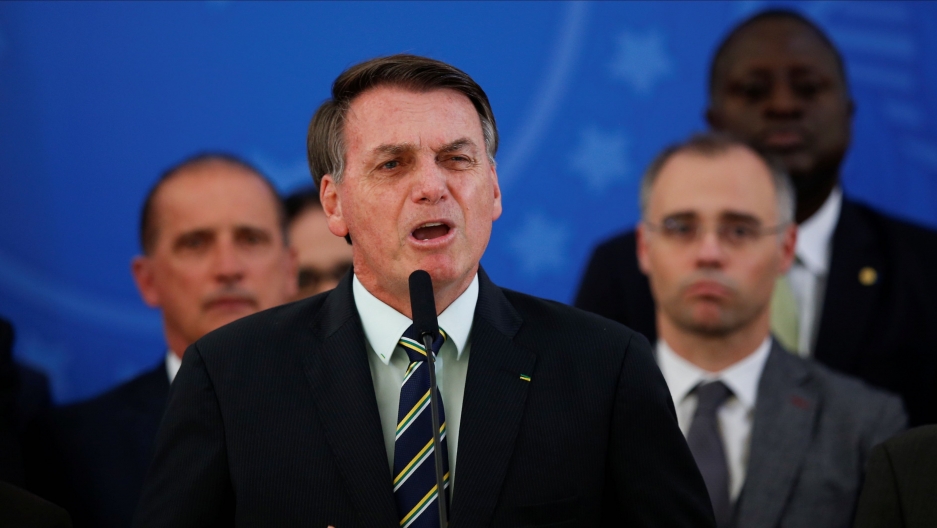 Brazil's President Jair Bolsonaro reacts while addressing the media during a news conference at the Planalto Palace in Brasília, Brazil, April 24, 2020.

On Tuesday night, Brazilian President Jair Bolsonaro met with reporters in Brasília. The country had surpassed China in the total number of deaths from the coronavirus and had just registered its highest death count in a 24-hour period: 474 people.

“So what? I'm sorry, what do you want me to do about it?” Bolsonaro said Tuesday.

His statement went viral, as did the response. Brazilians took to social media to attack the already embattled president.

1/ “So what?” Jair Bolsonaro told reporters when asked about the record 474 deaths that day in Brazil. “I’m sorry. What do you want me to do?”
"E daí" https://t.co/cymzTkiVCi pic.twitter.com/hNXcoJIy4O

Brazil: 5k dead. 500 in 24 hours.
70k confirmed cases. Some state health systems already collapsing.
Bolsonaro responds: "So what? I'm sorry. What do you want me to do? I'm a Messiah (Messias is one of his surnames), but I don't do miracles."...

Bolsonaro has fought hard against social restrictions in response to the coronavirus, attending rallies and demanding the economy be reopened. Two weeks ago, he forced out his health minister for vocally defending quarantine measures.

Brazilian President Bolsonaro greeted a few dozen supporters protesting quarantines in Brasilia today. He told them that 70% of the country was going to get sick sooner or later so everyone should just get back to work. #coronavirus #covid19 #Brazil pic.twitter.com/mMmfZR5Rsj

This is only the latest as Bolsonaro wades through the worst political crisis of his administration — and the calls from Bolsonaro’s supporters for a return to military rule don’t help.

On Monday, the Supreme Court ordered an inquiry into Bolsonaro’s alleged interference with police investigations for political gain. This case against him stems from allegations made by Bolsonaro’s former star Justice Minister Sérgio Moro’s resignation, who stepped down after the president fired federal police chief Maurício Valeixo.

It’s widely held that Bolsonaro’s sudden interest in the federal police stems from his hope to block criminal inquiries into his three sons, who are under investigation for a series of crimes, including running a fake news scheme, money laundering and embezzlement.

According to the Supreme Court documents, there are seven accusations against the president, including malfeasance and obstruction of justice. The federal police now have 60 days to question Moro over the charges. If confirmed, Congress could begin a process of impeachment.

So far, 31 requests for impeachment have been submitted to Lower House Speaker Rodrigo Maia, including from members of Bolsonaro’s previous allies. But Maia has so far said impeachment is not the priority amid the coronavirus crisis.

Regardless, the turmoil isn’t likely to encourage the president to change his tone.

“Bolsonarism is a political ideology that depends on enemies. If they don’t exist, the president has to invent them every couple of days. In order to justify his behavior and mobilize his followers, he consistently needs new enemies and traitors.”

“Bolsonarism is a political ideology that depends on enemies. If they don’t exist, the president has to invent them every couple of days,” said Maurício Santoro, a political scientist at the Rio de Janeiro State University. “In order to justify his behavior and mobilize his followers, he consistently needs new enemies and traitors.”

This was again overtly clear when Bolsonaro ignored quarantine measures a week and a half ago and participated in a rally in front of the army headquarters.

AI-5 has been trending all day in #Brazil.

It's essentially what Bolsonaro's supporters called for today @ a rally in Brasilia attended by the president.@LemusteleSURpic.twitter.com/jLSXY6UypC

A few hundred of his supporters protested social restrictions and called for a return to the dictatorship and the disbanding of Congress and the Supreme Court — claiming that these institutions are actively working against the president.

“Now, the people are in power,” Bolsonaro told the crowd. “More than a right, you have the obligation of fighting for your country.”

Calls demanding military intervention aren’t new in Brazil, but Bolsonaro’s presence at the rally was a disturbing sign.

Bolsonaro is a former military captain who has praised known torturers and the military regime that controlled Brazil from the mid-1960s to the mid-1980s. He has more military officials in his government than any since the end of the dictatorship — a third of his cabinet members, including his vice president and chief of staff — have military backgrounds.

Related: Bolsonaro’s denial of coronavirus puts the country at risk

“There is much to be concerned about. There is always a type of military threat hanging over the heads of the Brazilian people. So, you live in a state of permanent siege.”

“There is much to be concerned about. There is always a type of military threat hanging over the heads of the Brazilian people,” said Emiliano Jose, a retired journalism professor, who was detained and tortured for many years under a dictatorship in Brazil. “So, you live in a state of permanent siege.”

The Brazilian dictatorship was a brutal period. Hundreds of people were disappeared. Thousands were imprisoned. Roughly 30,000 were tortured, according to a 2007 report from a government commission investigating state crimes.

In Brazil, the threat of military rule is never far from sight. On the night Bolsonaro won the October 2018 presidential elections, gun-wielding soldiers in fatigues celebrated by riding through the streets of Niterói on top of a procession of military transport vehicles.

Last October, the president’s son, congressman Eduardo Bolsonaro, told a reporter that if leftist Brazilians hit the streets in mass protests, the government would have to sink the country into a dictatorship, suspending habeas corpus and the rule of law.

This rhetoric actually goes over well with Bolsonaro’s supporters, many of whom look back on the military regime with nostalgia for what they call order and progress.

On the heels of military rule, truth commissions revealed the horrors of the past, but no one has ever been held responsible.

Related: Bolsonaro is still downplaying the coronavirus. Many worry about the impact on the most vulnerable.

Federal University of Santa Catarina Historian Cristina Wolff says this failure to confront Brazil’s dark history is key to understanding why many still feel empowered to demand its return.

“I do believe that this issue of never holding anyone accountable for the crimes of the dictatorship makes a big difference. Because in Argentina, where torturers were brought to justice, people could watch the trials on TV. The press covered it. So, the people had to remember.”

“I do believe that this issue of never holding anyone accountable for the crimes of the dictatorship makes a big difference,” she said. “Because in Argentina, where torturers were brought to justice, people could watch the trials on TV. The press covered it. So, the people had to remember.”

We are not likely to see tanks rolling on the streets in the coming days. But the strength of the military is expected to grow inside Bolsonaro’s government as it descends into deeper turmoil and attempts to battle the growing financial, political and health crises.

That, more than anything else, may be driving Bolsonaro’s rhetoric these days.